On Friday I passed the third and final part of my Jägerprüfung and can now apply for my Jagdschein! I can now call myself a “Jungjägerin,” which in direct translation is “young hunter.” The German concept has nothing to do with age, but rather refers to someone who has passed her test and earned her first Jagdschein. She keeps this name for the first three years of having the Jagdschein. It’s not an official or legal term, just a title used among hunters.

My first attempt at this three-day test was in early March. I did pass the written test and the oral-practical test, but I failed gun handling. My re-take was scheduled for May, but by then we were in full-blown Corona Virus mode and that test was cancelled.

The Waffenhandhabung & Schießen (gun-handling and shooting) test was at a Schießstand near Esslingen, and we – our Schießtrainer (RS), the four of us being tested and our spouses – all met there at 8:00. It was 11:30 before we were called up, so there was a lot of time to pace around being nervous. We all were, including our spouses, who didn’t let their nervousness show until we’d been called in! RS told story after story non-stop, and I knew he was trying to distract us from our nerves.

There were groups from several other Jagschulen there also, and one by one they emerged, some having passed and some having failed. The nice thing about being a non-native speaker is that I can easily block out what others are saying in German. If I’d heard how and why they failed (especially those who’d failed at gun handling), I would have been even more twisted up. I was never worried about the shooting disciplines because RS has been such a great teacher. He and another trainer at the Schießstand had helped us a lot (as in private lessons for several hours!) with gun handling also and we were all ready, but I already knew how quickly one can forget something and fail. The major mistakes are called “K.O.-Fehler,” “K.O.” meaning “knock-out.” An obvious example is if your booger hook is on the bang stick (finger is on the trigger) before you simulate a shot at a deer. To this day I keep my finger far away from ALL triggers, including on the gas pump when I’m picking up the nozzle to fill the tank.

I was the second of our group to be called up, and I entered the room where our six guns were lying on a table hoping I wouldn’t barf on the Prüfers (proctors’) shoes. There are two Prüfer: one gives me instructions while the other takes notes. Prüfer A said to me pleasantly, “So you are interested in hunting” but unfortunately I didn’t hear him well and had to ask him to repeat it. I then answered, “Actually in falconry, but that starts with hunting.” They indicated interest, and Prüfer A said, “Your native language isn’t German, is it?”  I said no, it’s English. He asked if I was able to do the whole test in German, and I affirmed that, adding that I never learned a thing about guns until I moved to Germany and only know the important terms in German.

Ok, so then off we went. Prüfer A wondered aloud which gun we should start with. The test requires that we train with four long guns, all different types, a pistol and a revolver. He said to me, “Should we go on a duck hunt?” Shit. I’ve practiced simulating shooting stationary land animals a lot, but seldom flying birds. I understood his question to mean “Are you planning on going duck hunting in the future” and started to answer, “Actually, I’d rather not. I will probably…” and then it dawned on me that he was politely starting the test. He chooses how we start, not I! So I recovered and said, “But if you say we’re going on a duck hunt, then we will!”

To cut this short, all four of us passed the Waffenhandhabung (gun handling) with flying colors, to the extent that the Prüfer told RS when he picked up the guns that we were an impressive group - we didn't make a single mistake! We also all passed the three discplines of shooting (all artificial targets!):
*A Treffer is a shot that counts based on the requirements for the test.

We toasted with a Schnäpsle (Ouzo, actually, because the restaurant at the Schießstand is Greek), profusely thanked our fabulous Schießtrainer, I sent a message to literally everyone I know who had wished me luck, and then M and I drove home as two Jungjäger!

Now just like M after he passed his Jägerprüfung in Saarland, RS lets me shoot a higher caliber with one of his guns! M took the photo above today, where I'm shooting at the running Keiler (boar) with the same type of gun I ordered for myself - a Heym SR-21, caliber .308 with a Schalldämpfer (suppressor).

Seriously, folks, this is something I could never have imagined myself doing - and enjoying! - even just a year ago! I genuinely look forward to our hours at the Schießstand, and now that I've passed my test the real learning begins. The goal is no longer to get enough Treffer to pass the test, but rather to learn to shoot well. Well enough, perhaps, to actually go hunting.

So tomorrow I will drive to Freudenstadt to apply for my Jagdschein, we will keep returning to the Schießstand, and also turn our focus at home to Falknerei, since our class starts in three months. 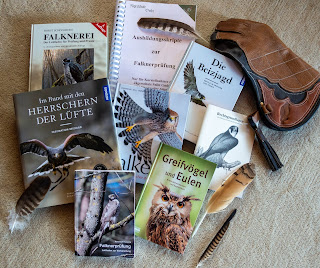 There is much yet to learn!

Update: I applied for my Jagdschein this morning (Monday) and M's was sitting on the clerk's desk (along with a bill for €200). She gave it to me so I was able to hand-deliver it to M on my way home! In about six weeks I should have mine as well.

Posted by Ami im Schwabenland at 18:08