I hope you all made it through the holidays with grace and joy! Welcome to 2020!

M and I enjoyed a quiet and stress-free holiday season with lots of delicious meals, no snow, hours of studying, phone calls with family members, and some tradition holiday movies: Dinner for One, Die Hard, Drei Haselnüsse für Aschenbrödel. There is also an astounding number of nature documentaries aired on German TV, which we watch with renewed interest these days along with Youtube videos about Waffenhandhabung and hunting.

Some of you know I love reading - historical novels, anything by Ken Follett, books about falconers and falconry... In 2018 I read the most books since I started counting, but 2019 ended with me having read only 12! That's not counting all the reading I have done for my Jagdkurs and Jägerprüfung, though. These days I'm reading descriptions of infectious diseases in wild animals, the original text of German hunting and nature protection laws, hunting magazines, details about the biology of wild animals including those we're not allowed to hunt and explanations of how different kinds of rifles and shotguns are put together and used.

To be honest with you, although (or perhaps because!) this is incredibly challenging, I am thoroughly enjoying it. I love learning! It surprises me that I even enjoy learning about guns and ammo, especially since I still don't plan on actually hunting, but so it is. Some people my age have a mid-life crisis, but that's not what this is. I developed an interest in Falknerei in mid life and I'm just pouring all my energy into learning everything I can and need to. A year from now I hope to have my Falknerjagdschein!

It was just about a year ago that our family friend and former Landesjägermeister and his wife drove me to the Landesjagdschule near the Bodensee for a Schnupperstunde. Schnuppern means to sniff around, and the purpose was for me to sit in on the class that was already in progress to see how much I'd be able to understand. I also met the Schulleiter  and main teacher, who was confident I would do fine. I should have been more realistic, but maybe then I would have lost my nerve.

I had serious doubts about having to "field dress" a dead animal and even more serious concerns about handling and shooting a gun (at a shooting range, NOT at real animals!). I went into this with less knowledge than the average German child in grade school gains by simply growing up in Europe and watching "Sendung mit der Maus".

What prior knowledge did I have that has been helpful this year?

Yep, that was about it. Here's a short list of things I didn't know and wish I had: 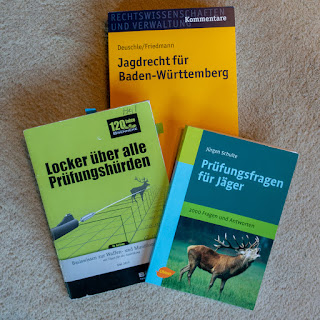 Jumping ahead to today, my best subjects are Waffenkunde (gun-ology) and Jagdrecht (hunting laws) - how ironic is that?!? On the first day of Jagdrecht in class I wondered how on earth I was ever going to learn the details of hunting laws here and be able to understand Juristendeutsch (German legalese), but by now I am pretty comfortable with the 250 questions about it as well as explaining how to handle certain situations. I can explain terms such as:
I'm told the average German might not be able to define all of those terms, yet by now they're not infrequent topics of conversation here in the evenings.

While M and I were studying on New Year's Day, he found one of my bookmarks from last spring. On it I had written "Büchse = rifle // Flinte = shotgun" and noted that a Flinte can be "broken" in half to open it. We had a good laugh about how far I've come. Nowadays when M explains something to me in English about guns, I have to interrupt and ask for the specific terms in German!

Anybody: "What is this?"

Me today: "That's a Gamsbock. It's a Bovide, meaning both males and females have horns that they don't shed. The males' horns are more curved than the females' and their base is round whereas the females' horns are oval. Their Paarungszeit is in the winter (Nov/Dec) and the Kitze are born in May/June. The males are territorial during the Brunft and they live in the Alps, Bavaria and in the Schwarzwald. They're Mischäser and have 32 teeth."

Anybody: "What's it called in English?"

I'm also using an online trainer to prepare for the written test. That test is multiple-choice, but there are anywhere from 2 to 6 possible answers and any number from 1 to 3 of them can be correct, though it never happens that all answers are correct (that doesn't apply to the online trainer, only to the real written test). 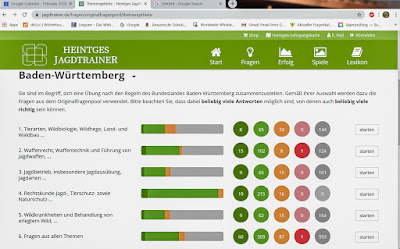 On this screen shot you can see the 5 subjects I'll be tested on. Very roughly for those who don't know German but are curious:
The green circles show how many questions I've gotten right, orange and red show how many I've missed (red = repeatedly wrong), and grey shows how many questions in that category I have not yet answered in their system. I've answered all the law-related questions and score in the 84-87% range.

Quick life hack if you ever find yourself taking a multi-choice test: If you truly have to guess because you don't know the answer, go for the longest one. This is a tip I've known forever and it has rarely failed me. Turns out it's not just for tests in English!

The written test should be no problem in the end with continued hard work. For the shooting bit M and I continue to spend many Sunday mornings and Wednesday afternoons at the Schießstand in Stuttgart practicing the disciplines we'll need to master for the shooting test. I still need some review and practice with gun handling because in that part of the test I have to prove that I can handle several different types of long guns, a pistol and a revolver without making a single mistake.

My real concern is still the oral test, in which I'll be tested on all of the above topics but in the form of an interview, and I'll have to answer and explain my answers in coherent German.

Here's one example (in mostly English):
"You are on a hunt and have shot a Rehbock (roe buck) who gets up and runs into the farmyard of a neighbor of the Revier (hunting ground). What do you do?"

"The law prohibits hunting or firing a gun in a farmyard (that is a befriedeter Bezirk). However, in order to spare the already-shot deer from additional pain and suffering, I must follow it and put it out of its misery, for instance with a Fangschuss with my pistol as long as the energy at the point of leaving the barrel is at least 200 Joule. If the Rehbock is on pavement I cannot use a gun because of the danger from a ricocheting bullet, so I need to use my Waidblatt (large knife) to kill it" [as I learned and practiced in my hunting class - I have a photo, but I'm not posting it here].

I also need to be ready to list 7 diseases that can be passed from animals to humans, which diseases are viruses, which are bacteria and which are parasites, when 25 different wild animals have their mating season, which trees and plants are appealing to roe deer or red deer, how, why and when to einstech a Drilling, which wild animals are under Naturschutz, which dog breeds are best for which type of hunting, ammunition caliber in American and European measurements, and and and... 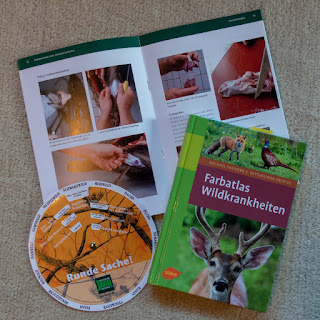 But I'm not complaining and I have all the books, brochures, charts, and videos I could possibly need to prepare for this. And I have M. He has helped me so much with language and details, and since he decided to go for his Jagdschein as well, I've been even more motivated!

I spend much of my time studying and reviewing. Now and then I'm interrupted by things like grocery shopping, laundry, and emails (or blog posts), but I don't leave the house without one of my study books to read while on the train, standing in line, or waiting for my turn at the running Keiler at the Schießstand.

And with that it's time to get back to the books!

Posted by Ami im Schwabenland at 20:06 No comments: