I love our local butcher. The women who work there are so friendly, and very patient with me despite the fact that I often come in with unusual requests or forget a word I need to make clear what I want.  They know me somewhat by now because I go there about 3 times per week, and sometimes I fear they're thinking, "Oh no, here comes the American again..." 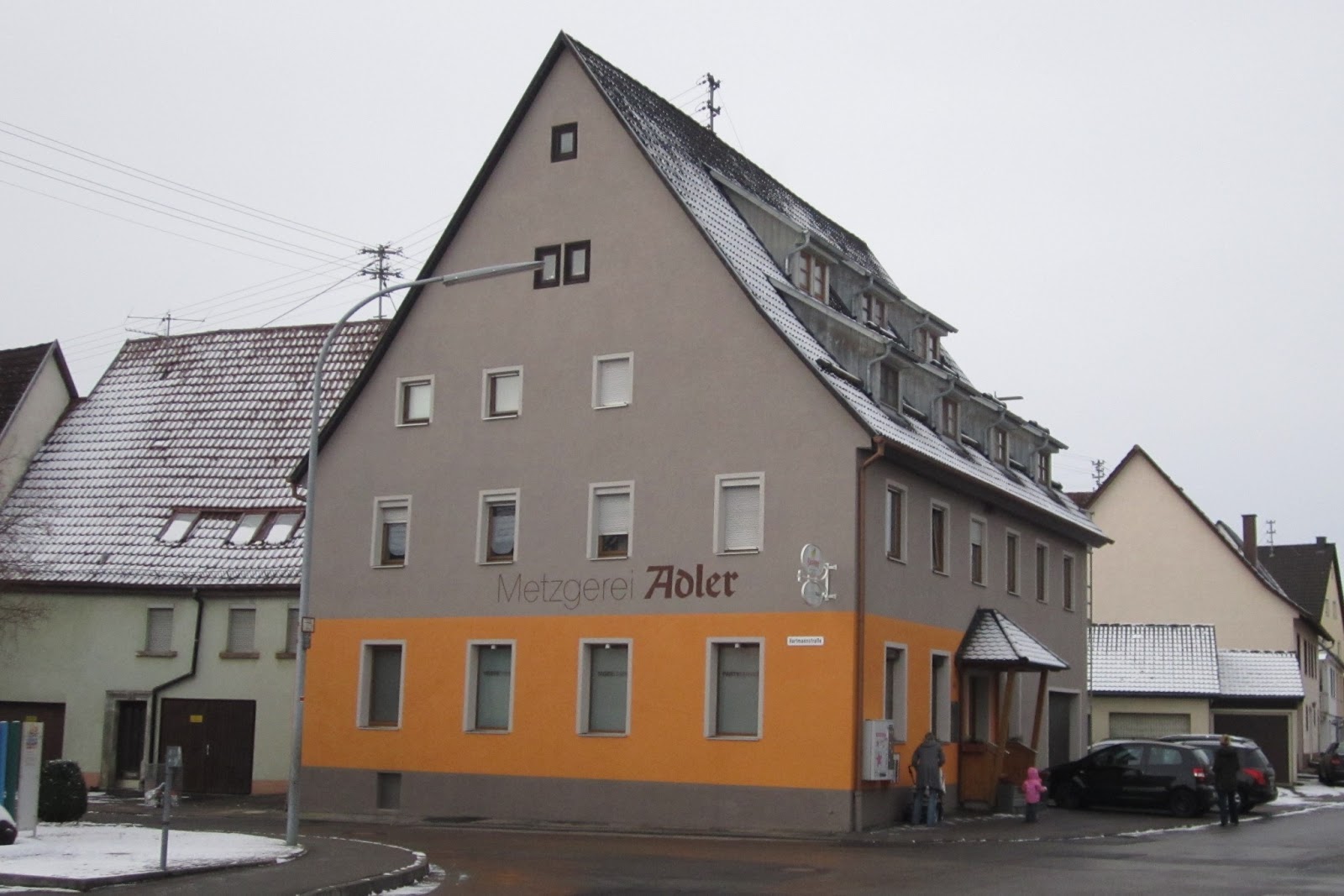 For some time I've been perplexed by the size of the chickens here. They look more like hefty pidgeons, and the biggest one I can find at the grocery store feeds just Martin and me for one meal. On Monday I'm planning to cook a bird for my parents and us.  A friend told me recently, when I brought up the "tiny chicken issue," that I need to look for a Poularde (spring chicken?). Those are larger than the grocery store birds. This morning I asked the butcher if I can order a Poularde from her. She said "Für Weihnachten?" ("For Christmas?")  "Nein, für Montag" ("No, for Monday"). It turns out I can get a Poularde, but I need to order it a week in advance. It looks like I'll be roasting 2 small grocery store birds on Monday, but at least I know for next time.

There is a meat department in the big grocery store, but Martin is always more impressed with the quality of the meat I get at the local butcher. When I go there to get gemischtes Hackfleisch (mixed ground meat - pork and beef), they grind it as I wait. It doesn't get ground early in the day and then sit in a display case for hours, like in the grocery store, and it's not pre-packaged. They grind exactly as much as I want and then package it. I believe this is why, when making Maultaschen, it's ok to taste the ground meat mixture repeatedly to see if the spices are right, even though the meat is raw. 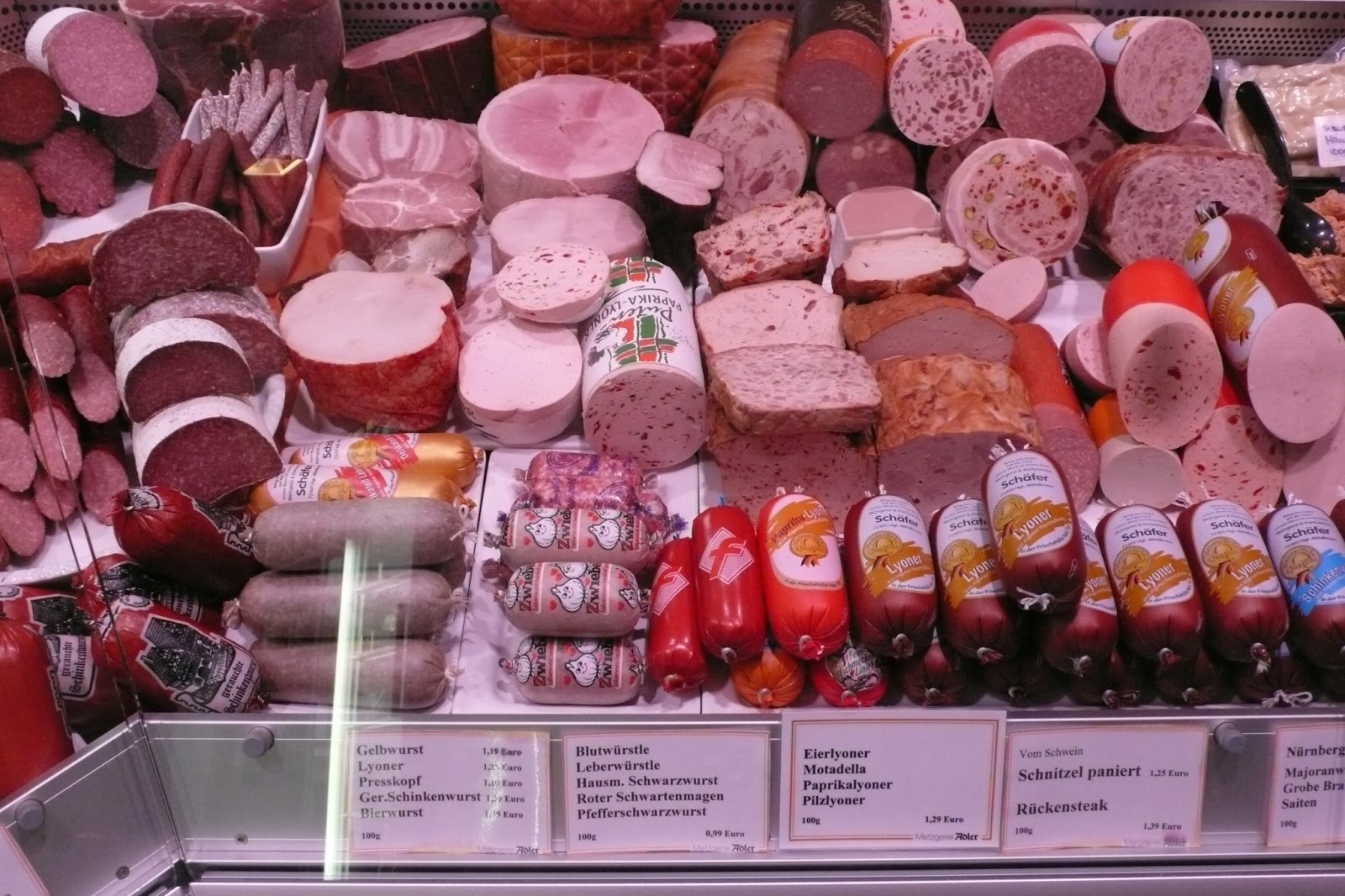 The butcher has a delicious array of sausages and cheeses for sale, Wurstsalat and other salads, marinaded or prepared meats (I could buy Schnitzel already flattened and breaded, but Martin always does that himself) and some poultry. They also have a few staples available - eggs, breadcrumbs, canned broth, etc. A bakery from the next town over delivers bread and rolls daily, and one can order a sandwich to go. They also have a daily meal special of a meat, a side dish and dessert or salad. There's one small table where one can sit and eat lunch.

So far perhaps none of that is terribly different from an American butcher. The big difference is that I rarely went to a butcher in Wisconsin. The best one I knew of near me was a 20-minute drive away in Eden, WI. I just bought packaged meat at the grocery store.  Life in the U.S. is in some ways about convenience and quickness. The meat tends to be better at a butcher, but it's more convient (not to mention cheaper) to buy everything at the same place. The same is true here, but since the butcher is so close (it's a 10-minute walk from home, or a 7-minute walk on a day as cold as today) and the meat is a finer quality, I'll happily go there several times a week even though it's an extra trip. 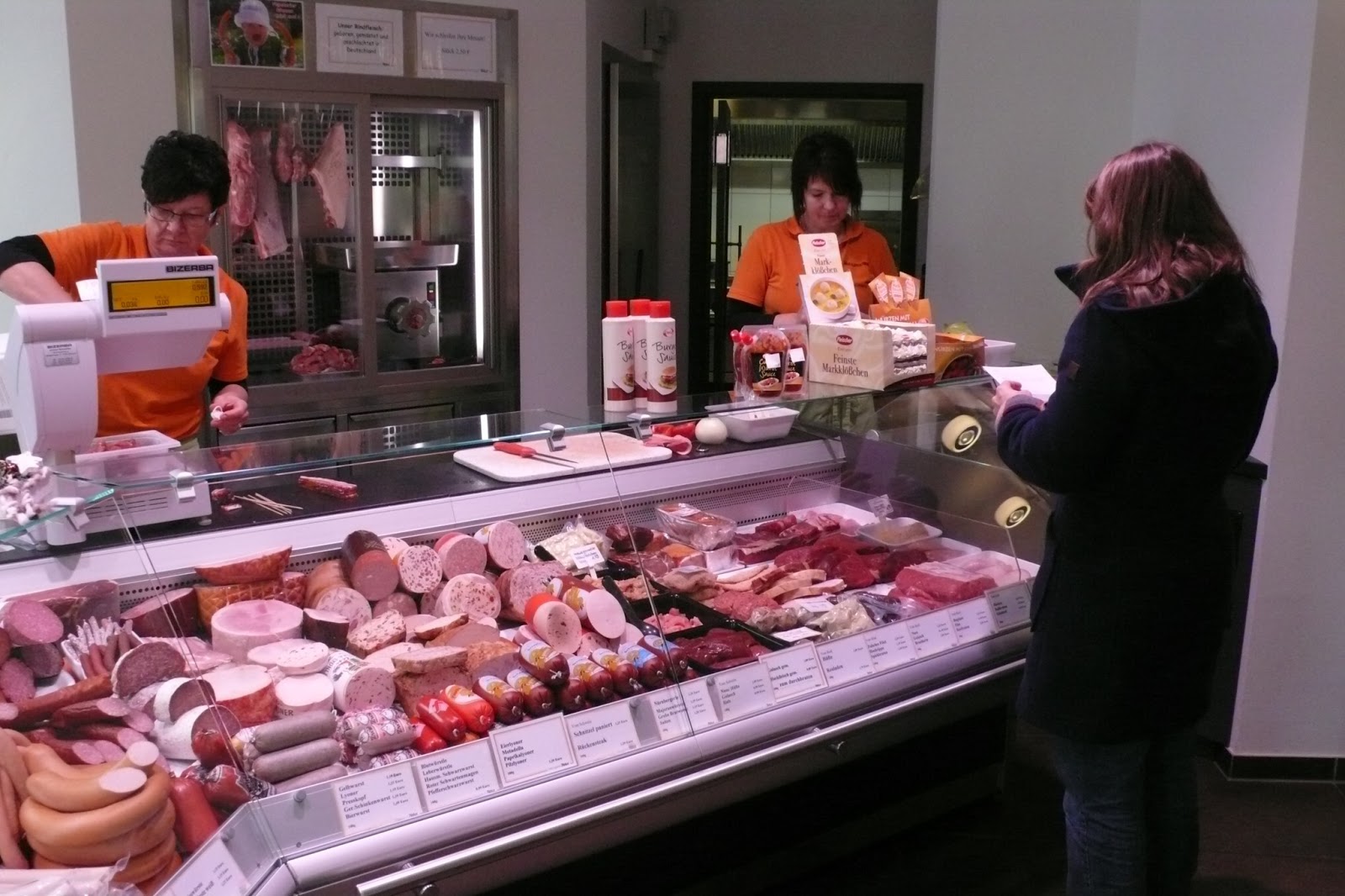 I should mention that the butcher at the grocery store is very friendly and helpful as well. A few weeks ago on a Wednesday Martin wanted to grill steaks, but the local butcher is closed on Wednesday afternoons.  Martin - who is German for those who don't know that - often grumbles that German butchers don't understand about grilling big steaks, because they're always cut too thinly.  I asked the butcher at the store for Rindersteaks zum Grillen, and he said those are in the pre-packaged section. He mentioned that they are "Big American Steaks," (is it SO obvious that I'm an American??) and asked if he should help me find them since he wasn't busy at the time. I said I was sure I could find them myself. I went to the beef section, walked along and browsed, but didn't see exactly what I was looking for. The butcher came over and asked if I'd found them, and I had to admit that I hadn't. He reached into the cooler and pulled out a package with a huge American flag on the label. Really? I missed that?  Good grief...  They were still not thick enough for Martin's taste, though, so there was more grumbling at home about German butchers.

One of these days he'll come with me to our local butcher and describe exactly what he wants for grilling - 4 cm thick, marbeled, and from the loin or rib. Then we'll see if they'll give it a name - "The Hejl Grill Special" or something like that - to make ordering in the future easier.

We're planning on having a 4th of July Grillfest next summer, and the butcher is either going to love us or hate us when it's time to order the meat for that. Yes, we'll be ordering a lot of meat, but we'll have very precise expectations for what we want.  At least we know to order early!
Posted by Ami im Schwabenland at 12:38 1 comment: