Fasnet is the Swabian word for Fasching/Karnival, and this weekend is high season for shenanigans. I always intend to research the historical traditions behind this springtime custom of chasing away the demons of winter, but so far I haven't got around to it. Seeing as the whole business involves a lot of people, a lot of drinking, and masks, it's just not my scene.


This Thursday is Schmotziger, which I've learned doesn't really mean "Dirty Thursday" (though that fits in a way, too) but rather probably comes from the word "Schmalz," which is fat or lard. Around this time it was - and still is - popular to eat sweet and fatty foods to get ready for the fasting time of Lent.

Enthusiasts say Fasnet or Fasching is not just about getting drunk, and I'll believe that. However, this week's Real ad brochure begins with beer, more beer, Jack Daniels and Coke in a can, Schnaps, vodka, Sekt (sparkling wine), beer glasses, glass boots, and a beer barrel carousel. The seasonal section, closest to the entrance and the cash registers, is full of alcohol and costumes. 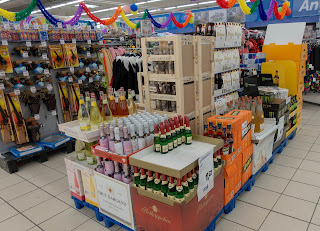 This week's Blättle (local newsletter) is full of info about where to find the parades and parties as well as reminders to be sensible and clean up after your damn selves. Vergebens (all for nothing). It generally takes a good week for all the filth in the streets, parks, and public areas to be cleaned up by city workers or to blow away. Broken bottles, crushed cans, empty beer cases, confetti and candy wrappers from parades...

There are also two articles in the Blättle about Jugendshutz (protection of youth), which involves laws but mainly protecting young people against their own dumbass decisions. We are reminded:

Several of the stores in our town are participating voluntarily in a program called the "Rottweiler Idee" (Rottweil* idea) which hopes to dimish the incidents of young people drinking to the point of alcohol poisoning, which I applaud. At the same time, I realize that a wee bit of planning ahead (and most Germans are masters at this) circumvents these noble efforts. According to the article, local incidents requiring police intervention during Fasnet have decreased since the Rottweiler Idee was implemented.

*Rottweil is the Swabian hightown of Fasnet. Köln holds this fame to the north, but down here Rottweil is the place to be to celebrate the most traditional of Fasnet gatherings, parties, and so on.

What the stores in the vicinity of the Bahnhof have agreed to is not selling hard liquor to persons under the age of 25 on three upcoming days of drunken foolery: Schmotziger, Fasnetssamstag (Saturday) and Fasnetsmontag (Rosenmontag - the Monday that is the highlight of the Fasnet madness fun). Sunday doesn't need to be on the list because all stores are closed every Sunday.

Our town has been doing this since 2014. The store M and I use most often, Real, is not participating, unfortunately. This store is not near the Bahnhof, but its neighbor Norma is participating and I wish Real would, too. The kids can still buy beer, wine, and Sekt and can do plenty damage to themselves with those, but limiting hard liquor is at least something.

I'm not a teetotaler and don't judge people for including alcohol as part of a celebration of whatever kind. I even think the U.S.'s drinking age of 21 is a bit silly when kids at 18 can serve in the army. Alcohol is part of German culture, and having a glass of wine or beer with lunch - even at a business meeting - isn't unusual. I just applaud the idea of (voluntarily!) making it as difficult as possible for young people to binge drink themselves into a coma or worse. The cut-off age of 25 is probably bit harsh, but I don't have a problem with it during the craziest days of Fasnet. The scariest thing is that there is surely plenty of drinking and driving during these days, and since Germans can drive as of age 18 but lack experience and judgement, the Rottweiler Idee could be intended to address this danger as well as to limit the ability of already wasted young people from buying even more hard liquor.

Whatever your plans for the days of Fasnet, Fastnet, Fasching, or Karnival, stay safe and make good choices! And for mercy's sake, don't drink and drive!!!

Posted by Ami im Schwabenland at 13:44 No comments: