Bildechingen is a very small village of 2200 inhabitants. The closest bigger town is Horb, which has 6000 inhabitants, and it takes about 5 minutes to drive there by car. Horb is down in the valley, and Bildechingen is on the top of the ridge overlooking the valley.  There is a shopping area about 20 minutes away by foot, where one finds such businesses as Real (a super center with just about everything plus a grocery store), Norma (which is like Aldi), a hardware store, a garden center, two car dealerships, a beverage market, a pet store, a saddle shop, and a McDonald's.  Down in Horb there are several grocery stores, pharmacies, banks, cafes and clothing shops, a flower shop and a bookstore, and quite a few restaurants and pubs.

Germans are very proud of their bread, and rightly so. Unfortunately, though, as has happened in the States, the small local bakeries are having a hard time competing with big we-have-everything stores, especially in smaller towns where people have to drive to a grocery store for most of their purchases anyway. At the big stores the bread, pastries, rolls, and cakes arrive in bulk frozen and are baked in their ovens. It tastes fine and it will do, but it's a treat to go to a real bakery, where the baker makes his own dough, pie crusts, and cakes from scratch.

We don't have a bakery in Bildechingen or in the shopping area 20 minutes away.  We have something better. Every Wednesday morning a van drives into our neighborhood and stops right in front of our neighbors' house!  The driver honks the horn to let us know she's there and opens up the side of her van like a kiosk. She has loaves of many different kinds of bread, rolls, baguettes, pastries, big pretzels, and a few cakes. 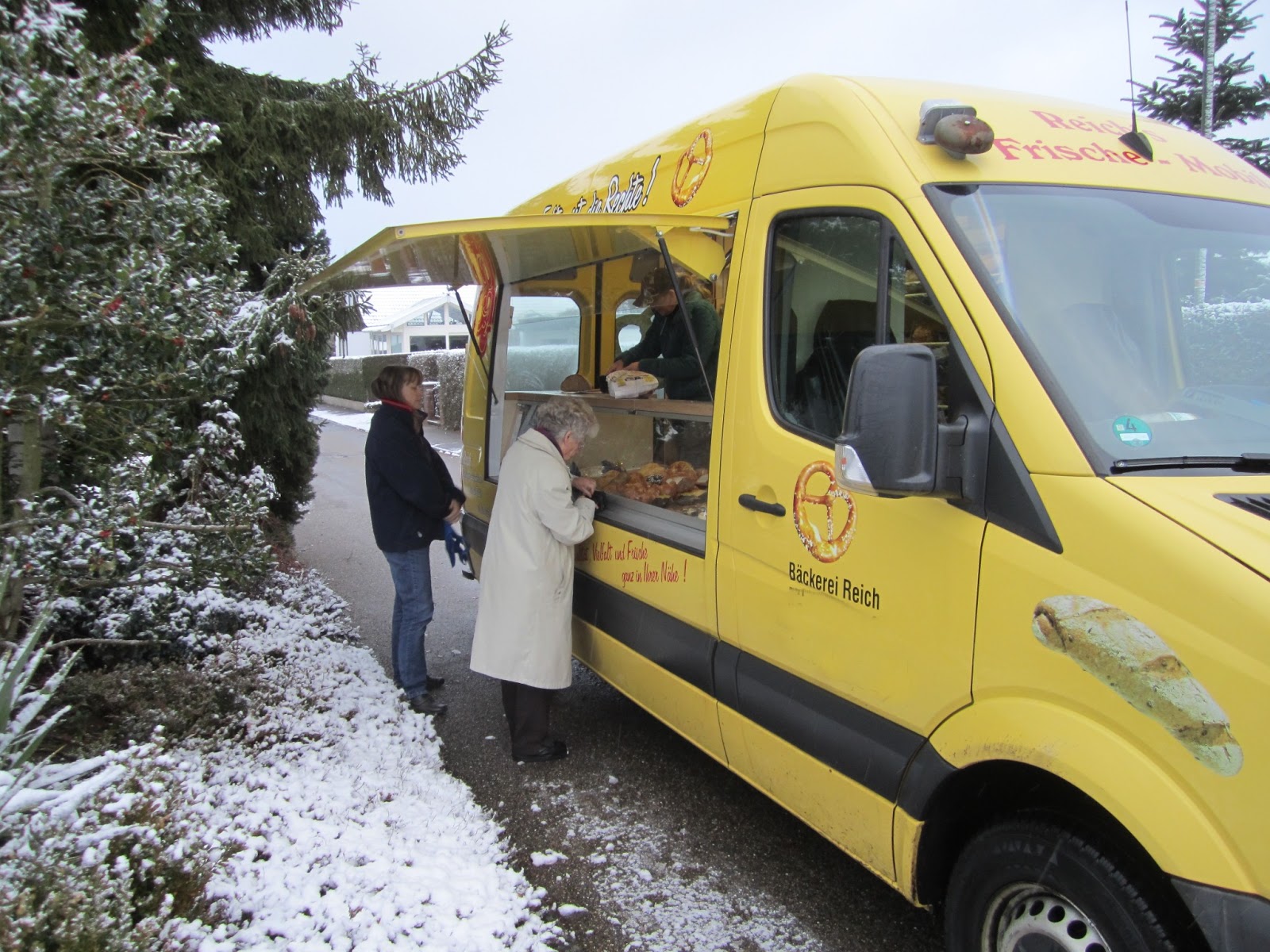 I can't believe my luck! This van doesn't stop down the street or around the corner - it's 10 paces out our front gate.  She arrives in the morning around 8:45, which is right around the time I get hungry. My biggest challenge is going to be holding back and not buying too much.

Every Tuesday evening around 7:30 there's a fruit and vegetable truck that does the same thing, and we'll happily support this farmer's business as well. I don't get quite as excited about healthy veggies as I do about bakery, but I definitely appreciate the convenience.

I am very happy to support the local farmers, butchers, and bakers, even if their prices are a little higher than in the big chain stores. The food is better quality and fresher, they appreciate the business, and they're very friendly. The baker this morning asked me if I'm new here (today was the first time I saw the van - I don't know how I've missed it in the past 4 weeks!). As I left with my treasures, I said "Auf Wiedersehen; Bis nächste Woche!" ("Good bye; see you next week!")  She will definitely see me again next week and every week after that.
Posted by Ami im Schwabenland at 15:43 No comments:

Things to Get Used to 2: Doing Laundry


Another thing I'm glad I knew better than to take for granted while living in Wisconsin was the ease and speed of doing a load of laundry. I don't know how the high-efficiency washers and dryers work in the States, but I had to listen, watch, and take notes while Martin did a few loads in order to get down the steps of doing laundry here.

Just to compare, I'll start with the 6-step and 4-step processes with my machines in Wisconsin, followed by the processes here.

The usual load took about 45 minutes.

Using the dryer in Wisconsin:
1. Transfer clothes from washer to dryer.
2. Set dial to the mark between "drip dry" and "very dry".
3. Clean out lint trap.
4. Push "start".

A normal load takes 2 hours 45 minutes in the washer.


Even though the washer takes much longer, less water is used. The water comes into the washer and the machine spins the clothes once or twice, and then the clothes sit for a bit. Then the drum spins again, and the clothes sit for a bit. Apparently it costs less than 20 cents to run a load, considering water and energy use.  But if I don't put the load in before dinner, I'm going to be staying up late!
Posted by Ami im Schwabenland at 11:43 No comments:


We live in the southern German state of Baden-Württemberg, in the area called Swabia.  Entertaining and informative books have been written about the Swabian people and their quirks, characteristics, dialect, and habits.  Swabian frugality is legendary, and they are also known for their orderliness, even more so than the average German.  If I ever write a book about immigrating to Swabia, I think I'll start with the garbage sorting.

Then there's the Biomüll (biodegradable waste). That's a small brown bucket with a lid, lined with a paper bag and newspaper on the bottom to absorb moisture.  Into this container goes food and garden waste, paper towels, toothpicks...anything that can biodegrade.

There's also a small Hausmüll (regular garbage) container for things like used tissues (though I think those could go into the Biomüll), diapers, cigarette butts, dental floss, and basically anything too gross to go into one of the other containers. One can purchase from the city (for 5 EUR each) specially marked small additional bags to put next to the garbage bin on collection day if one has more garbage than one should.

The last container we have in the house is for Altpapier (waste or scrap paper).  Newspapers, magazines, store receipts, junk mail, small pieces of cardboard, etc. go in here.

It doesn't end there. One can't throw glass bottles or jars into any of the above containers. Once a week or so I walk a bag of these items several blocks to the public recycling center, where I throw them one by one into containers separated for color. This must NOT be done on Sundays or holidays, however, due to the noise disturbance of crashing bottles. 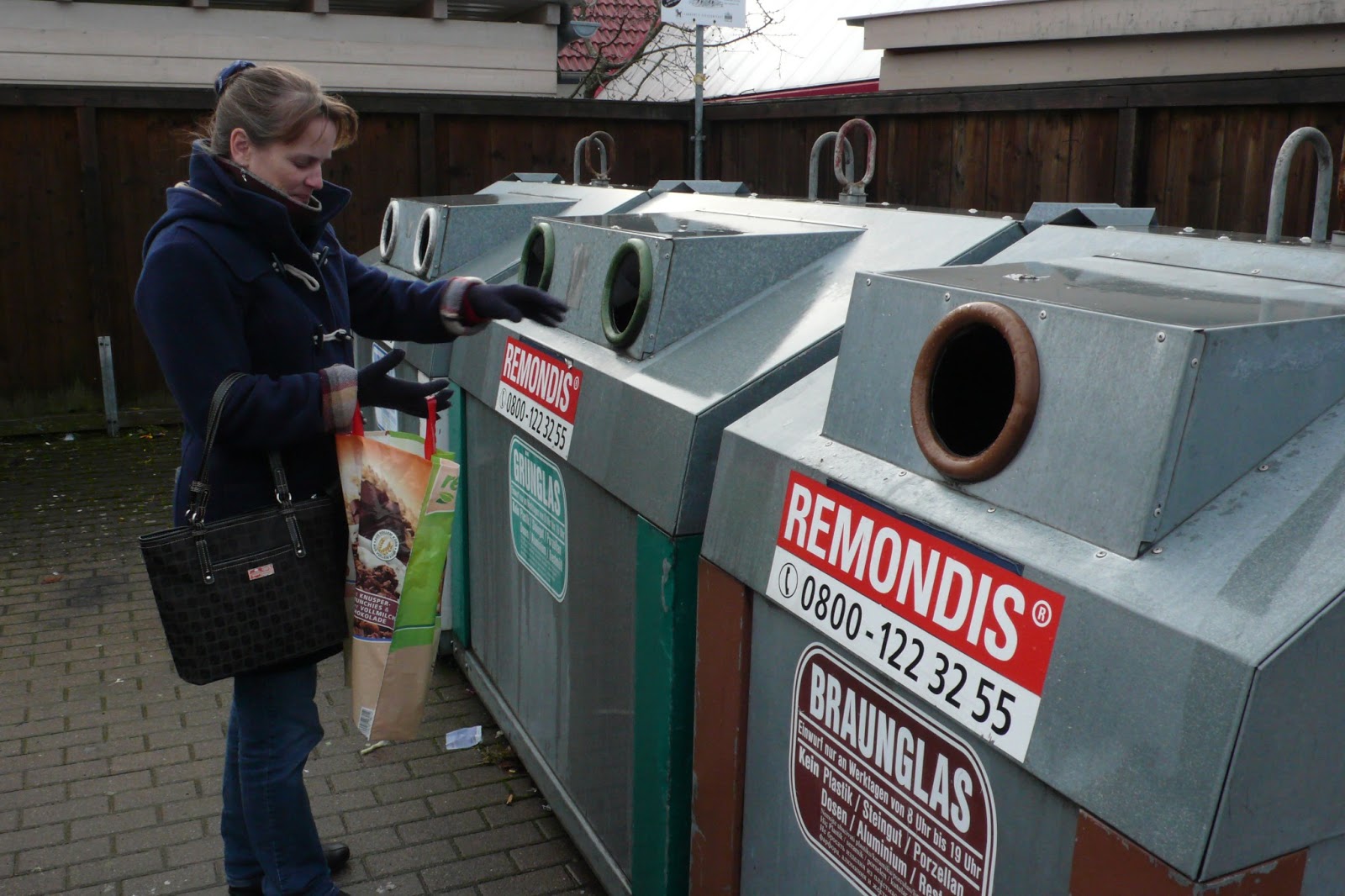 Crates of beer bottles can be returned to the store where we bought them and put into a machine that spits back Pfand (the money we paid on deposit when we bought the crate). The other day we got about 14 EUR back in Pfand for returning several months' worth of stored up empty bottles.

For years I've had to ask Martin which garbage to use for various waste. Sometimes he's not even sure! In Esslingen rules for the Biomüll are stricter than here - egg shells can go in, but not eggs. Raw meat scraps can go in, but not cooked. Luckily for me, it's easier here in Horb and I have lists printed showing me what goes where in case I'm in doubt.

Woe unto you if you put out the wrong garbage; they won't take it, and you're stuck for another month with your old garbage in a container that's already full plus the new stuff.  If that happens, I think it would be best to go on vacation for 4 weeks, which of course you can't because then you'd miss all the other collections as well and be no better off.

This is the way it is here in Swabia, and there are no apologies or reasons to complain.  I've been somewhat familiar with the system for enough years to never take for granted the simplicity of garbage collection in Wisconsin, which would make most Swabians snort and shake their heads: two containers - one for garbage, and one for all recyclables. Garbage is collected every Friday, recycling every other Friday.  Among the Swabian quirks and characteristics, one will not find "simplicity."  :-)
Posted by Ami im Schwabenland at 11:09 No comments: