M and I went on a Treibjagd today - my first - and my general feeling afterwards, now that I'm warm and dry again, falls somewhere between "That was a really cool experience" and "What the actual hell did I just do?!?!"

We had been pleased to hear last night that it wasn't supposed to rain today, because we already knew it would be cold. Not Wisconsin cold, but cold enough to bundle up in layers, winter socks and toe warmers. Cold is doable when you keep moving, but cold and wet - no. Just...no.

We got up at 6:00 am, loaded up the car with an extra change of clothes, socks and boots, several toe and hand warmers (not enough, as it turned out), brauchbare Messer (useful knives) of several sizes, two cameras, a tarp to keep the trunk clean afterwards, and 8 Snickers bars. We left home at 7:30.

It started out to be a lovely morning, actually. The overnight rain had turned to snow south of us, and the heavy new snow looked beautiful on the trees and in the fields. 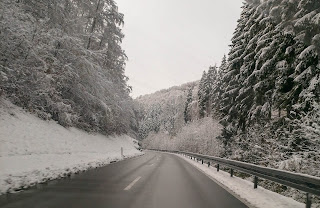 Approximately 2.5 hours later that damn snow was neither lovely nor beautiful.

We gathered at the meeting point, located my Jagdkurs instructor, signed in, and stood around wondering what would await us, still dry and warm enough. I had on my hiking pants under my thick hunting pants, regular socks, toe warmers, thick winter socks, and rubber wellies. On top I had a turtleneck, a t-shirt, a warm sweater, and a big thick fluffy hunter-green jacket. Two pairs of gloves and hand warmers tucked inside. 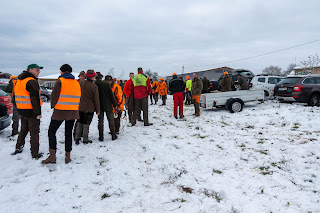 What I knew before the Treibjagd:


We learned after the Jagdhornbläser welcomed everyone that the open animals were roe deer of any age, wild boars except sows with fresh babies, foxes and Marder (martens - like weasels). The Jagdleiterin also reminded the hunters to always shoot "young before old"  - if a doe is with a Kitz, the Kitz is shot first before the doe. This is more humane because the doe can survive alone but the Kitz could not. (It's unlikely there would be young Kitze at this time of year.) Lastly she told us that an article had been written about this upcoming Treibjagd in a local paper, which can always mean the appearance of Jagdgegner - opponents of hunting - who show up and try to disrupt or prevent the hunt - which is illegal, just in case it sounds like a good idea.

We were assigned to two experienced hunter-Treiber, who gave us further instructions and led us to our starting point. We formed a line of four Treiber and we were to tromp along, shouting "HOPP-hopp-HOPP" every 10 seconds or so to both flush the game and keep the four of us aware of where each of us was. We were to plow through whatever came into our path - thickets, blackberry patches, brambles - and just keep going. 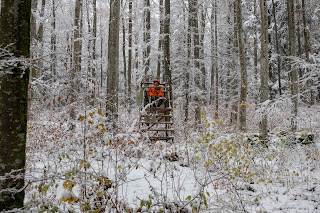 The hunters were perched in Hochsitze with their Büchsen (rifles), ready to shoot whatever game the Treiber and the dogs flushed out of the forest. I asked Andrea for assurance that they would not aim or shoot into the area we were. She gave it, and I pretended to be convinced. The hunter in the photo above was the only one I saw (before the hunt started at 10:00 sharp). I also didn't see any wild game. I did see a hare bound away, but they weren't on today's list. 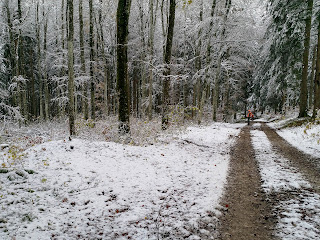 This was my starting point, and you can see M in the distance down the road in orange. This was the last photo I took because I had a job to do. Aww, look at all that lovely snow. What a nice foresty atmosphere!

After our first tromp we stopped briefly at a forest path to re-group, and I said to M, "Well, at least my feet are still dry." That's when I felt the wetness from my pants (trousers, for you British readers) start dripping into my wellies. 20 minutes into the two-hour hunt I was soaked through to my skin and my feet were swimming in my boots. Although it wasn't snowing, the wet, heavy new snow was throwing itself to the forest floor with reckless abandon making a loud squashy PLOPP with every slight breeze. I was wearing a bright orange baseball cap and was glad I hadn't worn one of my warmer knit ones. I would have lost that in my first fight through the young Buchen (beech trees) thicket and it would have been soaked through and useless anyway. My hair was dripping, as was my jacket, and every time we paused I wrung out my gloves. I was pleased I could still feel my fingers.

In case that hasn't quite sunk in yet, we were WET. soaking, dripping wet. On a chilly winter's day (a few degrees above freezing) trudging through a forest. The melted snow that had slammed us from above was running off our jackets onto our pants and into our boots. Every bit of us was dripping or sloshing. I learned a new Swabian word today: seuchnass, pronounced "seichnass" in Swabian. "Seuch" comes from Seuche, which is a pestilence or plague, and seuchnass means "pissing wet". That feels about right.

You might think that we chose poorly when getting dressed, but Andrea and the other Treiber with us are experienced hunters and were just as wet and miserable. I did have waterproof pants (again, Brits - trousers) in the trunk that I wear as an emergency top layer in Scotland while hiking when we get caught in a downpour, but for whatever reason I thought (back when the snow was still pretty) I'd be ok. I will sure as hell wear them next time.

Oh yeah - did I mention that? We're doing this again in December.

After 90 minutes we had swum back and forth through our assigned area of the Jagdrevier dodging plopps and getting smacked in the face repeatedly by tree branches, and we were back at the cars. I thought that was a cruel joke because I wanted nothing more than to strip off my soggy clothes and drive home - naked or not, I cared only about setting my ass on the heated seat. Angels sang when I realized that Andrea and Dieter were done with this shit too, and she said if we had dry clothes in the car we should change into them. Thank goodness we brought as much dry clothing as we did (still it was not enough, as I had a sweatshirt but lacked a dry jacket), because for the next hour or so we stood around in the cold, wet forest at the Jagdhütte waiting while the butchers did the Aufbrechen, the dogs shivered, and the hunters exchanged "Waidmannsheil" and had some beer.

While at the Jagdhütte, M and I were standing together and talking in English. A young lad, whom I'd photographed earlier with one of the Jagdhunde, was near us and asked me, "Are you an Englishwoman?" I smiled and said I'm from the U.S. We had a nice chat and he asked to see the photo I'd taken. I was truly impressed with this 11-year-old who was not shy at all about chatting up a stranger in a foreign language! I told him this was my first Treibjagd, he told me he'd done it before. I asked if he knew how to say "Treiber" in English, and his younger brother standing behind him said "Try-Burr" with a spot-on American accent! 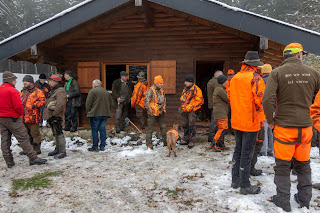 In the end for this many Treiber and Jäger despite the "schönes Jagdwetter," the Strecke wasn't very fruitful: 1 fox, 2 wild boars, and 12 roe deer. As tradition demands, the Jagdhornbläser stood together and honored the kill and the hunters with a song. Normally all the animals are laid on the Strecke, but this time they had a representative sample.


The man in charge then gave a brief speech first thanking the Treiber - I guess everybody knows what a shit job that is - then the hunters, the Hundeführer (dog handlers) and the Jagdhornbläser. With frozen toes we returned to our muddy car and drove back to the meeting point where there was a restaurant ready to serve us lots of hot food and drinks. This is called the "Schüsseltreiben." 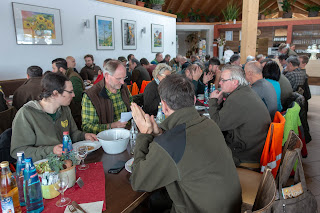 There were about 100 people involved in this hunt, from the looks of it - mostly men, but quite a few women as well. We all ate heartily and enjoyed the Gemütlichkeit - but especially the dry warmth inside!

So my first Treibjagd is behind me. Despite the cold wet misery, the terrain we had to stomp through was not as difficult as it will be in four weeks. We've driven through that Revier with the hunter organizing the Treibjagd, and damn... straight up and straight down would be an exaggeration, but only a slight one.

We drove home and enjoyed the late afternoon sun and lack of snow. M hosed down the filthy car while I threw everything we'd worn today into the washer. 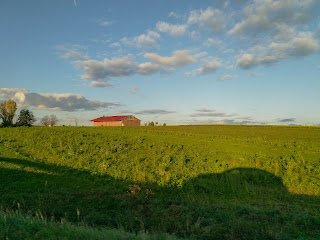 Many hunters, when asked why hunting is their passion, say they have always loved the outdoors, they enjoy being out in nature, and they find solace in the forest. I would like to be like them.

I prefer curling up on my sofa under a thick blanket - a thin one in summer - reading a book. I do love hiking in Scotland with M and taking long walks in the valley near our home. I enjoy photographing wild animals and birds of prey and bad weather doesn't put me off too much.

But I learned today that I do not like walking through the forest on a cold day with half a pond in my shoes, and I have always hated being cold. As I wrote earlier, cold and wet - NO!

So why on earth did we do this and are doing it again in four weeks?!?

This is part of our hunter education. We need to learn about Treibjagden and answer questions about them, so we agreed it's best to get first-hand experience. We need to understand how the Strecke is laid, and seeing that for real rather than in books is helpful. We also learned today how not ok it is for a hunter during a Treibjagd to shoot an animal that has not been "freigegeben" - declared open. Someone had shot a hare, and although it was lying on the Strecke at first, it was removed before the ceremony started and talked about in disparaging words afterwards. Seemed like just a mistake to me. It's not that hares are not in season, but rather the person in charge had not given clearance for hares to be shot today.

I might have neglected to mention here on the blog that M has decided to go for his Jagdschein as well. It makes sense - I have asked him so many times for help with understanding concepts and words I don't understand, which means he's basically studying with me.

So now we're doing this together, and I'm enjoying it even more. Except for the pond-in-the-shoes thing.

Posted by Ami im Schwabenland at 20:16 No comments: