This post started out as a brief description of a wonderful meal we ate yesterday, and it became a long "I LOVE this restaurant!" post instead.

For M's birthday this month I of course made a reservation at our favorite local restaurant, where the Chef/cook/boss/owner and his wife know us well. He greeted us before we sat down and said he had something special to prepare for us if we were interested, and it was "Wild." Wild means it is either venison or wild boar, and M told the chef a while ago that he should let us know anytime he has Wild, and we'll come if we can. The chef knows a hunter in this area, and so the Wild that comes to the table here is local.

(If you are a vegetarian or vegan for moral reasons, you may want to skip the next few paragraphs, but for more about the restaurant, start again at the paragraph just above the buffet photo.)

M and I indicated our interest, and the Chef (which appropriately means "boss" in German, but he's also the chef) said when he saw we were coming he saved for us a Kitzrücken. I know that Rücken means "back" (tenderloin, usually), but I didn't know the word "Kitz." I looked quizzically at M, and both he and the Chef said at the same time, "Bambi". I've heard people jokingly refer to venison as "Bambi," but I know the German word for venison. It starts with Reh- or Hirsch- normally. So I realized right away that they meant young deer, or fawn. Without hesitation and without hearing the accompanying side dishes, we told him we'd be happy to have that. He said he would get it started because it needed time to rest in the oven.

We sat down and ordered a bottle of water as we always do and two glasses of Sekt (champagne, for simplicity's sake) to toast M's birthday. We told the hostess (the Chef's wife) we didn't need menus. We each had a salad following some slices of baguette with their homemade herbed olive oil.

The Chef brought out the cooked piece of Bambi Kitz on a platter with a sprig of rosemary garnish to show us before he plated it. It looked and smelled divine.

This is the delicious little devil: 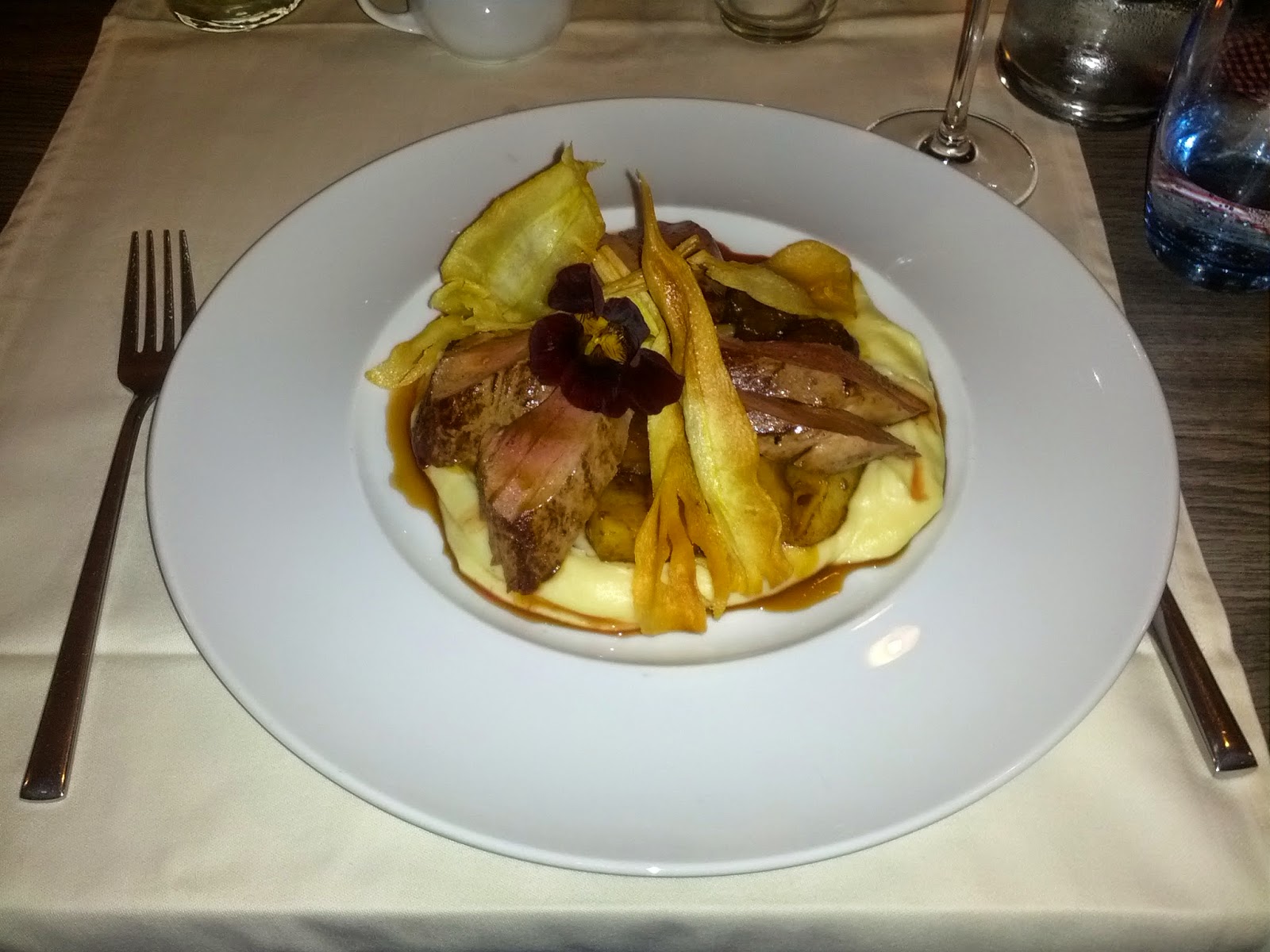 What you see is Rehkitzrücken mit zweierlei Pastinaken und Maronenkartoffeln, or young venison tenderloin with parsnips prepared in two different ways with chestnut potatoes. The parsnips were 1.) pureed and served in a ring around the edge of the plate and 2.) the crispy chips on the top. Both delicious. There were pieces of potatoes next to cooked chestnuts nestled under the slices of venison. The dish was topped with an edible flower, which we also ate!

The combination of everything was simply amazing, and this was such a wonderful treat for Martin's birthday dinner. What I didn't realize until later was that the evening's special was leg of Kitz. The Chef cooked the tenderloin just for us!

I wondered what the English translation of "Kitz" is, but there isn't one. We don't eat fawn in America. It's not even legal to kill them. I told the Chef that after the meal, and he said, "Na, der Jäger hat ihn erlegt, und ich hab' ihn genommen." ("Well, the hunter got him, so I decided to take him.") I don't even feel guilty saying we're glad he did! I don't think it's common here to shoot fawns, but perhaps official hunters have special permission when the deer population gets too numerous.

I found this through a google search:
"There is no [English] term for fawn meat. This is likely because people do not generally eat it: In most countries, the US included, it is illegal to hunt dear under a certain age... From a culinary standpoint, deer meat is rather mild, given its lack of fat, so there isn't a strong reason to seek out baby deer."
~Robert Love, Software Engineer at Google

Well, Robert, not so much. I would admit that the guilt factor would dissuade me from seeking out baby deer meat, but Kitz prepared like this was darn delicious.  This young Chef is a Zauberer - a magician - in the kitchen and we are so fortunate that he grew up here and returned to establish his Stüble after his training and apprenticeships under top chefs in other fine restaurants. We feel a wee bit spoiled having a place like this within walking distance of our home!

We truly appreciate having a restaurant in our town where the talented Chef knows us, knows what we love to eat, and conjures wonderful meals from every piece of meat he brings into his kitchen. He does vegetarian dishes, too! On Sundays they offer a buffet lunch with seasonal salads and starters, a choice of one of three main dishes (a vegetarian dish is always one of the choices), and a dessert buffet with delicacies served in small portions so that one can try several without feeling overfull.

The Krone has an open concept, meaning that the main parts of the dishes are cooked in an open kitchen that the guests can see while they dine. The messy, loud, and background work is done in the back kitchen. Since the Chef is right there in his cooking space when people walk in, he always greets everyone personally. He usually comes over to each table to wish diners a Guten Appetit!" and thanks guests and bids them a good evening as they leave. Since he cooks on a Präsentierteller (on display), he has somehow learned to never look frazzled even when the restaurant is full - I can't even manage to appear calm when I'm cooking for just the two of us!

This is a casual family restaurant which serves fancy and delicious dishes, and I highly recommend it in the unlikely event that you find yourself in our tiny village. Is it worth a drive from, for instance, Stuttgart? Absolutely! I'd call for a reservation, though, just to be safe. The menu, which changes seasonally and yearly though the specialties always remain, is on their website.

We have brought almost all of our visitors here, we dine here together at least once a month, and we have never once had a bite of anything we didn't like. I try a spoon-size portion of almost everything on the Sunday starter buffet and have therefore tried dishes I wouldn't have ordered otherwise. They come up with such interesting combinations, foods I'd never heard of (Quitten, for instance, which are quinces - I'd never heard of them in either language), and delicious recipes for the popular seasonal foods like weißer Spargel (white asparagus) and Pfifferlinge (chanterelles).

If you have special dietary needs, that's no problem, of course. A guest at a neighboring table one Sunday said she really wanted a certain dish but was lactose intolerant so the sauce wouldn't work. The Chef prepared a different sauce for her. Their decor is simple, elegant, and personal, and the paintings on the walls were created by a local artist. Well-behaved dogs - even large ones - are welcome. We once had a Weimaraner lying under the table next to us.

I have no connection to the restaurant, they didn't ask me to advertise for them, and they don't even know yet that I'm writing this post. I'm just telling you about a restaurant we love and hope will stay forever in our little village!

Posted by Ami im Schwabenland at 19:26