Last weekend M, his mother, and I drove (and you know who did the driving!) to Breisach on the Rhein to 1.) visit relatives and 2.) pop into France to see the Albert-Schweitzer-Haus in Gunsbach. This was a wonderful trip!

Breisach is a border town in the Baden region of Baden-Württemberg. To get there we drove through the Black Forest into the Rhein valley. Just across the Rhein to the west is the Elsass/Alsace area of France with the Vogesen Mountains beyond, and to the east and north is the Kaiserstuhl, one of the well-known wine regions of Germany. It is not far from Freiburg in Germany or Colmar in France. The town's history begins with a Celtic prince who had his seat on the volcanic hill upon which the cathedral now stands, then the Romans had a castle there (ca. 260 A.D.), and finally the Staufer (House of Hohenstaufen) founded the town in about the 11th century. It has always been an important town for crossing over the Rhein between Germany and France.

The relatives we visited are M's father's cousin (Helga) and her husband, children, and grandchildren, whom I have never met and M has not seen for about 15 years. As long as I have known M I have heard about "the Breisach clan" - mainly about M's uncle and aunt, who have since passed away - how warm and welcoming they are/were, how much fun the families had together when they visited, and so on. M learned from his great uncle how important it is never to waste food (he had been a prisoner in a Russian camp at the end of WWII), and he said no matter how busy his great aunt was, she always made time for the kids and put up with all their shenanigans without scolding.

The whole family - from the oldest (83) to the youngest grandchild (10, I think) and his two brothers (12 and 14) - were so warm, kind, interesting, and hospitable! Really genuine, caring people. One of the reasons I was looking forward to meeting them is that Helga is from the Sudetenland, as was M's father, and since she was 11 when the more than three million Sudeten Germans were forced to leave the only homes they'd ever known and relocate to Germany (1945-1948), she remembers her family's situation and journey. I asked if she would share her memories with me, and she did. I can't tell you how many times I got Gänsehaut (goose bumps) during her story, and I felt very honored that she was willing to talk with me about her past.

Helga also guided us through Breisach's Münster (Cathedral), which sits atop the hill overlooking the town of Breisach and the Rhein. A church visit is always in order when my Schwiegermutter and I travel together, especially when someone familiar with the church and its history can tell us about it. The magnificent carved wooden high altar is quite a sight. 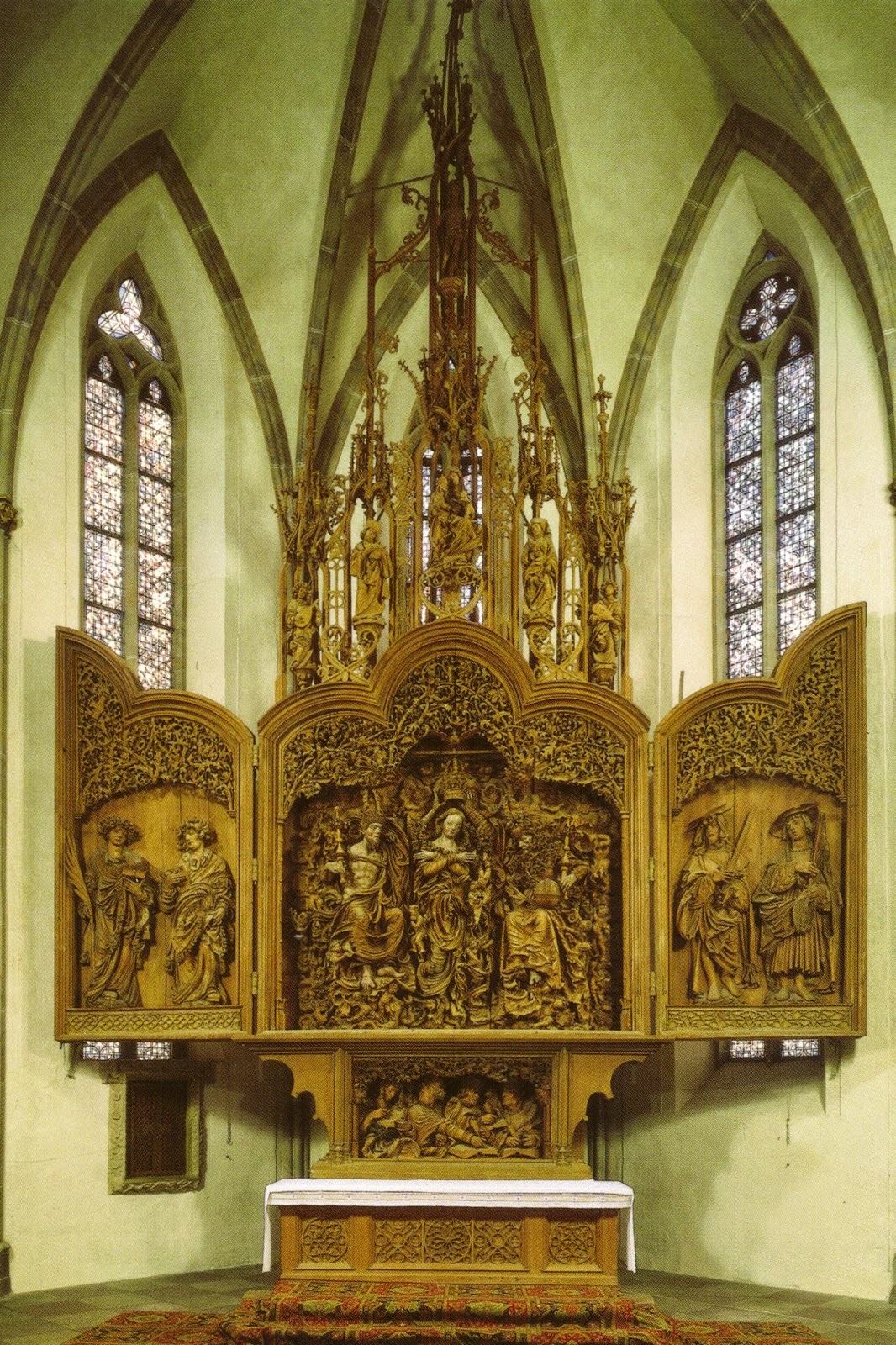 On Saturday the three of us drove into France to Gunsbach in the Elsass, where Albert Schweitzer grew up and had a home. His rooms in the house have been turned into a small museum and we joined a small tour led by a young woman with a beautiful French accent as she spoke German. I became interested in Albert Schweitzer's life and work about a year ago when I met a now-retired doctor who worked with Schweitzer at his hospital in Lambarene, Gabon in the 1960s. Taking a tour through Schweitzer's former home and walking the Albert-Schweitzer-Weg on the hill above Gunsbach was quite a treat for me.


I thought the highlight of this trip was going to be the stop in Gunsbach - and I am very glad we did that! - but honestly it was spending time every day from Friday to Sunday with M's extended family. I loved listening to M and his mum sharing memories with the rest of them and I never once felt out of connection or like a fifth wheel being the only stranger in the bunch. They welcomed me whole-heartedly, and I hope it won't be too long before we see them again. I think I got on the grandsons' good side right away because I had baked Nestle Tollhouse chocolate chip cookies to bring for Helga, and she gave some to the boys when they arrived on Saturday afternoon. The first thing they said to me after a handshake and proper greeting was, "Danke für die Kekse!" (Thank you for the cookies!) I even earned bonus points for including some without nuts. They weren't shy at all meeting their mother's second cousin (M), whom they'd never met before, and his strange American wife. We had a great conversation with these three boys during dinner on Saturday - they discussed computers with M, and my Schwiegermutter and I taught them some differences between US-English and proper English! :-)

It was a thoroughly enjoyable weekend with great people, I didn't have any serious language issues, and I learned plenty! We look forward to our next trip to Breisach and the Elsass.

Posted by Ami im Schwabenland at 23:08