I've joined a few online expat groups in recent months, which has led to quite a few laughs, incredulous "No way!"'s and feelings of empathy and comraderie. I've never had much desire to connect with other expats, but I can enjoy meeting people from around the world. And since I only want to be sociable when I feel like being sociable, the online nature of these groups works well for me. I have been learning that many out there share the kinds of trials, tribulations, and triumphs that I encounter, too, as an expat.

In one of the groups I have seen quite a few grumbles about the service provided by the Deutsche Post and DHL. I've thought often enough "Gosh, I haven't had any trouble with mail or deliveries. I wonder what's going on with them. Maybe deliveries are more problematic in big cities. 'Cuz things have been fine here."

Well, the Deutsche Post and DHL must have heard me.

I finally got around to doing my taxes this past weekend. Yesterday I tried to mail them. 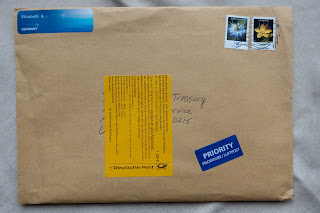 I went to the Post Filiale (branch/outlet) in our grocery store - you know, where they sell cigarettes, tobacco, magazines, gift cards, shisha pipes, purses, and lottery tickets. I go there frequently enough that the regular employee knows me.

She wasn't there yesterday. It was some young pup I'd never seen before. Ugh. Well, it shouldn't be a problem, because like the little planner I am, I weighed the envelope on our kitchen scale, measured its dimensions, and figured the postage on the Deutsche Post website: €3,70.

I handed my envelope to the young woman and said in German "This is for the USA." Xanthippe (not her real name) plopped the envelope onto the scale, looked at her screen, and said, "That'll be 90 cents."

Xanthippe looks again, scans something, and says, "Yep, it's 90 cents."

A postcard costs 90 cents to the USA. I can't mail a Christmas card for 90 cents if I include a letter of normal size.

But she's employed by the Deutsche Post. She knows more than I do, right? She's got machines, booklets, and pieces of paper taped to the countertop with pricing info. Surely she has the right information and I'm somehow wrong - although I know I'm not! Maybe there's a special today on mailing tax forms to the IRS. Maybe it qualifies for some reason for the price of a regular international letter stamp. You do get used to being told you're wrong here, and as a result doubting yourself.

She rang up the 90 cents, I paid, waited for my receipt, and walked away with the feeling my taxes and I would be seeing each other again soon.

This afternoon I opened our mailbox and, along with 4 flyers from various political parties pertaining to the big EU election and a local one coming up on Sunday, found myself staring at the backside of what I knew would be my taxes.

Now, if you look closely at the envelope, you'll see that there are two stamps on it - one for 90 cents, and one for €1,45 (total €2,35). But I had only paid 90 cents. That means after I walked away Xanthippe had second thoughts and added an extra stamp. Unfortunately, despite all the resources available to her at her workplace, she still wasn't able to figure out the correct amount, so the envelope came back to me anyway.

So I took the envelope, my receipt, and a new envelope to the Post outlet again. This time it was someone else, a man whom I've seen before, so that was comforting. I explained the situation and expressed my concern because these are my TAXES. He checked in a brochure and looked closely at the yellow sticker on the envelope. He confirmed that the postage should have been €3,70.

Now look at the yellow sticker. It says an international Großbrief costs €3,70 in small print. Then it says in larger print that I still owe €1,25. I didn't even notice that error, but Bernhard the Post guy (not his real name) used his calculator to check. I don't owe an additional €1,25, but rather €1,35!

Had Bernhard not checked, the envelope would have been returned to me AGAIN with insufficient postage, begging the question "How many screw-ups does it take to get an envelope from Germany to the IRS?". Then again, since a mail carrier in our town threw hundreds of undelivered pieces of mail into the Altpapier container last summer because she was overwhelmed by her job, I can be grateful my taxes were returned to me.

Now for the PSA portion of this post: When you are in Germany, be like the Germans. When you know you're right, stand your ground and say confidently (but politely, because you're an American) "You are wrong!" When you have done your research and know from previous experience that what a German is telling you cannot be true, then insist that he or she check the computer, brochures, whatever. Don't be cowed into thinking you might be wrong because the other person is, well...German. If you're just buying a bag of Spätzle and it's cheaper than you expected, good for you. But trust me, the Deutsche Post doesn't work that way.

If this had only happened once to me, I wouldn't be writing about it. But it happened at Christmas also, with something I was mailing to my kids. And apparently it has happened to quite a few expats - one commented that she knew that big yellow sticker covering the IRS's address could be peeled off and moved because the same thing happened to her with all of her Christmas cards: the postal worker told her the postage was less than she'd figured, so she paid what she was told, and all 50 cards came back to her the next day.

I don't think the Deutsche Post sucks. Nobody's perfect, after all! I was mostly annoyed with myself for doubting what I knew was right and backing down, just because a German employee gave me different information. I told Bernhard this has happened here before, and asked if next time I should insist? He said "Yes, tell her to check the brochure." (Not the website, mind you. The brochure.) He also said he would talk to his coworker. "She's new." He didn't apologize for my inconvenience (Germans in customer service don't generally apologize), but he solved my problem and assured me my tax documents would now head on their way to the IRS.

Update: The envelope came back again, this time without the big yellow sticker and without explanation. I gave up and handed it to a friend of mine who lives in the US but was visiting family in Germany, and she put it in the U.S. mail for me when she returned home. 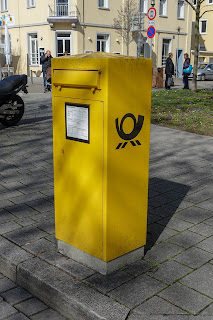