Germans tend to be very private. There is a clear separation between work and social life, and a clear distinction between colleagues, aquaintances and friends.  One's property line is clearly defined with natural or manmade barriers, and gates are popular. 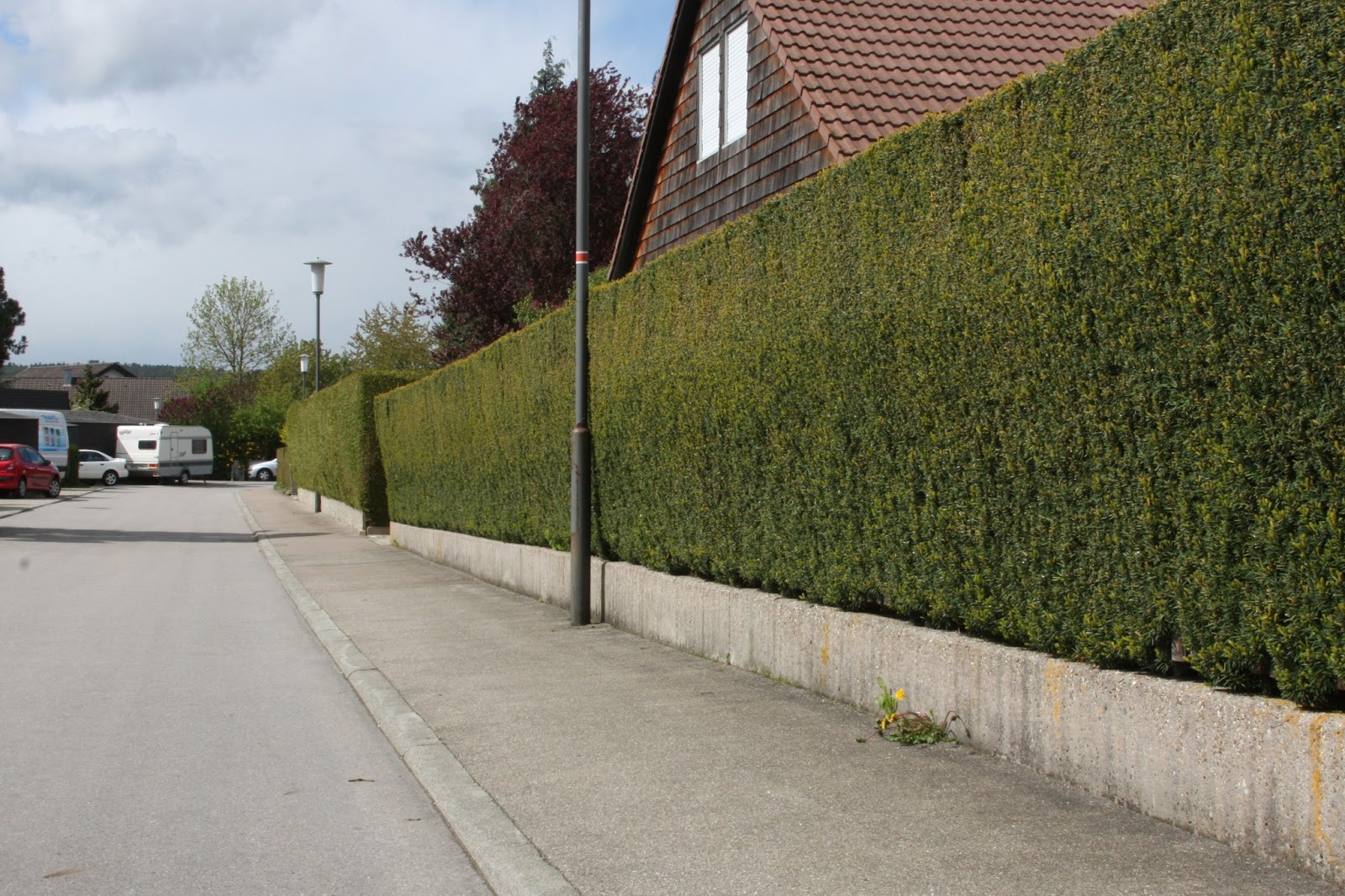 In our little community and on our street, most of the residents close off their property with tall hedges. Many of the houses are hidden, so if they live in a bunglow-style house like we do, you might not even know what your neighbor's house looks like. There seems to be a strongly intended message of "Do not look at my house, keep your eyes off my garden, don't step on my grass, and keep your dog off my lawn!" That's not to say our neighbors aren't friendly - the ones we've met in passing are very personable. They just value privacy. And I think they would agree with Robert Frost - "Good fences make good neighbors." 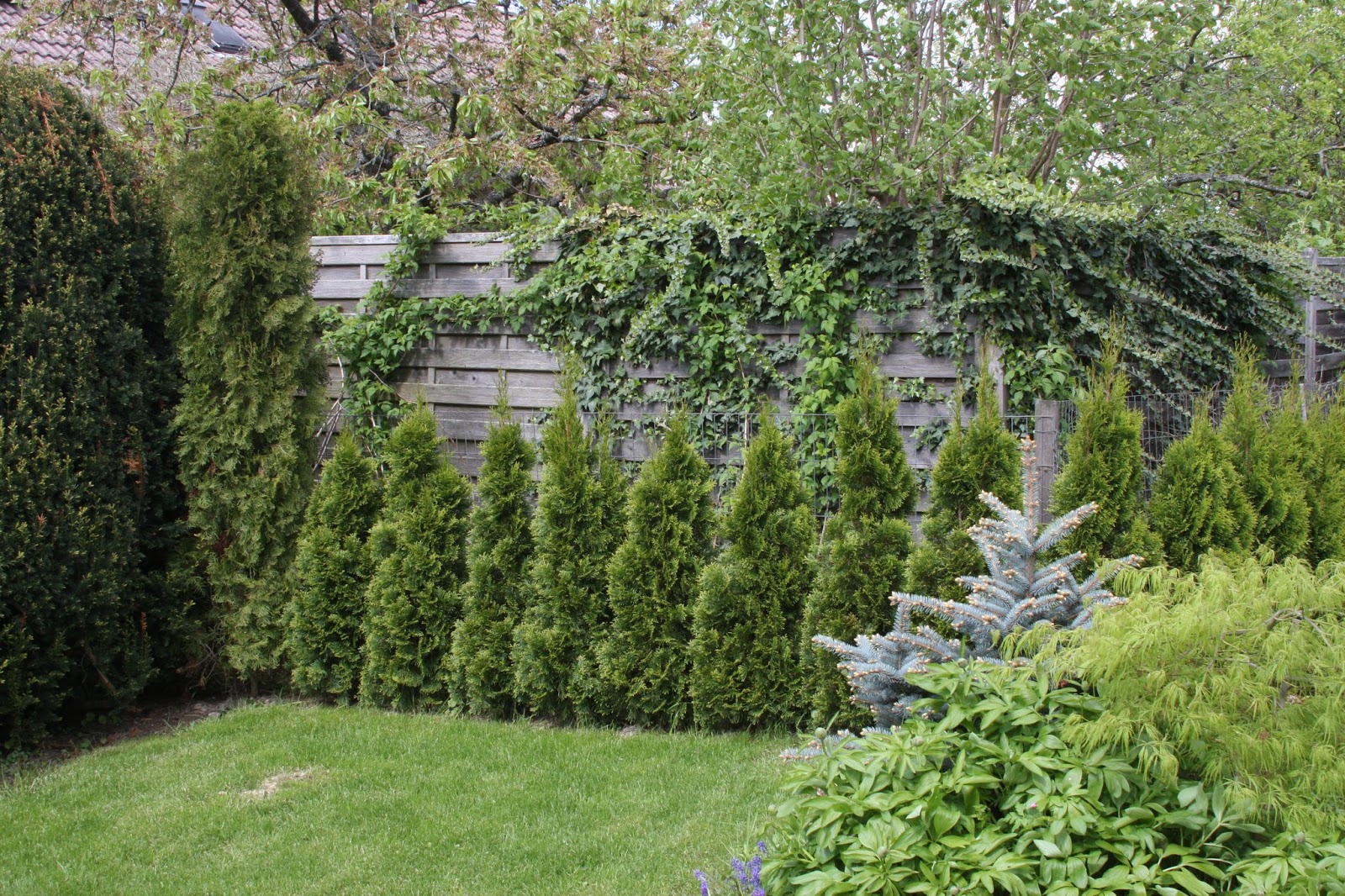 This is the view toward one of our neighbors' houses. We have no idea what the people or their house look like. The fence is theirs, as is the creeping monster plant that is climbing over to bully our row of evergreens.*

*Update 26. August, 2014:  We have met these neighbors! They have a huge cherry tree in their yard and a plum tree, and they have been so kind this summer to share the delicious fruit with us.

When we moved in, we also had a tall hedge along the street and along the south side of the garden. It wasn't very healthy, so we had it cut back to regrow more thickly. Now we notice people strolling past, pausing, pointing into our garden, and discussing what they see. We do this too, of course, when we go for a walk and pass a low-enough hedge at someone else's property. One day a woman was walking past while M was outside, and she said, "I never knew this was a bungalow house! How nice!"

This emphasis on privacy doesn't bother me, but it does make it difficult to meet our neighbors. By cutting back our hedge we have all but forced the neighbors to that side to greet us every time they come and go when we're sitting on our patio, doing yard work, or grilling. I imagine they preferred the hedge! They're very friendly, though, and I think they're getting used to us.

Word has got out in the neighborhood that an American lives here, which we know because of a couple who walked past earlier this year and stopped to introduce themselves with "You're from the U.S., right?" By now they also know that M, while apparently German, uses his Weber grill all year round and multiple times per week during the German "grill season", that we speak mainly English with each other, that one of us has a British mother who visits occasionally (and whom we put to work cleaning out the hedge on Mother's Day weekend), and that M was probably in the army (he wears his camouflage pants to mow).

We're considering having a grill-party for the fourth of July, and if we do, we'll invite the neighbors. The impression many Germans have of Americans is that we are very friendly and open, smile a lot, and like to grill. I see no problem in perpetuating those stereotypes.  And perhaps I can show them that Nestle Tollhouse cookies also make good neighbors!


Posted by Ami im Schwabenland at 17:42 No comments: