Life Update: Not a Hunter Yet

I’ve got my life back, with the Jägerprüfung (hunting test) behind me for the most part. I’ve started organizing and cleaning the house for the first time in what feels like months and in the evenings I can actually watch TV without feeling guilty because I should be studying instead. Now that I have learned how much I do not know, I will within days be starting to study and prepare for the next phase: Falknerei.

I will have to repeat the Waffenhandhabung (gun handling) and Schießen (shooting) because I failed the first part. Quite spectacularly, I might add – the gun handling test should take about 15 minutes, and I was out in four. What did I do wrong? I forgot to check the caliber of the gun and the ammo before loading. That is an immediate and undebatable K.O. mistake = game over. I was ready, I knew what to do, and I didn’t even feel nervous. But my head was not in the game and so I will repeat in May.

The written – multiple choice – test was no problem. If there’s one thing we Amis can do, it’s multiple choice tests. Many (most?) tests in school and afterwards are in that format. I used an online program from Heintges that was not perfect but very good as well as going over the 1250 questions in the question catalog for Baden-Württemberg that are available online. That only requires repetition, memorization and careful reading. If I understood correctly when my scores were rattled off, in each of the five subject areas I scored at least 23 of 25 and in two of them I got all 25 right.

The real surprise was the mündlich-praktisch (oral-practical) part. I did not expect to pass that on my first go, but I did! There were five different stations: 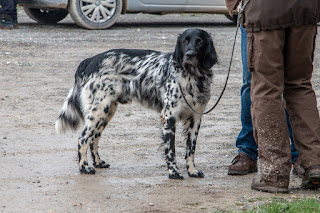 I was ready to answer which hunting dog would best fit me and my future hunting goals, but I didn't draw that question. I would have said the dog pictured above - the großer Münsterländer for a number of reasons I don't need to go into. He's a Vorstehhund (pointer) and he is or was affectionately referred to as a Habichtshund (hawk dog).

My test began with subject 5 in the Wildkammer (the room in which animals are “field dressed”). I walked into the Kammer and stood next to a Rehbock (roe buck) hanging from its hind legs with his guts spilling out. The Prüfer (guys giving the test) said, “Hello! Please put on some rubber gloves and pick up that knife.” Each examinee has to have a go at part of the “field dressing,” which is why it was already partially open. I had never actually taken knife to hand for this, only observed quite a few times. But apparently I did ok. Then I had to identify the organs I could see: kidney, spleen, liver, diaphragm, lymph nodes and Brandadern (femoral arteries). Then they asked me what I’d have to do after shooting a duck and a rabbit, and lastly questions about various diseases that can be transferred from animal to human.

When they were finished with me, one of them told the young guy taking notes to ask me a question because he always asked such good ones. He thought a moment and asked what family the Weißwedelhirsch (white-tailed deer) belongs to (they had seen that I was born in Michigan). I told them I never had a single thing to do with hunting in the US but said I think they are distantly related to the Elch, probably Konzentratselektierer and they shed their antlers, so from the family Cerviden.

My test ended with Waffenkunde (study of weapons). I had to chuckle when they asked me to explain Selbstladerwaffen (self-loading, semi-automatic guns) because I struggled so much with that. Maybe because I associate those with mass shootings in the US rather than with hunting, my brain just blocked that out. Fortunately M had given it one more try the evening before the test to explain it to me. At the test I choked out an answer that qualified as "good enough."

I needed to identify various animals, skulls, antlers, tree branches, and internal organs, describe what is allowed by law and not, the difference between rabbits and hares, and which type of dog would be needed to search for the animal that was shot based on the evidence left behind on the ground.

M has been great during this whole process! Not only has he explained various gun things to me ad nauseam, but he also drove  me to the tests over three days (my Schwiegermutter got up very early on Monday and dumped me at the Landratsamt for the written test, as I’d stayed at her place the night before), he’s driven us to the Schießstand twice a week since October, to the Jagdschule in Dettingen for Waffenhandhabung practice three times, and to the Schießstand in Esslingen-Deizisau to get familiar with the layout. All of these places are an hour from home if traffic isn’t bad. You might wonder why I’m not driving myself. I am still deathly afraid of driving here outside of our local community, and he spared me the added stress of driving on top of the general nervousness of the test situation. For that I am eternally grateful!!

For anyone who is preparing for this test and finds their way to my blog, I might write a post listing all the questions I was asked and tasks I was given. I asked several classmates to send me theirs after their test, and it really helped me get a better idea of what I would be facing. The Prüfer were very fair, I thought, searching for what I knew and finding my limits as well.

All-in-all it was a very good experience, but I am also glad it's behind me! I have never faced a test this difficult in all my life.

Posted by Ami im Schwabenland at 09:44