When I went back to school in 1997 to obtain a minor to teach German (I already had my B.A. in English and my teaching license and had been teaching English part time for 2 years), one of the courses I needed to take was “Methods in Teaching Foreign Language.” My classmates were future teachers of Spanish, French, and German, and the professor wanted to demonstrate to us how it is possible to teach a language from day 1 using no English. Obviously she could not use any of our second languages because the point was to introduce a new language.

So she taught us Swahili.

She had spent some years in Kenya and was therefore comfortable with the basics, which was all she needed to demonstrate. In every German class I have ever taught, I used the method she taught us and reviewed with us nearly every day. Little did I know I would even have the opportunity to teach several groups of students some of those Swahili phrases I had learned in my methods class!

That class was my very first exposure to Swahili, but since then the language has come into my life again and again. If you go on the safari at Disney's Animal Kingdom in Florida, you'll be greeted in Swahili. A friend of mine in Esslingen spent some years in Kenya and learned Swahili, and when I discovered that I greeted him with, "Jambo!" My aunt and uncle spent some time in Kenya a number of years ago and came back with a CD of music in Swahili, which I still have. My dad and M's host father went on a Photo-Safari in Tanzania and Kenya and came back with great pictures and fascinating tales.

The methods teacher taught us to count from 1 to 10 (which I can still do), how to say hello and introduce ourselves, and ask someone else’s name. She taught us more than that, but that’s what I’ve retained. And as I said, I have used her method in each beginning German class I've taught. The teacher uses lots of body language and gestures but speaks no English.

As an example, to teach the numbers, I start counting with my fingers: “moja-mbili-tatu-nne-tano!” Then I repeat. Then I gesture for the students to say the numbers with me and use their fingers, too. We count 1-5 and then 5-1, repeating often. Then I pass out cards with number words on them to five different students, write 1-2-3-4-5 on the board, and gesture for them to put the cards under the corresponding number. The student who feels unsure can wait for all the others to place their cards. Then we read the numbers while I point to each one – this helps the visual learners (like me!) who need to see a word written out in order to confidently pronounce it. I point to the numbers in a random order while they read them, then I remove the cards and point only to the numbers. I hold up various amounts of fingers while they call out the numbers. The next day I add “sita-saba-nane-tisa-kumi”!

“Jina langu ni Frau Hejl.  Jina lako ni nani?“ Through pointing to my name tag and gestures, I get them to understand what I’m asking, and they hesitatingly give their name. Then through repetition I get them to say the whole sentence: “Jina langu ni Julie!”

This is so much fun every time!

At what point did I actually have the chance to teach my students in Wisconsin some Swahili? First of all I taught American Literature and added Hemingway’s “The Short Happy Life of Francis Macomber” to my curriculum. The story takes place in Kenya and is peppered with a few Swahili words – Bwana, Memsahib – so I started the days we read it by teaching them the numbers and phrases I’d learned. Then to my German level 3&4 class I added what is still my all-time favorite movie to the curriculum: Nirgendwo in Afrika (2001). Through that movie my students and I learned more Swahili words and phrases. They even had to take a vocabulary quiz in German & Swahili – no English at all! 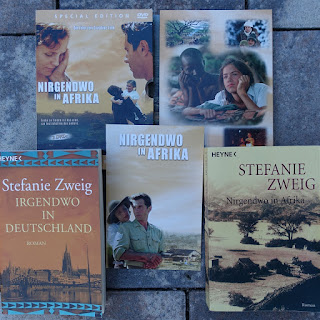 What is the Swahili word for Brunnen? Kisima!  Feuer? Moja!  Kind? Toto!

And guess what? If you have seen “the Lion King” (and who hasn’t?), you also know some Swahili words!

What got me thinking enough about Swahili to write this post? This beautiful song. (You can thank me later.) I wrote recently that I obsess about songs on occasion, and I cannot stop listening to this one. There is so much heart and soul in African music! Here it is with just the lyrics. I’ve learned the chorus and will work on the rest of the song next.

Incidentally, I cannot recommend Nirgendwo in Afrika (Nowhere in Africa) enough. It is a brilliant film about family, war, prejudice, home, language, friendship, expatriates, sacrifice, love, and culture shock. It focuses on a Jewish family who flees Germany in the 1930s and settles in Kenya, where the mother/wife ironically has many prejudices against the Kenyan natives. It is an autobiographical story, told by the writer Stefanie Zweig. The scenery, the soundtrack, the actors...all superb. It surely earned its Oscar for best foreign film.

I'm a lover of film quotes, and here's a taste:


If I'm being honest, I wrote this blog post for the purpose of sharing the song "Baba Yetu" with you. Did you listen to it? Am I nutty for being captivated by it?

Posted by Ami im Schwabenland at 21:28