Geeking Out at a Horse Show

I'll just warn you straight off - this is a post that will only interest my daughter and perhaps one other friend of mine. I won't feel bad if you don't read on, especially since it has nothing to do with expat life, Swabia, Germany, or food.

It's all about horses.

Not long ago I read in the local paper that there was to be a horse show (featuring show jumping) at a stable near us. I've been tempted to pop in at other local horse shows, but either the drive or bad weather made me change my mind. Today it is a gorgeous sunny day, and this particular horse show was less than ten minutes away by car. 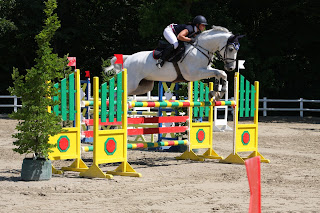 I have no idea who these riders are. But this is what I do at horse shows - take pictures. And I could do it all damn day. I am out of practice, though, so the horses are not as sharp as they should be. I'll work on that. 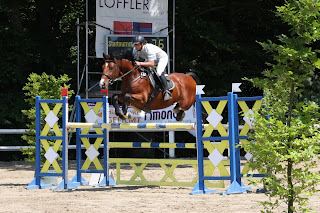 The real pull, though, was that a rider I really admire was on the list of competitors - Michael Jung. His riding and training facility is also nearby, so he's a local boy. He is featured in the sports section of our local paper rather often, but here's the universally interesting thing: he's a flippin' Olympic Gold Medalist! In 2012 he won the individual and team golds for eventing. He has won European Championships, German Championships, and a few weeks ago he won first and third place at the Rolex Three Day Event in Kentucky. For the non-horsey people who might still be reading, he rode two different horses, which is how he could place twice. 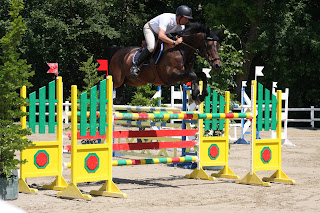 These are not Michael Jung yet. He was the finale, in that I left after he competed.


I was trying not to raise suspicion or look like a stalker (or worse, paparazzi), but I might have failed. At one point I went into a building near the show ring to get out of the sun, and a guy came over to someone sitting near me to ask a question. I glanced over, and it was Michael. Ho. Lee. Crap. After I popped my eyeballs back into my skull, I realized he's just a regular guy, in the way that Thomas Müller is a regular guy, or Aaron Rogers. As M said later, he puts his riding pants on one leg at a time, too. Yeah, still. I could have walked over and said something to him, but he looked like he was enjoying his lunch and I didn't want to interrupt. I probably would have stuttered anyway or said something embarrassing. 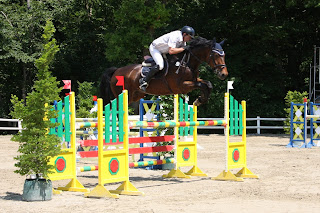 I had the best angle at this jump, which is why most of the postable photos are of this one. I don't know who these riders are either, but they've got good-looking horses!

I was standing right at the rail near the entrance/exit from the ring, and I was conscious of not wanting to scare the horses with the clickclickclick of my camera. Such a thing shouldn't scare them, but you'd be amazed what freaks these guys out. A flag, a hat, a puddle, a box that didn't bother them in one direction, but from the other direction it totally looks like something that might eat them... Poor Michael had a rail down because his young horse got distracted by the horse and rider that were standing quietly at the gate waiting for their chance to step into the ring. Thank God he said that after they finished, because I did not want the problem to have been my camera!


I was only there for about 2 1/2 hours, and I saw horse after horse ride the same jumps in the same order, lamenting only that I couldn't stand in the ring to take my photos like the official photographer. If I had stayed another four or five hours I would have been able to see Michael ride again, and on a horse I've heard of - der Dürer. But it was hot and I was alone. If it had been partially cloudy or if my daughter had been with me, I/we would still be there.

The horse I saw Michael ride is Daniels Jack. And here they are: 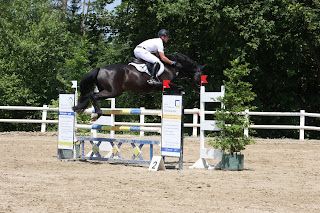 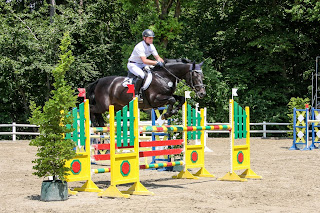 As I headed back to the car staring dreamily at all these beautiful horses, I spotted them again. Thank goodness he was looking in the other direction, or he might have finally started getting nervous about this creeper with the camera. (There were no other people around with big cameras once the official photographer left.) But at least Jack looked at me! 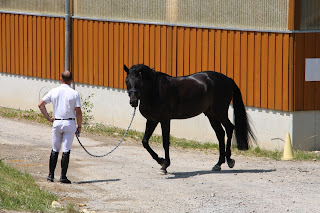 Seriously, I could watch and photograph horses all day long.

Update: As if to punctuate that sentence, M offered to return to the show today (Sunday) and give me some photography pointers. Between the two of us we took a few hundred pictures, and here are some highlights for those of you who didn't already have enough. 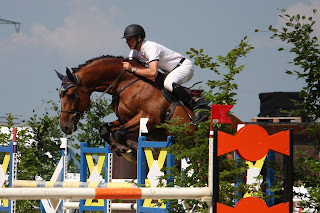 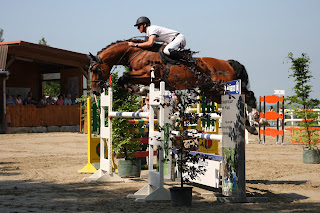 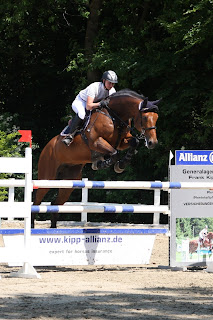 Posted by Ami im Schwabenland at 16:18