Despite an extended illness and finishing up my latest Integrationskurs, I found lots of time in January to read. I actually read six books and finished a 7th! The one I'm about to review is more of a booklet, really, with only 100 pages of light reading. 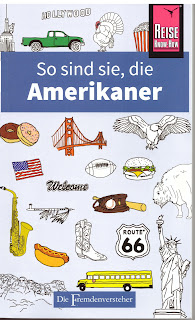 This book is part of a series, written in German, about people of other countries. The series also includes books about Brits, Islanders, the French, Swedes, and the Japanese, among others. Judging from the one about my Landsleute, I believe the intent is for the writers to be whimsical while relating their honest opinions and observations.

The word that came to my mind when I was about half-way through with the book (I read it within a few hours) was: Volltreffer!  From my point-of-view the writer pretty much hit the nail on the head, though I believe most Americans would be offended and defensive if they could read it. I went to Amazon.de to see what reviews were there, being almost certain one of my Landsleute would have commented, and sure enough. Just look here and click on the comment to wayways's 5-star review. ("Wow, somebody really hates Americans!!")

Admittedly the writer does not focus on the many positive aspects of Americans and life in America, probably because those aren't particularly amusing. But I don't see her as just complaining, either. If you want to be comfortable living in America as a foreigner, you need to try to understand what makes them tick and avoid hot spots.

This is a good book to read in preparation for a quick trip to the States, though of course there's no way to truly explain the people of any country in just 100 pages.

The author begins with a warning: "Americans are like teenagers: loud, curious, unable to keep a secret, indelicate, and with a tendency toward embarrassing behavior in public. When one accepts their basically adolescent ways, one can also understand the rest of their culture."

Those are her first two sentences, and I'm pretty certain that most Americans would already be ready to fight.

She goes on to say, "Amerikaner sind freundlich, weil sie nicht anders können." (Americans are friendly, because they don't know how to be anything else.") She's talking about Americans' interactions with strangers, and of course comparing it to the way Germans tend to be.

The writer points out a well-known fact - that Americans are proud to be Americans, because the U.S. is the greatest country on earth. People from most countries believe that about their home, but we Americans have proof: so many people from everywhere in the world want to come to America, and many risk their lives to get here. What more proof is needed? (p. 11)

She also notes that just 40% of Americans own a passport (compared to 75% of Canadians and 80% of Brits, p. 7), but there's a reason for that, too. The U.S. is so huge that one can travel for weeks without ever leaving the Homeland. With most Americans preferring to stay home (or not being able to afford to travel), this leads to a lack of understanding of other lands and peoples and their ways of doing things. From thence comes another common stereotype of Americans: that we know very little about the rest of the world.

For most of the writer's observations, I can say I know an American (or several) who illustrates her point.
"Selbst wenn die Vorortbewohner abgesehen vom Haus ihrer Nachbarn auch jedes andere Ziel zu Fuß erreichen könnten, würden sie es trotzdem nicht tun." (p. 22) (Even if the suburb dwellers could reach not only their neighbor's house but every other destination by foot, they wouldn't do it.)   *The front door of a favorite restaurant is an 8-minute walk from the front door of my parents' house, and they drive there for meals. In their defense, they would have to walk along the side of a road to get there because there's no sidewalk.

"In den USA entspricht die Ehe oftmals eher einer Serie monogamer Beziehungen als einem Bund fürs Leben." (p. 31) (Marriage is often more a series of monogamous relationships than a bond for life.) *An American I once dated was described by his sister as "a serial monogamist."

"Mittelschichtseltern stellen fest, dass ihre Kinder nicht nur keine Ahnung haben, welche Gabel man wann bei einem förmlichen Dinner verwendet, sondern dass sie selten überhaupt eine Gabel benutzen." (p. 37) (Middle class parents say not only that their children wouldn't know which fork to use during a formal dinner, but that they seldom use a fork at all.)  *One of the students I took to Germany years ago on a class trip (16 years old) did not know how to cut her Schnitzel with a knife. She tried to cut the meat holding the knife as if she were stabbing something with it. Most kid-friendly meals in America (sandwiches, hamburgers, bagels, tacos...) are eaten with the hands.


The writer did miss out on two pretty significant points that I consider important for Germans to know about Americans before spending time with them.


Do you disagree with me? Well, you might not be able to, because although I'm writing this blog post, I'm doubting the wisdom of publishing it. Not because I am afraid readers will disagree with me (I'd enjoy a healthy discussion about this!) but rather because I might lose friends - if people I know see this - and be labeled an American-hater. Which kind of illustrates my points, ya know?

The writer does mention positive qualities of Americans: many spend time volunteering, we really know how to have fun, we are friendly, polite, and optimistic, and we see most problems as challenges to overcome.

On the other hand, Americans almost always push blame onto someone or something other than themselves (p. 83). If you doubt that, just reflect back on the recent government shut-down (Jan. 2018). And what is every American kid's answer when his or her parents ask why s/he is getting a bad grade in any class? "The teacher hates me!" I taught high school English and German for 16 and 14 years respectively, and I assure you, we teachers do not give bad grades because we hate a student. Students earn bad grades when their work sucks or when they don't bother to do it. "But I spent all night on this assignment [that you assigned us two weeks ago]!"  Blaming others is a big part of the American psyche, to the delight of the 1.2 million lawyers working in the U.S., and it starts early.

Do I hate Americans? Nope. But I can look at myself and my Landsleute with a critical eye and not lose anything while doing so, and that criticism equates to most Americans as hatred. We all have quirks, and I think Germans have an easier time recognizing and acknowledging their own than Americans do. If you point out a German quirk to a German, rather than get defensive, he's likely to think a moment and say, "Yeah, I see where you get that."

I'll end with one funny American quirk the writer mentions that I'll bet you've never thought about. We use the oddest things to measure distance and size. (p. 53) We describe the size of a shopping mall parking lot in football fields. We describe volume in terms of how many bathtubs the thing would fill. And when someone asks how far away something is, we tell them how long it takes to drive there. "How far is Madison from Sheboygan?" "Oh, about two hours."

What quirks do you notice about your own people?

Can you look at yourself and your Landsleute with a critical eye?

Posted by Ami im Schwabenland at 12:00