I want an owl. More specifically, I want a Steinkauz. That translates in English to "Little Owl," which is a breed of European screech owl and not a commentary on its size, although the dear things are indeed quite small. 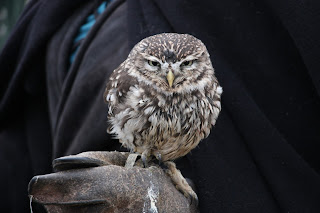 If you are or know an animal activist, fear not. I am well aware that the best home for a Steinkauz is not a human-inhabited stone bungalow. Just because I want one doesn't mean I think I can or should have one. M and I have even ruled out dogs and cats because our lifestyle does not lend itself to pets that need care and attention. We have a good feel for what would and would not be fair to an animal, and we would not consider having one until we know exactly how to care for it.

What we'd really like is a wild Steinkauz to willingly move to our quiet yard - into the Steinkauzhaus that M is going to build, knowing full well that Steinkäuze do not necessarily inhabit our area. It's a real shame, because I'm certain they'd be quite comfortable here.


How it all began

M's mother has a sizable collection of owl figurines in her flat, which began because M's father was headmaster at a Gymnasium in Esslingen whose mascot is an owl. Like many of their friends and acquaintances, I thought of her every time I saw anything owlish - a bag, a picture, a calendar, a mug... Eventually I started liking the things I'd bought for her and began keeping them for myself! (Even she says she has enough by now.)

Since moving to Germany I have had several opportunities to see exhibitions of Falknereien, which almost always have owls as well as falcons and other birds of prey. The falcons and eagles are impressive, but I have eyes only for the gorgeous owls.

My love affair with Steinkäuze began - appropriately - in Esslingen, at the Weihnachtsmarkt. I'd met a fellow blogger there and wanted to show her the view from the Burg on the hill overlooking the Altstadt, and so we trudged up the 350 steps and were rewarded with the lovely view...and owls! A Falknerei had taken up roost on the lawn of the Burg where there is plenty of space for the birds to fly, though while we were there they were all tethered or being held by their handlers.

I spied this darling little fellow and was captivated by his indignant, angry face, as he seemed to be imploring me to put down my damn camera and set him free! At the time I thought he was a baby owl because of his size - I did not realize he was a Steinkauz and clearly full grown. 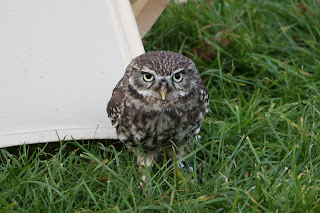 His fettered companions were splendidly regal and appeared less ill-tempered, but he'd stolen my heart.

I stumbled upon this book (left, in the photo below) while looking for information about Steinkäuze just the other day. I was going to save it and give it to M for Christmas, but I couldn't wait! I showed it to him the day it arrived and read every word and studied every gorgeous photo that evening.

It's a book by Falknerin, photographer, and writer Tanja Brandt, mainly about her two charming companions, Poldi the Steinkauz and Ingo the Belgian Malinois. These two unlikely friends pose for photos doing all kinds of crazy things: cuddling with each other, standing in the snow, sitting in a tree or on a bench, cowering under a mushroom in the rain (well, that's Poldi; Ingo doesn't fit under mushrooms), and often Poldi sits on Ingo's head... Ingo is patient and enthusiastic, and Poldi is grudgingly cooperative most of the time. They are clearly good friends. I would have bought the book for the photos alone, but Tanja also includes tons of information about Steinkäuze, and Poldi in particular. I am totally in love with him, and reading about him makes me want a Steinkauz of my very own all the more.

From her website I learned that Poldi's full name is Napoleon, a.k.a. Grumpy Owl. Fitting for that darling little bugger!

Where this is (probably not) heading

A mild interest in owls has turned into a near-obsession. Even M is in on it. We've actually discussed some evenings how we could attract a Steinkauz and future mate to relocate to our area, despite the fact that the more I learn (for instance Steinkäuze prefer not to fly if they can avoid it, and certainly not long distances), the more unlikely it seems we'll ever see one here of its own free will. We've talked about putting an ad in the Steinkauz-Presse that housing is available (once M builds the Steinkauzhaus, of course), and I've considered owl-napping one just briefly enough to show him how comfortable our area is, so he can get the word out. But we don't want one that is captive; we want a wild Steinkauz who just tolerates our presence and who would accept occasional snack offerings from us only during the hard winter months. And yes, we already know what Steinkäuze eat* and that one of the options wouldn't be all too difficult for work out with a local farmer.

*Curious? Newborn male chicks that are killed anyway because farmers need egg-laying hens, not tons of future roosters. Due to the small size of the Steinkauz, one meal is actually half a chick, so we'd be cutting them in half with a garden scissors and saving the leftovers in a ziplock bag in the freezer. In the wild they eat mainly field mice (though Poldi can't stand them), but they also enjoy rain worms and other creepy-crawlies now and then.

M is an engineer, so he's already been looking into how to build a proper Steinkauzhaus. They like a longish, tubular wooden house, and they need a Windfang (foyer). The door to the outside should not be right in line with the inner door into the nesting quarters, so if the door to the outside is on the right side of the front, the inner door should be on the left side. More on that in a later post when he starts building it.

We've gone to several exhibitions by Falknereien at castles in the area, and for M's birthday I have arranged a "Falknerstunde" (Hawker's Hour) at a Falknerei not far from home. Incidentally, if you click on that link and scroll down a bit, you'll see a Steinkauz glaring at you from the left side of the screen.

But why am I calling this post and the sure-to-come sequels "Alfred"? We've decided to name our Steinkauz Alfred. We're not sure why, but we tossed around a couple of names and this one stuck. So yes, we have named the Steinkauz that will probably never move into our yard.

In the mean time we will be looking into becoming Patentante and Patenonkel (godparents) to a sweet, grumpy little Steinkauz at a Falknerei somewhere near us. Photos will follow, even if they won't be as gorgeous and clever as Tanja's!

Posted by Ami im Schwabenland at 16:39