When we started planning our June trip to Scotland, my son, who is studying history, said he would like to see some castles. He saw plenty of castles on his two European trips in 2007 and 2008, but he was young then and has a different perspective by now. Despite living in Germany for 4+ years, I'm always game for a castle - as long as it's not Neuschwanstein - and especially ruins. So I knew we could happily honor his request.

These are the castles and castle ruins we visited during those 12 days.

Duart Castle is not far from the ferry port town of Craignure, and it's the seat of the Maclean clan. Years ago on M's first trip to Mull with his parents and sister, his father got gently scolded by a shepherd for driving a bit too fast along the road leading to the castle. "Ye should slow down, m' friend. That would be easier on yer shock absorbers and on my sheep!"  When they were having a cuppa tea in the coffee shop after touring the castle, the shepherd appeared - he was Sir Charles Hector Fitzroy Maclean - the laird of the castle! He died in 1990, but M recognized him on several family photos displayed in the castle.

The castle keep was built by Lochlan Lubanach Maclean in the 14th century and additional buildings were added 200 years later. Improvements have been made throughout the centuries, and although it fell into neglect and disrepair after the Mcleans lost possession of it, the current laird's great-grandfather purchased the ruins in 1911 and spent a fortune restoring it. Clan gatherings are hosted here occasionally, and if you take the shuttle from the Craignure dock to the castle, the driver will ask if any among you are Macleans - the clan chief wants to know.

You can stroll the grounds at no charge, or pay to go inside for a self-guided tour. Information is posted in each room, and visitors can go up to the battlements for a view across the Sound of Mull, Lismore Island, the mainland, and Lady's Rock (at low tide). Duart can be seen in the Sean Connery movie Entrapment, which we quite like! It pretends to be Connery's character's residence, and several scenes were filmed here.

Did Mary, Queen of Scots stay here?  No. She never came to the island, silly twit. 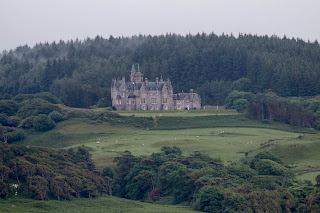 This might be cheating because Glengorm is not a castle you can visit and tour, but this is where we always stay on Mull - in a self-catering cottage or flat. It overlooks the coast in the north of Mull.

The castle was built by James Forsyth in the 1860s after he bought the Sorne Estate and ran the tenants off the land. The name "Glengorm" means "Blue Valley" and was suggested to him by one of the evicted tenants. She was snarkishly referring to the bluish smoke rising over the estate from the burning houses of the evicted tenants, but the bitter irony was lost on him because he didn't speak Gaelic. He died shortly before the castle was finished.

The current owners, Tom and Marjorie Nelson, are warm and friendly, and Tom's mother has written a lovely book about the castle's history.

We really only snoped around this one this time. We did the tour a few years ago, but for whatever reason we were underwhelmed. I've read that Stirling Castle is far more impressive and has been tampered with less over the centuries. We also apparently couldn't take photos inside because we have none. It looks quite impressive from a distance, though. 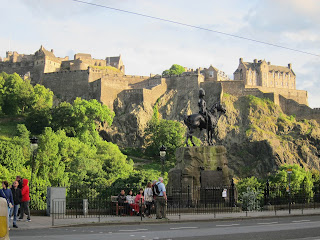 Did Mary, Queen of Scots stay here?  Yes! She even had a baby here - the future King James VI of England and I of Scotland, as in the King James Bible. 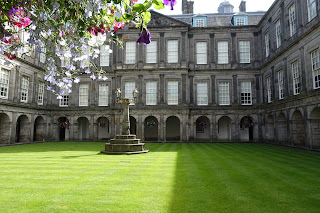 Holyrood is in Edinburgh at one end of the Royal Mile, and it is well worth a visit. Visitors are not allowed to take photos inside, but they are allowed in the abbey ruins. I have long wanted to visit Holyrood, and I was not disappointed. The tour is self-guided with an audio guide, which is perfect. You can decide how fast or slowly to go through the palace and how much detail you want to pay attention to.
Adult Admission: ₤12.50, includes audio guide

Did Mary, Queen of Scots stay here?  Yes. She lived here in the 1560s. Her secretary and favorite, the Italian David Rizzio, was murdered in her chambers in 1566, while she stood helplessly by. 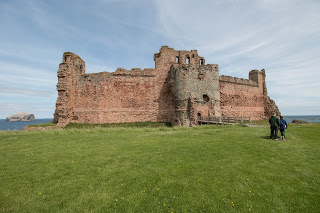 These adventurous ruins are east of Edinburgh near North Berwick on the coast. It was built in the 1350s and effectively destroyed by Cromwell in 1651. Visitors can explore the ruins at will (it's well sign-posted but I recommend buying a guide for the full story) and climb several different staircases to find various hallways, battlements, and even a prison with a loo! Even if it's a warm day, bring a jacket because it's windy on the coast and up in the castle! Don't leave a single corner unexplored. 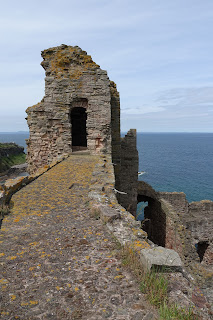 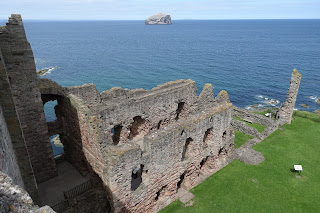 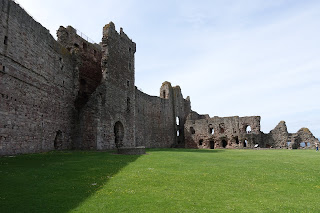 Tantallon may be a bit of a challenge for anyone who is afraid of heights, but there are railings and high-enough stone walls that there is really no danger of falling, You could jump over those, but why would you do that if you're afraid of heights? The one photo above makes it appear as though there are no railings, but I'm standing behind it - you can't actually walk along that battlement shown without the railings.

Bass Rock is a feature visible from the ruins. This little island was a refuge for Saint Baldred in the 8th century, a royal residence (there was a castle here in the 1400s), a garrison in the 1500s, a state prison in the 1600s, and finally a beacon - a lighthouse was built on the island in 1902, and a lighthouse keeper lit the lamp every day until 1988! Now the lighthouse is automated and the island is a bird sanctuary.

Did Mary, Queen of Scots stay here?  Yes, in 1566 on her return to Edinburgh after a royal progress in the eastern Borders.

These castle ruins are accessible by a single-track road not far from Tantallon Castle. My photos don't show much, but again one can climb around a bit. There are signs telling what you're looking at, there are two pit prisons, a kitchen and dining hall... And it's quiet there. The car park is large enough for 2 1/2 cars. If you visit Tantallon, which I highly recommend, do not miss a stop at Hailes. 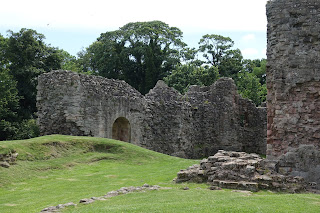 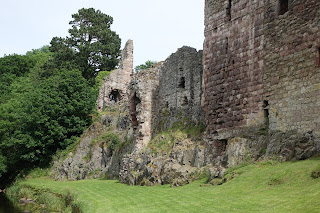 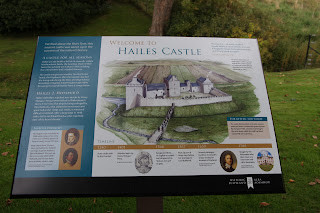 Did Mary, Queen of Scots stay here? Yes - as you can see from the above sign, in 1567, before her ill-fated marriage to her third and final husband, Lord Bothwell.

There are other Scottish castles and ruins I still want to see when we return - Linlithgow, Callendar House, Stirling Castle, and others.

Which castles in Scotland do you recommend??

Previously in this series:
Hills and Hikes

Posted by Ami im Schwabenland at 20:38