I've never actually written a movie review before except when I was asking my students' parents for permission to show a German movie in class, and those weren't really reviews. I just watched this new release yesterday, though, and I feel like trying my hand at writing what I thought of it. 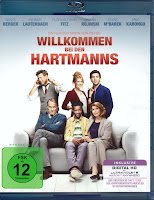 The film is about a privileged three-generational family and their relationship problems - Opa should retire but doesn't want to because he's trying to fight off "being old", Oma is a retired teacher who wants to save every unfortunate creature she comes across, including the mice her cat catches in the yard, their son is a divorced workaholic who ignores his teenage son, their daughter is 30 and still studying, having changed her course of study six times, and the grandson is experimenting with all kinds of teenage things from hip-hop to drugs.

And the Oma decides to "adopt" a refugee.

I am willing to say that I'm glad I watched the movie, but I'm baffled by the praise: "Die Komödie des Jahres" (Bild - "the comedy of the year") and "zum Brüllen komisch" (die Welt - "howlingly funny"). Deutschlandradio said it "zählt zum Besten, was das deutsche Kino zu bieten hat" (counts among the best that German film has to offer") - ouch!!

You can watch a trailer here.

It is billed as a comedy, but unfortunately too many of the comedic bits get ridiculous. The hippy former colleague of Oma brings "der Afrika Club" to the Hartmanns' house after she hears they've taken in a refugee from Nigeria and throws a spontaneous wild party which includes a zebra and a howler monkey. Opa has a mild heart attack, and while his daughter's boyfriend (a young doctor he can't stand) is ministering to him, a swat team bursts through the living room windows to arrest the refugee, Diallo (but then they are ordered to abort the mission because Diallo is not the militant they're looking for). Opa, in his fight against getting old, hangs out with a creepy plastic surgeon friend of his who goes to discos to hook up with younger women, but he can't hear anything anyone says to him because the music is too loud. There's a Pegida-like protest outside the Hartmanns' glamorous home after the daughter's stalker finds out a refugee is living with them...

The most likeable character in the movie is Diallo, the Nigerian, and I wish the story focused more on him. He seems like little more than an incidental catalyist, though. The writers didn't allow him much depth, though the actor did the best he could with the content he was given. He often speaks volumes with just his eyes.

There were several opportunities for conversations that the writers just dropped. Diallo occasionally tells his hosts what he thinks of their behavior toward each other, such as when the daughter gets in a fight with Opa. Diallo tells her she should not speak so disrespectfully to him, but the discussion ends there. After the grandson tells his father on the phone "Either you come back [from Shanghai] to help Diallo, or you're an asshole for all time!", Diallo tells him he should respect his father and not speak to him like that again. The boy just rolls his eyes, and that's it. Diallo tells the daughter she is old and should be married with children, and she responds that things are different in Germany. Any of those moments could have turned into an exploration of cultural differences, but instead the writers just dropped it.

I wish the writers had treated the subject matter with respect and sensitivity - along the lines of The Blind Side. The movie surely had its moments, and I even got choked up a few times - when the focus briefly turned to Diallo and his struggles and hopes. But I think that had more to do with thinking about the refugees I know and the stories they've shared with me than the scene I was watching.

The supposed subject matter of this film (refugees integrating into German society and Germans overcoming their fears and reaching out to asylum-seekers) had so much potential, but the focus is far more on the wealthy, privileged family and their First World problems. It and the characters - except for Diallo and the daughter's eventual boyfriend - are superficial and cliché-ridden.

I don't really know who the intended audience is. I wouldn't recommend it to someone who is looking for an honest portrayal of what is happening in Germany these days, nor would I recommend it to someone who wants to see an hilarious comedy. It's not a film that would change anyone's mind about or encourage one to think meaningfully about refugees, Islam, Germans, cultural differences or family conflicts. And it's not that I didn't get the humor - I just think it missed its mark.

Never having awarded stars before, I'll give this movie two because I'm not sorry I watched it and because I had an idea what I was getting into.

This afternoon, though, I'm going to our shelves to find one of the many really good German films I have and watch one I think does fit in the "Besten, was das deutsche Kino zu bieten hat."

Posted by Ami im Schwabenland at 12:57