I love to read. I go stir crazy when I have to wait somewhere and don't have a book with me. I've even taken a book to the grocery store on Saturdays, knowing the lines at the check out can be really long and slow. Last week I was stuck in town for a few hours because my plans didn't pan out, and I was cursing myself for having decided to leave my book at home, thinking I wouldn't have time to read anyway. I wrote a letter to my daughter instead, and then after three hours remembered that I have a Kindle app on my phone. I should mention that I'm an old-fashioned reader who likes real live books - not machine versions of books (though I admit those are handy for traveling).

I have a problem, though, or maybe an illness or defect. I have rarely read a book in which I did not at some point find a mistake - sometimes in information, but usually in language. "Lay" instead of "lie,"misspellings, missing or wrong words ("the" instead of "they")... I swear, I'm not looking for mistakes - I just notice them. Last year I read a print version of the ebook* of Little Women, and it was so riddled with errors I nearly threw it in the trash. I wondered if the person doing the typing or transcribing knew English. I think that's one reason why I am steering away from ebooks. I'm assuming someone has to type the text for all those ebooks unless they're scanned by some fancy text-reading machine, but either way mistakes creep in that weren't in the original.

*I don't actually know if it is "ebook," "E-Book," "eBook" or something else. I've seen all versions.

Don't get me wrong - I make mistakes, too. Countless times I have come back to a recent or old blog post of mine and found errors while rereading. I always fix them and I also appreciate my readers who let me know when they find a mistake (mainly M, my daughter, and my mom do this). I don't think making mistakes makes someone an idiot, but my own mistakes really bother me.

Sometimes I wish I weren't so "good" at spotting mistakes, because they annoy and distract me, especially when I'm in a grumbly mood. I read enough in German these days to find this happening to me with German books as well. I suppose part of this comes from years of teaching writing (in both English and German). I truly enjoy editing. but why is it so much easier to spot mistakes in other people's writing than in one's own??

Just yesterday I came across a pretty significant error in a book whose purpose is to teach foreigners about life and living in Germany. I begin teaching the orientation course part of this integration course on Monday, and I'm learning one step ahead of my students. The book is new to me, the subject is new to me, and the course is new to me. I need to be prepared!

The error appeared in a paragraph about the Bundestag, which is the German parliament. If I knew more about my own government, I could confidently say it's equivalent to the U.S. senate - but I don't know and it doesn't matter (because my students don't need to compare it to the U.S. government).

There are several things that don't mesh here. I know that the Bundespräsident is not a delegate of the strongest faction in the Bundestag. And how can he have the second highest office after himself?

Since I need to be certain before I go questioning the information in a textbook, I waited for the Formula-1 qualifying to be over (Go Nico!!) and asked M. Sure enough, where the writer wrote "Bundespräsident," he should have written "Bundestagspräsident." 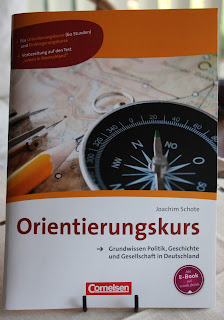 I then checked out the book on Amazon and found only one review. The reviewer also mentioned mistakes. Crap! What other ones are there? This is not good. But in general, I like the book! It's quite straight forward and just includes the facts. Another book I looked at was thicker and longer because it included lots of puzzles, games, a cartoon or two, unnecessarily complicated and time-consuming activities... Since this phase of the Integrationskurs is only 12 days long (60 hours), there's no way we could get through all that. The Cornelsen book above may be imperfect as most textbooks are, but it presents the most important information concisely. I think my adult students will agree - just tell me what I need to know to pass the test. Whatever else I want to learn I'll do on my own time.


Am I alone here? If you're a reader too, do you regularly find mistakes in the books and novels you read?