I picked up my unbefristete Niederlassungserlaubnis this morning, which says I can stay as long as I want to, unless:

I'm pretty sure I'm good on all those accounts. I don't intend to misbehave, although I do occasionally forget my Kehrwoche and have been known to vacuum during the Mittagsruhe. I surely won't remain away for more than six months voluntarily, and I can't even imagine a way or purpose of leaving that would be ipso facto not temporary.

This makes me wonder just a little bit about the Muslims living in America who were either born there or who naturalized. Trump says he'll round them up and boot them out. Do they not have something like my Niederlassungserlaubnis? Especially the Muslims who were born in America and who are U.S. citizens with U.S. passports...can he really kick those folks out because they practice the wrong religion? (Obviously he can't, which makes one wonder why he keeps saying he can.)

Luckily the leader of Germany does not have that power, so regardless of whether I practice the right relgion, the wrong one, or none at all, I cannot be kicked out because of my beliefs.

Since M also picked up his renewed deutscher* Reisepass (passport) this morning, we celebrated tonight with a beef tenderloin cooked sous vide- style then grilled, and Bratkartoffeln (because I'm in charge of the sides and my skills are limited). I'm going to claim we also had a  healthy salad with the meal. 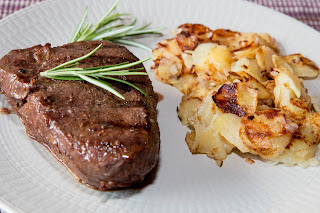 It was farking delicious and perfectly cooked to my preference of "the light side of medium." Why would I ever go out for steak again?  Oh, and we have leftovers for tomorrow because I bought more than twice what you see here. It was on sale this week.

Now the Portugal-Wales soccer game is on, so it's time to close. I am so rooting for Wales!! Their passion and energy is inspiring, and I like to cheer for the team that is not necessarily expected to win (unless that team is playing against Germany).

*M has dual citizenship, so he also has a British passport. But he's going to wait and see what the hell happens over there before he goes through the hassle of renewing that one.