My daughter and I have both been horse lovers and riders since our respective childhoods. I admit without apology that I influenced her a bit mercilessly: buying her stuffed horses to play with, decorating her room with the Breyer models that survived my youth, reading horse stories to her, watching every horse movie I had and could rent, and getting her on pony rides from the time she was old enough to grasp the saddle horn. She started riding lessons at age 11 and less than a year later we were leasing her a horse. He was Boomer, a chestnut National Show Horse (part Arabian, part Saddlebred).


I don't know when I introduced her to Marguerite Henry and her horse books, but we both remember her pop-up book (1993) and the last of the Misty books, Misty's Twilight (1992), and my daughter did a class project on the annual pony penning festival on Chincoteague when she was in middle school. 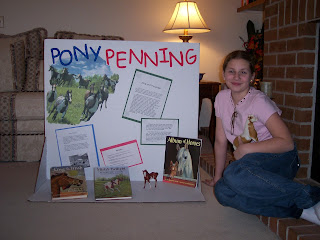 It was therefore somewhat logical that we should make a trip to Chincoteague Island, Virginia when I flew over to visit her last month. We chose Holiday Cottages for our 2-night stay and were very comfortable. We stopped at a grocery store before driving onto the island and cooked both nights, which saved money. The beds were comfortable and the location was great.

We first explored the island to get our bearings, and then went to the museum. The museum is really a must for anyone visiting Chincoteague (admission $4). You'll see the Misty exhibit and learn about the history of the island as well as island life. I admit I could do without the taxidermied Misty (Stormy, one of Misty's foals, was away being restored) because she looks so much more beautiful in photos, but there she is. 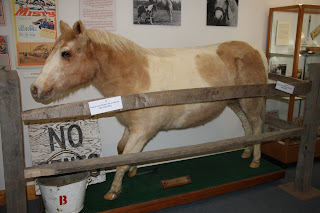 Then we walked along Main Street and found the Misty statue and the theater in front of which Misty's hoofprints are set in the sidewalk. 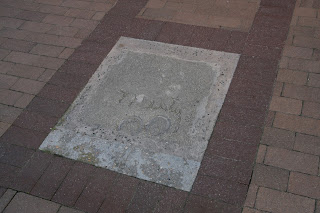 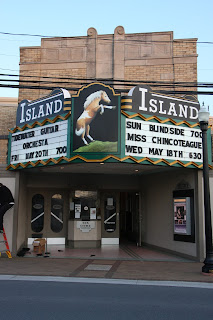 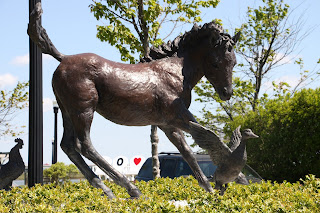 The next morning we went to Sundial Books, from which my daughter had ordered a hardcover copy of Marguerite Henry's Misty of Chincoteague. She also bought a Chincoteague sweatshirt, and I bought a ton of postcards. We were there before the tourist season starts, which was perfect for us. We almost felt like we were the only tourists on the island!

We also found the graveyard where the Beebes are buried.  The Beebe family played a main role in the Misty story, both the fictional version and the actual Misty story, which I find more interesting! 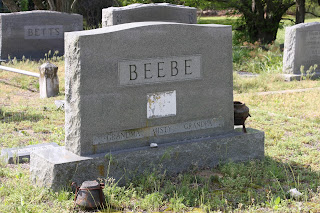 We were mainly biding our time until our boat tour started. She'd booked a "guaranteed pony tour", and it was well worth it. Captain Dan, who grew up on the island, apologized a lot for the uncooperative weather - it was quite windy and a little wet - but I hadn't really expected anything different. Instead of going all the way around Chincoteague we would have to go most of the way between Chincoteague and Assateague (the island where the wild ponies live) and then come back. That turned out to be perfect, because we got closest to a band of ponies on the way back - which we would have missed had we gone around the island.

Dan knows the ponies and was able to identify the various stallions. He also told us about their behavior, and on a few occasions we then witnessed what he had descibed (like stallions peeing on poop dropped by other horses to mark their territory - nice).

I would write more about the ponies and their habits, but how about just more pictures of ponies?? 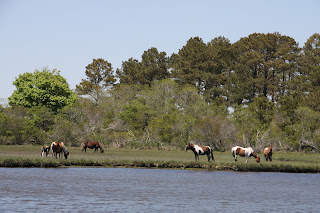 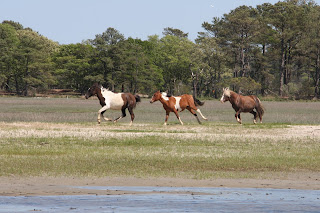 If you really want to indulge, click here to see stunning photos of beautiful wild ponies, taken by a photographer who lives on the island and knows the ponies.

We also drove over to Assateague Island, which is where the ponies live - and no humans live there! Happily, on the Virginia end of the island the ponies and the beach-goers are kept apart by strategically-placed fences. This means we can't get close to the ponies, and I think that is best for them. Too many tourists are clueless when it comes to wild animals.

The story of the ponies is quite interesting, if you're into horses.

The island of Chincoteague also has a history and culture apart from the ponies that is worth exploring, and along with many informational signs and books available, there are numerous tours one can book to learn more from those who live on the island. 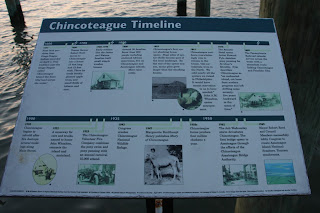 Missing from this timeline is that the Gingo-Teague tribe, who was living here when the white men arrived in 1671, were driven from the island a year later. (source)

My daughter was mainly in charge of planning this trip to Chincoteague, and the only part that was not enjoyable was the longish drive there and back (roughly 3 1/2 hours from Philadelphia). The highlight for both of us was seeing the ponies, of course, and it was a fun mother-daughter trip.

Posted by Ami im Schwabenland at 08:00