The Tools of Cooking

Amazon always knows when we've attended a Kochkurs, because M's shopping cart fills up with gadgets and utensils we can no longer live without. Ever since our first Kochkurs back in 2013, we have been buying things for our kitchen that Martin S. (the Chefkoch) demonstrates or has us use - not because he encourages us to do so or is advertising these products in any way, but because we see the value of having a well-fitted-out kitchen rather than making do with what we had before we knew better.

Our next Kochkurs is scheduled with our neighbors in early April. Cooking is something we truly enjoy doing together, and we are humble enough to admit that we have a lot to learn - especially from a pro!

The other day I decided to gather as many things together as I could think of that we have either bought because of the Kochkurse or that we happened to already have but used in a Kochkurs. I probably forgot a few things, such as the Fleischwolf (meat grinder), which just arrived last week, but since we haven't used it yet and it was too large for the photo, I'll save that for a future edition of this post. 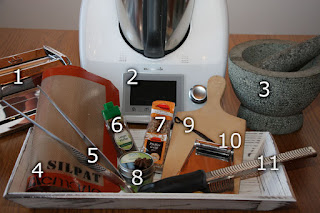 Our pasta press is only about two weeks old. We bought it for making Maultaschen after our recent Schwäbischer Kochkurs, and it's brilliant! We were able to get our dough thin enough, which was one of my problems both of the other times I tried to do Maultaschen. Just today we also made homemade noodles to serve with Gulasch, and they were fabulous - and easy! It may have been psychological, but they tasted better than dried noodles from the bag.

Ok, this baby is great, but holy-hell expensive (and not serviced or sold in the U.S.). We've used it for a bunch of things and had a healthy mixture of successes and failures - the applesauce is to die for and the smoothies are really good, too. Steamed potatoes and a fish dish, not so much. Despite several failures, we are still glad we bought this thing.

Ok, in fairness, M has had this huge and heavy thing for years, but Martin S. confirmed this is the one to have. If you ever want to buy one of these to grind your own spices, get the heavy mother. The little ones - which fit better in the cupboard and won't break your tile floor if you drop it - are not worth the few Euro they cost.

We used this in the Asiatischer Kochkurs for a carmalized crispy thing to garnish our dessert. I have to admit we haven't used it yet at home, but I keep intending to. The little garnish was so easy, and delicious! I'm sure the mat can be used for lots of other fancy things - more research needed.

We hardly ever use our pinchers with the big fat hand-like ends any more. If I need to give a gift to someone who is starting outfitting a kitchen, I would give this. It works for pretty much everything from noodles to meat. You just have to be careful not to poke any meat you're flipping because you don't want the juices to escape. Don't go for the cheap Pinzette; get a good one.

Maybe the rest of you knew about these spices before, but I didn't! Langer Pfeffer is a stronger, hotter version of pepper, especially useful in Indian dishes. Weißer Pfeffer is good for cooking because it doesn't look like little dark flecks or bugs in the final dish. Regular black pepper is only for the grinder on the table because people want to see the pepper they sprinkle on their food. Sternanis tastes and smells like black licorice, so it needs to be used carefully. It's fun to experiment with spices we haven't used before.

I'd never used vanilla beans before moving to Germany, and most American recipes call for vanilla extract anyway (which isn't available in Germany that I've seen). Holy cats, though! Baking with real vanilla is so much better anyway. The more we learn, the more we cook with real and fresh ingredients rather than just the flavors.

We've been doing our own Spätzle (homemade Swabian noodles) for decades, but recently we've taken to using new-fangled contraptions to make the job easier and the Spätzle more uniform in size. The traditional way to make Spätzle, though, is to scrape the dough from the wooden board into the simmering water. After our last Kochkurs I dug my Spätzlebrett out of the "kitchen extras" box in the basement, and now it has its proper place in our kitchen!

This little bugger is sharp and dangerous as hell, but it works best for grating lemon or lime peels, and especially ginger. We had been using our multipurpose grater until we saw how much finer the zest was with this tool. We bought one and store it in its protective sheath! 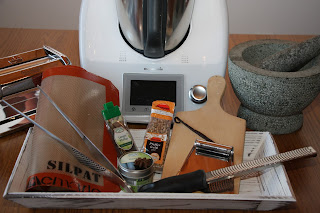 What tools and gadgets do you have in your kitchen that you have recently discovered or couldn't live without?

Posted by Ami im Schwabenland at 21:59

Email ThisBlogThis!Share to TwitterShare to FacebookShare to Pinterest
Labels: cooking