It's Just a Word

On Thursday evenings after dinner M and I watch a cooking show called "die Kochprofis". Three esteemed chefs from around Germany come to a restaurant that is failing for any number of reasons and try to help the owners out to turn their business around and be successful. The chefs all own their own restaurants, including one - Frank Oehler - who has a restaurant in Stuttgart, and they work very well together as a team.

Although there is sometimes too much silly drama, we watch it for the cooking tips and to see their reactions when they do the initial "Testessen" - their first step is to order a bunch of items from the menu and see what kind of quality they get, assess the prices, and check out the service. Usually they are able to work with the cooks, service personnel, and owners and save the restaurant, but sometimes the place closes.

But this post isn't really about that show. It's about cursing, swearing, and cussing in Germany - basically using the kinds of words that led to my parents threatening to wash my mouth my brother's mouth out with soap when we were young.

Where's the connection? Look at the shirt Andi (on the right) was wearing in a recent episode of "die Kochprofis": 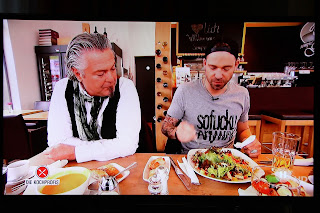 I don't know what the bottom part says, but it seems to be some creative version of the word "anyway."

This is something I've only realized since moving here - many Germans have no idea how offensive and shocking "the f-word" is. If he knew how inappropriate it is and that English speakers watch their show, I highly doubt Andi would have worn that shirt any more than he would have worn a shirt that says "fick dich".

I am not dissing the show, and my intention is not to criticize Andi's fashion decisions. It's not just about this t-shirt. We also like to watch "Schlag den Raab", a periodic prime time game show in which a contestant competes against well-known entertainer Stefan Raab in a bunch of silly games, trivia contests, and physical challenges that goes on for hours, and it is extremely common for Stefan to yell "FUCK!" when he screws up. Granted, with the German accent it sounds more like the last name of the biathlon competitor Jakov Fak, so "FAHK!", but still. I'm not personally offended by the word; it just takes some getting used to hearing and seeing it so publicly.

A teen comedy (rated for 12-year-olds and up) that came out a year or two ago in Germany is called Fack ju Göhte ("Fuck you, Goethe*"), and a fourth grader walking past me on his way out of school the other day shouted that as he opened the door. I'm guessing he had no idea what he was yelling, but it was a bit of a shock for me. That word can't even be used in the dialog of a movie rated lower than R (not for children under 17) in America, if I'm not mistaken.

*Johann Wolfgang von Goethe (1749-1832) was one of Germany's most famous writers and poets.

Just two days ago on the train a group of school kids settled in the previously quiet car where I was, and the first thing I heard as they started looking for seats was "Fuck!" followed by "Shit!" for no apparent reason (there were plenty of seats).

Curse words in German or English are not censored on the radio or on TV here - they're just words, I guess. And again, it's important for English speakers who might otherwise be taken aback to understand that Germans just don't get how inappropriate some of those English words are. Ok, among friends it's not a big deal to cuss - but to hear "fuck" and "shit" rather than "BEEEEEP" on TV, in songs, and in conversations in the school yard or to see them so prominent on a t-shirt... it's just strange.

But why do (some) Germans* think the word "fuck" is not that bad? I think I've figured that out.

*Disclaimer: I have to say that none of the Germans I know personally go around saying that word, and those I have heard use it are either in my generation or younger. I surely never heard that word here back in the 80s when I was on the exchange... Maybe this is an example of how language changes over the years.

It's a real hoot to watch American shows on "the man channel" (DMAX) about truckers, loggers, sasquatch hunters, moonshiners in Appalachia, and so on, because those characters curse with every few words, and the lips are pixeled out but the words aren't bleeped. You hear the English pretty clearly in the background but the German is dubbed over the top, and the swear words are totally toned down.

In this clip from German comedian Michael Mittermeier, he has recently returned from a trip to New York and has to unlearn how to insert "fuck" into every sentence, (just like we English speakers over the age of 35 have to unlearn inserting "like" into every clause). He shows how ridiculous this would sound in German.

Basically based on American TV shows and movies, comedy sketches, popular songs, and undoubtedly what they read online, Germans think Americans curse all the time and use "fuck" most often.

I'm not a prude, or at least not much of one. I have been known to curse like a drunken sailor when in pain, but I normally feel guilty afterwards. I use curse words in my blog when more creative adjectives just don't cut it. On the one hand they're just words. On the other, I wouldn't say "fuck" in front of my parents or Schwiegermutter - and they'll probably find it quite shocking to read it so often in this blog post!

I think Germans' casual use of "fuck" may be similar to Americans not understanding how intense the words "bloody" and "bugger" are to the Brits. We think they sound cute - at least I do! In fact, to Americans those are nice alternatives to the words we're not allowed to say. But - unless things have changed drastically in recent years - those are vulgar words in the UK - the equivalent of "fucking" and "fucker." British readers - am I right or wrong?

The typical German curse words are just not so bad. Really, the worst [non-blasphemous] ones are the equivalent of "damn" and "crap". When someone says, "Ach, dieses Scheißwetter!," he's only saying, "Ach, this crappy weather!" I have seen, however, in the English subtitles of German movies, where that phrase is translated to "this fucking weather."

It is no wonder the Germans think we Americans say "fuck" all the time, and that it must therefore not be a very bad word.

This whole use of English curse words in Germany is something I've started warning our exchange students about. I tell the Germans heading over to Sheboygan, Wisconsin very specifically which words they must avoid using in this very conservative community, and I tell the American exchange families that their kids will come across these "bad words" while they're in  Germany. I would share this post with this year's Sheboygan students and their families, but I am quite certain the parents would not allow their children (7th and 8th graders) to read it because of the uncensored and repeated use of "the f-word" in it.

I wonder why these words come across as shocking, vulgar, and offensive. Who decided these are the words we can't say? Why do we scold kids for saying "shitty weather" but not for saying "crappy weather"? Aren't shit and crap the same thing? And why, when I ram my toe into the foot of the bed, do I feel so much better after saying "Shit!" than if I'd said "Darn!"?


Ah, the mysteries of language...

Posted by Ami im Schwabenland at 08:03