I'm not gonna lie. I flippin' LOVE weißer Spargel (white asparagus). In this too, I fit in well with my German neighbors. Weißer Spargel is practically a cult over here - Germans go mad for it and sit on the edges of their chairs with bated breath chafing under the vexatious restraint of waiting for the announcement that....Spargelsaison ist eröffnet! Then they run, drive, crawl, ride, or frolic jubilantly to the nearest local Spargel farmer where they buy at least a kilo of the glorious stalks that were picked that morning to be cooked that evening.

Neither Germans nor I care that Spargel turns one's pee a funny color or gives it temporarily a strange odor. Nobody bothers about its subtly phallic shape. It's doubtful they even care about the health benefits of eating Spargel. It's just damn delicious.

Four days ago, Google's search page let us know it was time to get out our Spargeltöpfe (asparagus pots): 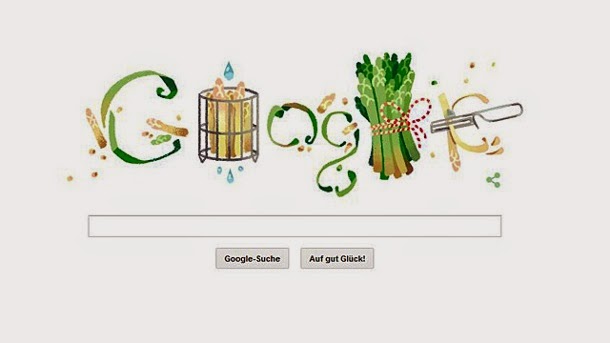 While there is green asparagus in that picture as well, that stuff is nothing special. One can get that almost all year round, imported from God knows where. It's the white which is beloved in Germany and that has a limited season, so Germans eat as much of it as they can while they can, knowing that's it again until next spring. The season starts around mid-April and ends on June 24th. Yes, that's right, every year the Spargel picking season ends exactly on June 24th. That's Johannestag, or the Feast Day of St. John. Why does the season end then? Because that leaves at least 100 days until the next first frost, which is how much time the harvested Spargel plants need to grow back and gain enough strength to produce a good crop in the next season.

There are even helpful sayings about Spargel to help growers remember the rules:

Germans ate an average of 1.5 kg of Spargel per person in 2014, which is why Spargel is the vegetable with the largest acreage of cropland in Germany (ca. 24,100 hectares).* That accounts for about 20% of Germany's vegetable cropland.

But enough with statistics that no one cares about. How do you cook this delicious goodness?!?

(Serve with salad and boiled potatoes.)

Mama Mia! This dish isn't pretty, but it's doggone tasty! While it's in the oven it is literally lying in a buttery white wine bath. I'm getting teary-eyed just thinking about it.

Don't like ham, cheese, or white wine? Slap a steak on it and serve it with homemade Hollandaise sauce:

I kid you not, every restaurant in Germany that serves German food has a special menu for Spargelsaison, so get it while you can. Remember, after June 24th, that's it except for the canned variety, which I had once in a crepe from a street vendor. Igitt!!

We're such snobs we decided to wait for the first pickins to be grabbed by others, and I'll drive to the Spargel farm next week for our first kilo. That's right - I love weißer Spargel so much that I will actually drive alone several km from our house down a scary curvy two-lane highway to a narrow two-way farm road that is only wide enough for 1.5 cars with ditches on both sides, just to buy this stuff freshly picked.

White asparagus isn't really a thing in North America. Americans, you have no idea what you're missing.