When you go to Vienna you should definitely visit the museums that appeal to you as well as attend a concert or performance. You're in VIENNA! Don't skip the music. But these sights and activities are not cheap. I'll write later about the things my MiL and I did that we had to pay for (and I'll include prices), but why not start with free stuff? Your pocketbook will suffer enough from entrance fees, ticket prices, and tours, so I'd recommend including also a self-guided walking tour where you can see some interesting and beautiful fountains, monuments and buildings that may challenge your physical fitness but won't burden your wallet.

I'll try to do this in a logical order starting at Stephansplatz, the square in front of the Stephansdom. Go all around the cathedral to get the full effect from the ground. You can also go inside and see some of the sanctuary, staying outside of the gated area. You can go around to the left and up close to the front of the side aisle. If you don't want to learn about the church, you can see this much of the inside for free.
We went into the church on Thursday evening and saw it like this with no people. On Saturday late morning it was so packed with tourists that the photo above would not have been possible. 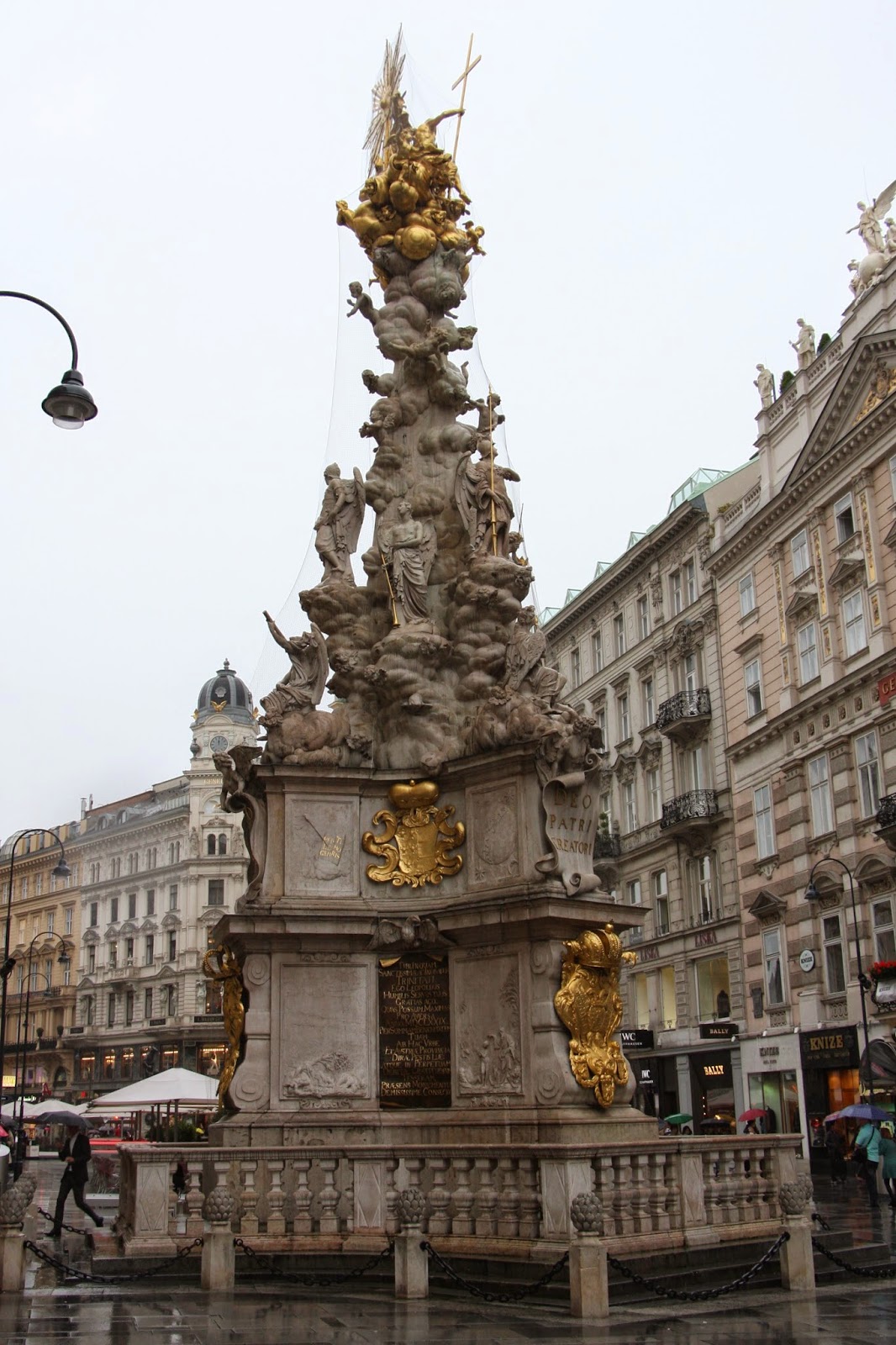 From there it's not far to the Pestsäule (Plague Column), one of the most well-known sculptures in Vienna. One of the last  big plague epidemics raged into Vienna in 1679 causing Emperor Leopold I to flee the city. Before leaving he vowed to raise a monument if the plague would end. This baroque column was finally finished and unveiled in 1693, and its message was and is that nothing other than the Catholic faith conquered the plague.

The Pestsäule is not far from the Peterskirche, which is also beautiful inside and worth a stop. I will do a separate post about the TEN churches we visited, so I won't add a picture here.

Head to the Hoher Markt next, where you'll see the Ankeruhr. The Hoher Markt is the oldest market square of Vienna, and archeologists found Roman ruins underneath the pavement. A pillory was located here in the Middle Ages next to the courthouse as well as a nuthouse. This square also served as a fish market for ages and was the end of the first water conduit of Vienna. The fountain on the square is called the Vermählungsbrunnen, or Marriage Fountain. The Ankeruhr is an art nouveau decoration for the arch between the Anker Insurance building and the neighboring house. Every day at 12:00 noon the doors of the clock open and twelve important figures from Viennese history parade past, including Marcus Aurelius, Charlemagne, and Rudolf I.

Next is the Judenplatz. Sadly, we missed this though we were very close and only realized it later. There is a memorial called the Nameless Library for the 65,000 Austrian Jews that were murdered during the Holocaust.

Then you'll come to a square called am Hof. Here you can see the Palais Collalto, where Mozart gave his concert debut at age six, as well as the Mariensäule, a column topped by the Virgin Mary erected in 1667 in thanks for Vienna being spared from an attack by the Swedish army during the Thirty Years' War. 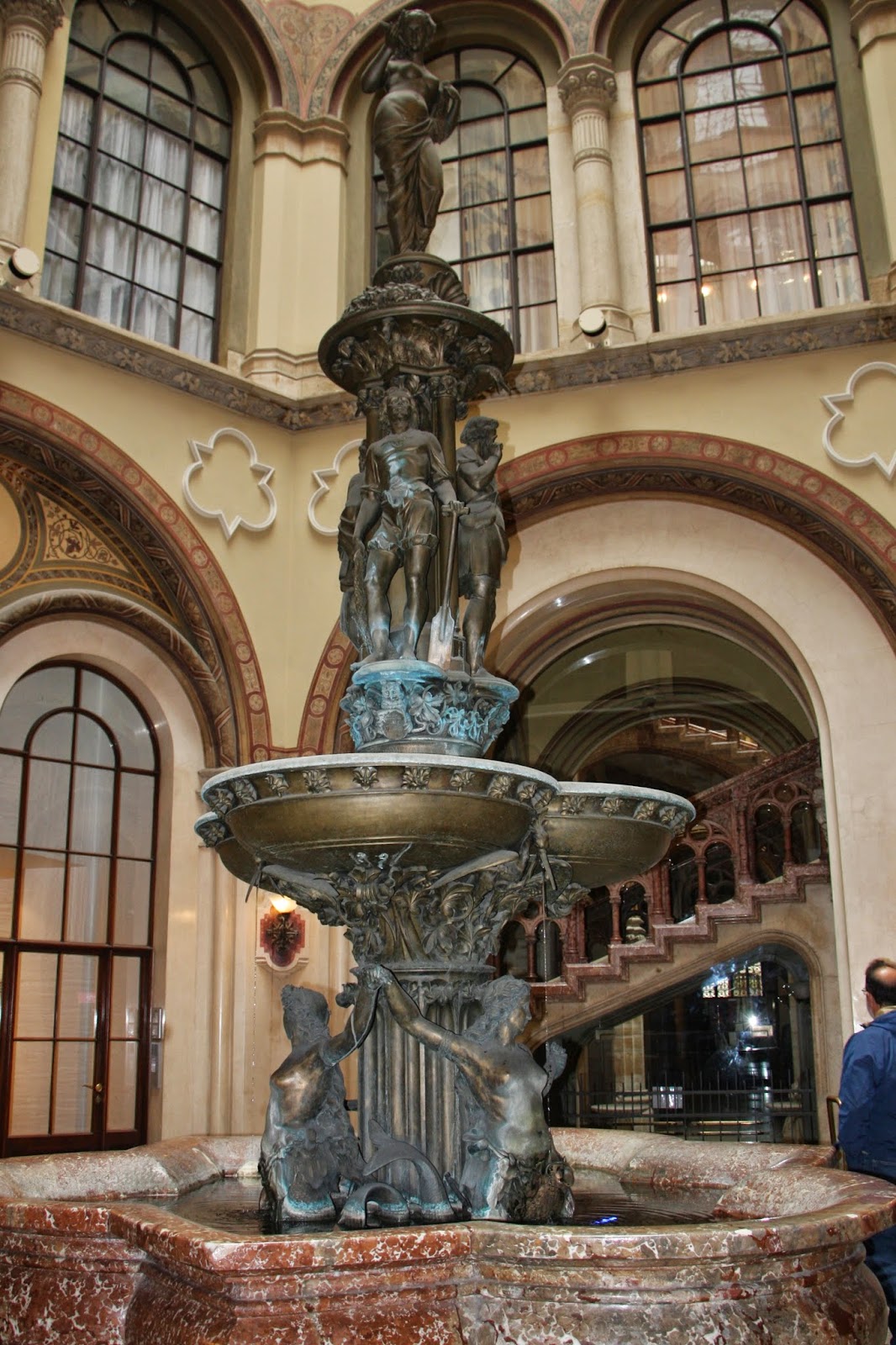 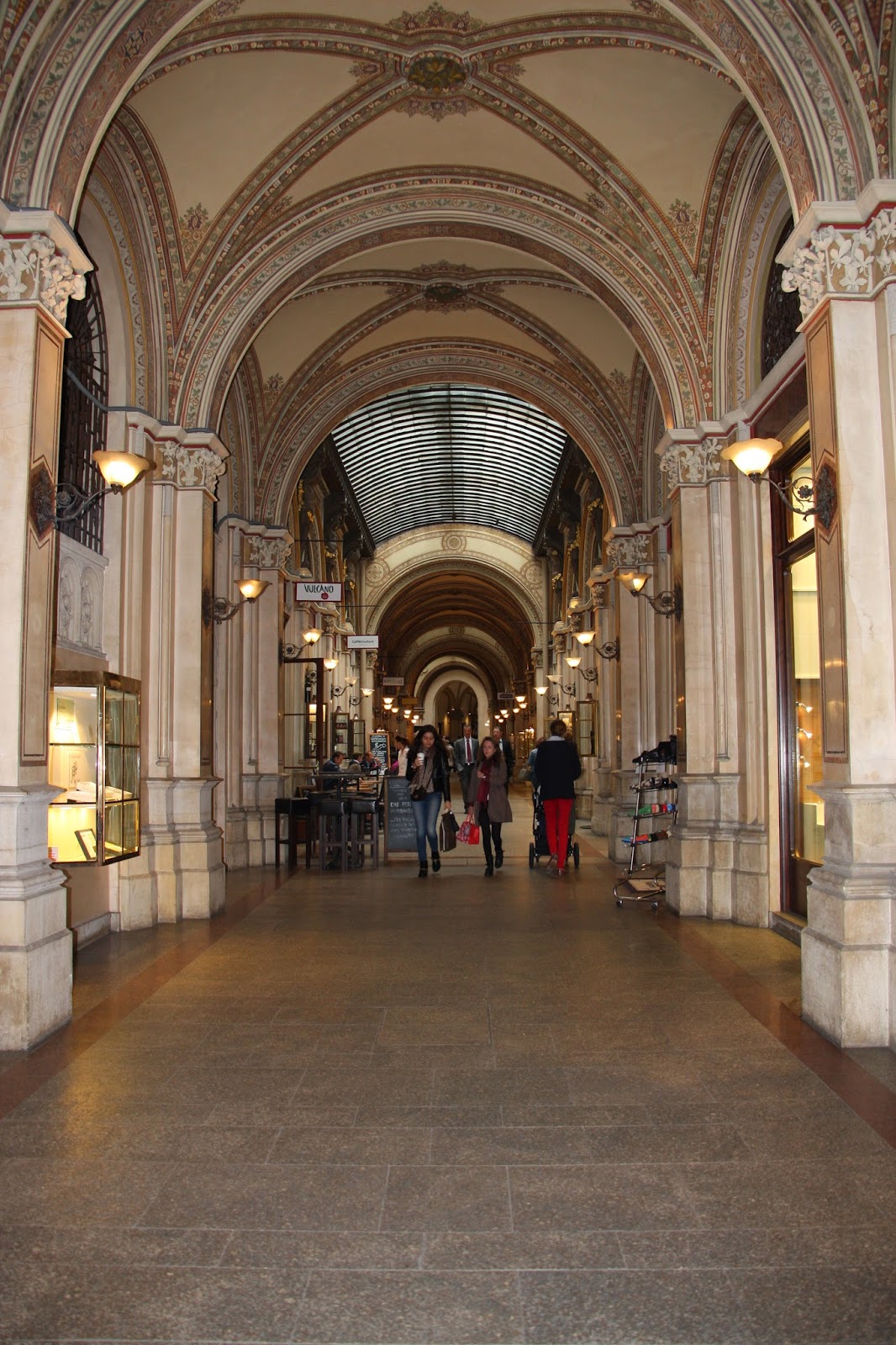 Now you're close to the area called Freyung. Look for the Cafe Central, though chances are it will be too full for immediate seating. It was raining by this time and the line went out the door, so we chose a different cafe in the Ferstel Passage (left) where we also found the Donaunixenbrunnen, or Danube Mermaids Fountain (right).

Head down Herrengasse, take a right at Bankgasse, and you'll find the Volksgarten, or People's Park. Here you'll see a beautiful rose garden if the season is right, the Theseus Temple and a memorial to Sisi, or Kaiserin Elisabeth.

At the southern end of the Volksgarten you'll find yourself at Heldenplatz (Heroes' Square), one of the most stunning squares of the city. The statues of Erzherzog (archduke) Karl and Prinz Eugen von Savoyen face each other, and you can see the silhouettes of the Rathaus, the Burgtheater, and the Parliament building over the trees of the Volksgarten. The sun even peeked out just long enough for a "wow effect".


If you venture through the Burgtor you will come to the Naturhistorisches Museum and the Kunsthistorisches Museum, which face each other with the monument to Maria Theresia between them. I'll mention the two museums in a future post because, of course, there are entrance fees. But the buildings are also impressive to see from the outside!

Come back to the Burgring and head roughly east onto Opernring, and you'll see monuments to  Goethe, Schiller, Kaiser Franz Joseph and Mozart.
You'll also pass the Staatsoper, the opera house of Vienna.

If you're not exhausted yet, turn right onto Operngasse and find the Secessionsgebäude (Secession Building). Inside - for a fee - you can view various art nouveau pieces including the Beethoven Frieze by Gustav Klimt. We went into the gift shop and looked for a picture of it to see what we'd be viewing and decided to be satisfied with photos of the outside of the unique building.

Now you're not far from the Naschmarkt, the open-air Markthalle. You'll find little shops here and small restaurants, kiosks, and fruit and vegetable stands. It's a great place to take a break from all the walking you've done, but especially on Friday afternoons and Saturdays, be vigilant against pickpockets. We didn't have any trouble, but I was warned by a friend and also my tour book.

Go next to Karlsplatz and Karlskirche, which I'll write about in another post. It costs to go inside the baroque church, but it's quite stunning from the outside.

Another building in this area that might interest you is the Musikverein with its pinkish facade, across the busy street from the Karlskirche. It's in this building that the well-known New Year's in Vienna concert is performed. [photo pending]

All of these buildings, squares, monuments and fountains are things you can see - at least from the outside - for free, and the list is by no means exhaustive. Most of the churches are open as well for tourists and prayer, and only the Karlskirche and Stephansdom charge a fee to fully enter and explore the church. I recommend planning a balance of costly activities and ones free of charge. There's no better way to explore die Innere Stadt (District 1) of Vienna than on foot. My MiL, who is in the second half of her 60s, and I did this walking tour in one day plus going inside churches, and ended the day at a concert. Another way to do it is of course to go to the museums and other attractions that interest you, and make a point to see some of these "free things" before and afterwards.

Writing about Vienna is making me yearn to return and explore more, seeing what we missed. Four days was surely not enough time!


Those of you who have been to Vienna - what did I miss that one can see, admire, and photograph
without paying an entrance fee?

Hotel and restaurants
Museums and tombs


Disclaimer: I do not, after a short four-day stay in Vienna, claim to be an expert on the city! I am writing these posts mainly for myself and for anyone who might be helped by my descriptions of what I did there.
Posted by Ami im Schwabenland at 10:37