I have recently been in to see a dentist, an orthopedist, and an OB/Gyn, and quite frankly, if I had been able to prepare my American self by reading a "What to Expect at your German Doctor's Appointment" article online, I would have done so. Therefore today I offer such a post for women who would like to know what they're in for.

The first thing you need to know before going to any medical appointment is that you check in at the reception desk (duh). Stand patiently while you are ignored, until the receptionist gives you clear and direct eye contact and says, "Bitte schön?" ("Wassup?"). You might find the reception desk behind a closed door, however. If so, knock on the door, wait for some voice inside to indicate you can enter, and go in. While you are being ignored, fish your insurance card out of your wallet and have it ready - you need to show it at every visit.

After check-in the receptionist will point in the general direction of another closed door, which may or may not be labeled "Wartezimmer". Go through that door, remembering to close it behind you, and say "[Guten] Morgen" if there is anyone sitting in there. (The "Guten" isn't really necessary - "Morgen!" is like saying "Mornin!" instead of "Good morning!") Sorry - only say that if it's before noon. After noon say "Grüß Gott" if you're in the south, "Moin moin" if you're way up in the north, or simply "Hallo!" if you can't remember or pronounce those. The important thing is to politely greet people in the waiting room, even though that's not done in the U.S. (at least not in Wisconsin).

Answering your cell phone and idle chit-chat are frowned upon in a Wartezimmer, so bring a book. During the 75 minutes I waited for the orthopedist the other day, a woman twice silenced and ignored her Handy (cell phone), and there were only a few words whispered between spouses, though it was standing room only.

If you have to go into the Wartezimmer again to get your jacket or umbrella after your appointment, say, "[Auf] Wiedersehen" to anyone still waiting.

I don't know why the Germans greet and say good-bye to fellow waiting patients, or why we Americans don't. I get the feeling it's a sort of "We're all in this death march together" sense of camaraderie.

But...on with the appointments.

I'm a freaking chicken and, like many, hate going to the dentist though I face the horror every six months. I stress about it for days before, and did so even in Wisconsin where I visited the same dentist for 15+ years and knew what to expect. The mere memory of the pain I experience when the hygienist scratches a sensitive spot of a tooth near my gum with her pickaxe is enough to make me cringe while writing this, even knowing I don't have to go in again until winter.

That said, I was really pleased with my teeth cleaning and the dental check-up here. No pain at all, lots of sucking out of the saliva build-up while the hygienist scratched around thereby preventing me from drowning, and warm water for rinsing. Nice! The only thing I have to grumble about is that the tool she uses to sand-blast my teeth before polishing sounds like a high-pitched drill. It's even louder and higher-pitched than my tinnitus. Really?? What is wrong with the engineers who design machines for cleaning teeth? Are they not aware of the agony caused by the sounds of those machines? Or maybe in their previous lives they were executioners who were also responsible for torturing suspects into confessing to crimes whether they committed them or not. I wonder what they do for fun on the weekends...

I have not yet had any major dental work done here, though I'm sure that's on the horizon. I have a fair bit of experience with root canals and crowns from the U.S., so I'll be able to offer a comparison when the time comes.

I've been in to see this guy because I have hip pain that I shouldn't have at age 45. I described the pain and he located it with some distressful poking, twisting, and wrenching of my leg. At one point he told me to lie on my side at the edge of the exam table, and he leaned on my hip while counter-pressing on my shoulder to the point that I thought this test must be to see whether I'll actually break if he tries to twist me like the top of a bottle of Bud Light. I didn't break, but if I were Catholic I would be at confession this morning repenting for my choice of words. It seems here that doctors are more interested in witnessing your level of pain than hearing your description of it.

The interesting part was the X-ray. I was led into a room/hallway with a back door, a side door, and a curtain covering the doorway to the reception desk and glass-walled Wartezimmer. "Oben und unten bitte freimachen" ("Please free yourself above and below"), or in other words, "Strip, please." Well, alrighty then! To hell with false modesty, paper robes, and a closet to change in. She did say I could keep my knickers on, which was nice. The rest of my clothes I could throw onto a stool next to the window. She then told me where and how to stand in front of the X-ray machine, and every now and then some nurse or assistant walked through the room from one door to another as I stood there wearing nothing but my knickers and blushing American shame. In the States I got a robe that pretended to cover at least half of me even during a mammogram!

But Germans are just not uptight about the human body. They are pragmatic, and since neither the doctors nor nurses waste time catering to your sense of modesty and shame, you can pretty quickly accept the idea that they see bodies all day long and you've got nothing they haven't seen before. When I had wondered what this particular appointment would entail, standing naked in front of an X-ray machine while assistants walked back and forth past me didn't enter my predictions. I couldn't help but wonder if any other patients would be walking through. That didn't happen, but I would not have been surprised.

Let's recap. What you need to know about visiting a doctor in Germany:

Right. This is a whole new ballgame, and men, probably one you don't want to play. I mean...stop reading. Now.  Go watch some football. 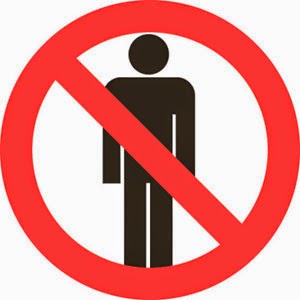 Ok, ladies. At least with this appointment you know you're going to have to "free yourself above and below," so that part is no surprise. In the U.S., you change in the room alone, get a paper robe and a sheet to cover all your shameful bits, sit on the exam table awkwardly covered while trying to hold the paper robe in place, and the doctor works around the modesty shields. Not here, Baby! Why waste money and time with paper robes and blankets? The doc came in, shook my hand, sat at his desk, asked all the usual questions, then pointed to a curtained corner and told me I should go there and "unten freimachen" ("drop trou") while he continued entering notes in his computer. I should then come out and sit on the fancy mechanical chair on the other side of the room.  Right. Just in my socks and t-shirt, bare-assed and blushing, I was invited to walk across the room and plop my prat in the exam chair. Good lord, these Germans. I had to wonder, "Why bother with the changing closet?"

He had no cavity spreader - just a sort of wand-like tool with a camera connected to the computer which he used to check things out. As he started his business, he said, "You can watch on this monitor here." Uh, no thanks. I'm good. There's an intriguing spot on that wall over there...

He finished recording measurements of my various essential organs and then told me to return to the changing corner and "oben freimachen" ("free yourself above"). Oh, I get it - only half naked at a time. Well, that's something. This second parade was only slightly less awkward, but it will take a good long time before I get used to marching partially naked across a room past a doctor sitting at his desk. This would not even occur to Germans as odd, though. "You're here to be checked out by your doctor. What do you expect?" I WANT MY FALSE SENSE OF DIGNITY; DAMN IT! I WANT MY PAPER ROBE AND SUPERFLUOUS SHEET! I WANT TO AT LEAST PRETEND THAT THIS IS NOT AWKWARD!

Everything else about this appointment is predictable, so the only hurdles you need to get over are the naked parade and lack of modesty covers. I'm sure all doctors vary in their particular techniques and exam room layout, but I would bet money on it that false modesty is just not part of the program no matter which doctor you're going to see.

My final bit of advice to American women who have to see a doctor in Germany is to spend a few days in a German spa hotel first, such as this one in the Schwarzwald. Try out all of their saunas. It's a nice relaxing experience, and it will get you used to the idea of being buck naked around strangers. That's right - it's not a myth. You do not wear a swim suit in a sauna in Germany, and only the greenhorns wrap themselves in a towel. Embrace the nakedness. At the very least, it's a great excuse to spend a weekend at a spa!
Posted by Ami im Schwabenland at 11:22