One of the greatest parts of second-language study is getting to know new clever words that one never thought of before but make a lot of sense. If you stay with a language long enough, you'll get beyond the basic vocabulary (days of the week, animals, food...) and begin to explore longer, more complicated words that sometimes don't have a translation in your native language. It's especially fun to discover single words that, when translated or explained in your first language, require a string of words rather than just one.

Back in July I posted my first list of fabulous German words that I think should be brought over into English. Today I offer nine more useful, efficient words that deserve mention. 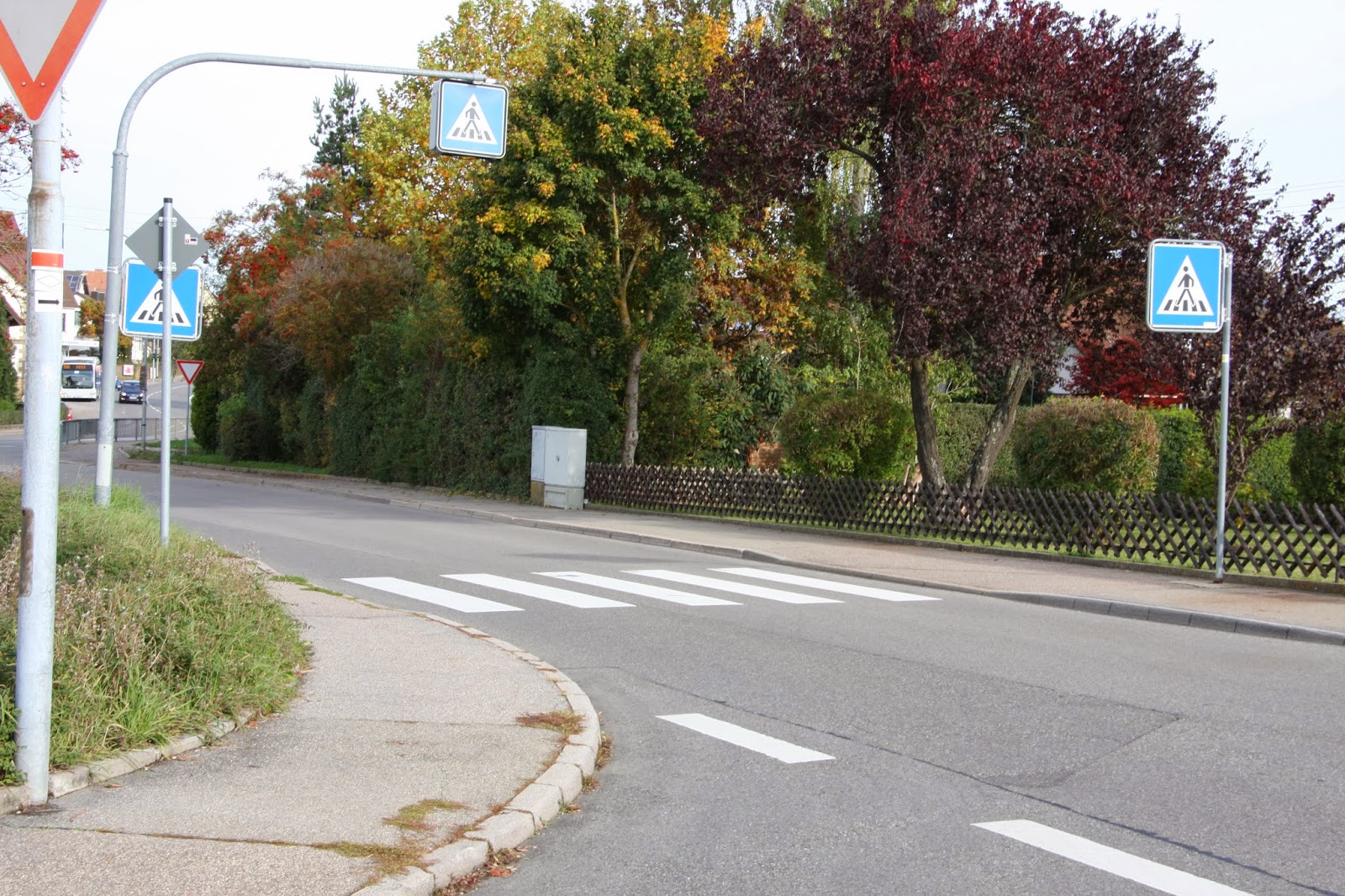 This translates easily into English as "crosswalk". In Germany the signs I've seen in the U.S. (in New Hampshire, for instance) instructing drivers that "pedestrians in the crosswalk have the right of way" are unnecessary. Drivers automatically stop on the approach to the zebra stripes the moment someone steps one foot onto the stripes. Often, at least in our town, they slow down because someone is near the zebra stripes. This piece of road is sacred to pedestrians and respected by drivers, even if they grumble to themselves for having to stop again. 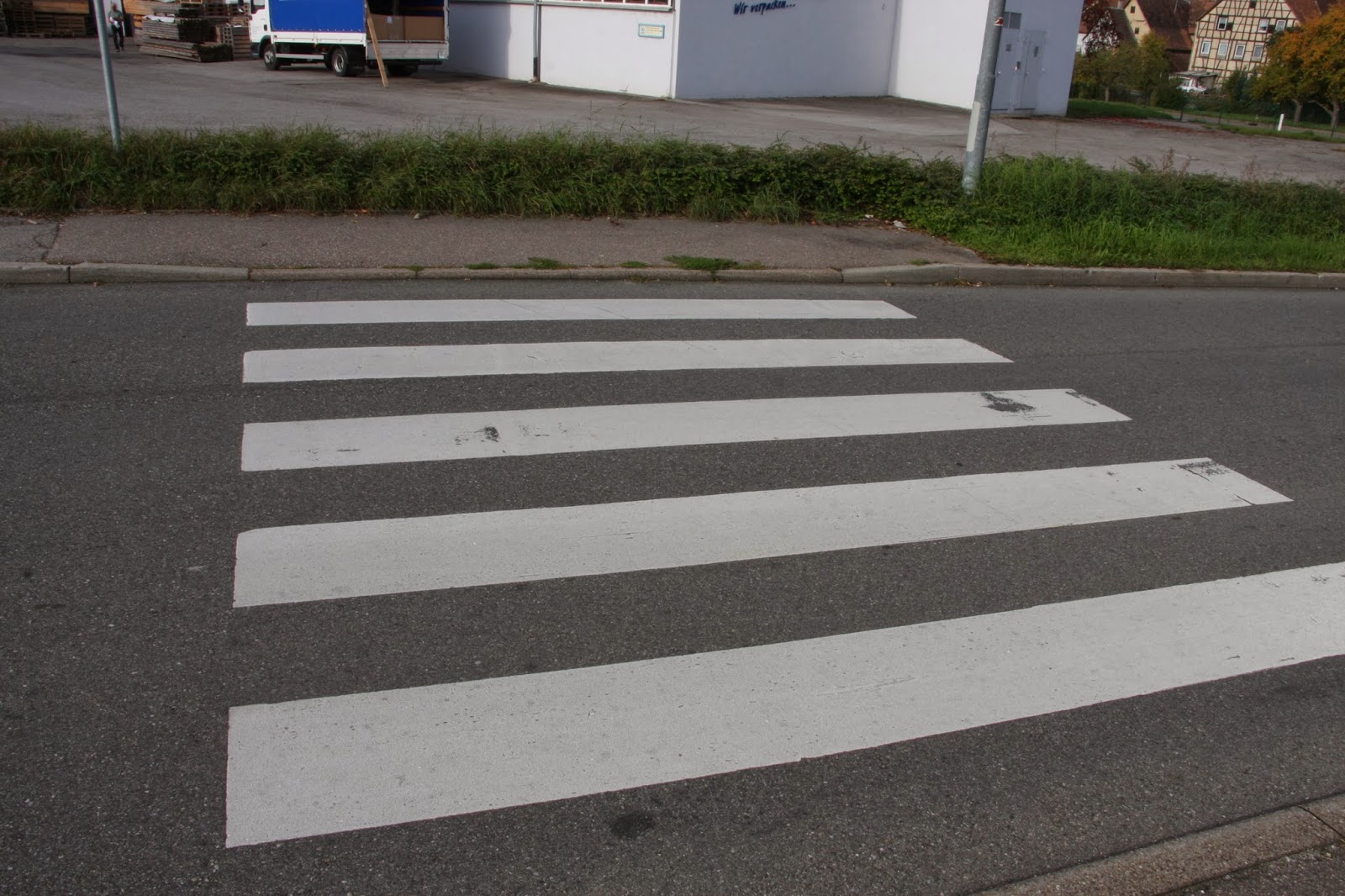 As you can see in the above picture, there are three clear signs screaming at the drivers that they are approaching zebra stripes. In some places, there are also flashing lights.

"Can't we just cross here?"
"No, it's safer at the zebra stripes, and you should be a good example for children."


2. -Muffel   (Grouch)
A -Muffel is someone who doesn't like or willingly participate in the thing attached to the word. A Morgenmuffel is a morning grouch - English speakers would say "She's not a morning person." A Gesundheitsmuffel doesn't care much about healthy living. There's no clever word for that in English, and again we would have to describe a person like that: "He doesn't take care of himself." The only English term that comes close is party pooper (Partymuffel), but that would be awkward for Morgenmuffel - "Morning pooper??" I don't think so.
3. Besserwisser  (Better-knower)
The English term, "know-it-all", wouldn't work for Germans because it's inaccurate. No one knows it all, but a coworker might act like he knows more about something than I do. Naturally, it's entirely possible that he does know more than I do.  Still, the better-knower is about as popular here as the know-it-all is in the U.S.. Unless the better-knower has a higher academic degree or title. Then it's easier for a German to accept that the better-knower does know better.
"My cousin is coming over for dinner next week."
"Fine, but keep that better-knower out of my kitchen. I can't cook with her staring over my shoulder."

4. Übermorgen  (over-tomorrow or tomorrow extreme)
Americans have started to use the German prefix "über-" to indicate an extreme degree, usually of an adjective. I saw an ad for some brand of toilet paper in a magazine a few years ago, calling the product "über-absorbant". The Germans have one word for "the day after tomorrow". "Morgen" means tomorrow, so "übermorgen" is way tomorrow, or tomorrow extreme. What can be more than tomorrow? The day after!
"When are you leaving for Hamburg?"
"Over-tomorrow, if all goes well."

5. Vorgestern  (pre-yesterday)
This is the same concept as "übermorgen", in the other direction. Vorgestern is the day before yesterday in one simple word. We need to appreciate the rare occasions when the German language is actually simpler than English...
"How long has your wife been in Hamburg?"
"She left pre-yesterday, and she comes back over-tomorrow."

If you think about it, übermorgen wird heute vorgestern:  Over-tomorrow, today will be pre-yesterday. Wow. That's deep.

6. Fremdschämen  (stranger shame)
If you read part I of "Fantastic German Words," you might remember that there are quite a few interesting German terms connected to shame. This word describes what we feel when we watch someone else make an utter ass of himself. I think the feeling is amplified when the stranger belongs to your Landsleute (countrymen). I'm surprised the term "Landsleuteschämen" hasn't made it into common usage. I felt this during the last election campaign when a program aired on German TV about the Tea Party Express.
"Each time the chairwoman opened her mouth on camera, I buried my face in stranger-shame."

7. Mitbringsel & Kleinigkeit  (little bring-along & smallness)
When you're invited to someone's home in Germany, you always bring a small gift, flowers, a cake, etc. You can go to a gift or flower shop and ask the salesperson for help by simply saying "I'm looking for a Mitbringsel." That tells her all she needs to know to offer suggestions: perhaps some decorative tea candles, seasonal napkins, or a small bouquet. It doesn't have to be expensive, but it should be thoughtful.

When you arrive at your friend or aquaintance's home, you hand her your Mitbringsel, which by now has become a Kleinigkeit. (If you have brought flowers, take off the paper wrapping before you hand the bouquet to her.) Even if you have brought the most expensive bottle of wine from your cellar, you still call it a Kleinigkeit, since Germans are more prone to understatement than bragging.
"Hi, Katherine, so good to see you again. Please come in."
"Thanks, Petra. Here's a smallness I brought for you."

8. Lumpensammler  (tattered rag collector)
A Lumpensammler is an important person-vehicle combination at marathons, bike races, and fundraising walks. It is the van and the driver who follow the route at the very end and pick up and transport to the finish line stragglers, persons with minor injuries or fatigue, and parents with over-tired children who thought they could handle the distance but can't. According to dict.cc a Lumpensammler is also the "last bus of the night," which in our area drives through shortly after 21:00 (9:00 p.m.). I imagine it's later in the big cities.
"Ugh...I just can't walk anymore. I'm exhausted!"
"No worries. The tattered rag collector will be along shortly."

9. doch  (this one word is a positive response to a negative statement, as in "Yes, he is.")
This might well be my favorite German word, and I have long wished there were an English equivalent. Since there isn't, it's best explained through examples.
"It's not raining yet."
"Doch." ["You're wrong. It IS raining."]

This won't be my last post about the beautiful German language, which gets such a bad wrap for sounding harsh and angry. Yes, the grammar presents a great challenge at times and there are as many dialects as there are counties, but German really is (or at least can be) a lovely language.

Posted by Ami im Schwabenland at 10:04