You're driving down the interstate, listening to the radio, probably singing along, shaking your head at the drivers around you who are drifting all over while talking on their cell phones, and suddenly the car in front of you swerves and you see a chunk of tire on the lane right in front of you. You're in luck and are able to navigate safely around it, heart pounding, glad you had both hands on the wheel!  Wouldn't it be nice if there were a way for drivers to warn each other of obstructions on the road?

In Germany, we have this. It's called Verkehrsfunk, or "traffic radio". This is a service that many radio stations provide for their region. As long as the driver has his radio or entertainment system switched on, he is likely to get traffic updates regularly as well as when something sudden or new shows up on a major road.  During the regular broadcast, often right in the middle of a song, the Verkehrsfunk busts in with its intro tone and the DJ makes her report: "Attention on the A8 Stuttgart toward Munich between Wendlingen and Kirchheim, there is a bag of peas lying in the right lane."  So if you are heading in that direction you know to slow down and/or get out of the right lane to avoid a nasty surprise or accident.

The interruption comes in even if we're listening to our own music on a CD or mp3 player, as long as the "Infotainment System", as Audi calls it, is on.

We have heard all kinds of warnings about various objects and obstacles on the Autobahnen and Bundesstrassen during our travels over the years. Just to mention a few of the more memorable ones:

a bicycle basket
an entire bicycle
tree branches
wild pigs (this one is fairly common)
a hub cap
people involved in an accident (Rule #1: Get onto the grass as quickly as possible!)
people on an overpass throwing rocks at cars (What is wrong with people?!?)
an ostrich who escaped from a zoo
a dog
a charcoal grill
several sheep
a picnic basket
a dresser drawer
a wheel (begging the question...where is the car that dropped the wheel??)
a board of wood
a shovel
cows
a mattress
a surfboard
a llama (escaped from a traveling circus)

The Verkehrsfunk also reports on something you will get very used to if you drive anywhere in Germany: Staus (traffic jams). Driving in Germany is a little bit like playing connect-the-traffic-jams. You just drive from one to the next, though sometimes (usually Sundays) you can manage an entire hour without coming upon one. For those of you who still think there are no speed limits on Germany's Autobahnen, sorry to disappoint you. Sure, there are stretches without speed limits, but the Staus are so frequent that you'll hardly get your rental car up to 200 km/h before you have to slow down again. 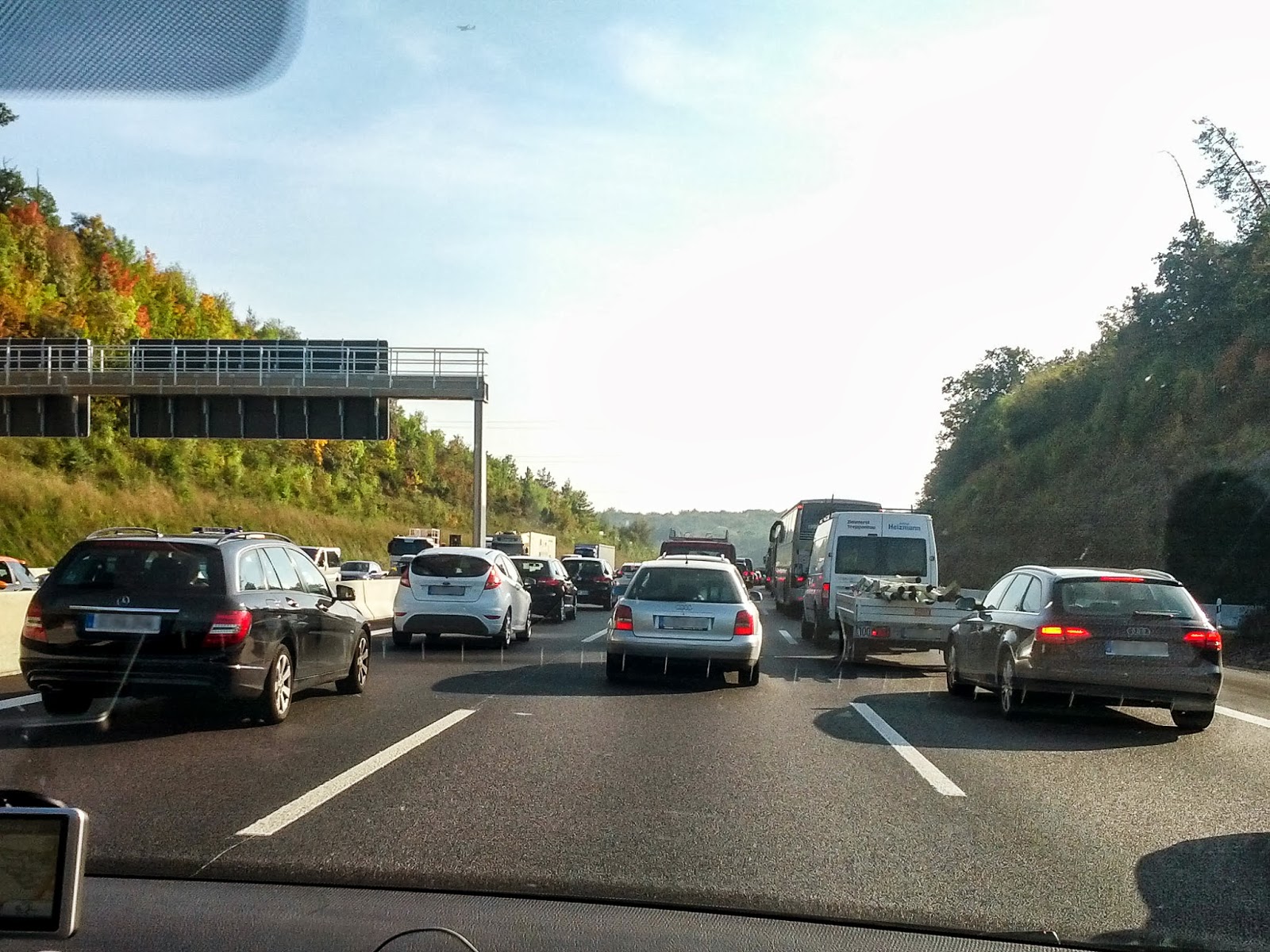 This service is helpful, though, and I wished for it often in Wisconsin. When you come to a Stau in Germany, it won't usually be more than 10 minutes before the Verkehrsfunk will let you know the cause of the Stau and how far it stretches. The length is reported in kilometers, of course, which still doesn't help me much, but M is usually driving anyway. Then you can decide whether to abandon the Autobahn and take another route or not. At the very least you know approximately how long you'll be creeping along, which should help with your impatience and stress level. No sense in getting your knickers in a knot if you know you're stuck for 12 km, because getting worked up isn't going to help. 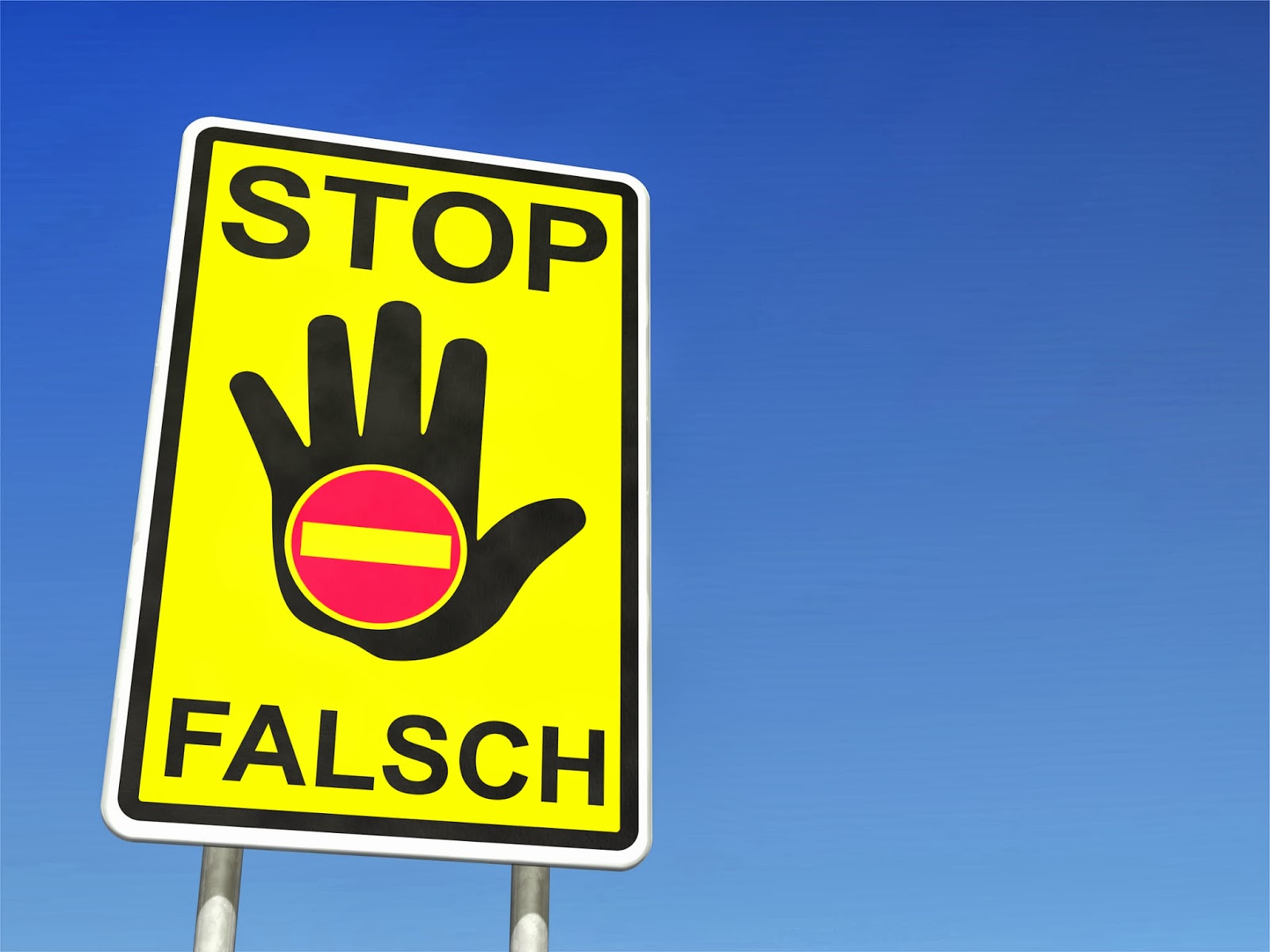 Perhaps the most important announcements the Verkehrsfunk makes are the warnings of Geisterfahrer ("ghost driver"). A Geisterfahrer is someone who is driving the wrong way on a highway, and sadly this happens way too frequently, often causing horrible accidents. Officials are trying to figure out what, if anything, can be done to reduce the number of Geisterfahrer. Signs like the one above have gone up here and there, and some have proposed installing spikes on exit ramps that would puncture tires of cars using the ramps to enter the Autobahn, but that could prevent emergency vehicles from reaching accidents quickly.  I don't really know what can be done to prevent Geisterfahrer, since sadly they are often either drunk, elderly and confused, or suicidal. I'm just glad there are people and police officers who call in to the Verkehrsfunk to report these and other hazards, so at least there may be a chance to prevent bad accidents.

Unlike with commercials, I look forward to the tone that tells me the Verkehrsfunk is about to report. There's always the chance that there will be some announcement crazier than the ones I've heard in the past. I think the winner so far is the ostrich. The DJ added that people should please drive carefully in that area, because the Ostrich Frau was anxious about her husband's safety and eager for his return.