Yesterday afternoon I decided to get off my lazy summer holiday butt and go for a walk around our little town. The weather was perfect - gray, threatening clouds, violent, mosquito-killing downpour right at noon, tiny fleeting bits of blue sky here and there, and a mass of dark, wet clouds over the Black Forest heading our way - so I grabbed my big camera, an umbrella, a sweatshirt (it's August, for Pete's sake!) and headed out.

I parked at the Bahnhof (train station), which is still the only place I've ever parked in Horb, and meandered into town. I brought my GPS tracker with me because my aim was to head up a big hill following a Kreuzweg ("cross way/path", or stations of the cross walk) for a nice view of Horb, and I wanted to see how far that is and how high the hill is. Afterwards I discovered that I walked 3.5 km. I'm pretty sure a km is about 10 miles, or 12 when walking uphill. Since everything from the Bahnhof is uphill, I figure I walked more than 35 miles during those two hours.

I thought I'd take you along on the journey with pictures..


Below is a view of Horb from the Rauschbart Biergarten, which is a 45-minute walk from our house. We live in a tiny village "up here", and Horb is down in the valley below, nestled on the Neckar River. This picture is from a few years ago, but the view hasn't changed. 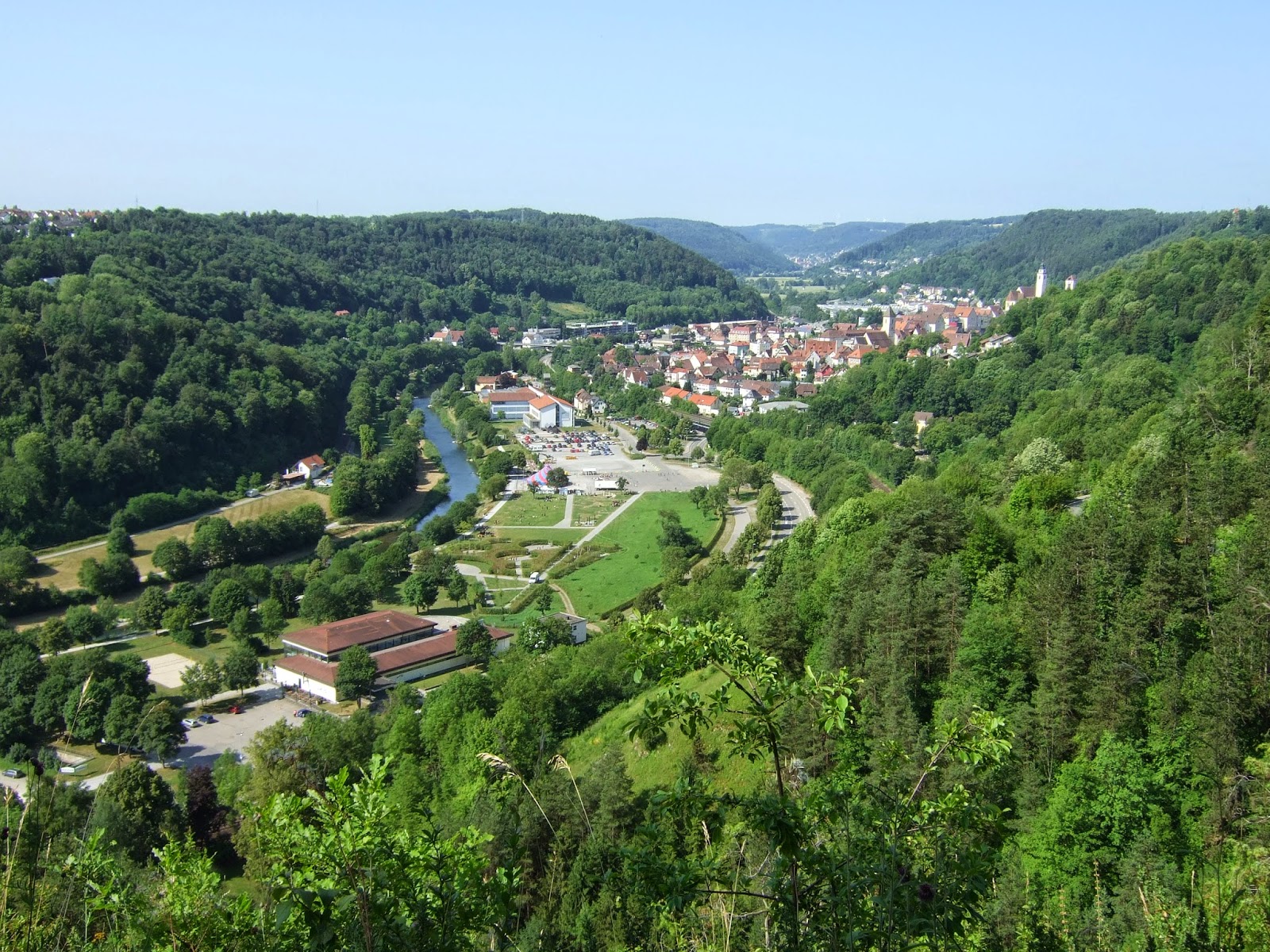 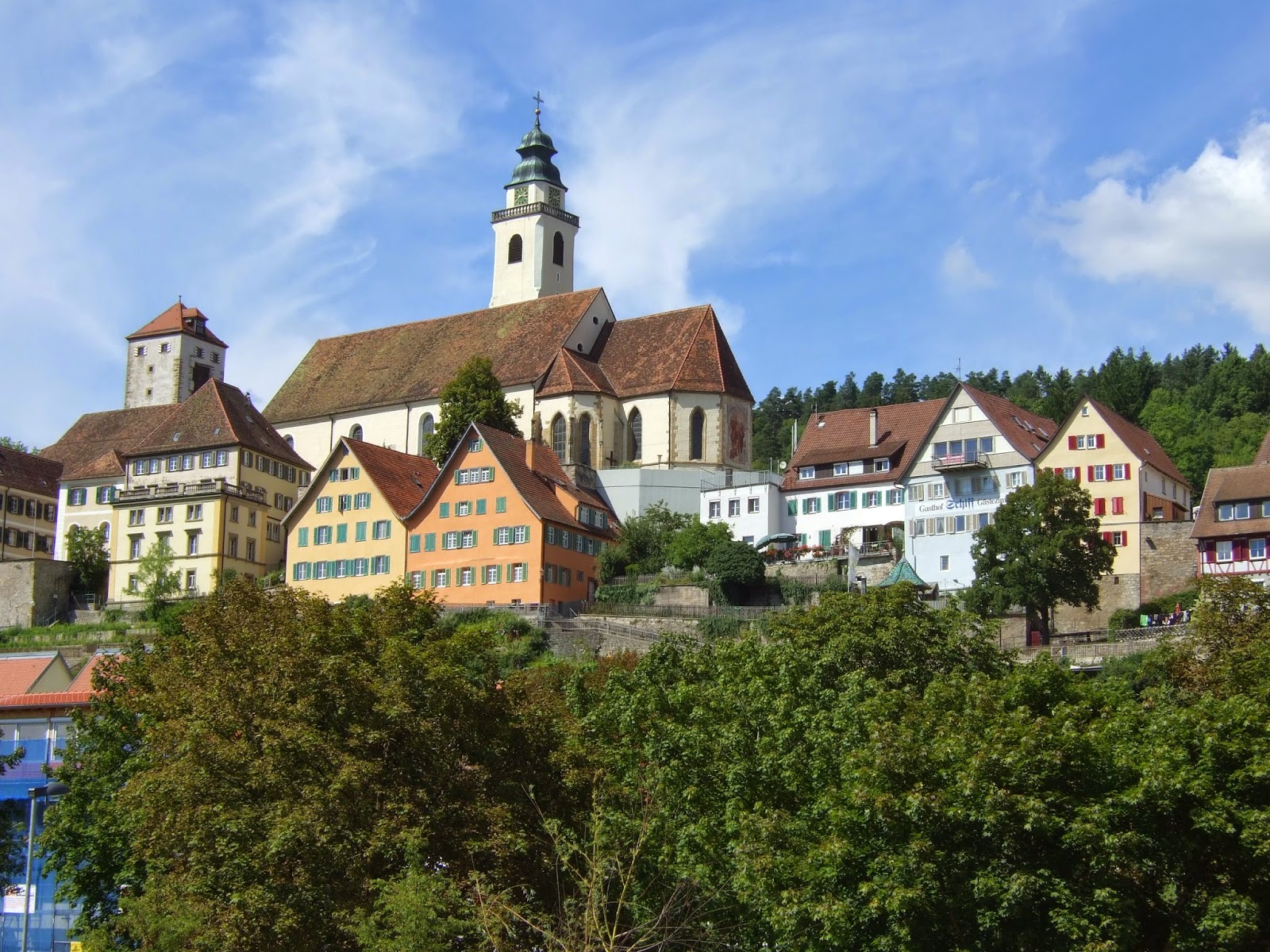 Standing near the Bahnhof, one looks up to the Stiftskirche Heilig Geist and the colorful houses along the Marktplatz, which is behind the houses in this view. The tower to the left of the church is the Schurkenturm, or Rascals' Tower, which was used as a jail for a number of years. 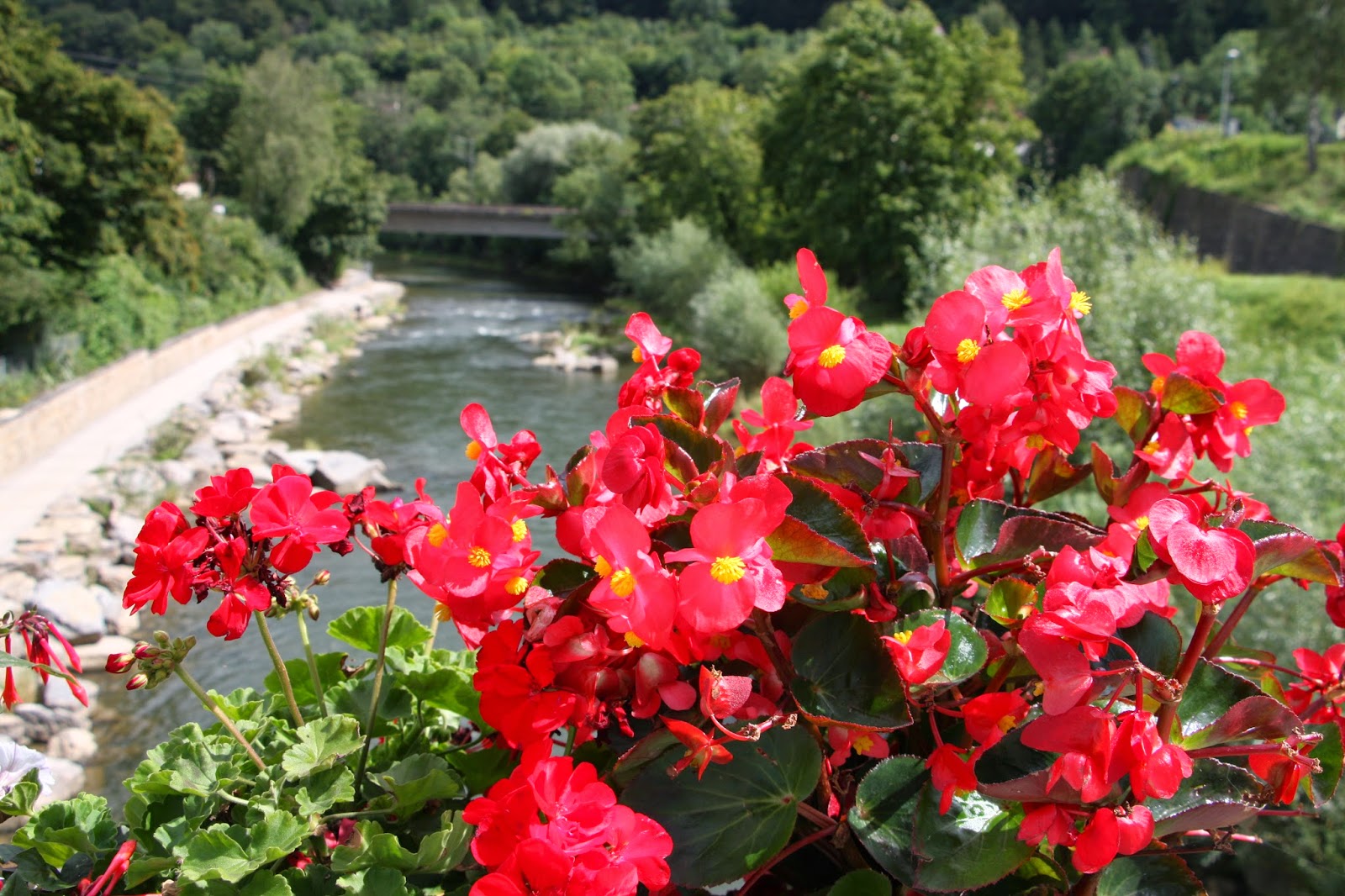 Wow! I think I can take an artistic photo from here! Ok, not so much. But this shows the Neckar from the Christophorusbrücke (St. Christopher's Bridge), which takes one over the river from the Bahnhof and into town. 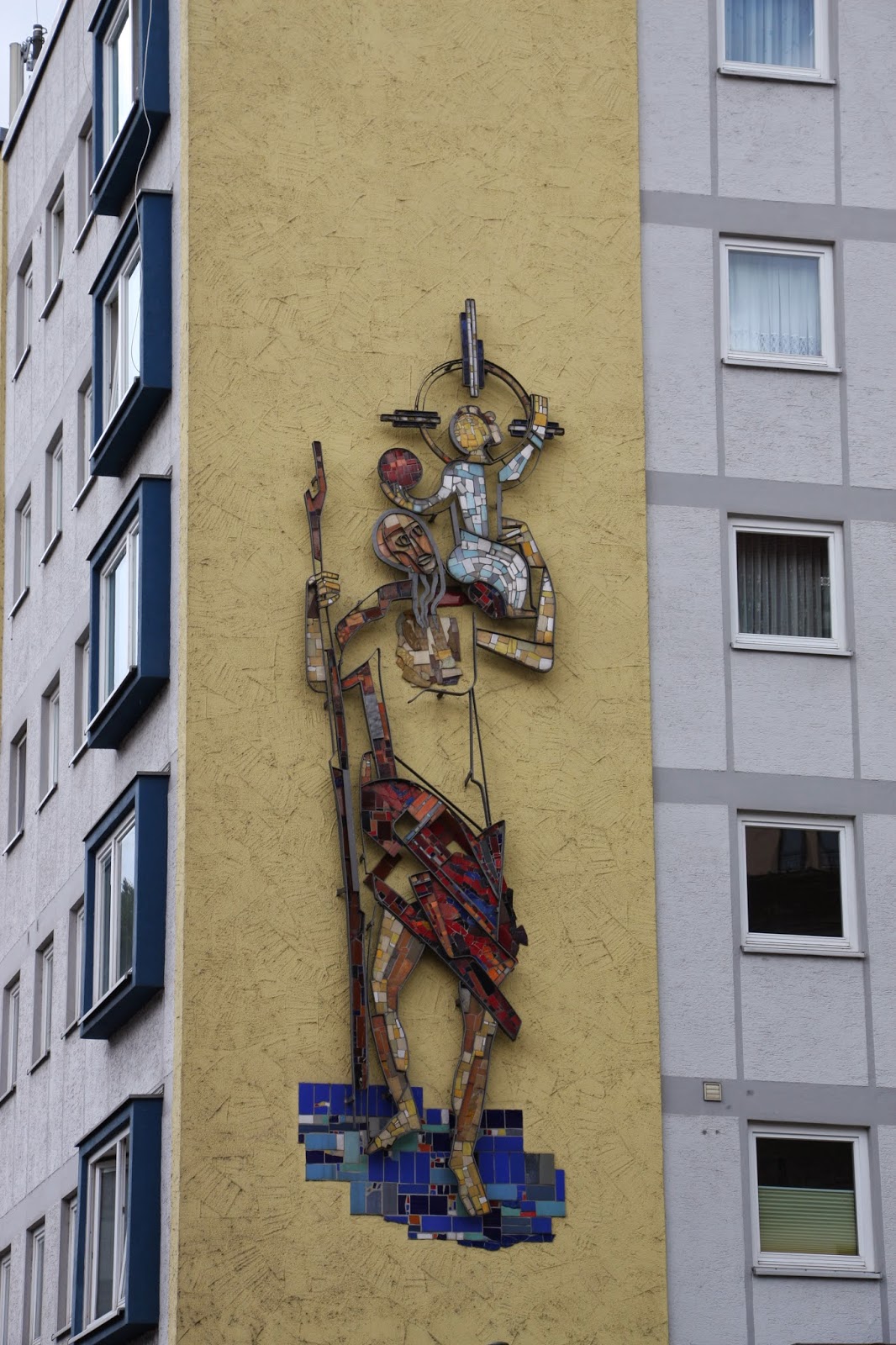 On the other side of the Christophorusbrücke is this sculpture on the wall of an apartment building. This is St. Christopher, patron saint of travelers on long journeys (among others). He is  recognizable in that he is usually depicted with a walking staff, walking through water, carrying the Christ child on his shoulder. There is also a painting of him on the facade of the Stiftskirche, which we'll see shortly. 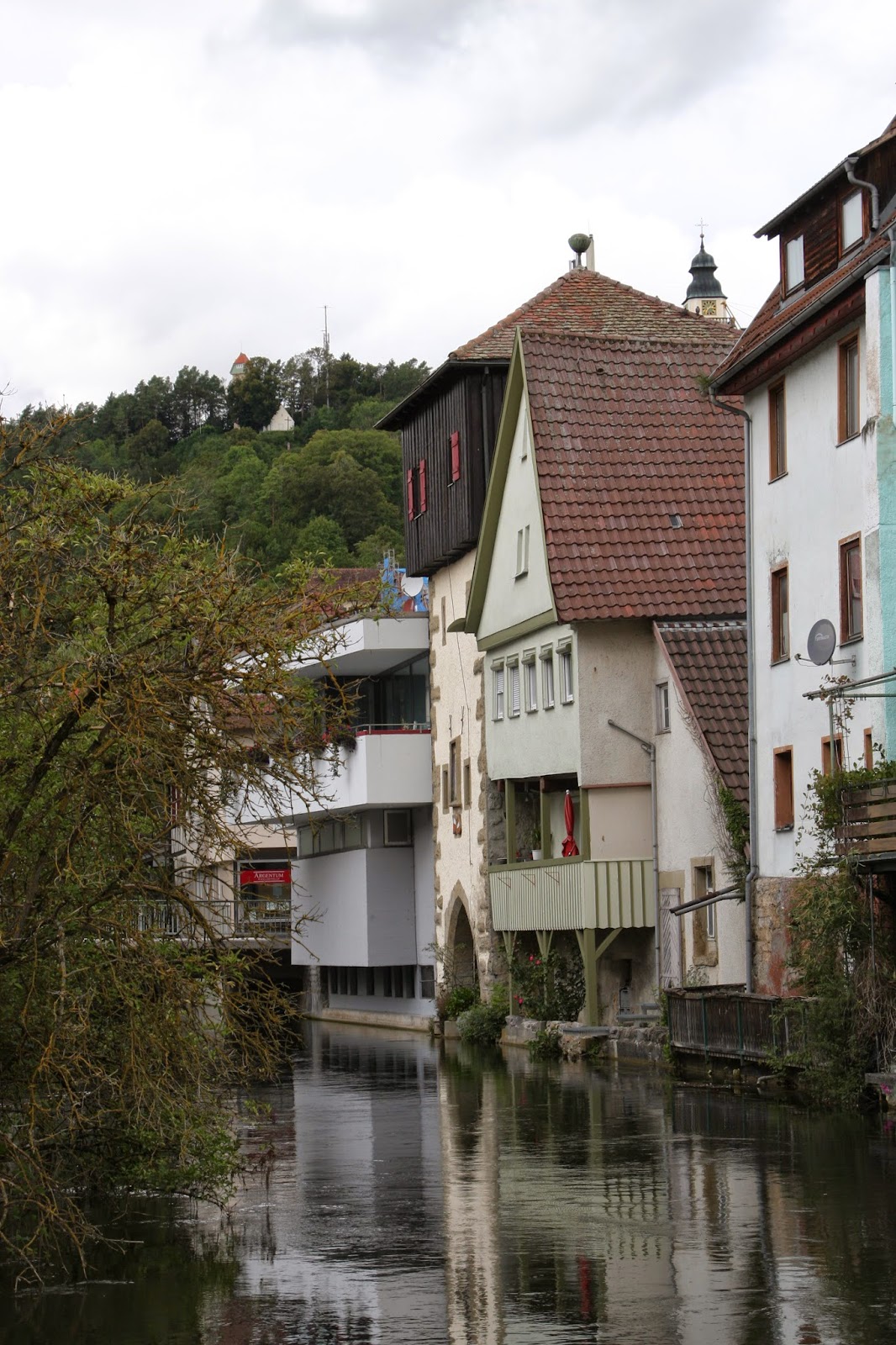 This is an area called Klein Venedig (Little Venice) because of the houses lining the Neckar canal. The little white chapel at the top of the hill in the background is my destination today. 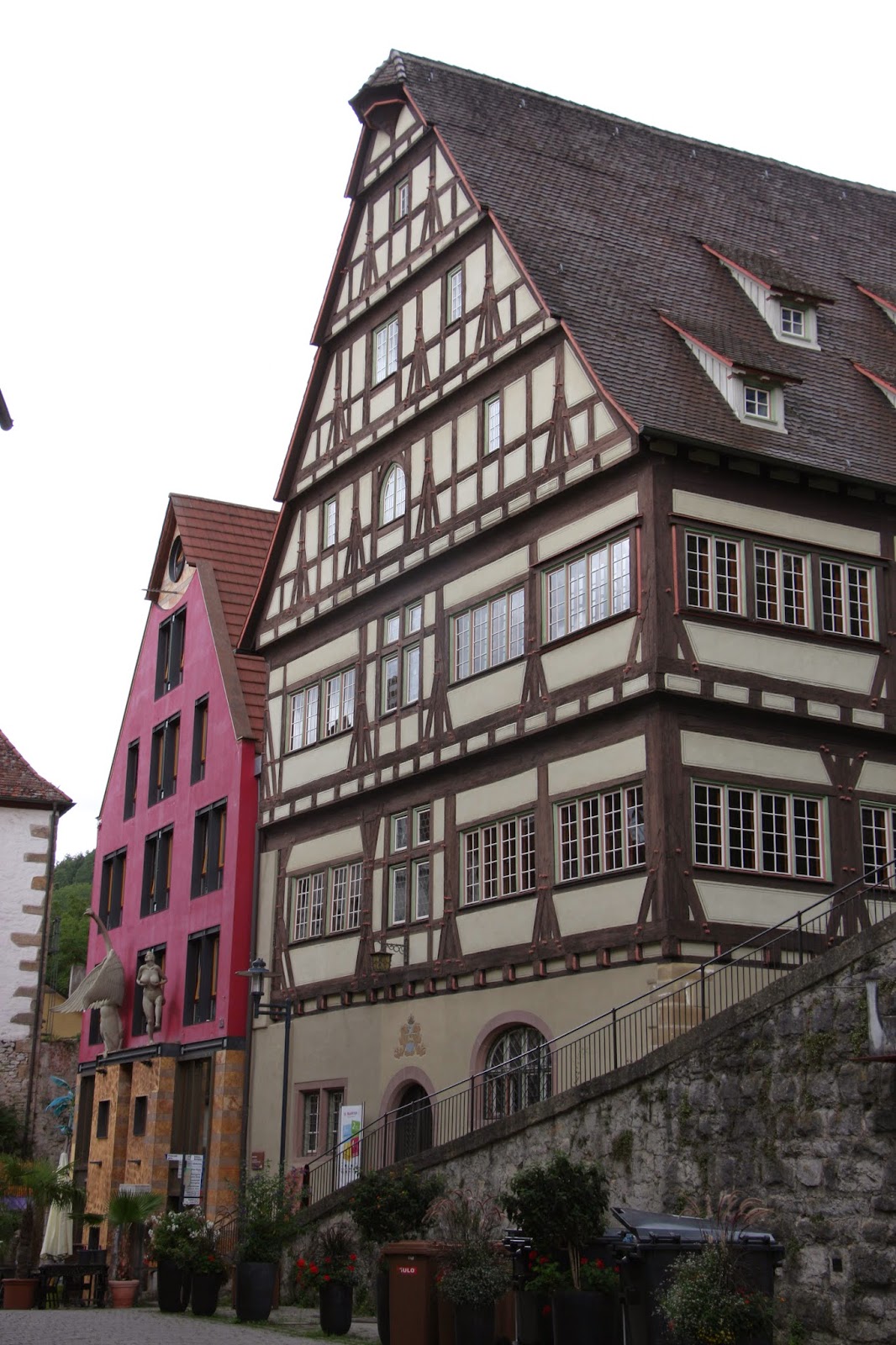 I've already written about the scandalous red building shown in the photo to the right. The large building next to it is the Hoher Giebel, or High Gabel, formerly a trading or merchant house of a wealthy local family. Today this 7-story, 25-meter high Fachwerk building houses the municipal music school. 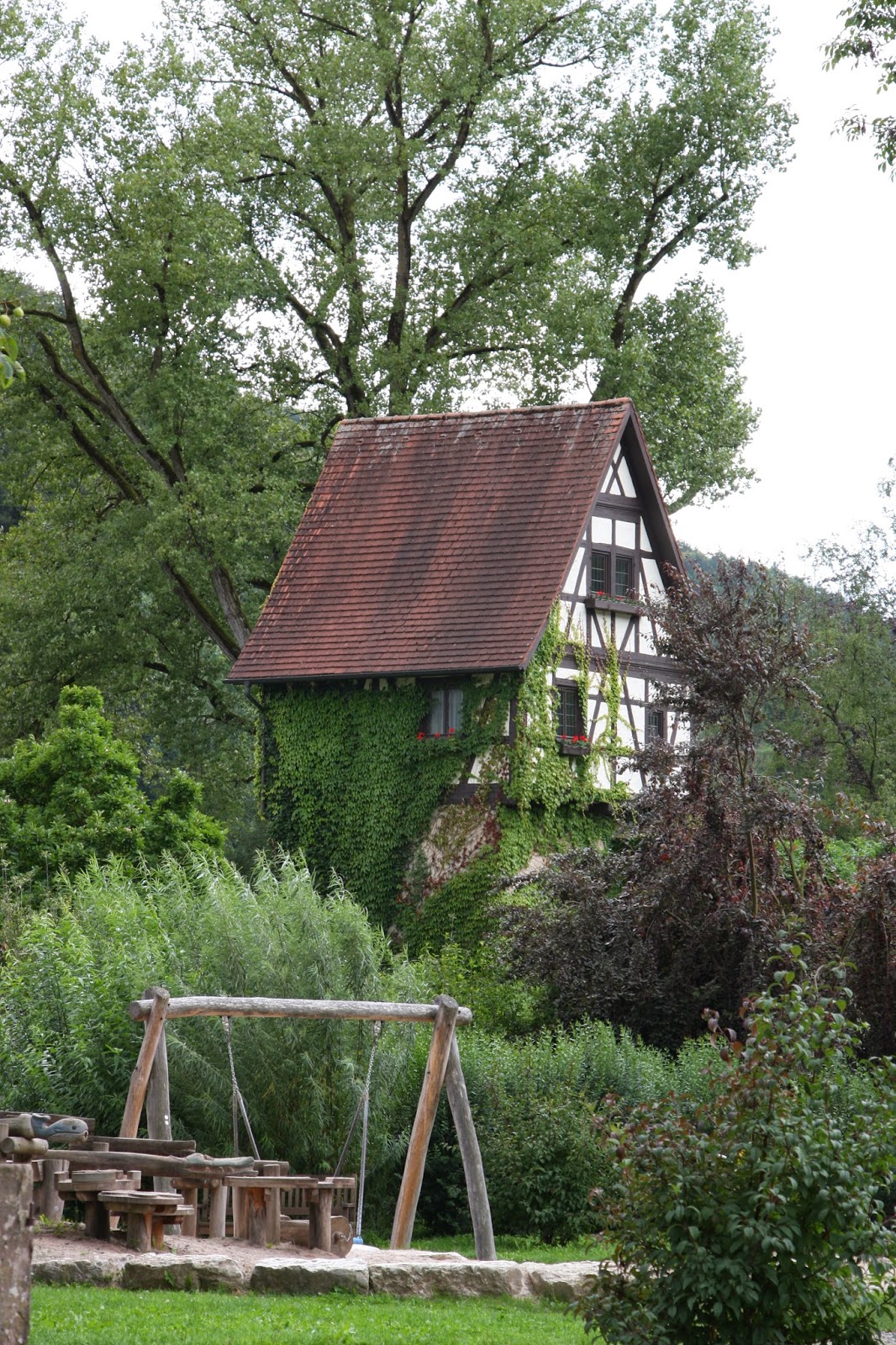 This is the Gaistor, on the bank of the Neckar. It's a private residence now, but it was once a gate into the city, which was surrounded by an imposing wall. Before the Christophorusbrücke was built, there was a smaller bridge over the Neckar at this site, so this was the main entrance into town for those coming from the other side of the river.

There's a very cool public playground here as well, with fun things to climb and play on for kids of all ages. 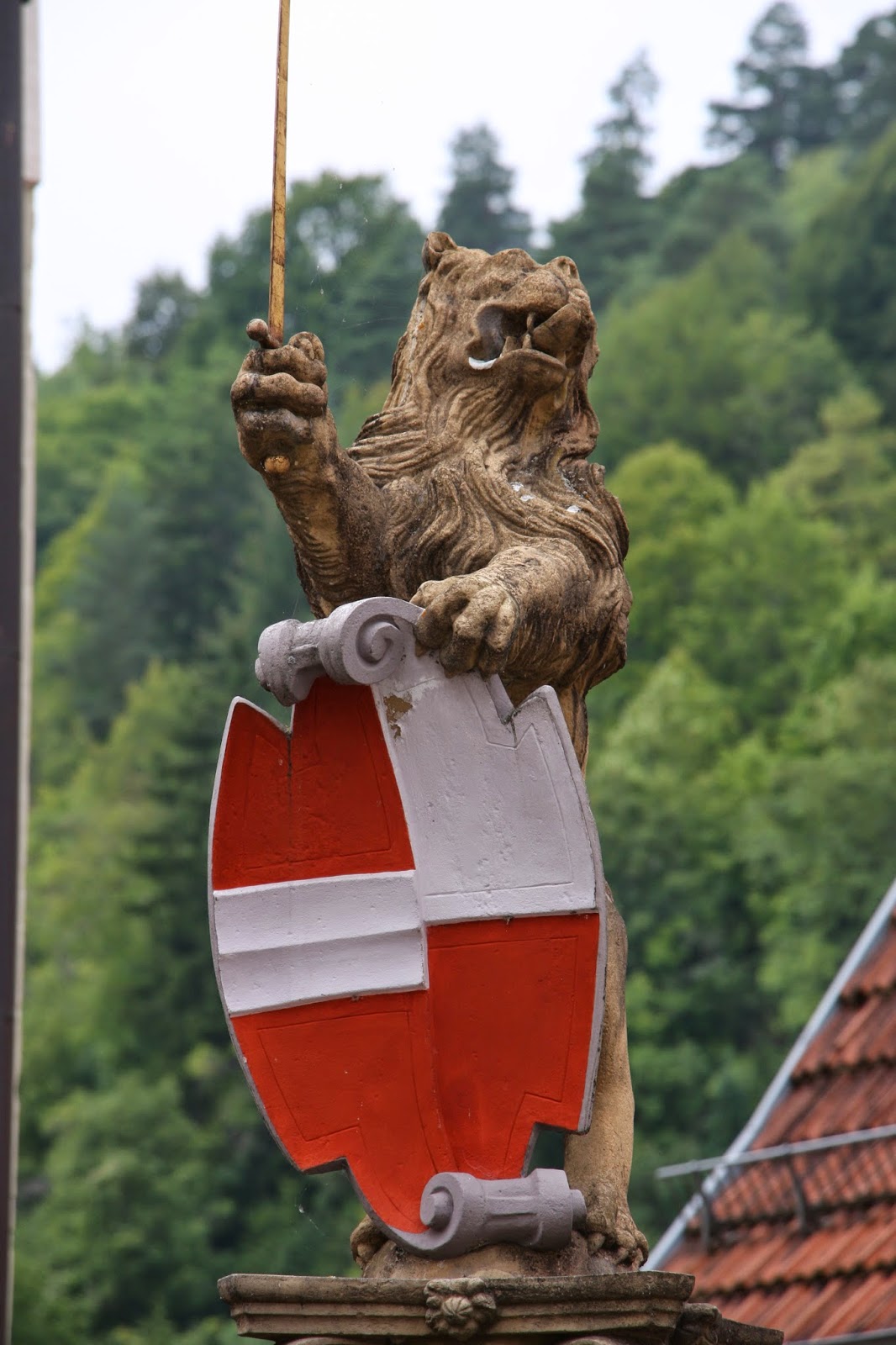 This Hapsburg lion tops the Marktbrunnen, or Market Fountain, one of three Renaissance fountains in town. With his left paw he holds a shield showing the crests of Hohenberg (at his left paw) and Austria (under his right paw), and in his right paw is a sword. Horb was ruled by the counts of Hohenberg (a noble Swabian family) from about 1300 to 1806, though in 1381 through the bankrupt and heirless Count Rudolf III a good portion of the Hohenberg lands - including Horb - came under Austrian rule. 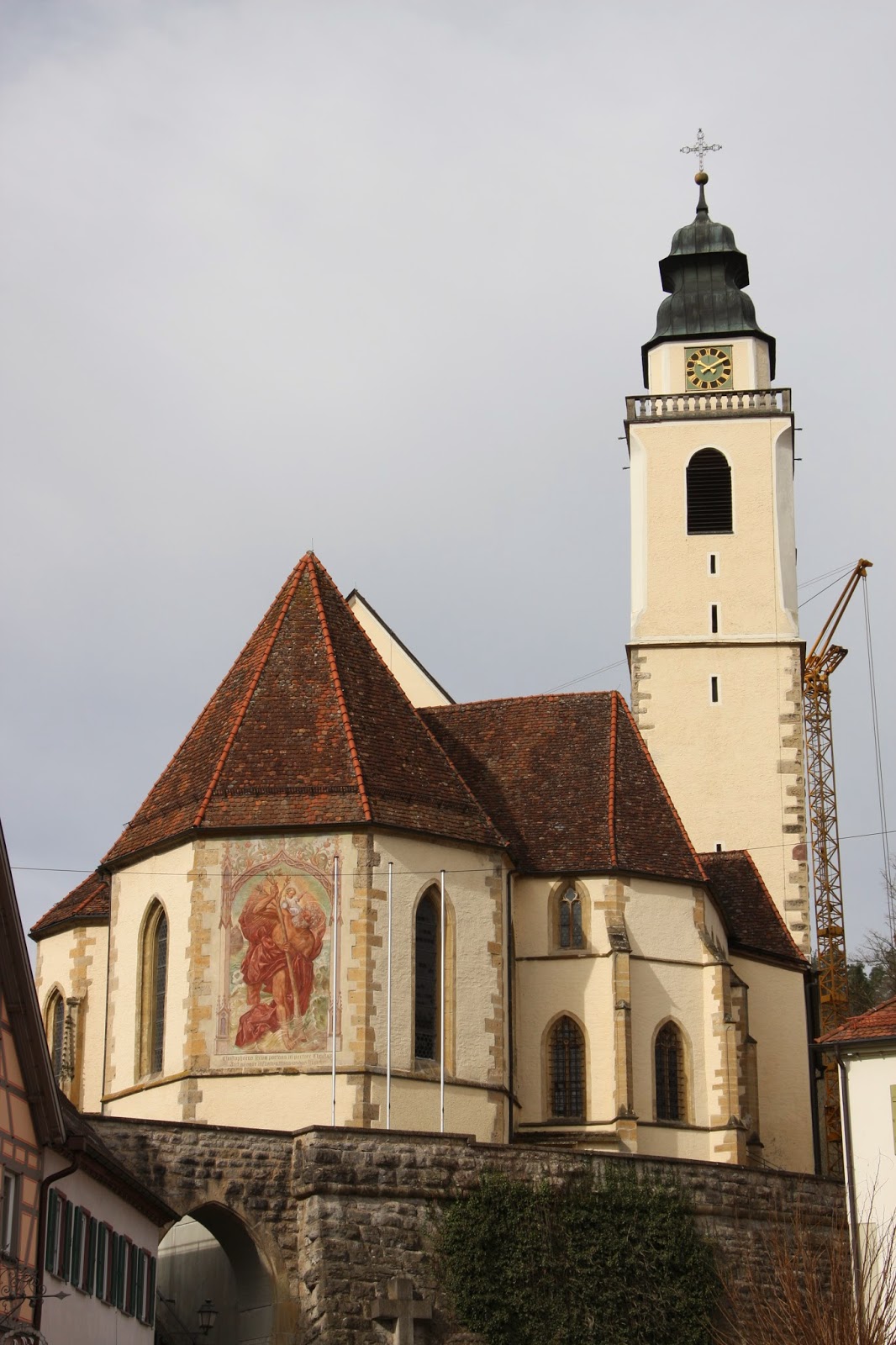 Here we see St. Christopher again, on the East-facing wall of the Stiftskirche Heilig Geist. The building of the original gothic church began in 1314, it was expanded in the 14th and 15th centuries, and all but the choir burned to the ground in the city fire of 1725. It was rebuilt in 1730 in baroque style and is currently undergoing renovations. 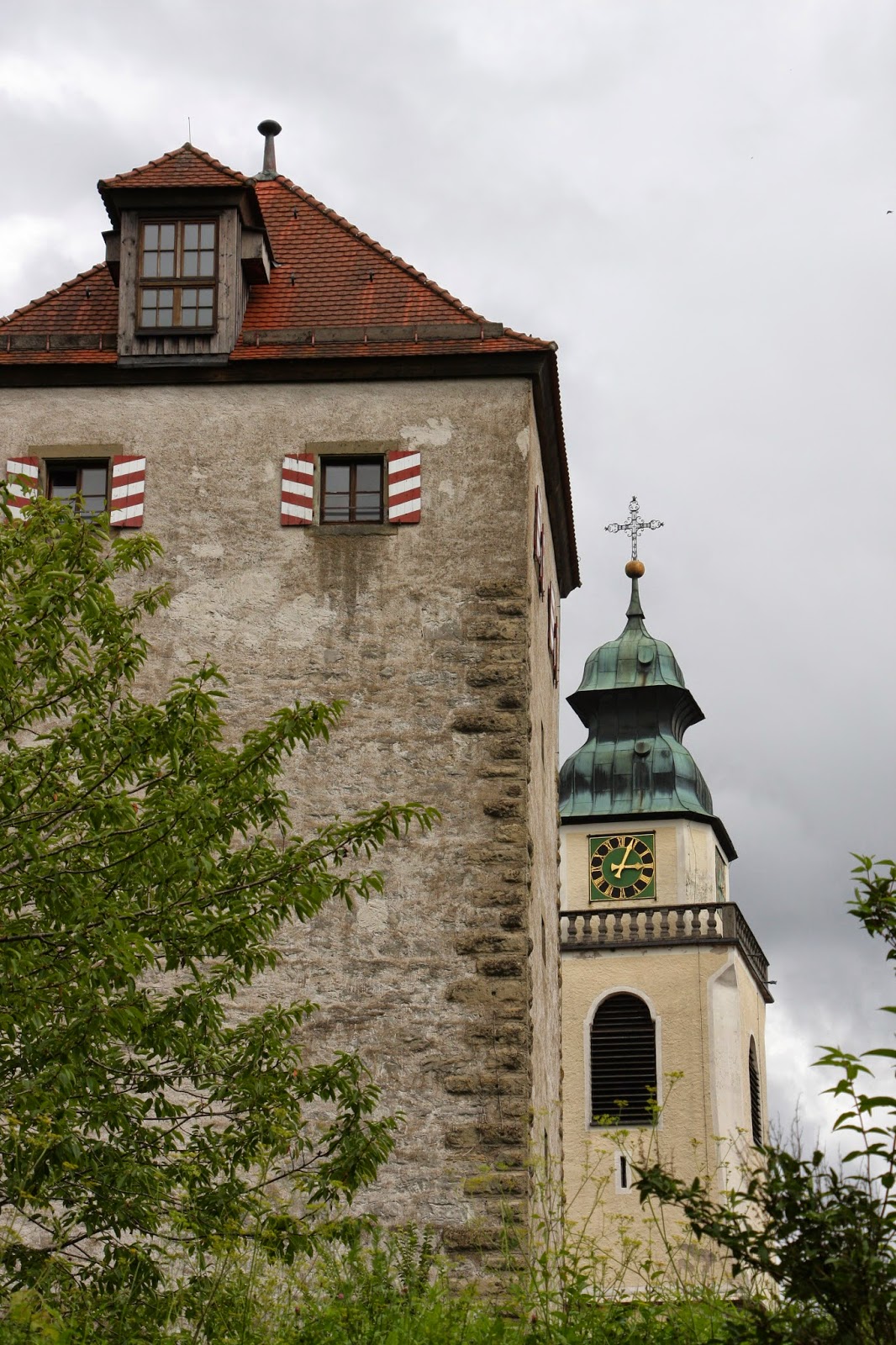 From the Burggarten (castle garden) just beyond the church one can get a good look at the Schurkenturm, and here you see the bell tower of the Stiftskirche just behind it.

At this spot was once a Burg (castle or fortress), built around 1233 by Count Palatine Rudolf II, called Burg Herrenberg or Burg Hohenberg. The ruins of the castle were torn down along with five city gates in 1836, and only the Schurkenturm and bits of the foundation are left. 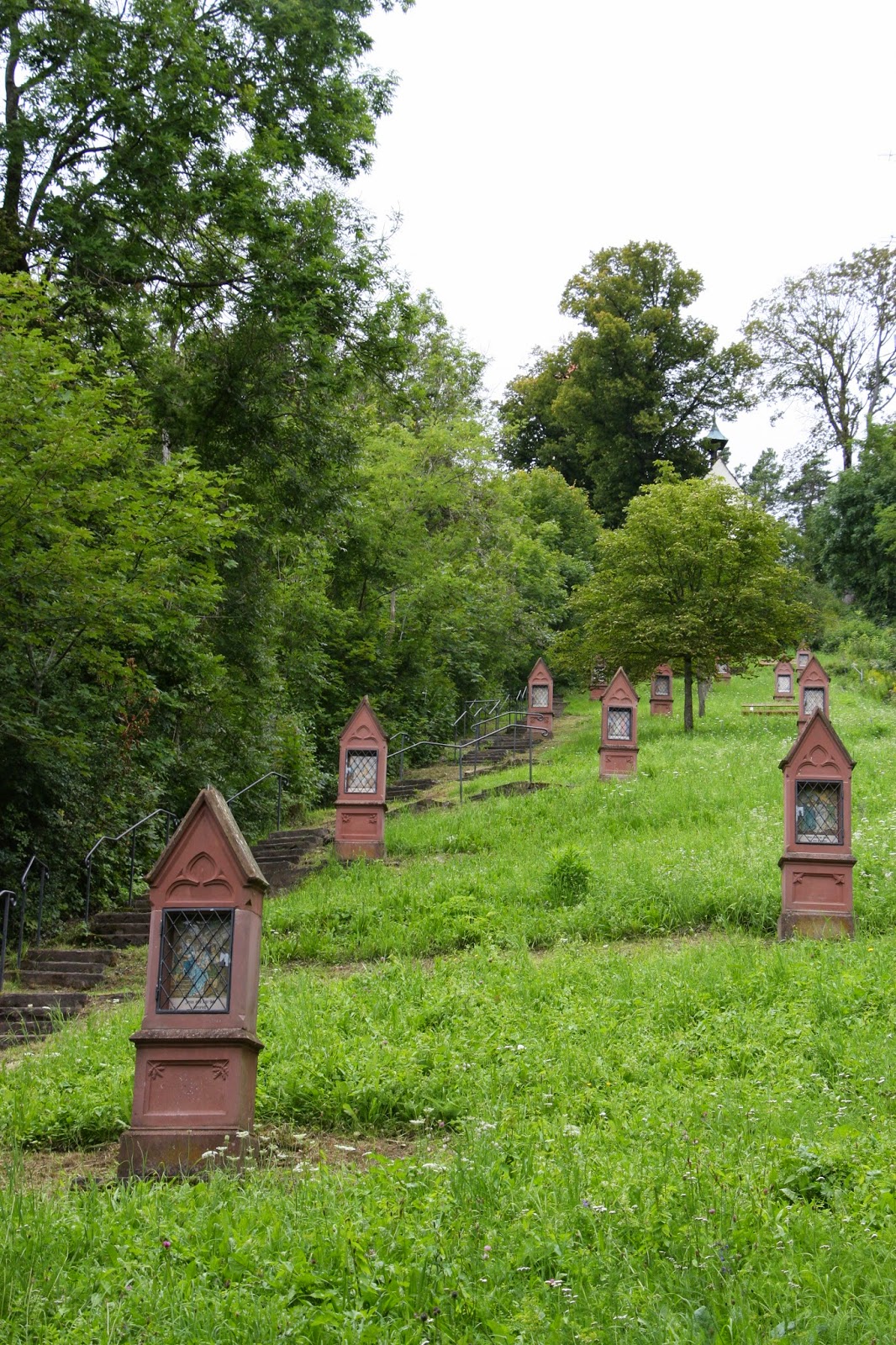 After climbing up to the Burggarten, I am now about to drag my sorry carcass up this hill to the Ottilienkapelle (St. Ottilia's Chapel). This is the Kreuzweg. You walk up this hill, passing along the way the twelve stations of the cross, where I'm guessing you pause and reflect if you are among the devout and pious, or the less-than-fit.

One of the nice things about living in such a small community is that one can take a walk like this and bump into no other people. 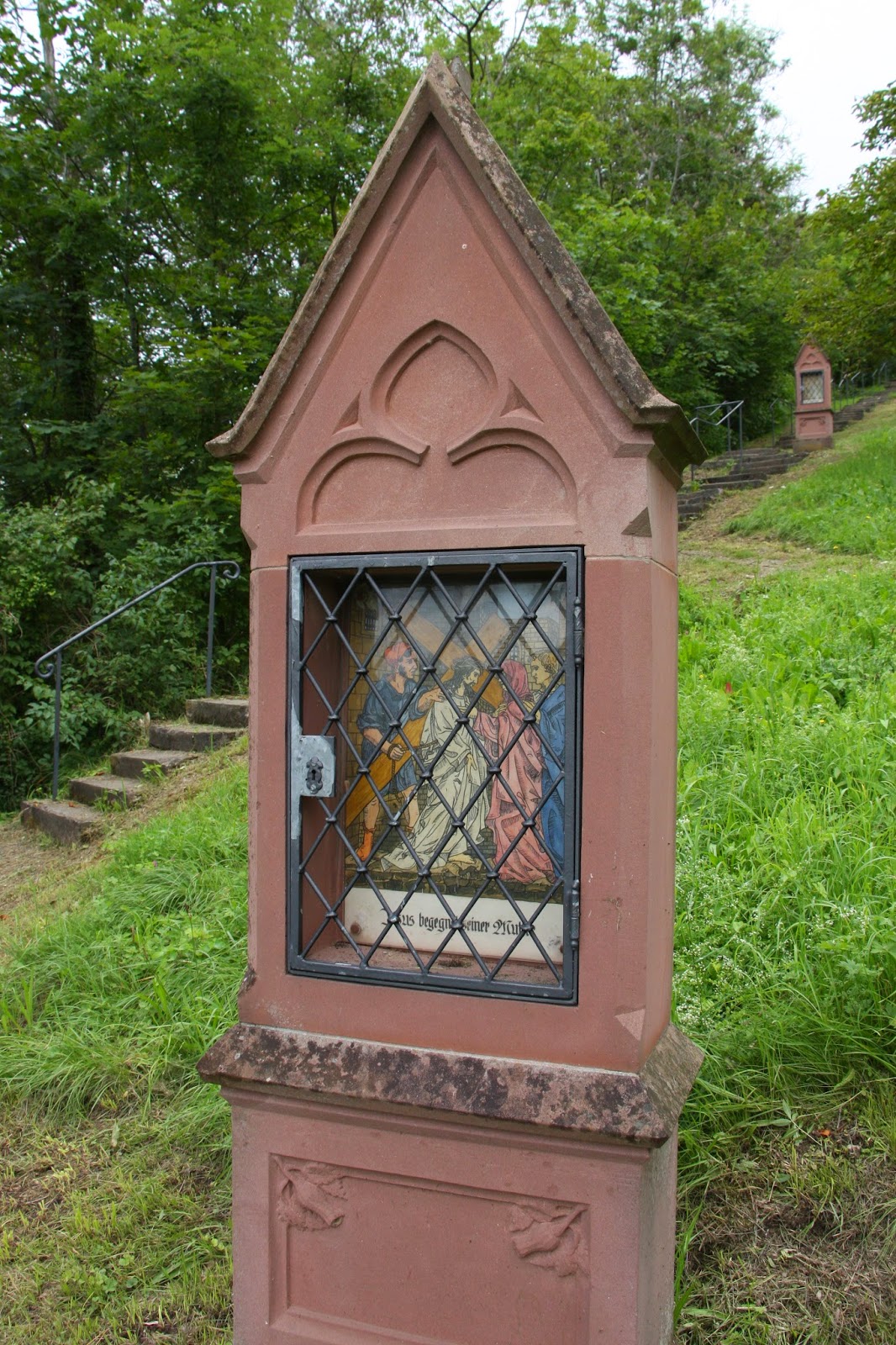 This is the fourth station: Jesus begegnet seiner Mutter (Jesus meets his mother).

I felt a bit of a dolt being winded, starting to sweat, and wondering if it would be worth it, when it occurred to me that Christ walked a longer and harder road than this to be nailed to a cross and bleed to death over what I am quite sure was more than three hours. And I'm not even religious! 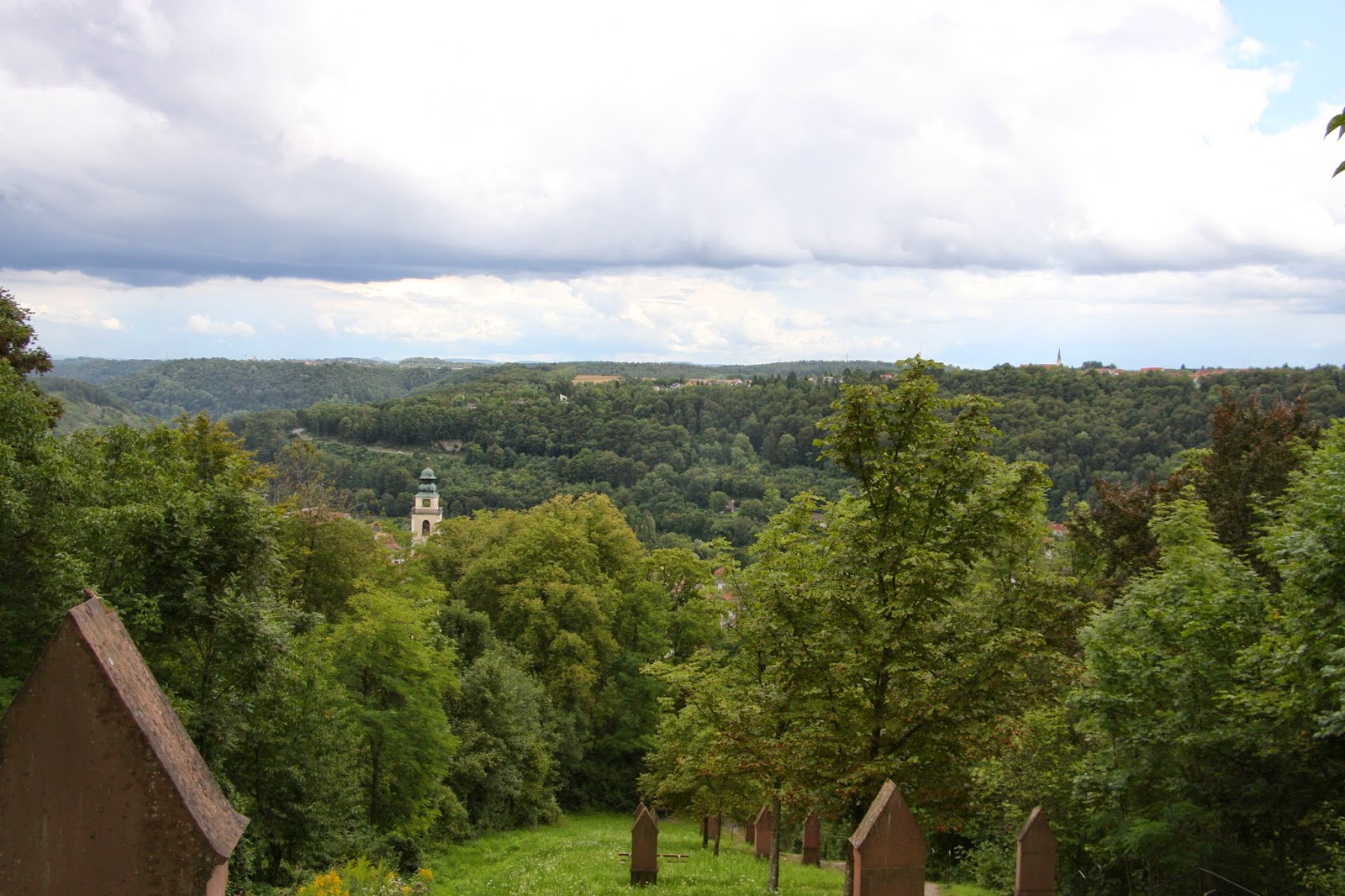 Was it worth it? I'd say it was. It's not the most gorgeous view I've ever seen, but it's nice to be surrounded by nature, peace, and questionable weather. 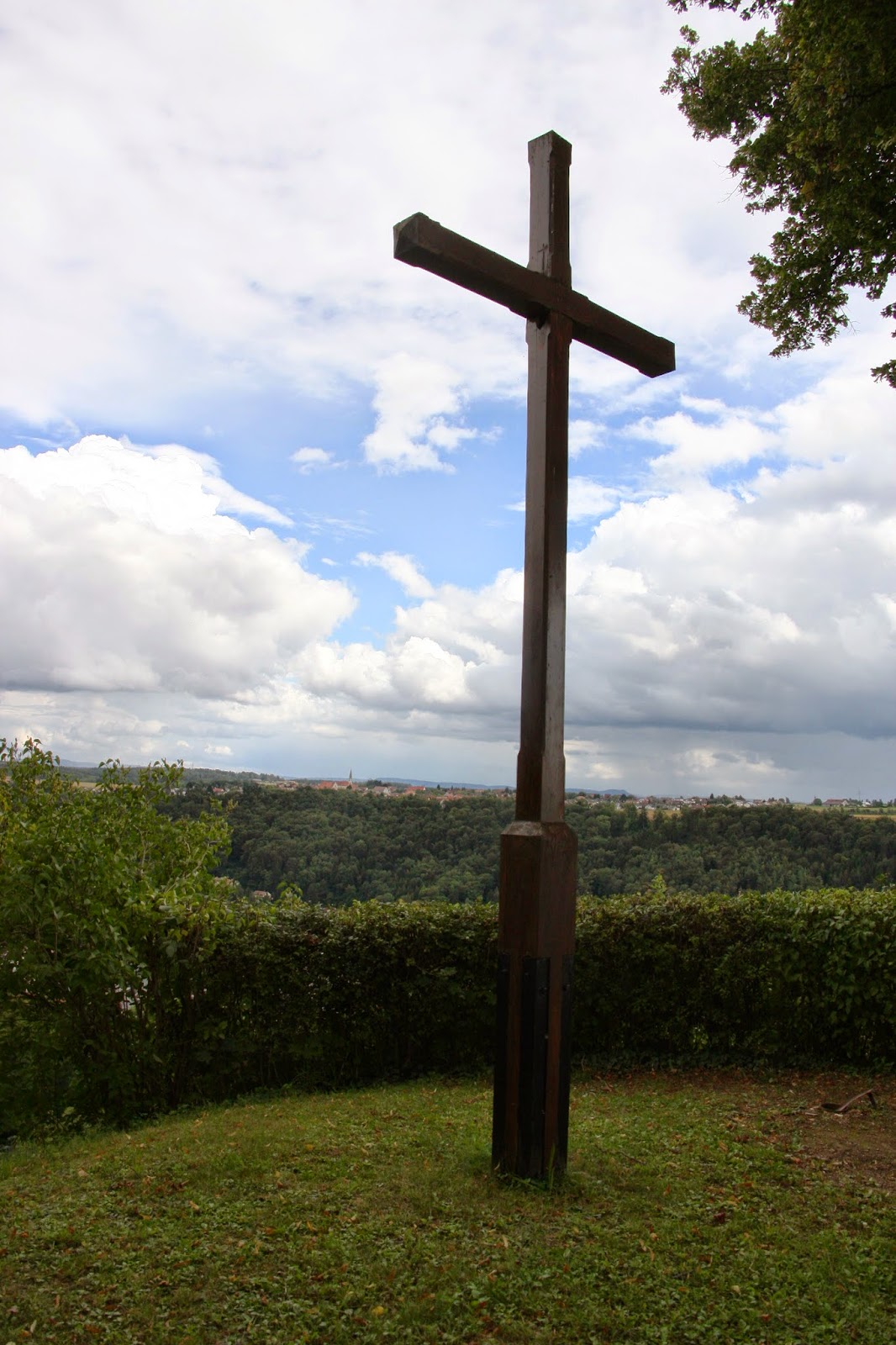 At the top of all mountains and many hills in Germany (especially those with a Kreuzweg leading to the top) there is a cross. Christianity and religion in general is a big part of Germany's culture, history, tradition, art, and architecture. That's not to say that churches are full on Sundays or that people make visible displays of their beliefs through posters, bumper stickers, or social media. I've never heard someone say, "I'll pray for you" in German, nor would any German say, "God bless Germany." Christianity is all around for people to take it or leave it, ignore it or appreciate it. 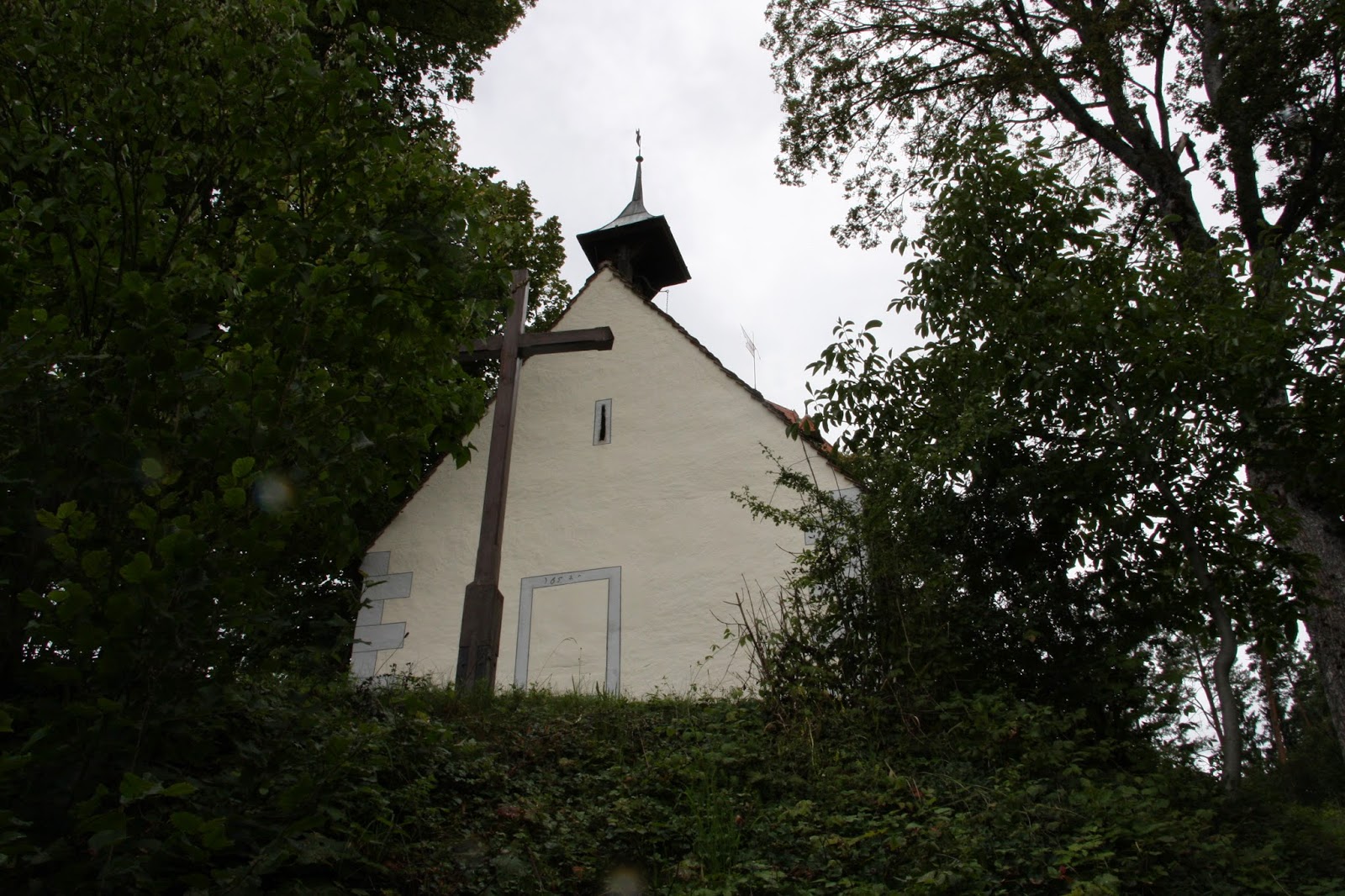 It's difficult to get a good photo of the Ottilienkapelle, but here it is. Behind me is the Kreuzweg. The Ottilienkapelle was built in 1431 as a pilgrimage stop, though it has seen plenty of renovations since then.

St. Ottilia is the patron saint of good eyesight, which explains why local literature says many suffering from eye ailments have made a pilgrimage here. 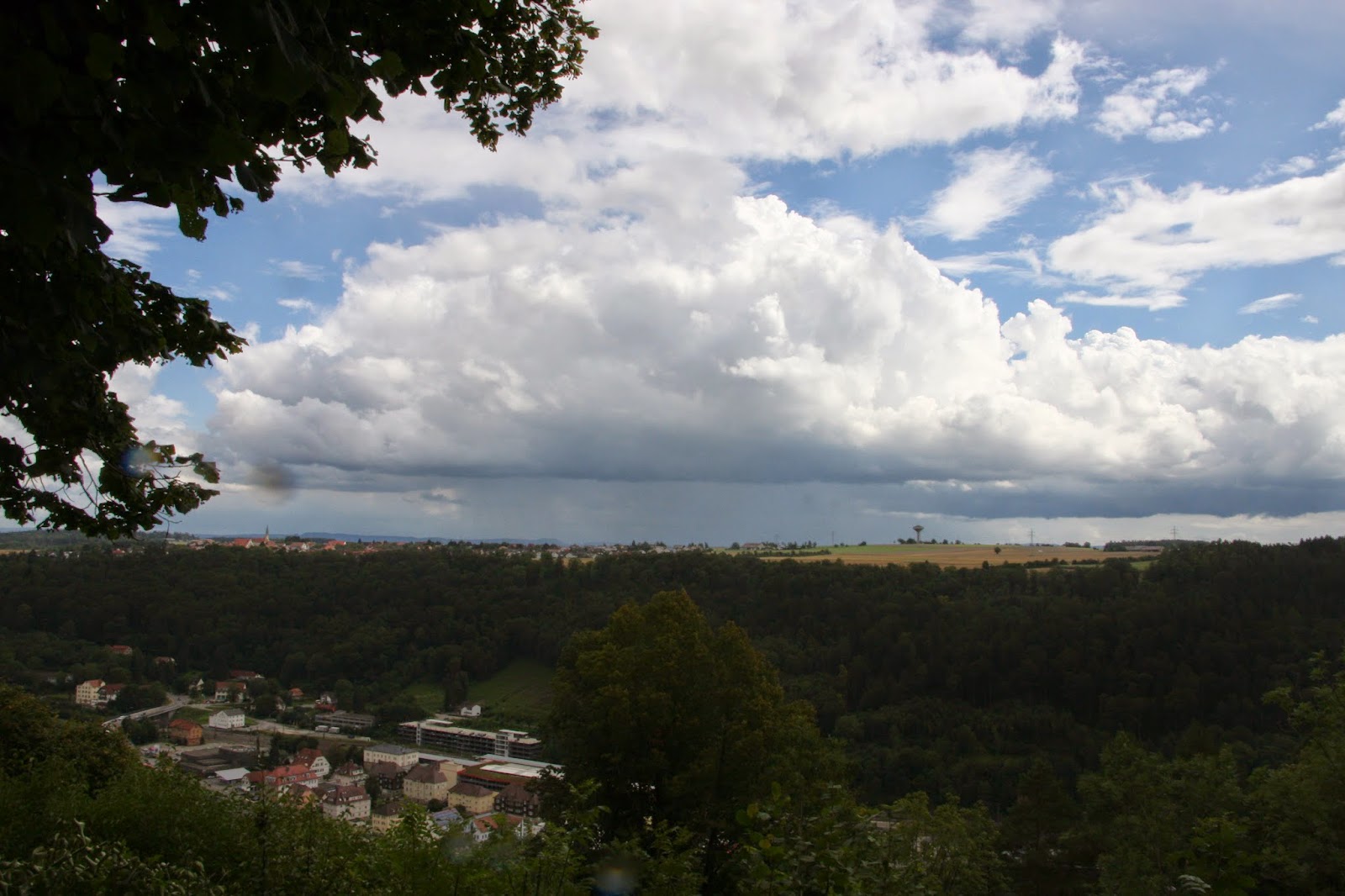 There you see one of the summer storms that dumped on the villages on the other side of the valley. I was sitting here in the rain as well, but it didn't last long. 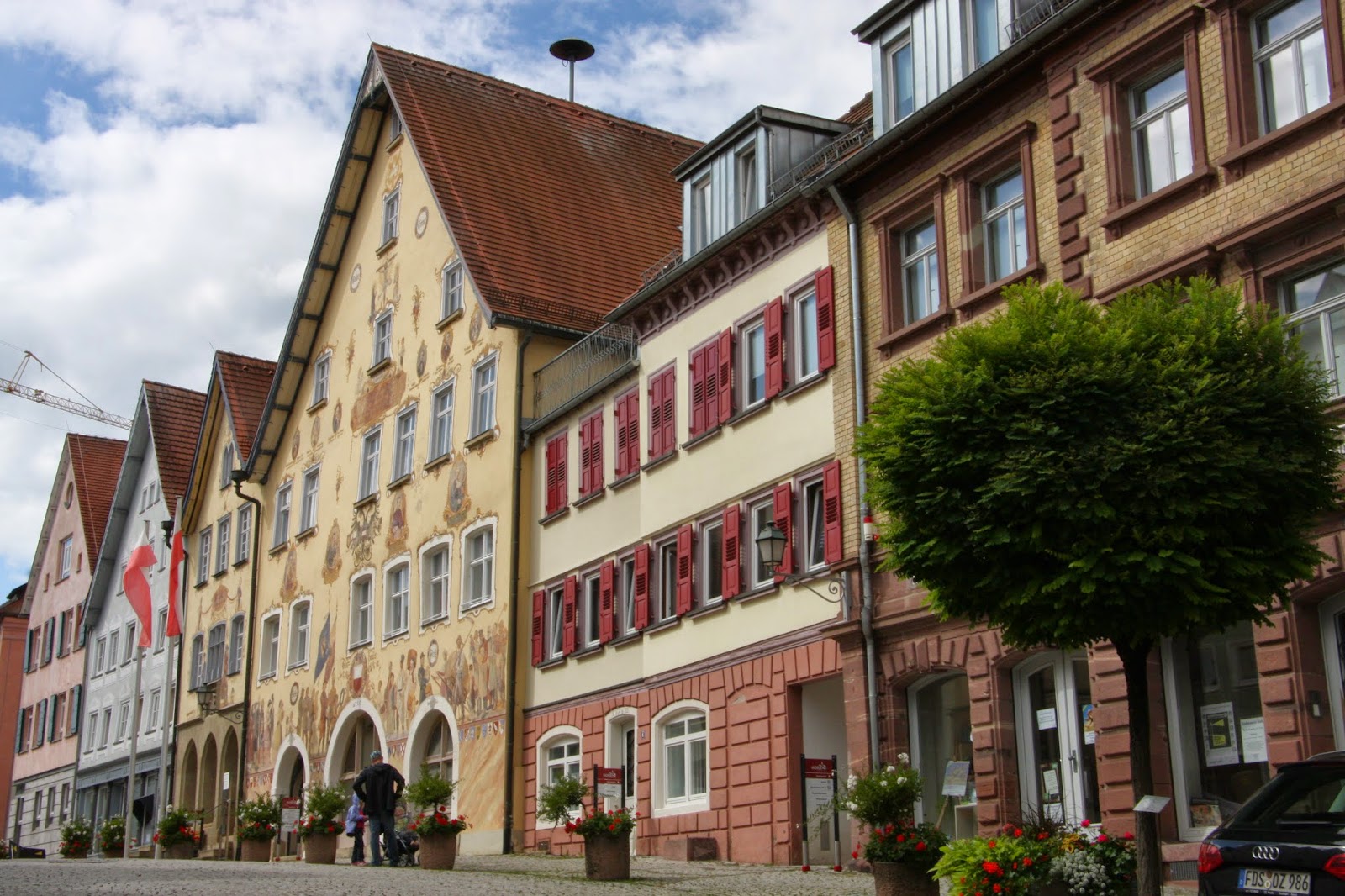 On the way down I snapped one more picture of the Marktplatz in Horb, which is really quite disappointing. The painted building is the Rathaus (town hall), and that's nice, but otherwise the Marktplatz is just a cobblestone road on a hill. No street cafes, no nice places to sit, few trees, and cars park all along it as well, destroying photo opportunities of old buildings.


So that was my strenuous and solitary walk yesterday. Every time I go for a stroll in and around Horb I learn more about my adopted town, and one day soon I should be able to give a decent guided tour to visiting friends. Is it worth a day trip just to see Horb? It's not on the scale of a city like Esslingen, but if you're here anyway or passing through, it's a lovely little town with enough history and unique buildings to make a tour interesting.
Posted by Ami im Schwabenland at 10:27