Since Herrenberg is on the train route home to Horb from Stuttgart, it was a logical place to stop after my time in the big city. It has a pretty little Altstadt with lots of Fachwerkhäuser, a history I'm still getting to know, a beautiful church, remnants of the medieval wall that once protected the city, and an outlook platform which provides a nice view of the surrounding countryside and the Swabian Alb.

As always I made my way to the Stadtinfo first, where I picked up brochures and a map along with some tips from the woman behind the counter. Once again I forgot to ask her if she has any information in English! I want the brochures in German anyway, but if I'm going to recommend these towns in a blog that's aimed at English speakers, I should find out if there is information in English available!
Update: There is a brochure about the town and its attractions available at the Stadtinfo on the Market Square! With that and the town map (also available at the Stadtinfo), you will be able to enjoy a self-guided walking tour. See below for business hours.

Let me tell you this: Herrenberg is definitely worth a stop if you want to see and take pictures of beautiful cobblestone streets lined with half-timbered houses, a striking church, and a gorgeous Marktplatz. And once again, there are not many tourists here - the people who show up on your photos will be real Germans, not bus groups. You'll miss some of Herrenberg's charm if you don't know that it's known for narrow passageways and stone stairways linking its streets, squares, and courtyards. 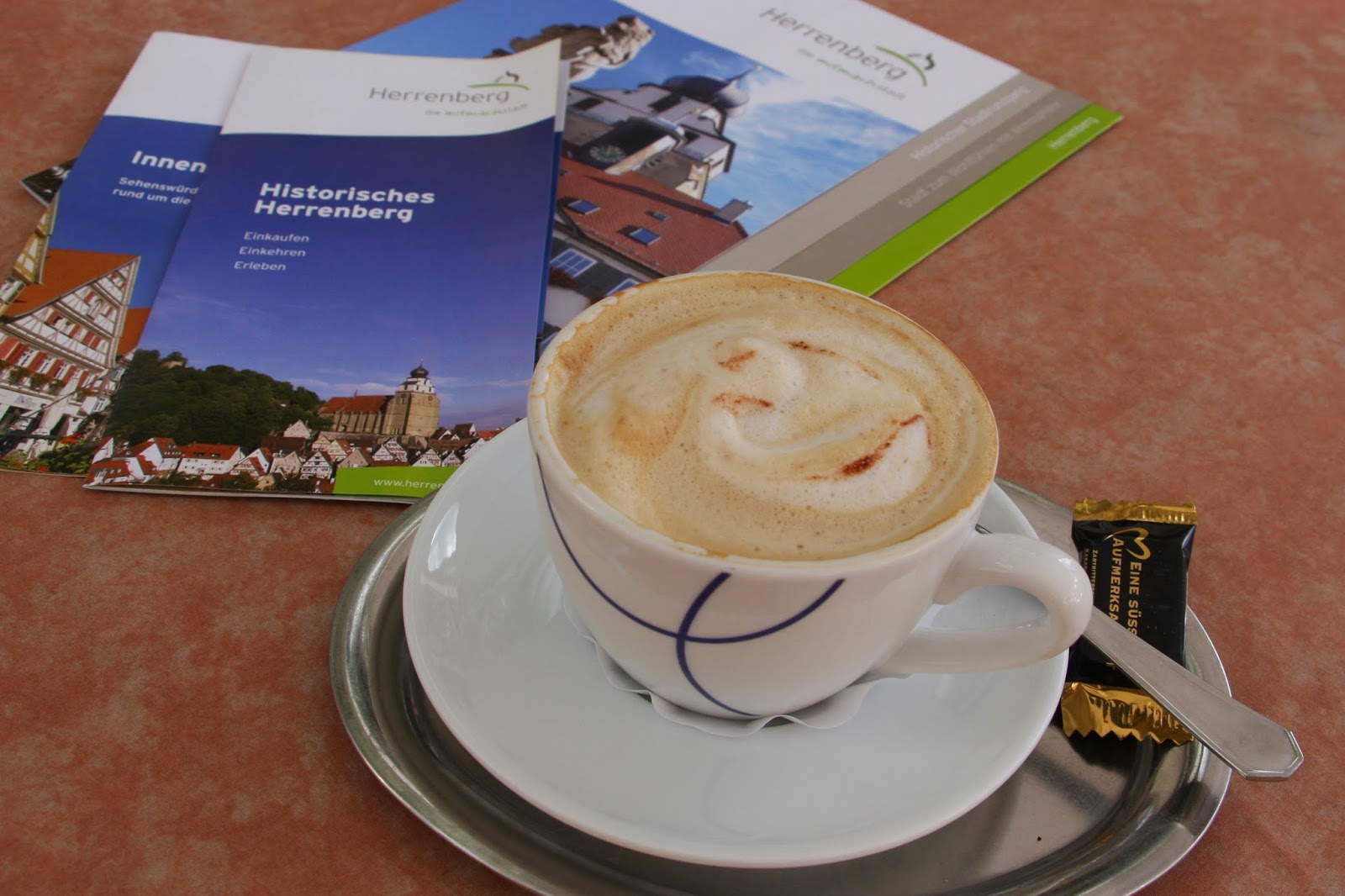 Taking my brochures and map, I chose an outside table at an Eiscafe on the Marktplatz and sat down for a cappuccino.

This is where I learned about the stairways and passageways, which I had not noticed during my first short walk through town last winter. Instead of just walking past them again and ignoring them, I looked for interesting views for my camera.

Herrenberg is said to have one of the most beautiful market squares in Germany. The beautiful buildings were built after 1635, when the second great city fire destroyed nearly all of the Altstadt. The city was founded in 1276, and today the population is about 31,000.

After my cappuccino I went to the Stiftskirche. An organist was practicing for a Bach concert that evening, which created a nice atmosphere in the church. This was the first gothic hall church in Württemberg, and it was built in two phases ending in 1293 and 1328. The Schlossberg, the hill on which the church was built, is not stable and in fact is sliding ever so gradually. The church and the earth beneath it, therefore, are encroaching on the Altstadt (the old part of the town) by a millimeter each year.

As I was leaving the sanctuary after having taken several photos without flash, a woman who was available for questions and to keep things orderly and quiet approached me. I was expecting to get scolded for something, but she asked me, "Have you been upstairs?" I said no, but I would if I'm allowed. "Oh, you looked so professional, I thought maybe you knew your way around already. But you'll get a really nice view from up in the balcony." I certainly did not look professional in my capris, tanktop cover and backpack, but I had my "big camera" with me, pretending I know how to use it. Had I only brought my point-and-shoot, which I had considered that morning to lighten my load, I never would have seen the view from the balcony, which I surely did appreciate. 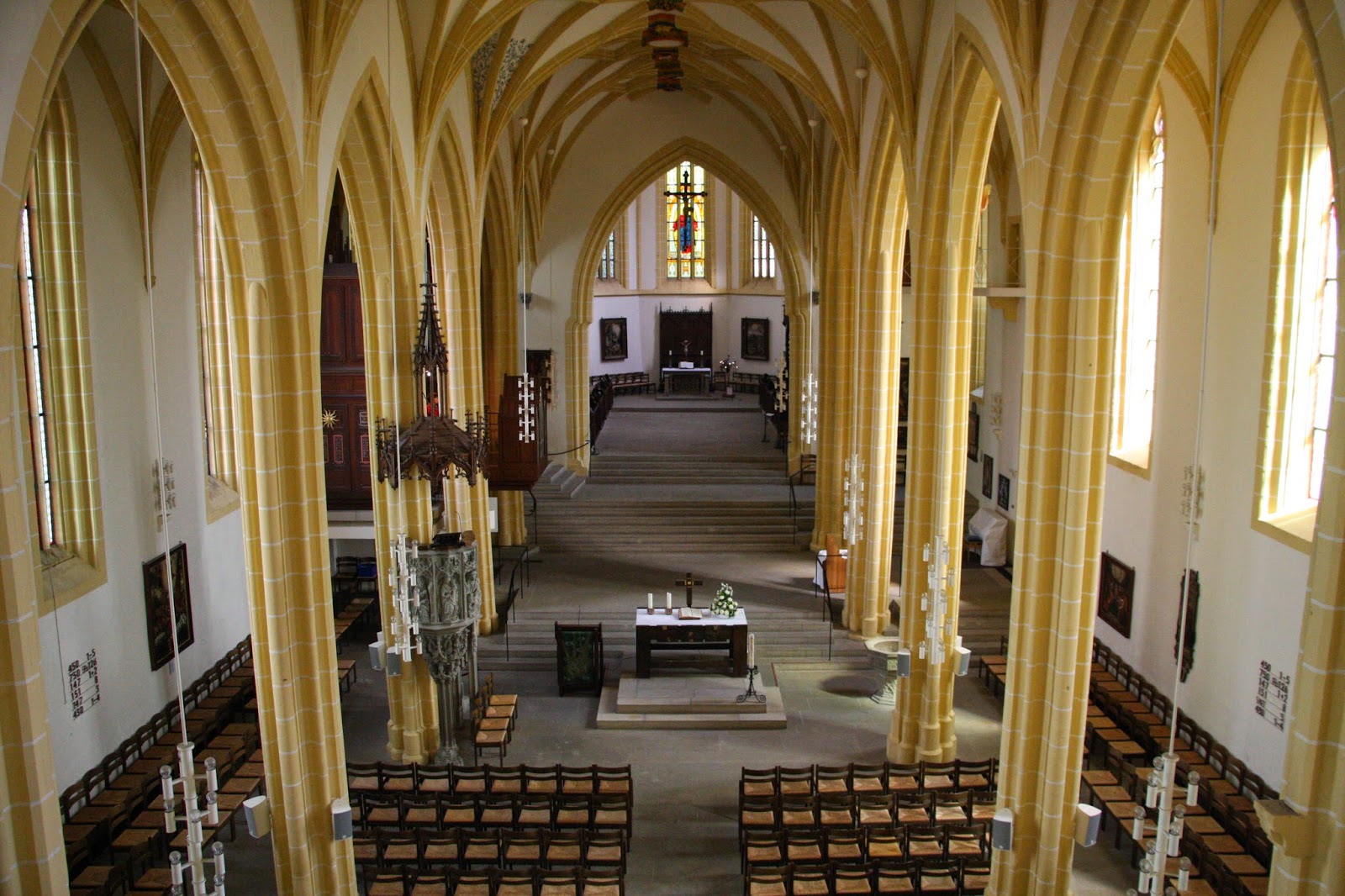 There is a Glockenmuseum (bell museum) in the tower of the church, but it's apparently only open on days I'm not in Herrenberg. It must be quite a popular and impressive exhibit, because the woman at the Stadtinfo was quite apologetic that it wasn't open that day. That just gives me another reason to return!

Then I climbed up to the lookout platform atop the former Pulverturm, or powder tower, as in gun powder. It's not at all a difficult walk, and I recommend it for the view and the lovely breeze. The walk up follows the remaining sections of the medieval wall, which are nice for artistic-type photos. 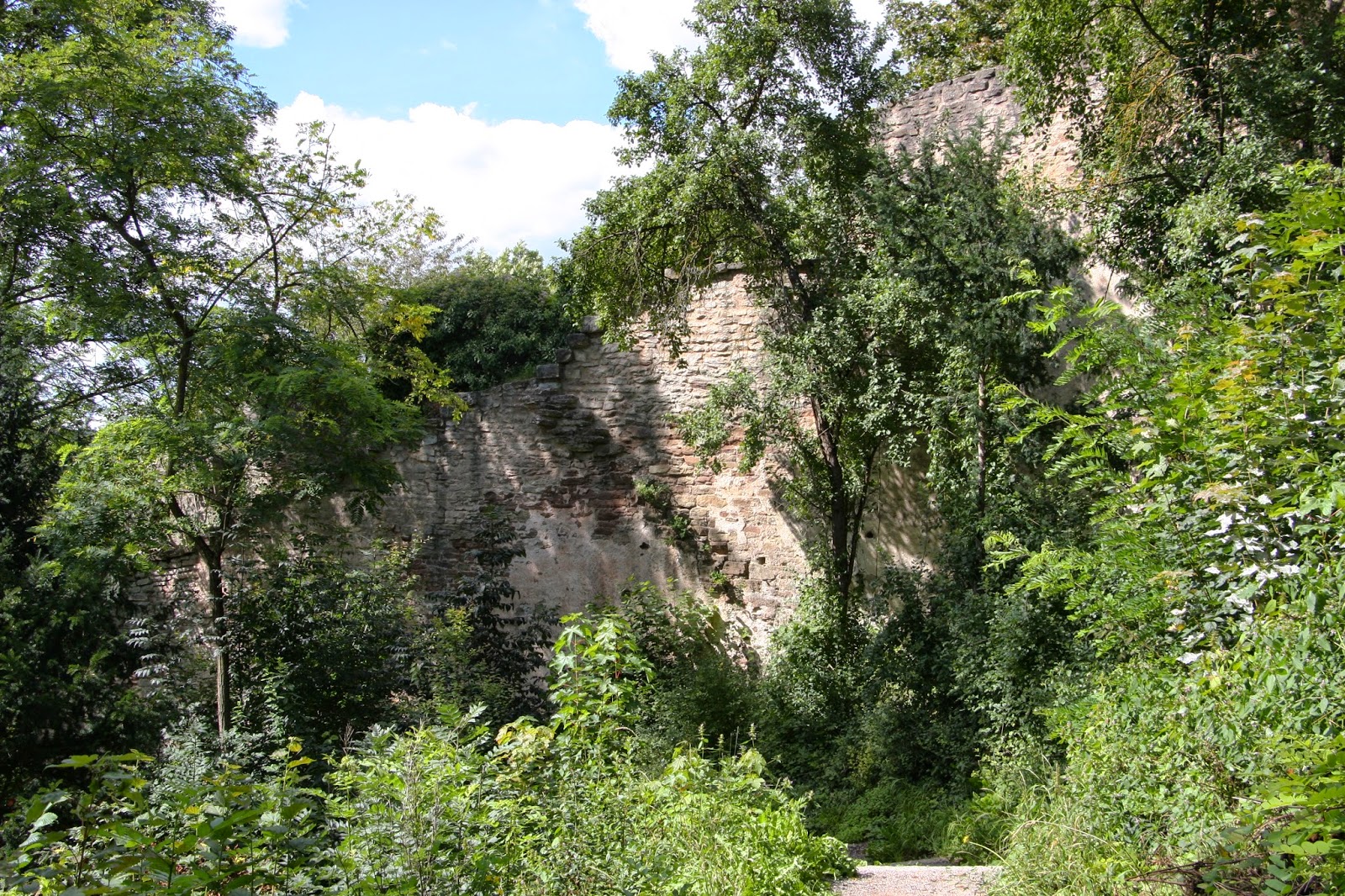 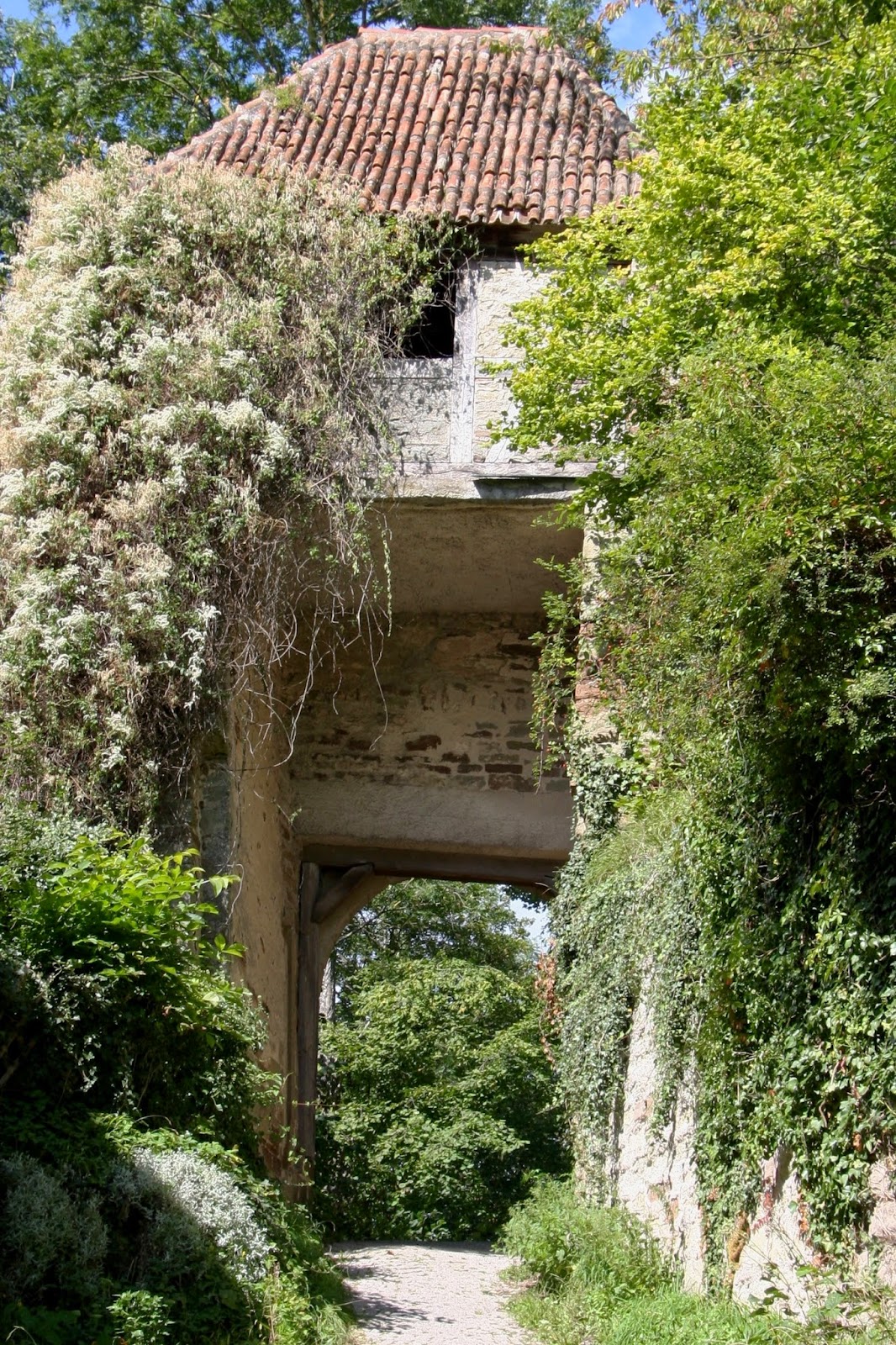 Back down in the Altstadt I found some more pretty views, and one of the most unique stairways. 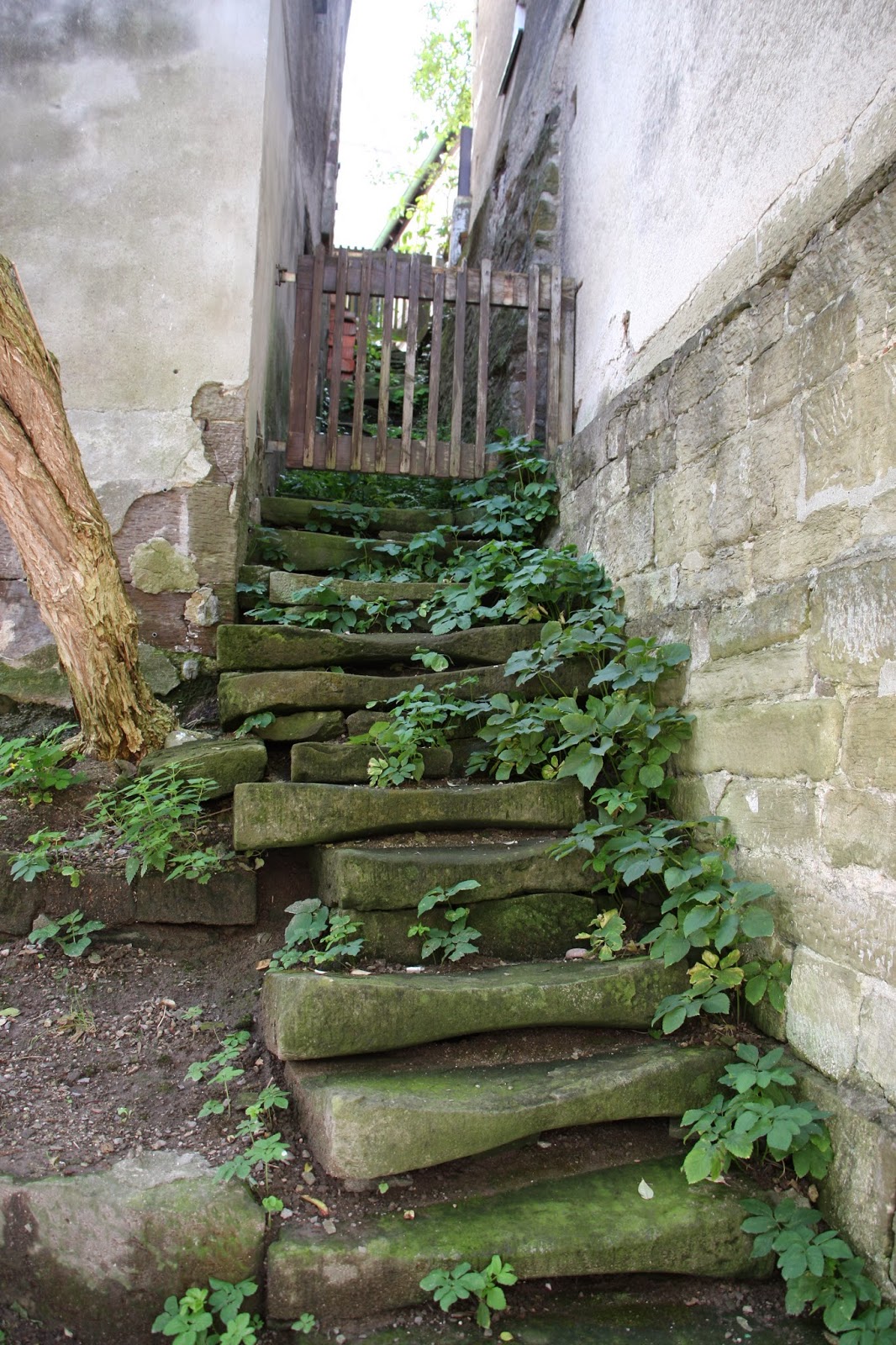 This is the Löwenstaffel. Staffel, or even better Stäffle, is Swabian for Treppe, or steps. Löwe means Lion, and the steps were named for the former inn located nearby. These steps were made of sandstone, and through use by people with hard-soled shoes, the steps got worn. The Swabians, as I have written before, have always been a frugal people. Instead of replacing the worn stones, they were flipped over around 1920 and nestled in a bed of mortar which has since eroded away. Over the years the steps became worn again, and now the stairway is blocked off by fences on both sides.


Unless you really want to delve into the history and take a guided tour of Herrenberg, you can probably see and photograph the sights in just a few hours with a stop for coffee and/or ice cream. Take your time. Look for unusual views - and don't forget to stop and look behind you! When you see a narrow passageway, go through it. When you pass a stairway, go up or down it. Therein lies part of Herrenberg's charm.

P.S. I may be breaking a "never publish two posts in one day" blog law, but I went to both places the same day, and so this was really just a two-part post.
Posted by Ami im Schwabenland at 19:56