A Week in the South

In celebration of my parents' Golden wedding anniversary this year, we flew to the States to spend a week with my kids, my brother and his son, and my parents. We stayed at the Fairfield Glade resort near Crossville, Tennessee in a 4-bedroom, 4-bathroom condo with kitchen, living room, dining area, balcony, and washer & dryer. My parents bought a timeshare there back in 1981, and all of us except Martin have been there between several and many times since then. We had a great week together reliving old memories and making new ones, golfing, taking day trips, going for walks, playing cards, and enjoying each other's company.

Martin had never been down South before (the furthest south he'd been before this trip was Illinois), and he found life there to be quite different from what he's accustomed to. In the weeks before our trip I tried to help him get used to the Tennessee accent by tawkin' funny in th' evnin', but I couldn't prepare him for everything.

I can't reproduce the Tennessean accent very well in writing, but I spent enough time there in my youth that I could probably pass as a native speaker. It's not as classy as British English and not as cuddly wonderful as Scottish, but it's charming in its own way. We had to wait in the Nashville airport for a few hours on our first full day for my kids to arrive from Wisconsin, so Martin had his first taste of fresh, authentic "Suthron". We passed a few glances back and forth before I grinned and said to him, "Ya thowt aye'uz keedin', din'cha?"

My favorite moment, though, was when a grandma and ma were sitting together waitin' on someone, trying to keep the ma's chile under control. We managed straight faces when Granny lit out with "I tell yoo what, yoo go pass 'ate chair, I'mo whoop ya!" (I tell you what, if you go beyond that chair, I'm going to give you a spanking!") "I'mo whoop ya!" has become our new way of saying to each other, "You shouldn't do that," and with practice and language coaching, Martin is getting close to being able to say it like a native still sounds hilarious.

"If you're in a hurry, you're in the wrong place."

Yeah, the Southerners don't do anything quickly - bagging groceries, ringing up a sale, driving, changing lanes, getting to the point... They are very, very friendly and love to chit-chat and ask questions. Everybody says, "Hi! How y'all doin' today?!" and I half suspect they might actually care about our answer or at least be willing to listen to it. If we say more than a few words to anyone, they notice our funny-talk and ask, "Where y'all from?!"

One afternoon a maintenance guy drove to our unit to check if he needed to clean the grill, and Martin happened to be sitting on the front porch. Thirty minutes later I started wondering why he was out there so long, and I went out to find him. The maintenance guy was standing out there with Martin chatting up a storm about all kinds of things, and Martin couldn't find an escape. For the next four days there were multiple moments when Martin said, "Oh, that's another thing my friend told me..." If you understand how much Martin abhors small talk and chatting at all with strangers (he'll leave a store without the thing he needs rather than ask an employee where to find it), this situation is all the funnier.

Another time I was with my brother and Martin trying to leave the shooting range (see below) although the guy in charge wanted to tell us everything about the club, the members, and the nearby town. The lads were nodding politely and responding with "mmms" and "uh-huhs", and I finally said we had to go because we had dinner plans. "OH! Well, where y'all goin' to eat?" We told him, and he went on about that place plus other options including the fancy places like Applebee's and Olive Garden that required a 40-minute drive. I don't actually remember how we got out of there.

That's part of Southern Hospitality, though, and the locals surely go out of their way to make visitors feel welcome. Coming from Germany, where only your closest friends ask how you are and pretty much everyone hates small talk, it took Martin a few days to embrace this aspect of life in the South.

As I mentioned in a previous post, gun laws in Germany are very strict and one can't just drive down the road, rent a gun, and shoot stuff. But this is Tennessee. There was bound to be a place for shootin' after a round of golf. Sure enough, we found a "sportman's club" down the road a piece off Peavine Road, and I gave them a call. I said my husband and brother were interested in shooting and asked what they offer. For those without their own guns, the club rents 12-gauge pump-action shotguns and sells boxes of ammo for trap shooting. I explained that my husband is a German resident and citizen and asked if that would be a problem. Nope. I was going to tell him that Martin shot all kinds of guns during his time in the German army, but he wouldn't have cared. So we hopped in the car and drove down there.

The guy (I'll call him Gus) was really nice, explained the procedure after we signed a waiver saying we wouldn't sue him for anything, gave us ear protectors and the guys safety glasses, and out we went. Gus manned the trigger for the clay pigeons, gave the lads some tips along the way, and was all business during the shooting. (It was only after the weapons were put away that he turned into Chatty Cathy.) The lads met with varying degrees of success, but they each hit more of the clay pigeons than I could have, and they enjoyed the activity. 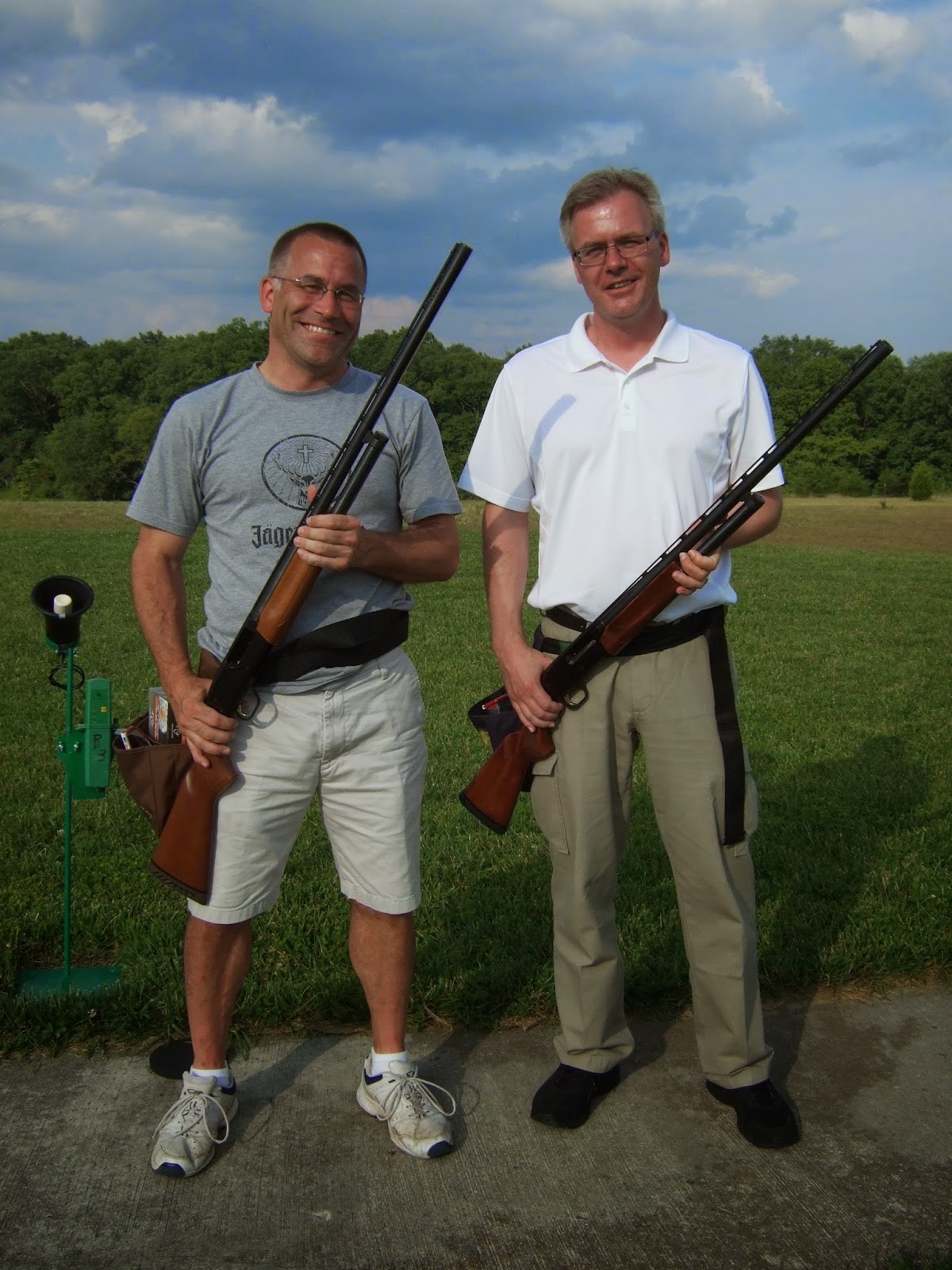 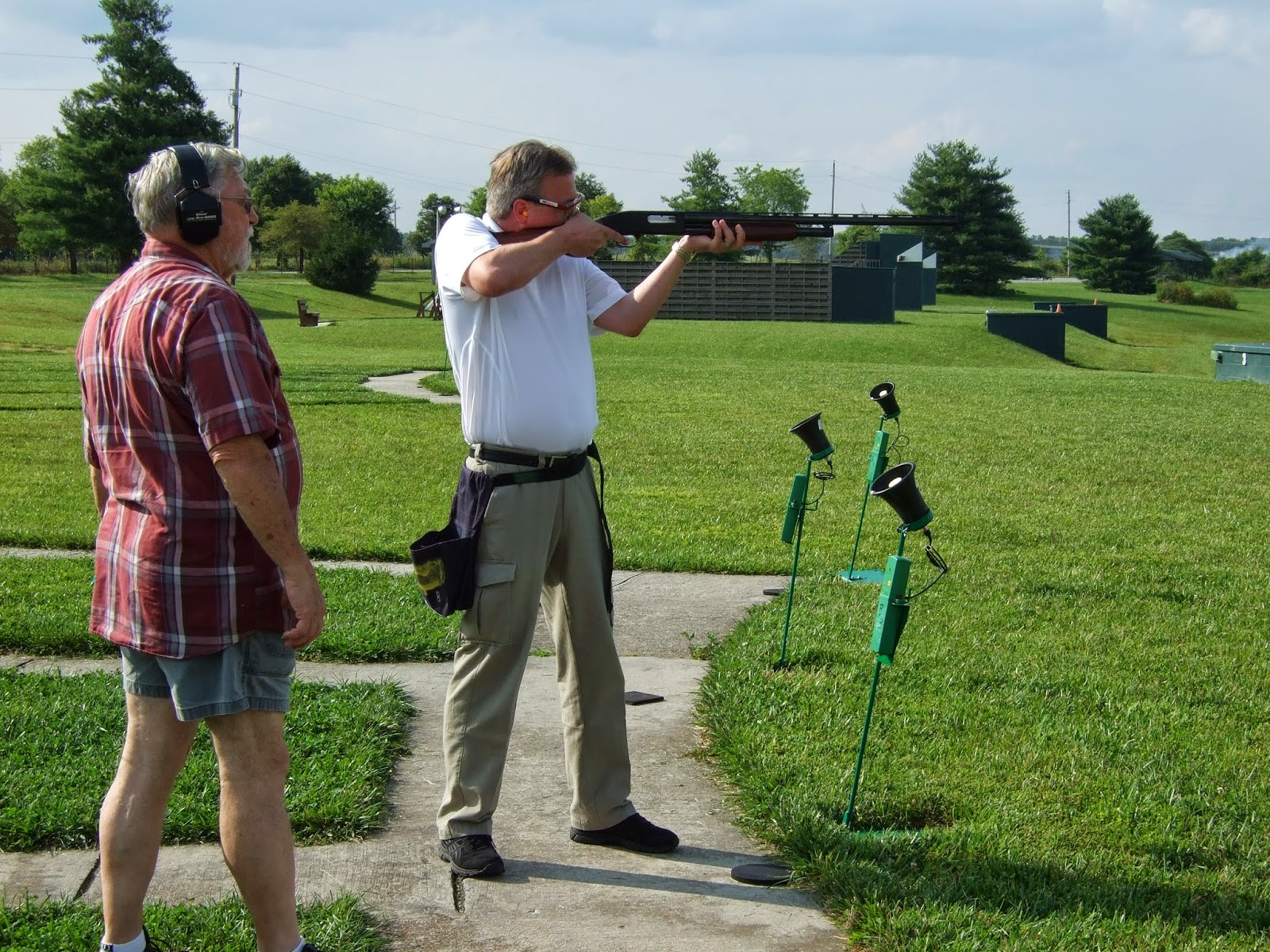 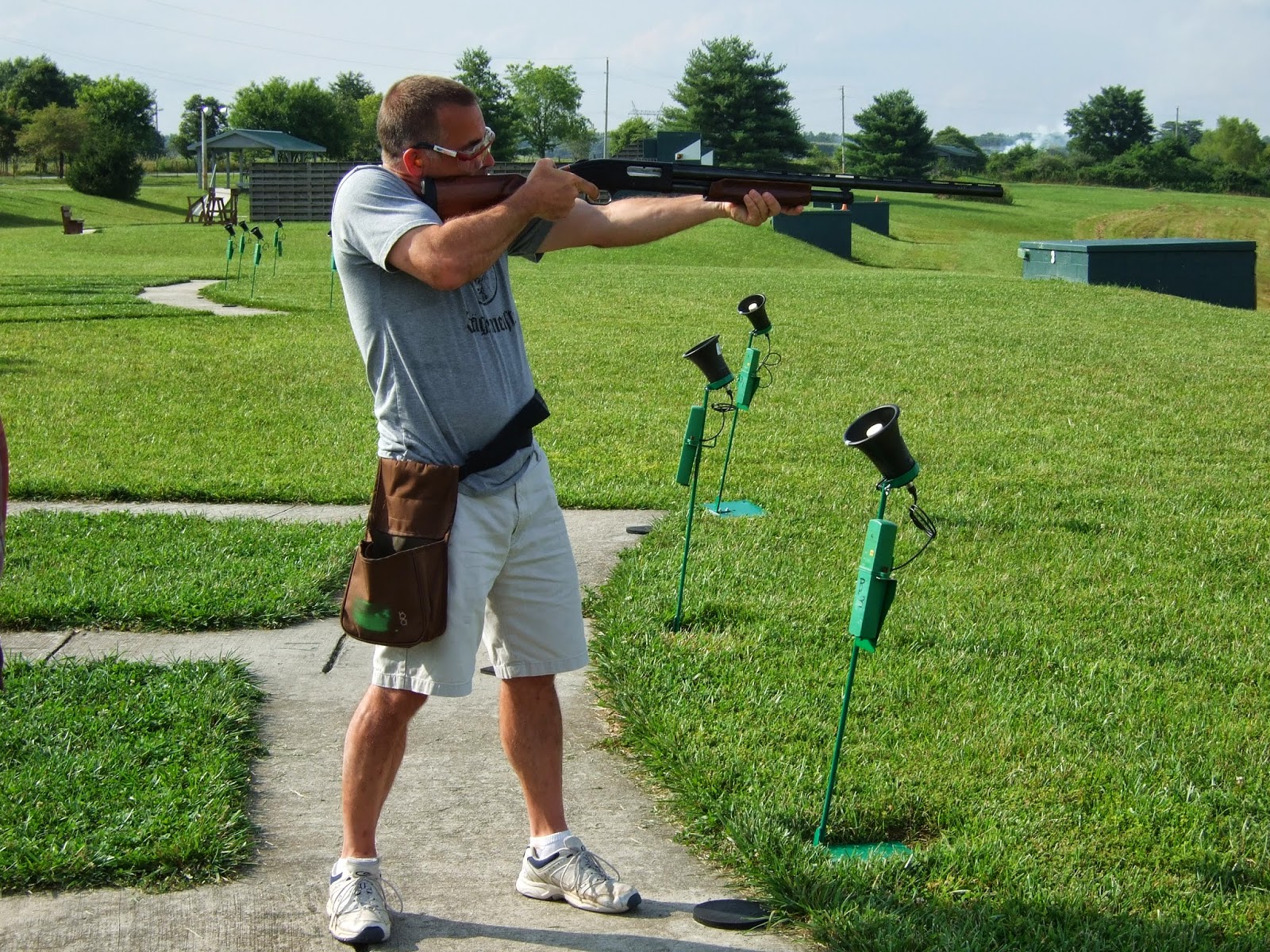 Driving in the South

Actually, this is nothing special about the South - it's driving in the U.S.. Just because he could, Martin passed in the right lane while giggling fiendishly, lingered in the left lane a few times when no one was behind him, turned right at a red light, and once he even turned the car on before all the passengers were seated and buckled up. In fact, I was the last one to get in the car, and I was still inside the condo when he started the engine!

On the little country road on the way to the shootin' range, we passed a small brush fire in a field. It was probably contained, but my brother mentioned it to Gus because we didn't see any people nearby. "Hm," Gus said. "I don't know who to call. [This is just a suggestion, but maybe the fire department?] I know the guy who owns the land, but I don't have his number. Well, let's head on out." As we passed the field again an hour later, it was still burning. 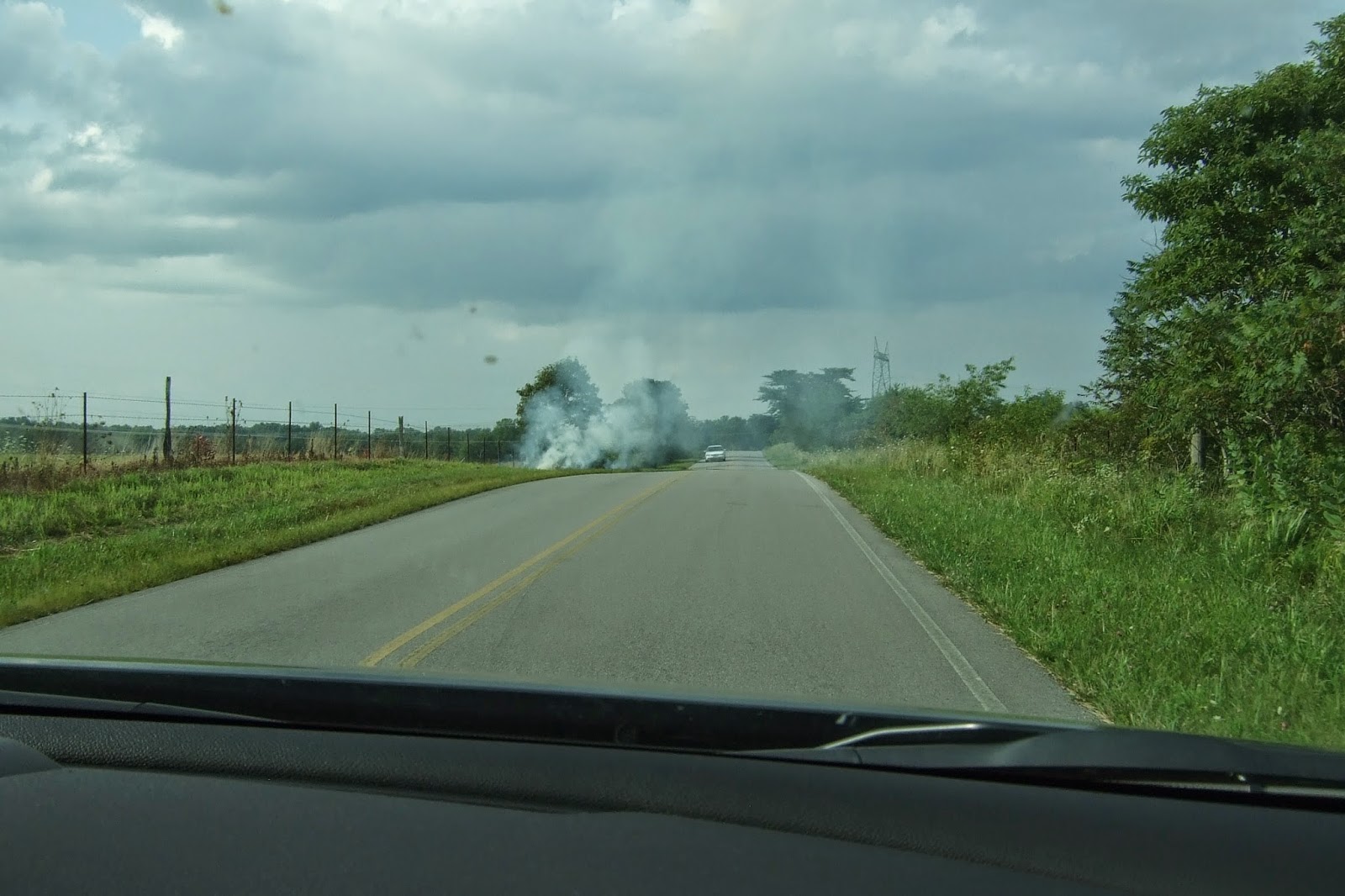 Life down South might be different from what we're used to, but we had a great time in Tennessee with my family, had a lot of laughs, did fun things, and enjoyed the week.