This post is for readers who are interested in my little bus and train trips to explore small non-touristy towns not far from where we live. This is the best place for me to tell them about my day trip(s) with photos since there are too many for email. I do not like the layout, but until I learn how to make it more attractive, this is the way it has to be.

Today I decided to spend the day in Nagold, a darling little town of 12,895 just 35 minutes away by bus. It's a great town for shopping, but that's not what I went there to do. I had my big camera, a map, and a plan to climb up to the castle ruins (called Hohennagold) above the city.

I first went to the Stadtinfo where I bought a really nice guide book (only available in German, as far as I know) and asked the woman behind the desk how best to get up to the ruins. She pointed me in the right direction, and up I went.

The path was kind of steep, and once again I met no other people on the way up. I did pass a sign about half way up saying, "Zugang zur Burg geschlossen" ("Access to castle closed"), but I decided to ignore it and kept going. The path disappeared into overgrown wilderness, so I backtracked and took the other fork in the road - the one more traveled by. And it did make all the difference.

<< This was one of the views from the top. To the right you see the viaduct built in the 1930s, one of the landmarks of Nagold. To the left is the Protestant Stadtkirche, which is quite pretty from the outside. Being a Protestant church, it's rather dull on the inside.


But the real fun isn't the view - much better with the naked eye than any photo can show. It's the ruins themselves. I think I've finally accepted the fact that I prefer castle ruins to palaces. There's so much left to the imagination! You see rough stone walls, remnants of dwellings and walls, tall, scary towers... 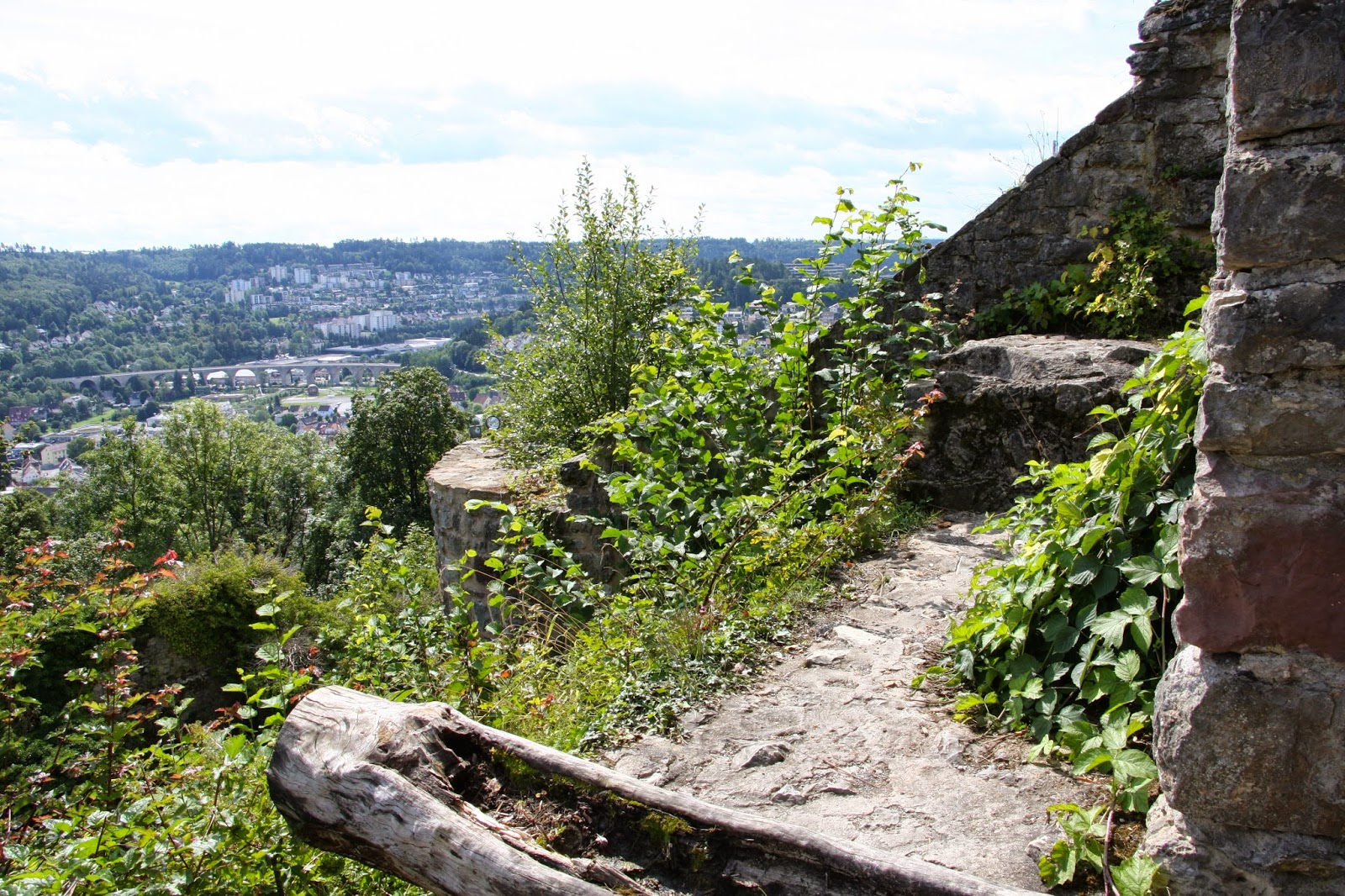 ...and cliffs. I took this picture to show one of the places I stood to take views of the town. To my back were the stone wall remnants of the fortress, and in front of me was a cliff. No railing. No sign saying "Danger: stepping past this point may lead to falling off cliff." I think, folks, if you're too stupid to step and move carefully, you probably shouldn't go to places like this. 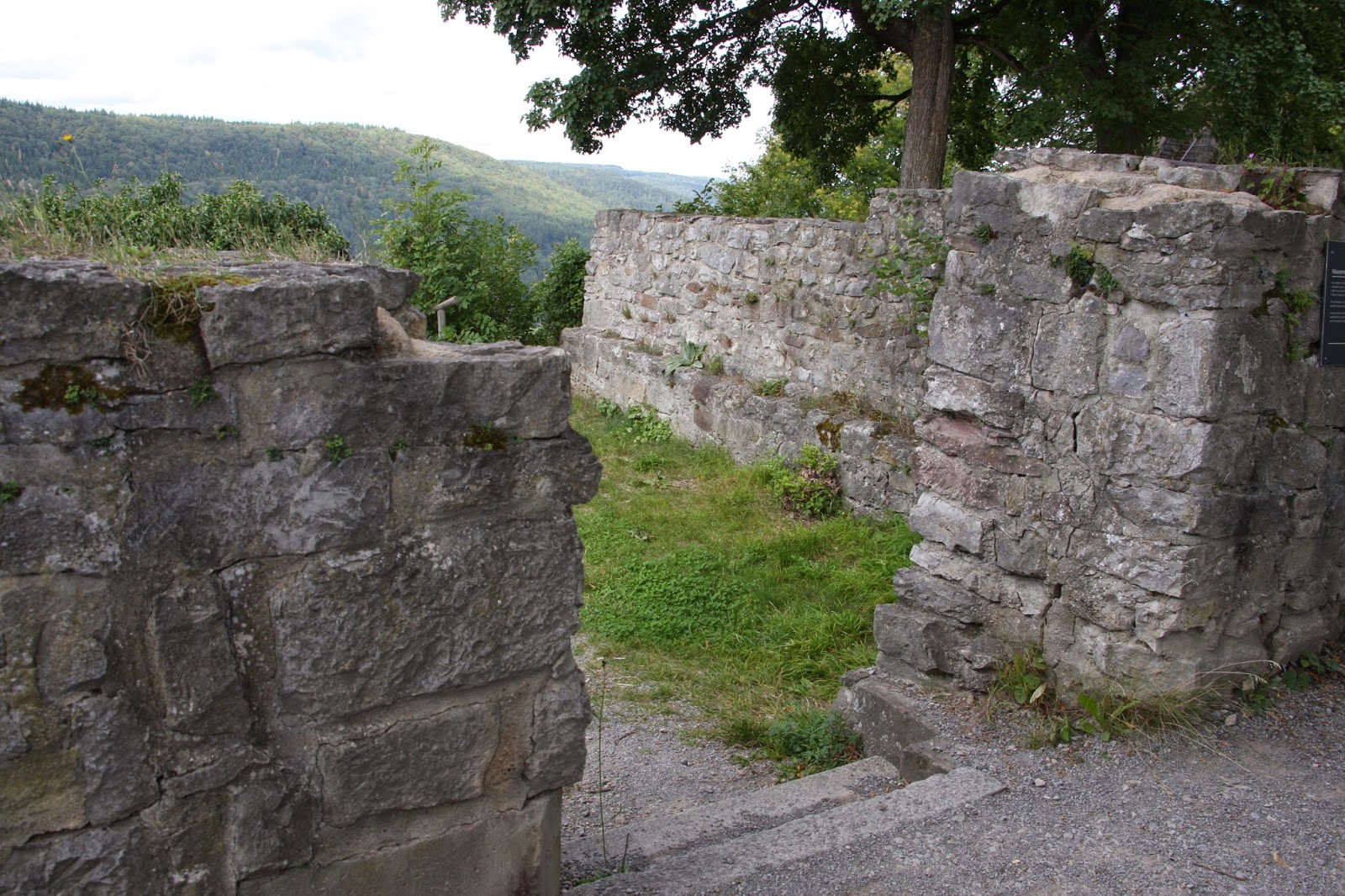 Remnants of the castle - one of the houses or apartments. Who lived here?? How many people? What did the door look like? Where was the kitchen? What did they sleep on? 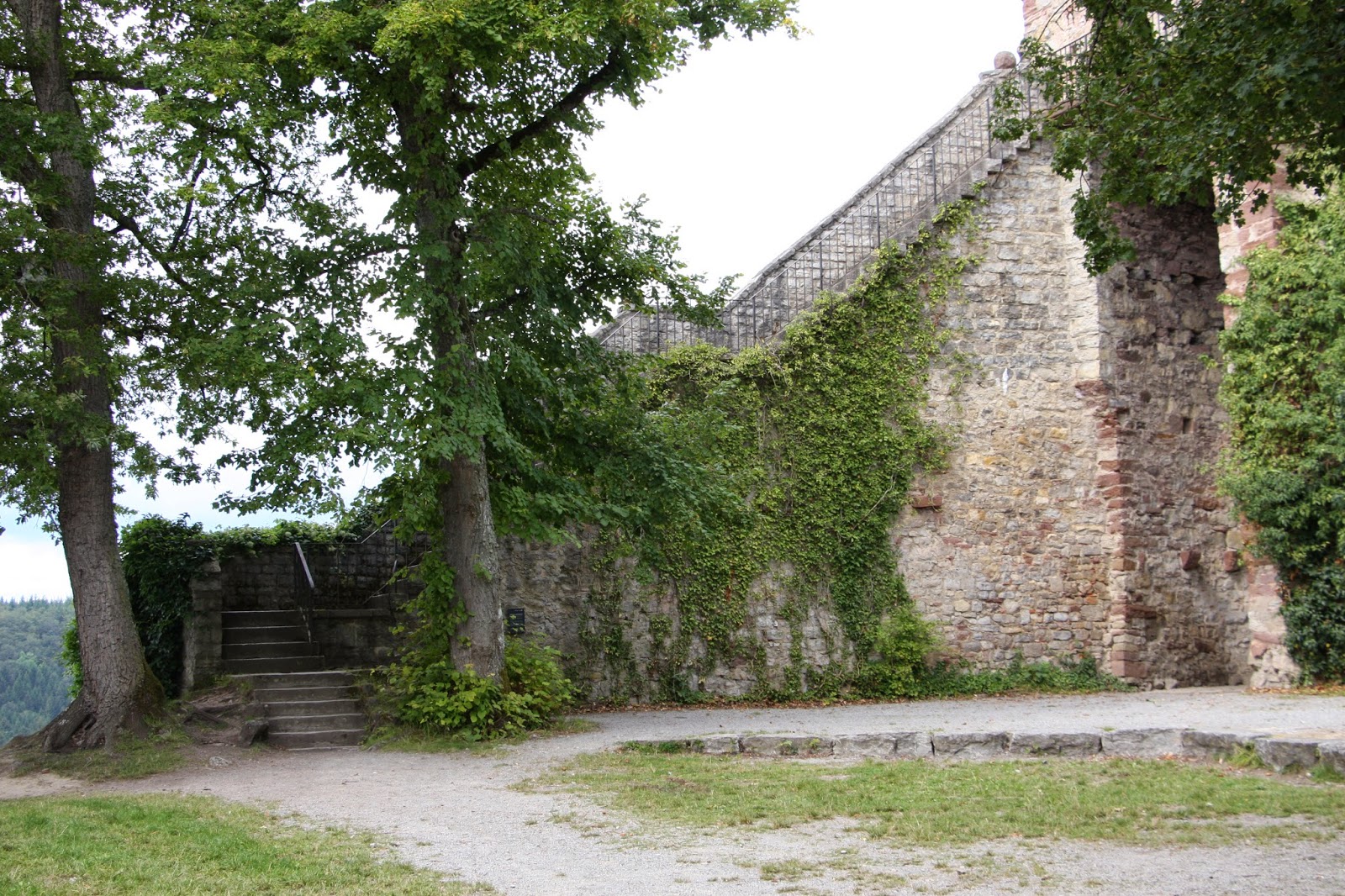 Have you seen The Highlander? This open stone stairway reminded me of a setting in that movie. I decided to climb up it to see if the view was even better. There were NO other people around, which was really cool. But when I got to the top I started to freak just a little, grasped the railing in my tight little fist, trying to fight off the mounting dizziness. I realized that if I did plunge to my death, no one would know for a while. 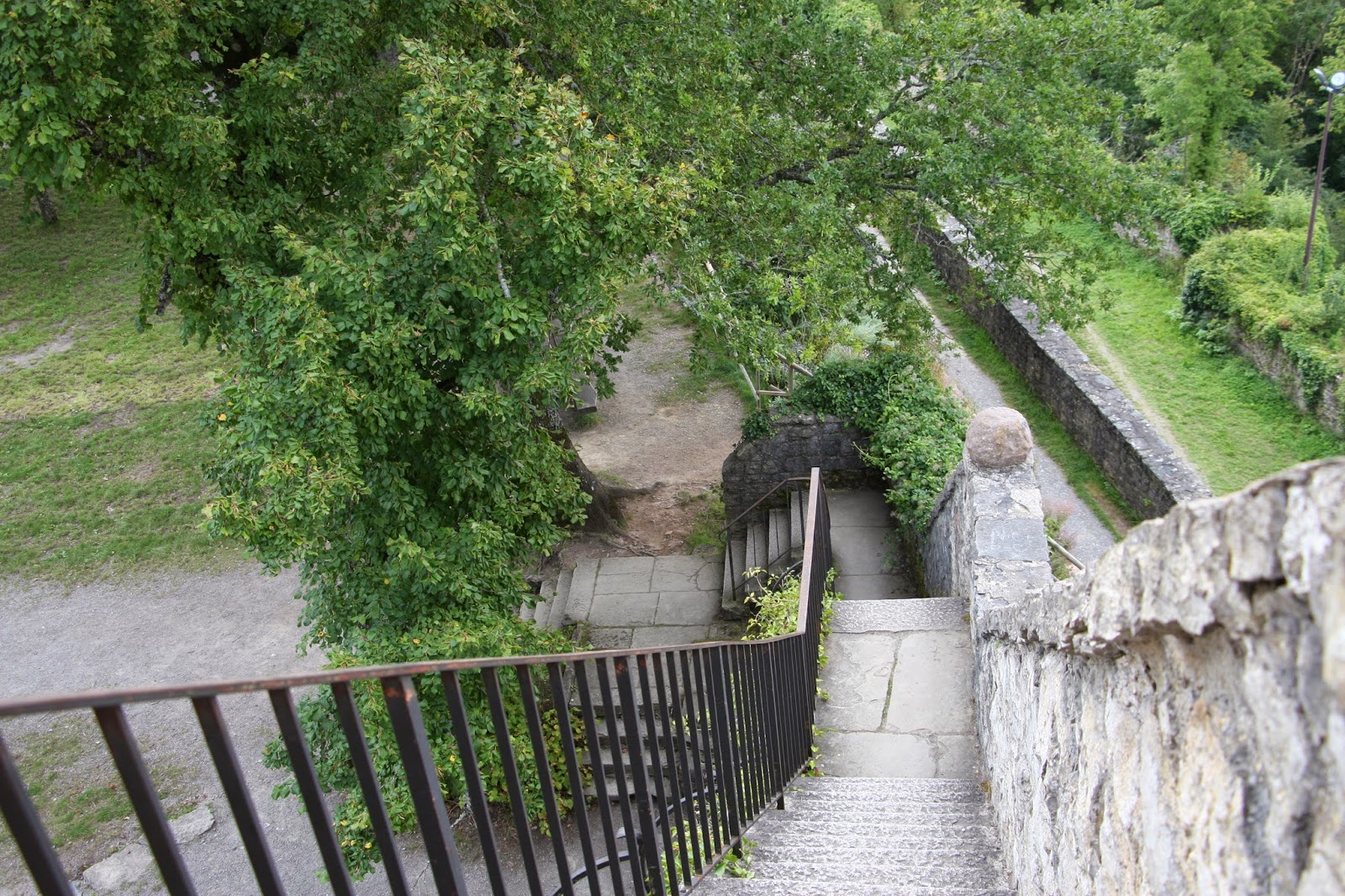 And then I climbed gingerly back down, one hand clutching the railing and the other hanging onto the stone wall.

I took this picture to prove I'd done it.

Ok, so back down the hill to the town. Down is easier. I like going down. Along the way there are boards with information for those who want to learn something. These are great for the way up, actually. When you need a breather, you can stand in front of one of them and pretend you're interested in birds, trees, spiders, or whatever is displayed on the info board. 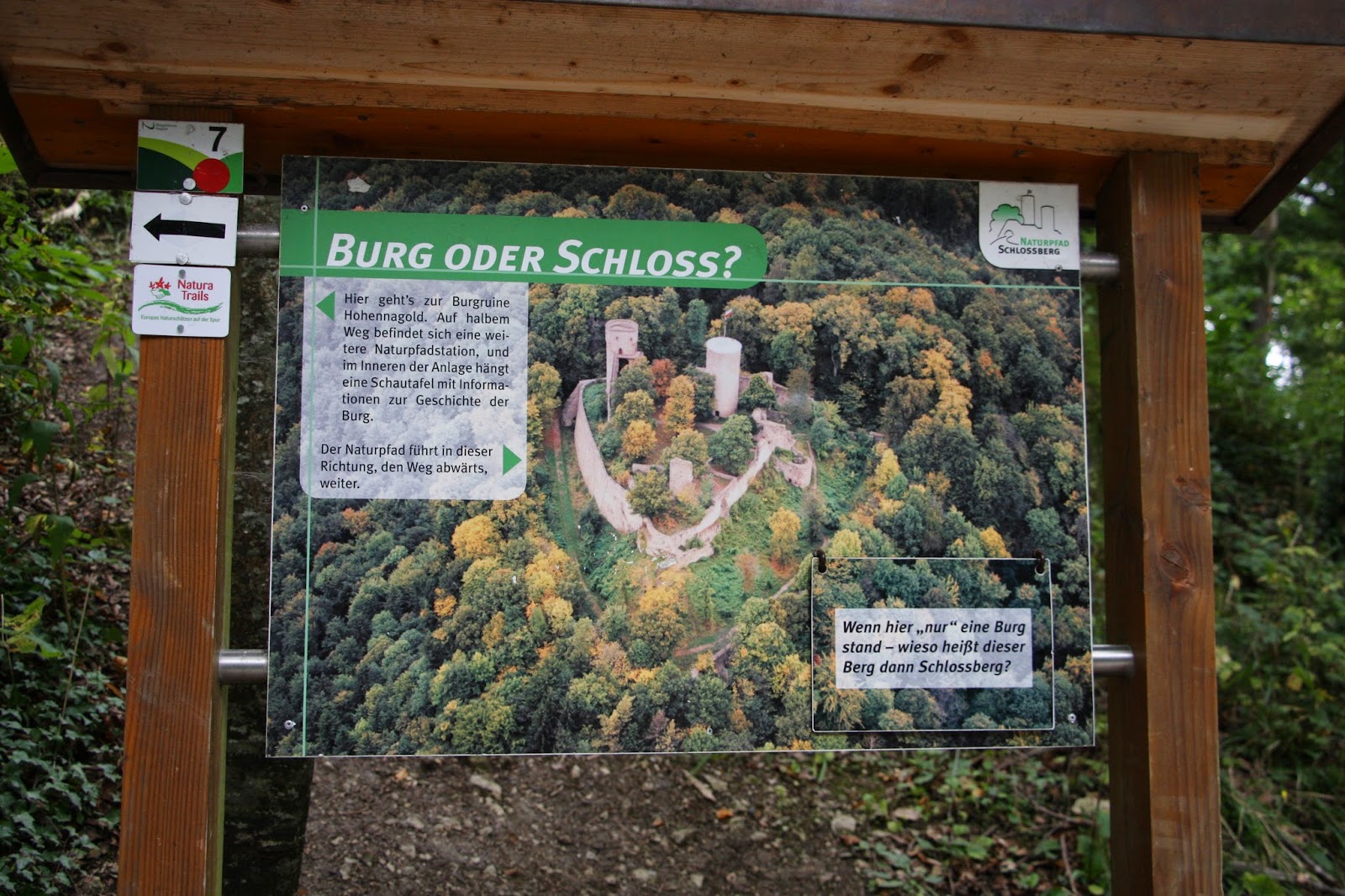 This board is explaining the difference between a fortress (Burg) and a castle (Schloss).

The question at the bottom right asks, "If this was 'only' a fortress, then why is this hill called "Castle Mountain"?  You can flip up the panel for the answer!
Once back in town I found a nice Straßencafe and had lunch. Puten-Salat (salad with turkey) and a Pinot Grigio. It was quite delicious. While I ate, I read more about Nagold to decide what I wanted to see after lunch. 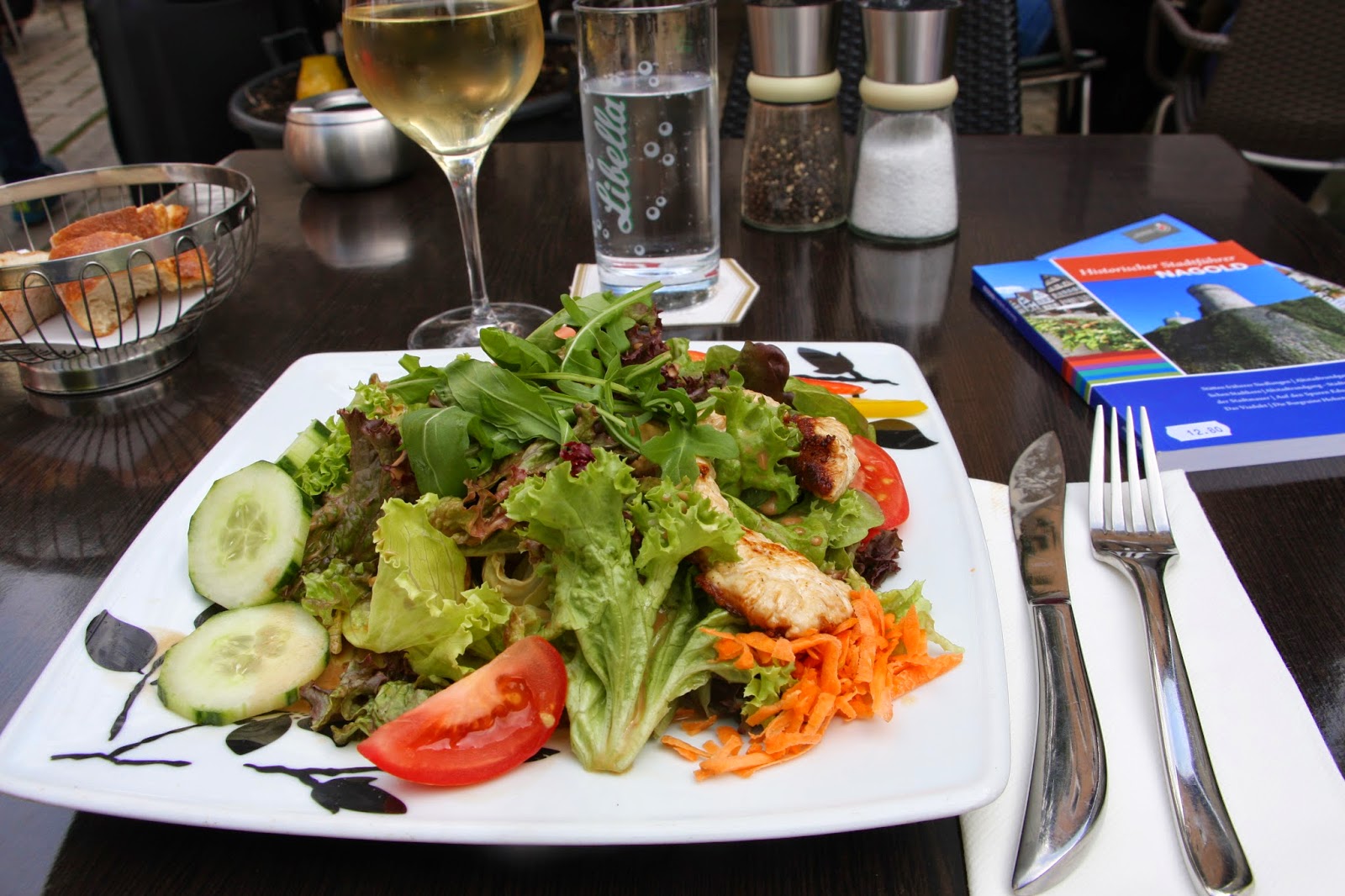 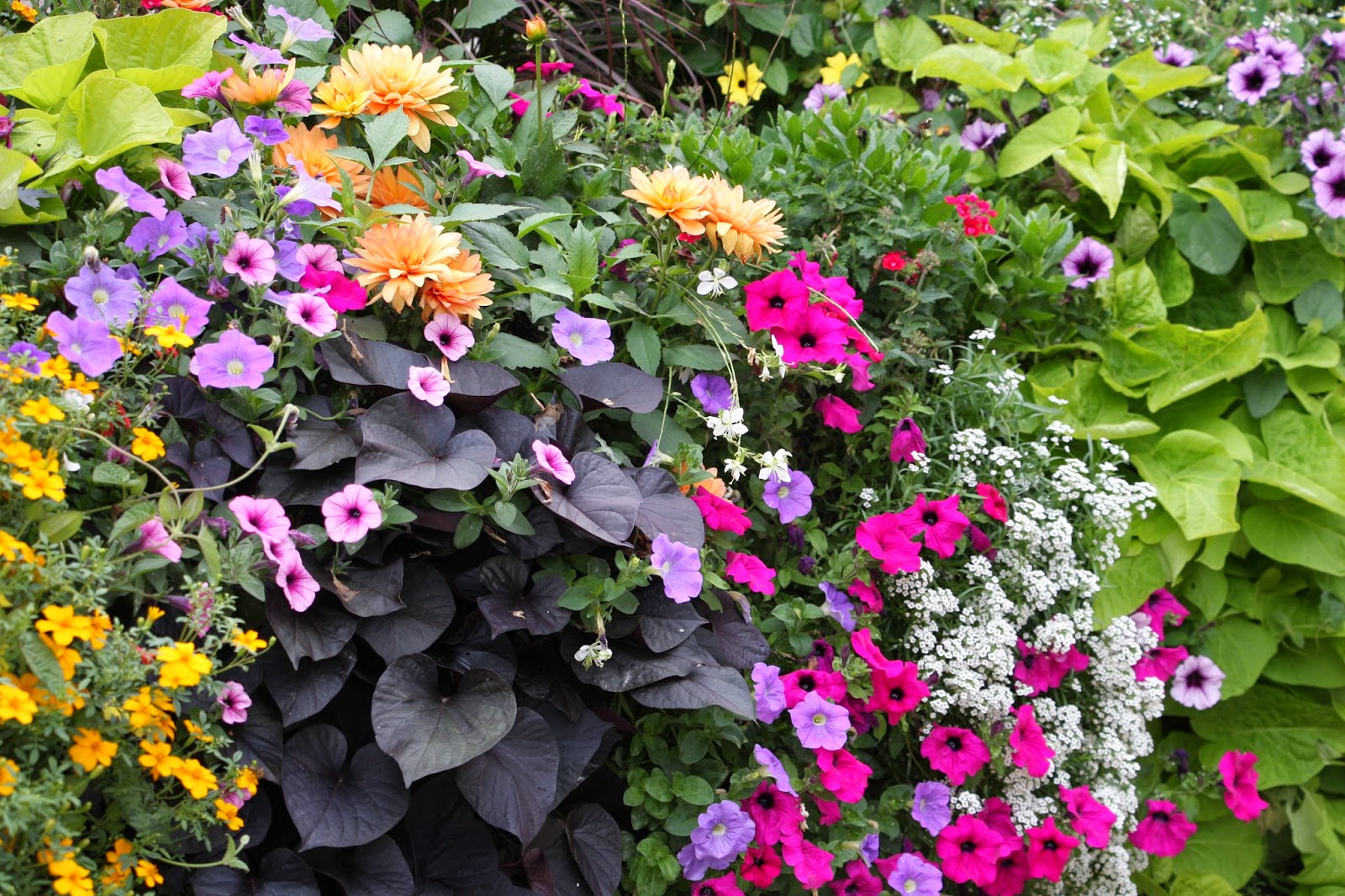 The Landesgartenschau (state garden festival) was in Nagold in 2012, and there are still beautiful flower arrangements all over town. 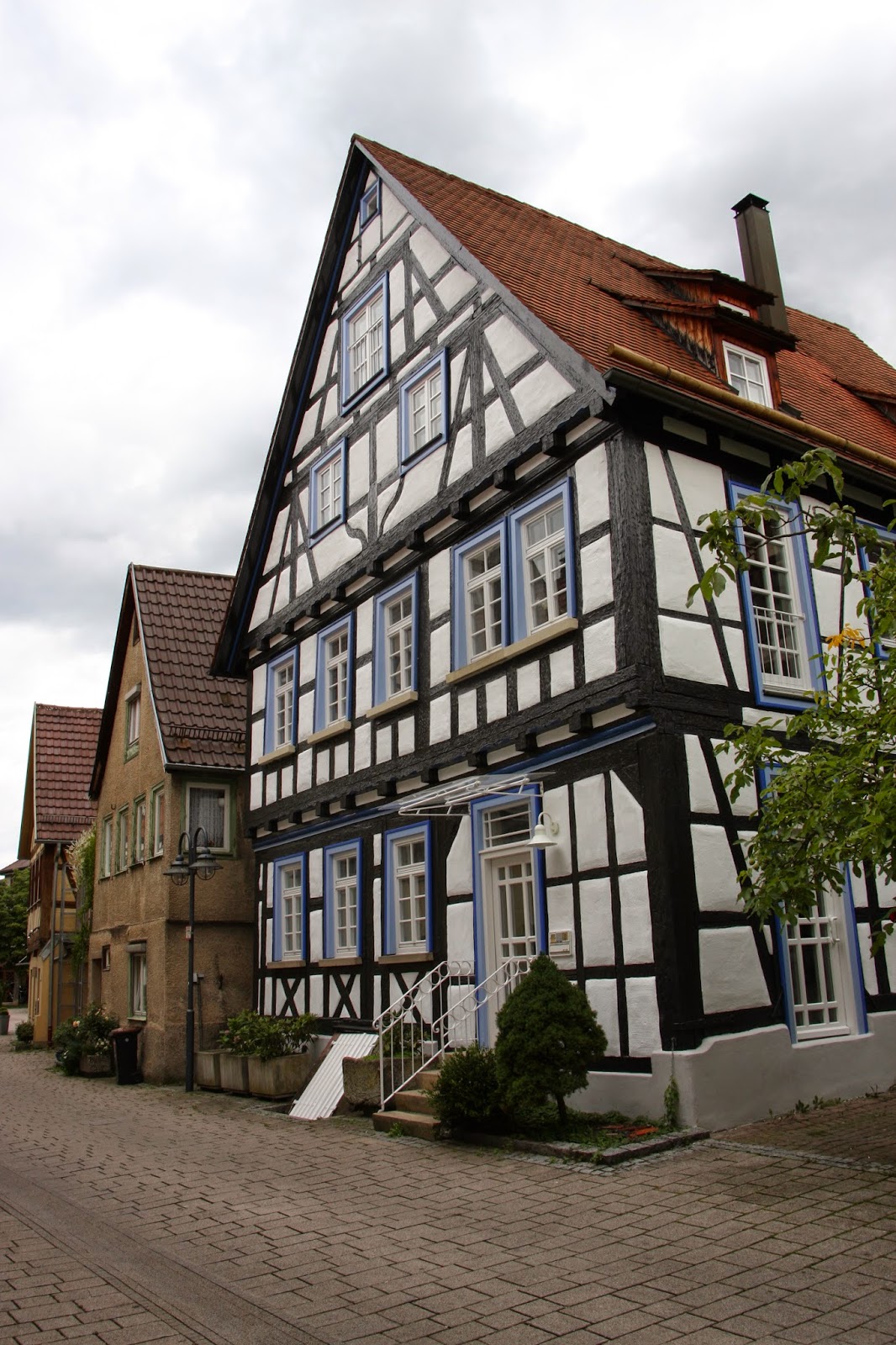 I still love Fachwerkhäuser, and Nagold is full of them. 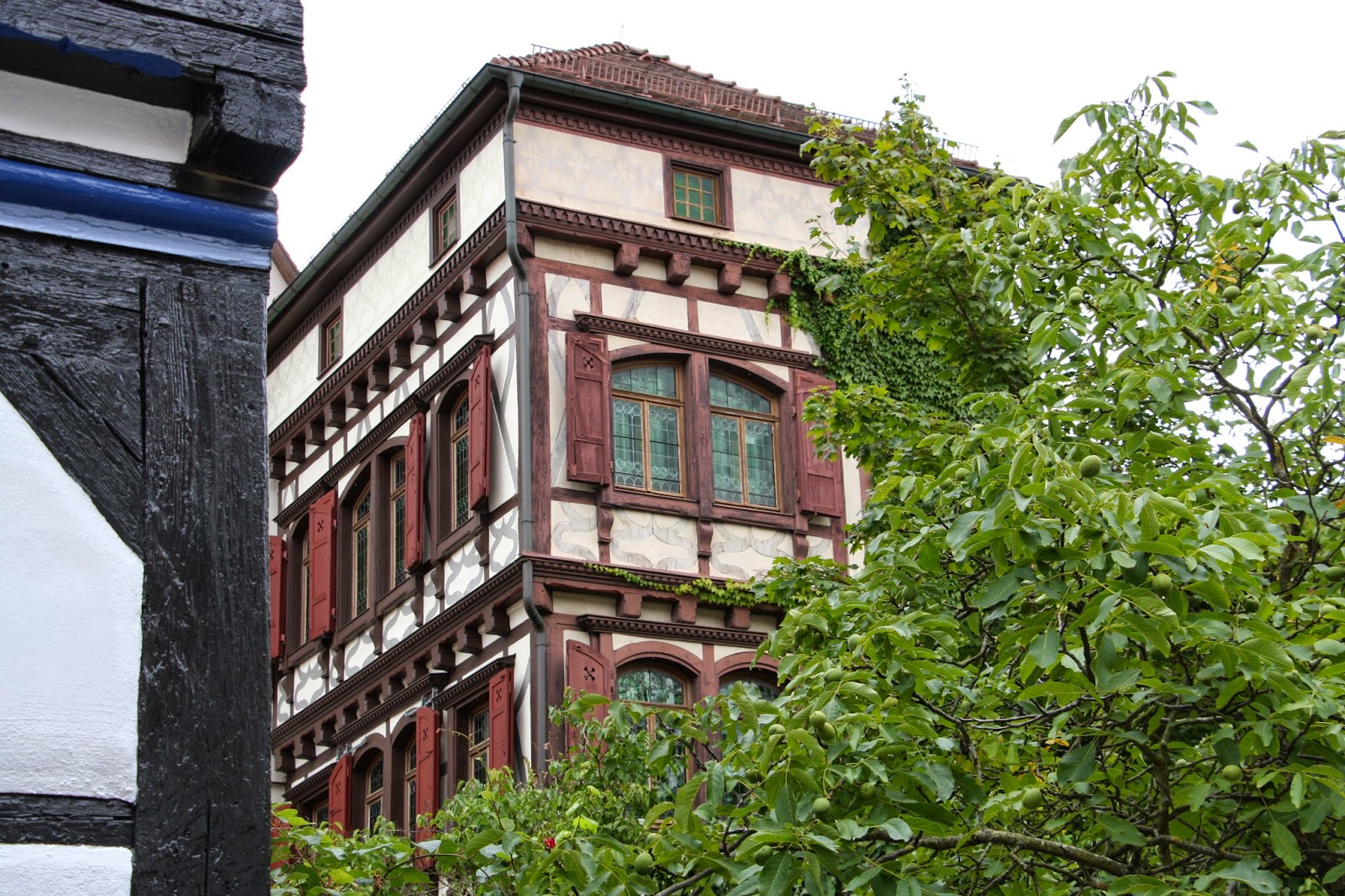 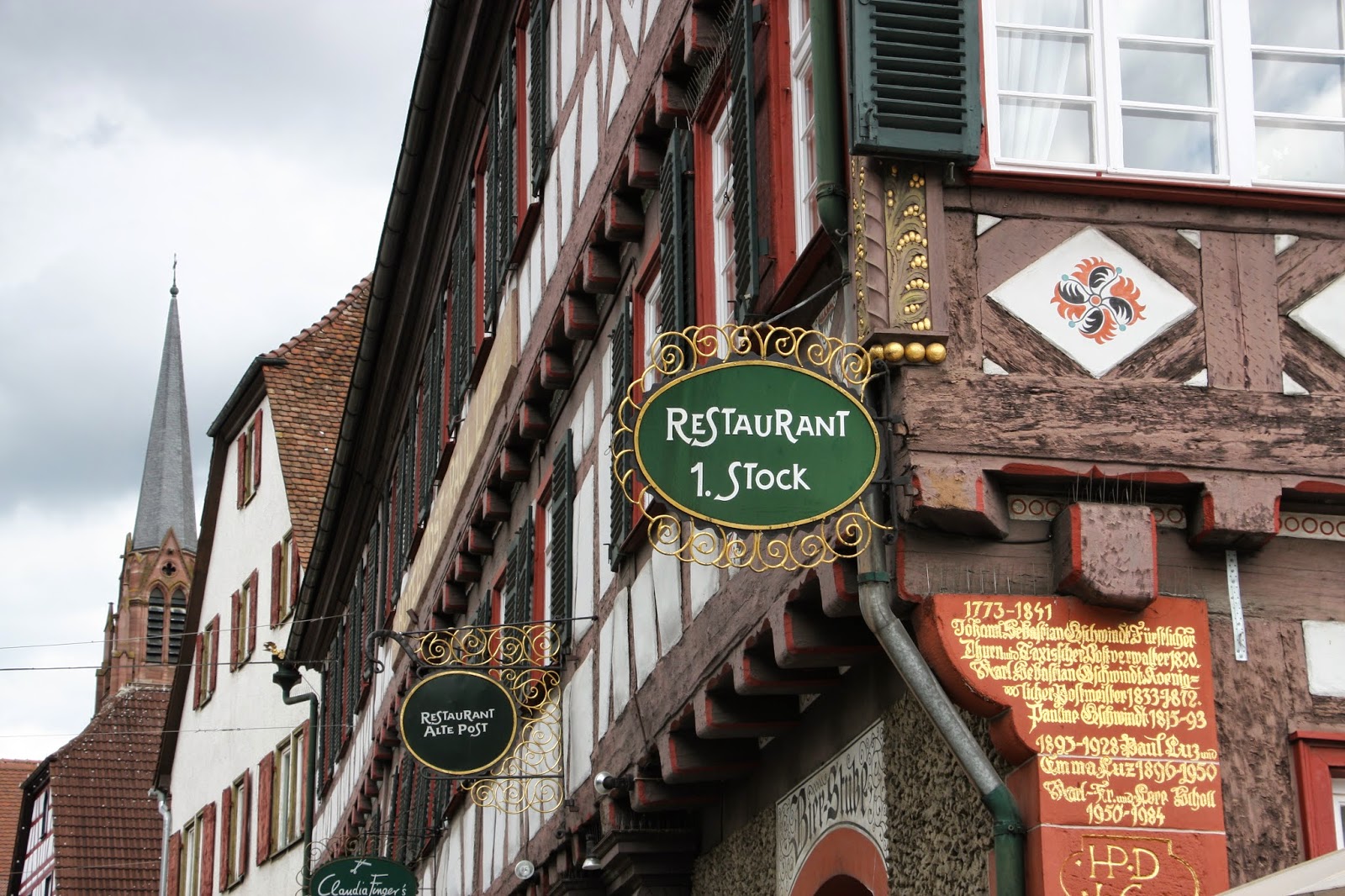 This is das Hotel Post. Duke Carl Eugen of Württemberg stayed here once, as did Napoleon, if the guest book is to be believed. It still has a well-reputed restaurant on the ground floor as well as accommodations. One can even stay in the "Napoleon Room," where the emperor spent a night. 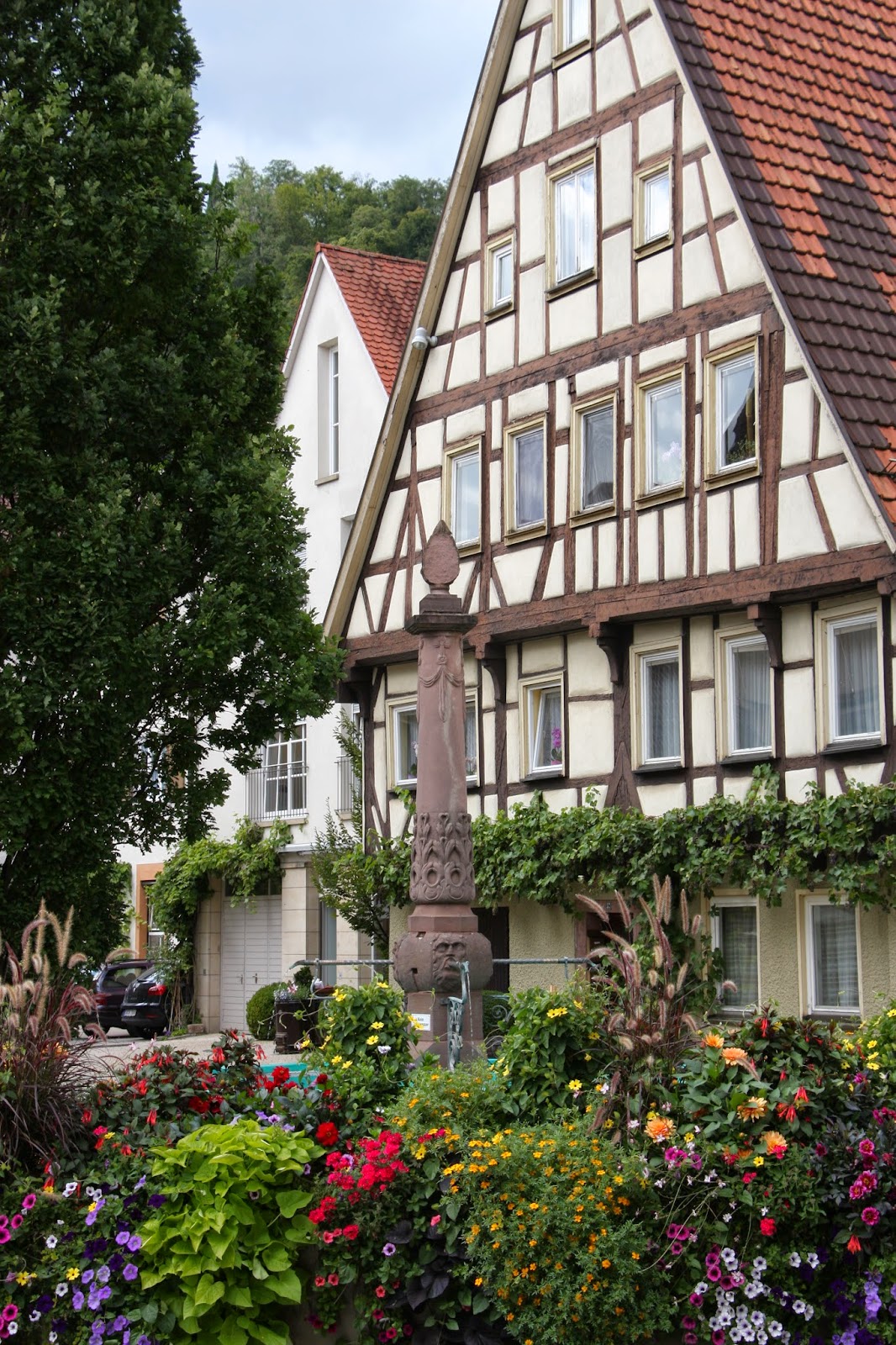 Most of these beautiful buildings have a story and a significance to town life back between the 13th century and now. I absolutely recommend visiting Nagold and learning about them, but I will not bore you here. Just enjoy the views if you like. 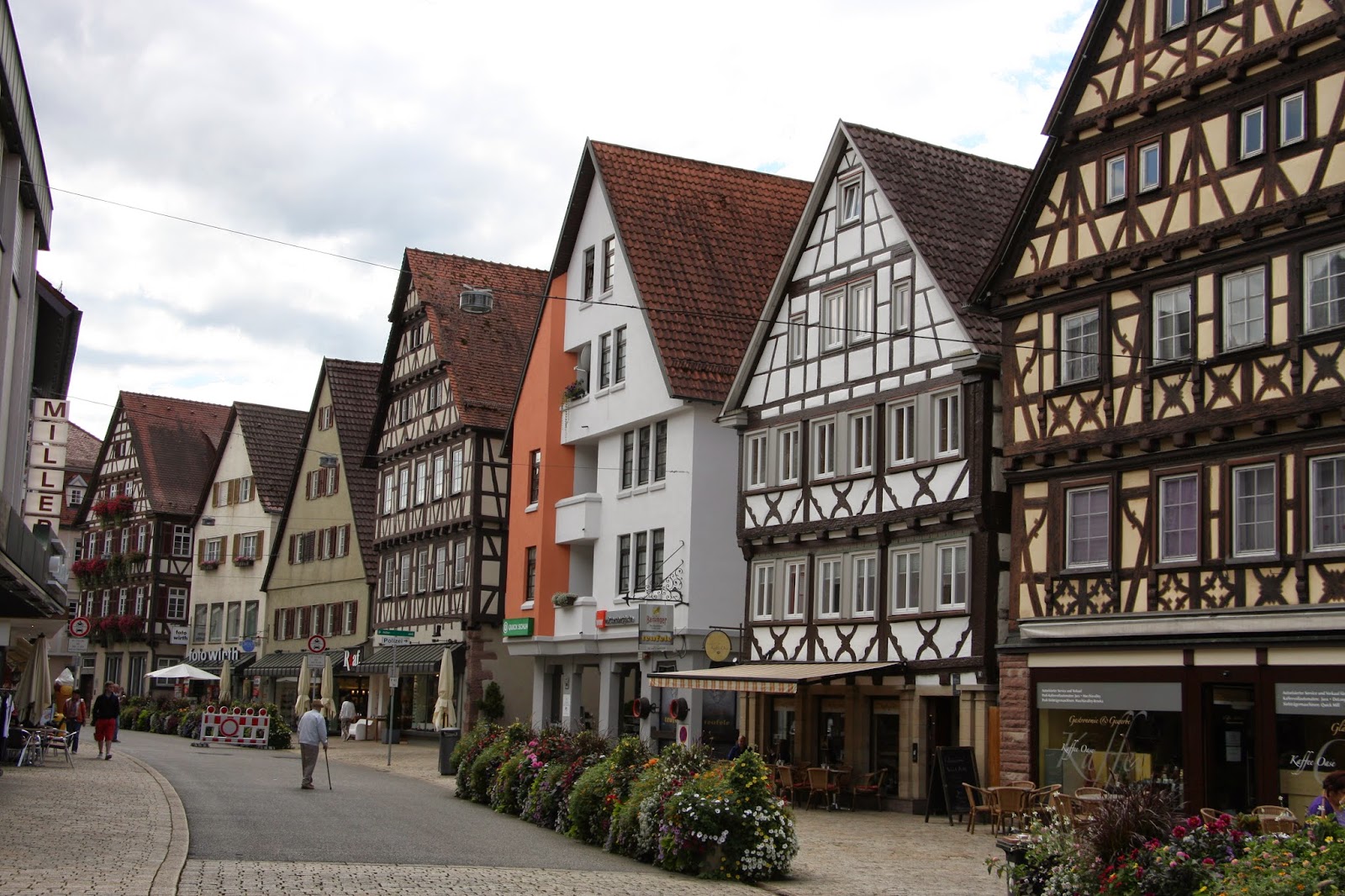 After strolling around town I decided to meander out of town to visit "one of the oldest churches in Germany" and its Friedhof. This might sound morbid to some, but most cemeteries in Germany are simply gorgeous. This one took my breath away. 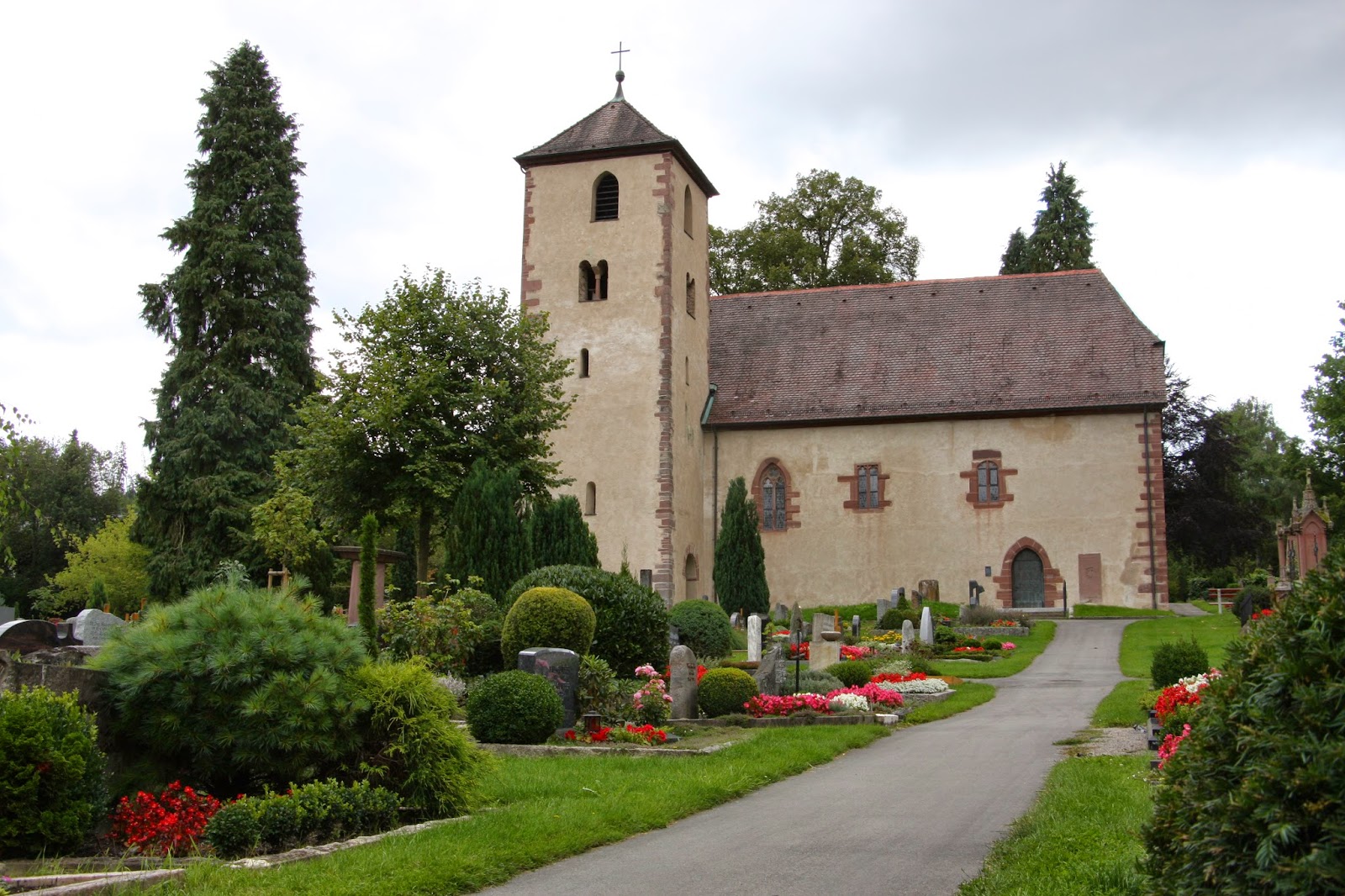 This is the Remigiuskirche. It is the oldest building in Nagold. 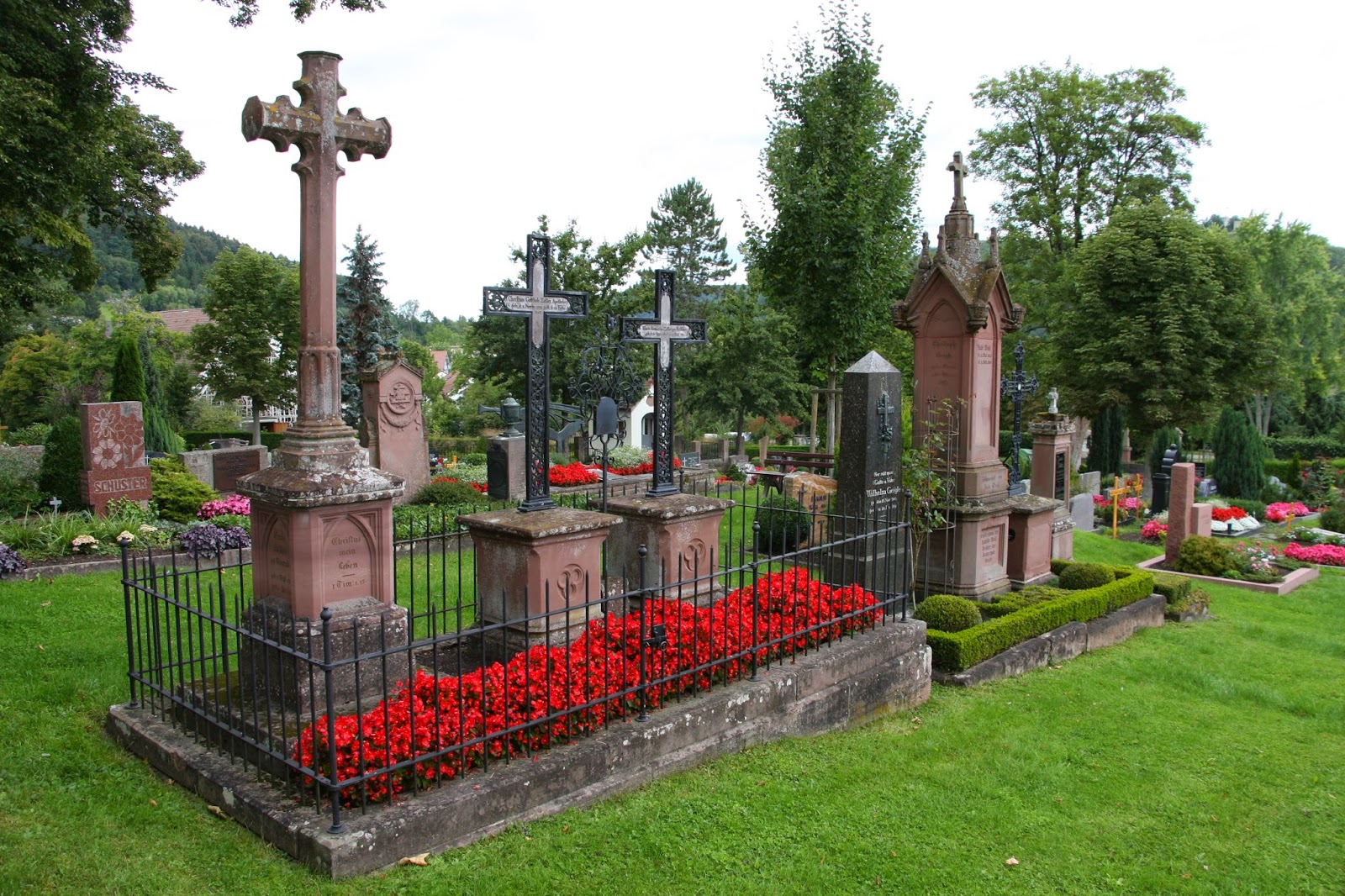 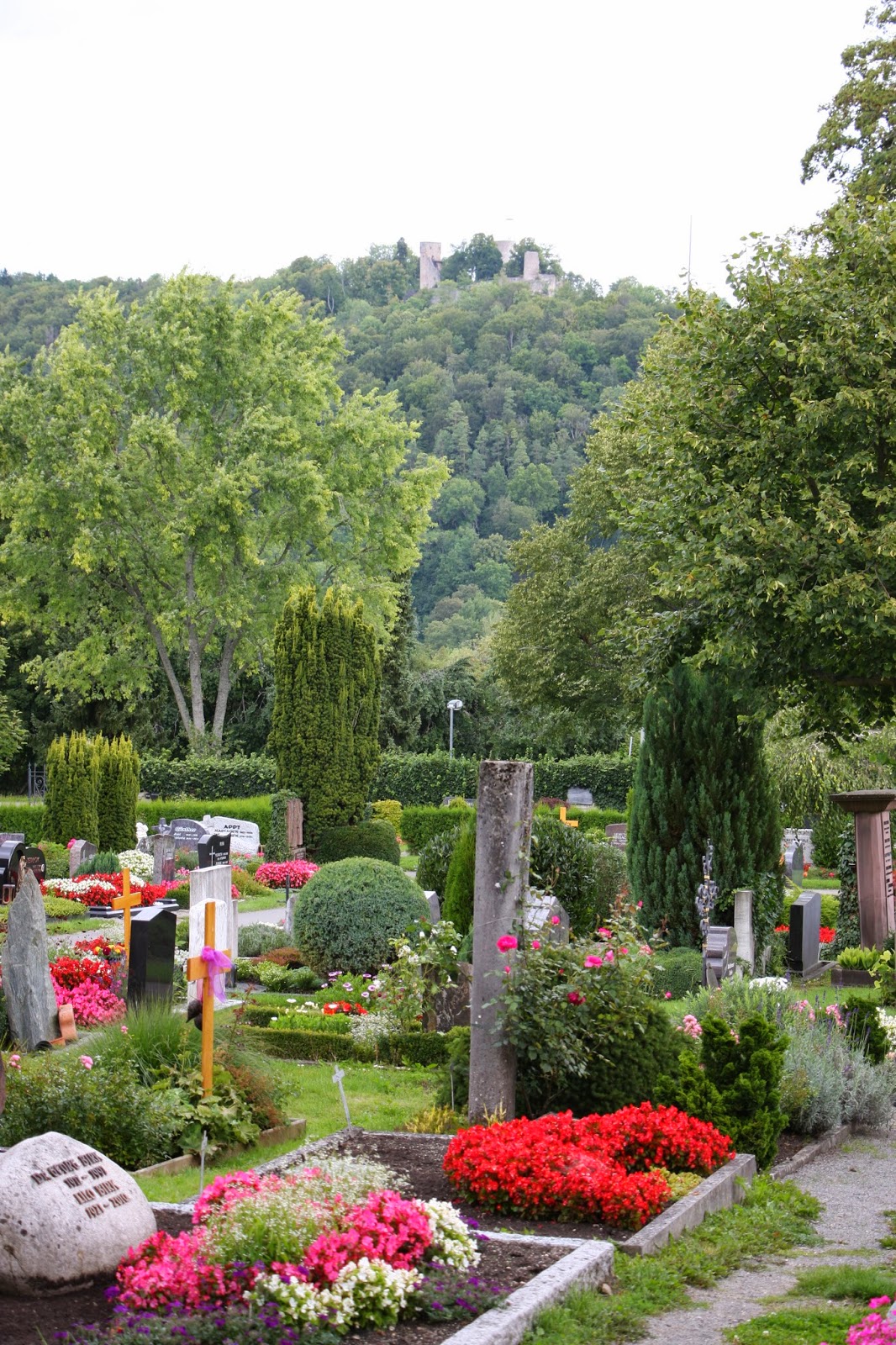 That's Hohennagold up on the top of the hill in the background, where I was this morning. 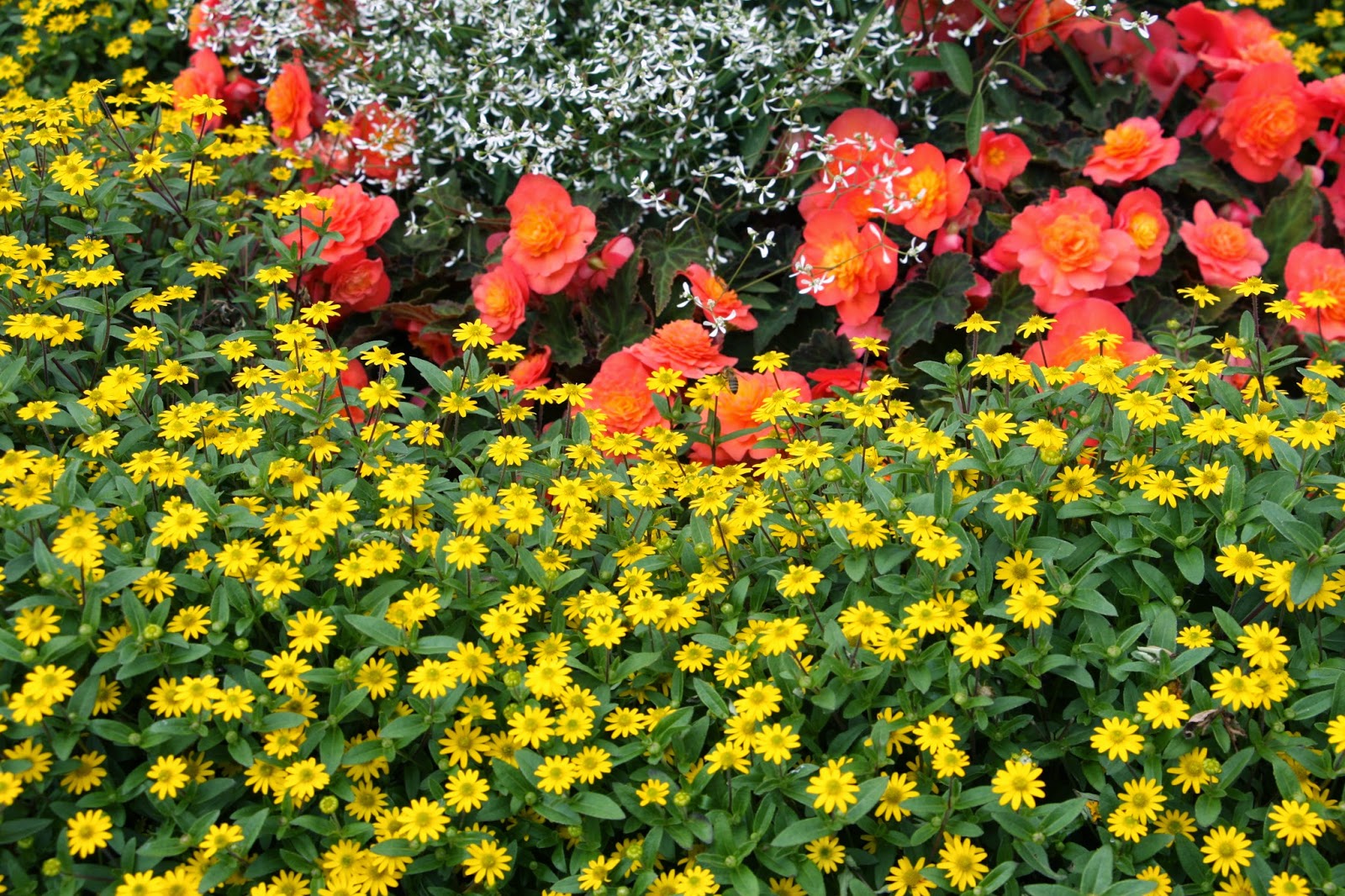 There was a funeral going on in the chapel while I was there. The pastor's gentle words were projected on a loudspeaker from the chapel, so I could hear everything including the hymns. She had a very pleasant voice, and it really added a nice touch even though I didn't know the woman being laid to rest. 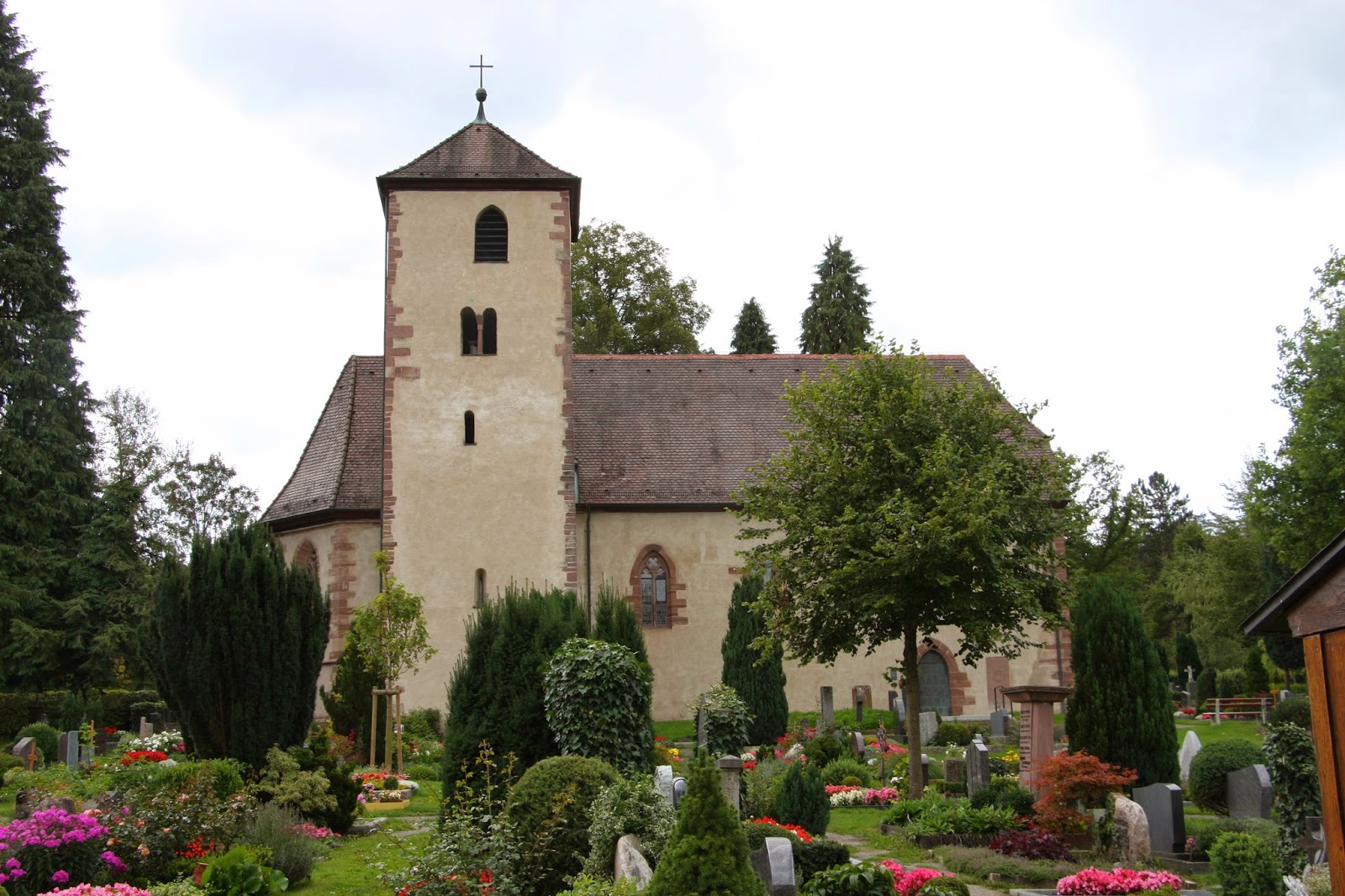 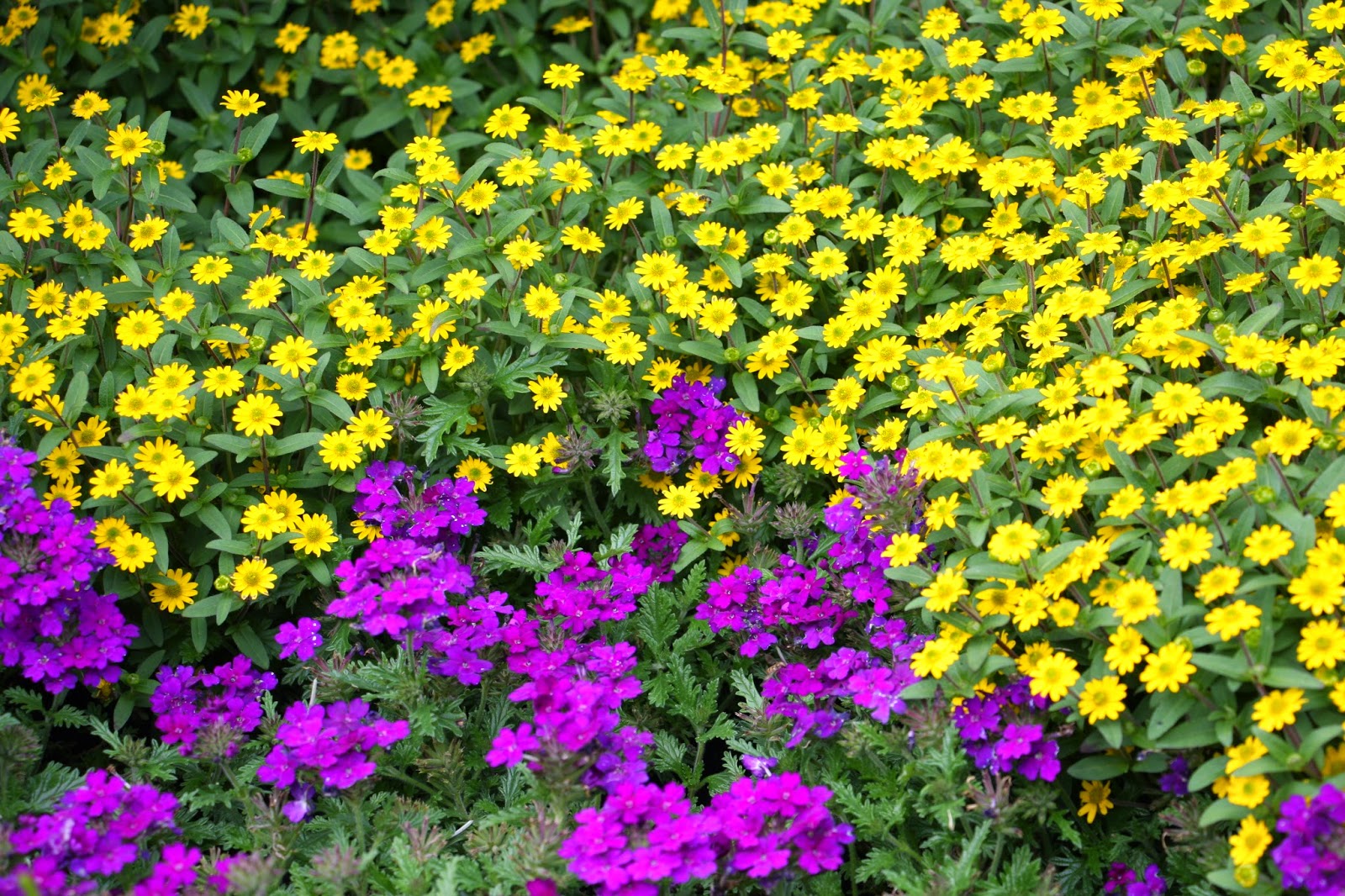 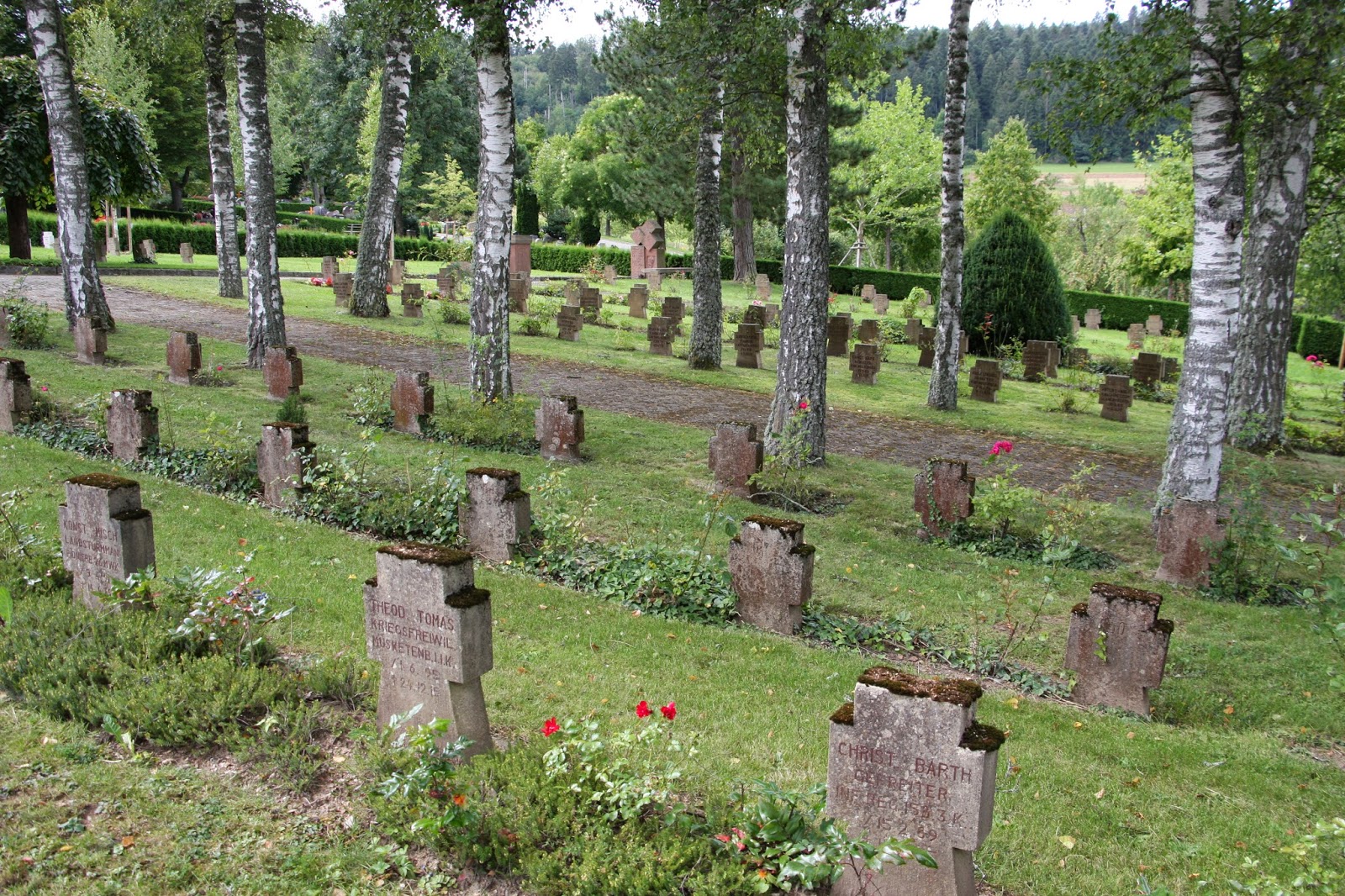 These uniform gravestones are for soldiers from Nagold who died during World War I. This was clear from the death dates on the stones.

In the background beyond the path the same shaped stones are for soldiers who died during World War II. 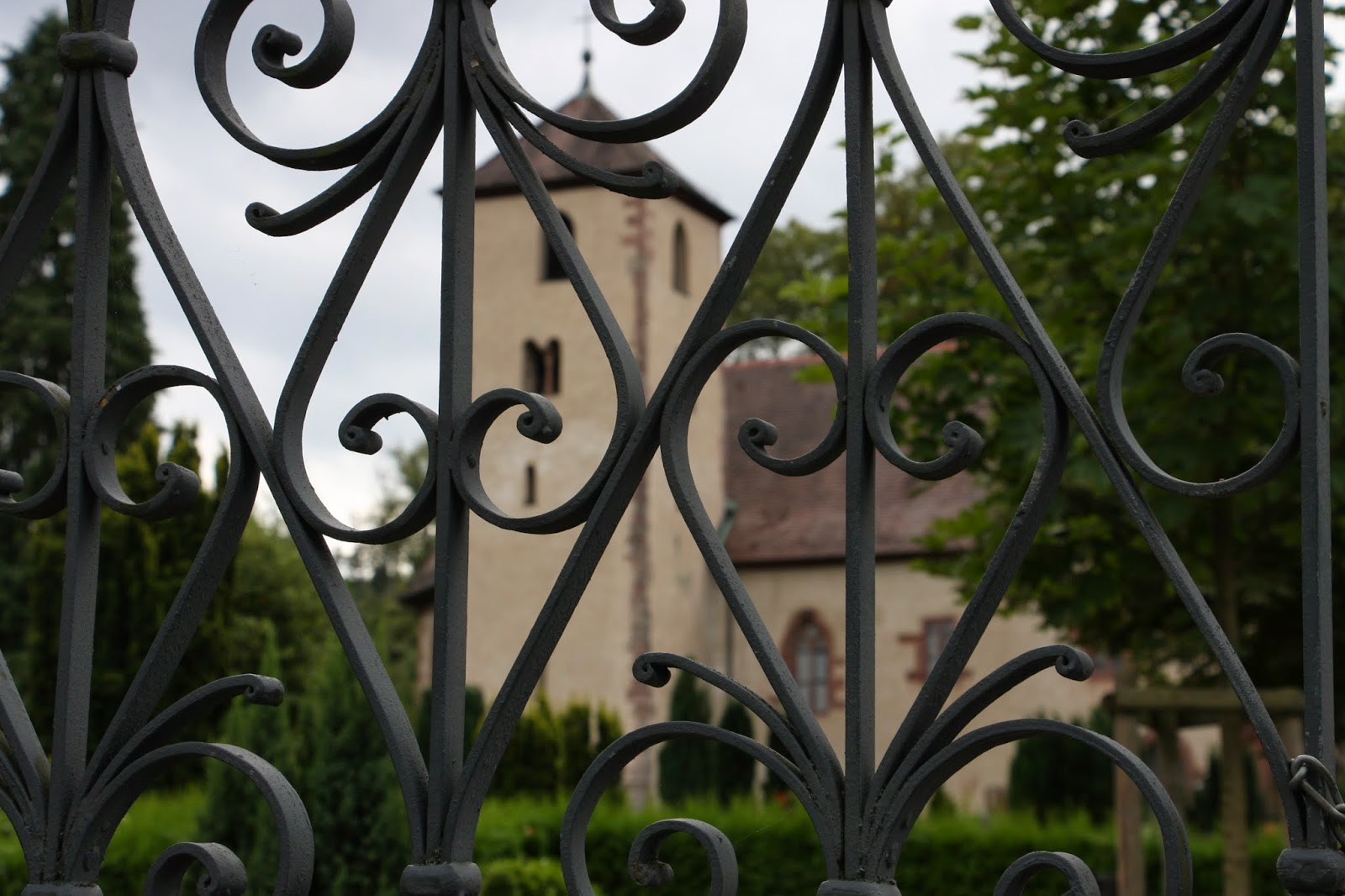 I am so glad I went to Nagold today. I am looking forward to reading more about its history and returning with visitors who want to see a beautiful little German town that is not touristy. It's a pity that there isn't much - if any - information about the town in English - perhaps there's a job for me there!
Posted by Ami im Schwabenland at 22:02