At of the beginning of September our Falkner-mentor’s Harris hawk, Hekate, was through enough of the molt to start hunting crows. She is 4 years old and this is her 5th season. Her first season was the hunting season after she was hatched, before she was a full year old. In that first season the Beizvogel is a bit clumsy, but she gets her first taste of hunting the prey/quarry she will later focus on. 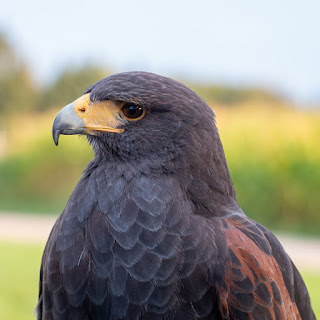 Notice: The photos I will post here are not gory or gruesome, but some will show a bird of prey eating meat – prepared by the falconer or the quarry it has killed. Sort of like what your cat drags in from the yard if it's allowed to go out.

This blog post will be published tomorrow in German.

I have lost count of the number of times I have been out with Hekate and her Falknerin (2-3 times per week), but it has been an incredible experience every time! I am sometimes the driver transporting us between the various hunting grounds, and I have also had the absolute privilege of launching Hekate at the crows we’ve spied. In fact the first two times she flew from my Handschuh (falconer’s glove), she caught a crow each! That was my first feeling of “Jagdfieber” – not the “thrill of the kill,” as it is inadequately translated into English, but an overwhelming sense of emotion and accomplishment – even though it was Hekate’s accomplishment! Yes, we work as a team, and she might not get the crow because of a mistake I make, but the hard work of actually grabbing the crow with her talons and hanging on to it is hers.

The falconer’s job, after launching the Beizvogel toward the crows, is to assist or retrieve the bird. If Hekate got her crow, the falconer has to dash to where she is sitting on her prey and finish the job since the rather shocked crow is at this point only “mostly dead” (thank you, Miracle Max). At the start of the season the Beizvogel gets to pluck and eat as much of the crow as she wants to. That is her reward for a job well done. Later on she can be distracted by a smaller snack and can be lifted off the crow (she forgets about the large tasty crow while swallowing the snack) so she is ready to hunt again.

If Hekate did not get the crow, the falconer calls her back with a tidbit on the glove. Sometimes the tidbit (a small piece of meat) isn’t quite enticing enough, so the falconer pulls out the irresistible day-old chick from her pocket and lays it temptingly on the glove or tosses it in the air a few times (to be stuffed back in the pocket when Hekate is on her way to the glove). Hekate sees this from whichever tree she has landed in even if I cannot see her. Of course we falconers hope Hekate will be successful and get her crow, but - and I cannot emphasize this enough – it is one of the coolest things ever when this beautiful bird of prey chooses to return to my glove from some obliging tree in the distance.

Hekate clearly loves to hunt. While we falconers are searching for the crows, she isn’t just sitting there on the glove snoozing. With her hawk-eyes she can see farther and better than we can, and she stretches her neck as high as it goes to see over obstacles and cranes her neck to look around a tree or a corn field. After a Fehlflug (in which she missed the crow) she sits back on the glove feeling perhaps a bit cheated (“I thought that was a tasty chick on your glove!”), but once she waggles her tail and fluffs herself up, we know she’s ready again.

I thought it was cool enough going hawking with one bird. Then we met Nina and her Harris hawk tiercel (male), Aik. He’s a half-brother to Hekate, younger and less experienced. The first time I was with them Nina launched Aik at several crows but he was clearly not really committed. Then I took him on my glove so he could watch Hekate hunt a few times, and after cawing with jealousy at her two crows, Nina sent him out again. After that he flew well and nearly got the crow each time, not giving up so quickly. On his next time out, Aik got his first crow and was allowed to eat his fill. Good bird!

We have also gone hawking with Ben and Ayla, a bird he is working with while her falconer, Mina, is recovering from an illness. Mina is the one who connected me with Hekate and her falconer! I'd met Mina through a Facebook falconry group when I asked her about the company who built her aviary. And although I have not yet met Mina personally, I've twice spent time with her Harris hawk!

Where do we go hawking? Despite the clever crows and magpies being pests that most people - especially farmers - are happy to be rid of, we can't just hunt anywhere we like. Hekate has permission to hunt crows and the occasional goose, pigeon or magpie in several hunting grounds in the Rhine valley, near Stuttgart, and "up here," not far from where she lives. We need this written permission along with our Falknerjagdscheine (falconry licenses) to prove to an authority who might question us that we have permission from the hunter-tenant to hunt there with the bird.

When the hawking is finished for the day, we return Hekate to her aviary and she gets a juicy and feathery or furry reward for her efforts and/or success. Her body language and side-eye shows she doesn't like to share. Just after I took this picture she dropped her wings down to cover her prize in case I wanted some for myself. 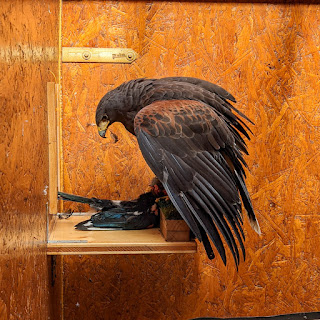 What do we do with the crows? They are not just tossed away, they are food for the Harris hawks now and during the molt! We "field dress" them, cut out the breasts, which Hekate's falconer assures me can be delicious if cooked right, portion the remaining wings, legs, tail, head and breast bone and freeze them for when they're needed.

The wings can be used to make training lures, and I have 2 pairs of wings drying out in our basement for this purpose. After thawing one can also be given to Hekate when she needs a little something to play with and nibble on, since she spends a fair amount of time plucking it before getting to the meat. The Stoß (tail) can be used for a smaller lure. Raptors need bones as well for calcium, to keep their digestive system functioning normally and to help file their beak. By feeding Hekate parts of the crow, her falconer is simulating how she would be caring for herself in the wild.

Although I wasn't certain a year ago as our falconer class was about to start which direction exactly I wanted to take with falconry, I certainly know now. Crow-hawking with Harris hawks is so incredibly fascinating and invigorating! I have to get up early every few days - usually between 5:00-6:00 - which I do gladly. I look forward to every hawking adventure!

I am also looking forward to training our own bird next year, with all the challenges that will bring, and eventually going out hawking with Hekate, her falconer and others. I've made contact with Hekate's breeder, our application for the building permit for the mews is at the Bauamt (building authority), and we've just bought a Geländewagen (a Suzuki Jimny) that our bird's transport box will fit into.

There will be much to report!

Posted by Ami im Schwabenland at 13:22