Notice: No animals were harmed during the activities leading to these blog posts. The only thing that suffered during this weekend was M’s ego, and to learn why, stay tuned.

In my previous post I described what I experienced during my first guided Ansitz. This was M’s experience from that same morning.

The morning of our first hunt M went off with the Jagdmeister and leader of the hunting school, Herr Seibt. They were headed to a Hochsitz that was not far off the road on the edge of a large clearing. Herr Seibt didn’t bring a gun with him, apparently having enough confidence in M’s shooting ability that he wouldn’t need to clean up after him.

They reached the Hochsitz and M followed Herr Seibt up the ladder to a little porch. Herr Seibt opened the door and with flashlights they saw an enormous hornet nest in the corner. Herr Seibt indicated that it was late enough in the year and cold enough that it would be empty. The Jagdaufseher or Jagdpächter (hunter-tennant) removes those in the winter. But then Herr Seibt bumped the nest and the hum-buzzing began. The very-not-absent hornets vacated their nest rather fluidly as Herr Seibt uttered “Oh shit! Schnell, weg hier!!” and they fled down the ladder in a rather hasty and as-orderly-as possible fashion.

After recomposing themselves and straightening their jackets and M’s gun, Herr Seibt said, “So, dann…gehen wir pirschen!” (“So, uh, let’s do some stalking.”) They stalked through the forest to another Hochsitz where they spent the morning. They did not see any Wild, though.

Funnily, when Berthold and I returned to the cars and called the others to tell them we were waiting, it took quite a while for them to get to us. At one point Berthold said to me, “I wonder what’s up. They’re not at all far away and should have been here by now.”

It was the hornets! It took longer for them to return to our meeting point because they’d had to abandon the original planned Hochsitz and choose another one that was farther away.

I am very glad they didn’t get attacked (Herr Seibt closed the door fast enough and M told me hornets aren’t as aggressive as wasps even if they don’t appreciate being awakened by someone banging against their nest in the wee hours of the morning), but quite disappointed M didn’t get a photo for this blog post. 😉

But no, this is not the story explaining why M’s ego was damaged. You’ll have to keep reading for that story. 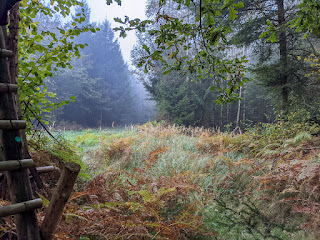 In case you missed it:
Saarland Hunting Weekend, Part 1