On Saturday morning we had our third Ansitz, but the hunter who was supposed to accompany M had cancelled on short notice. Berthold asked M if he would be comfortable going alone, and he agreed. I suspect Berthold knew there was no way I would or should go alone, and after he showed M to his Hochsitz, he and I went to our new one.

We waited for the light to improve and the sun to come up, but ultimately we saw nothing. Berthold kept saying this is extremely unusual, also that we heard no shots from elsewhere in the neighboring Reviere (hunting grounds).

We’d agreed to meet M again around 9:00 a.m. if we didn’t have a reason to meet before then, and when M came down the road did he have a story to tell!

Berthold asked him, “Na?” (German for pretty much anything) and M said, “I had a beautiful Schmalreh in my sights! THREE times she gave me a chance at her, standing still, standing ‘breit’ (perfectly sideways), grazing calmly.” But we knew he didn’t shoot because we didn’t hear it, so what happened?

This is M’s view from his Saturday morning Hochsitz: 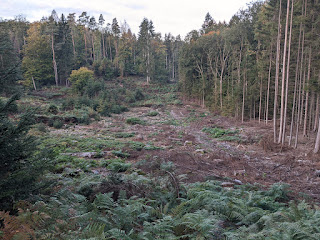 First a fox appeared from the bottom of the ravine, just trotting along up the hill toward him without a care in the world. She passed M’s Hochsitz, stopped so M could get a good look at her, and he said she looked really fluffy and healthy. She looked up seemingly right at him, and then dashed off into the brush.

Another fox popped out of the cover at the bottom of the ravine but stayed down there. Foxes were open for us, but Berthold had said we shouldn’t bother, rather saving our energy and ammo for a deer or wild boar.

Around 8:15 a Reh (roe deer) emerged cautiously from the trees on the right side of the ravine about 50 meters down. At first M only saw the ears, but then it stepped past the shrubby patch and M confirmed that it was definitely a Reh. This is the time to begin Ansprechen – a hunter has to be very certain about what he’s shooting at and that the foreground and background is clear. It was alone, it was smallish and its face looked youthful, M didn’t see any Knöpfe (start of antler nubbers), so he surmised that it was a young Reh. All deer are open in October, so even if it were a doe, as long as she doesn’t have a Kitz (fawn) with her, we could shoot.

The deer finished nibbling at the first patch of shrubs and sauntered across M’s field of vision to a second bush. Again it stopped, standing perfectly sideways as if offering M its “Blatt” (heart, lungs – the spot you want to hit the deer to kill it quickly). He readied his rifle, went into Anschlag (took aim), looked through his scope and saw the deer completely relaxed, head up, seeming to look straight at him. At this point the doubts started in M’s mind. If he’d had an experienced hunter with him to encourage him, he probably would have shot then and well. But once the self-doubt starts, it’s kind of hard to overcome. The deer took a step forward and changed its angle slightly, and M waited.

The deer moved on to the third patch of noms, which was now about 70 meters from the Hochsitz, and carried on munching. She spent her merry time here, standing at an angle M said couldn’t have been better, and M decided, “IF, then now.” He took aim again through his scope.

And then the shaking started.

It was his right (trigger) hand that started shaking first, and so badly that he couldn’t stay on target anymore the scope for all the jumping around it was doing. Having not experienced this before, he didn’t know how to counter it. But he knew he couldn’t shoot if he couldn’t see his target clearly. This has been drilled into our heads and souls through classes and discussions: When in doubt, leave your finger straight (don't shoot).

Not long after this the deer wandered leisurely off into the trees to enjoy the rest of its day and its life.

We later learned the term “Jagdfieber.” The insufficient English translation is “the thrill of the hunt/kill,” but that’s not what it is. To me that sounds like the hunter wants nothing more than to kill or the elation he feels after killing something. Jagdfieber is rather the excitement and tension mixed with nervousness  that comes during the hunt in general, directly before the shot, and/or directly after the shot. The Fieber (fever) part of it seems to refer to your brain not functioning quite normally, and certainly not calmly and rationally. If you understand German, this is an excellent article about Jagdfieber, what it is and how to deal with it.

M knows what it feels like now. That understanding is still before me, but I’m hoping his experience will help me. It probably won’t.

Although M said the only thing that took a hit this weekend was his ego, every hunter we've talked to since - including Berthold - has said this is totally normal and nothing to feel bad about.

Back to the Schießstand we go.