Not long after I moved to Germany during a visit in Wisconsin I was introduced to Dr. Hans-Udo Jüttner, who has since become a friend. He was on the brink of a project for which he needed some assistance, namely transcribing the nearly 400-page hand-written Tagebuch (diary) he wrote in 1962-1963 while working with Dr. Albert Schweitzer in his hospital in Lambarene, Gabon, Africa. He'd written this Tagebuch mainly in German, with occasional English and some French, French being the official language of the country. Gabon was occupied by France in 1885, became a French territory in 1910, and gained its independence in 1960, just two years before Udo arrived there.

Udo needed his Tagebuch in electronic form because he wanted to see about getting parts of it published.

Through my years of teaching in Wisconsin I had come across many unique styles of handwriting, which I sometimes had to decipher in order to grade homework and tests. I expected the English and German would be no problem, but I do not know a word of French! Udo gave me a copy of the first pages of his Tagebuch, and on the way home in the airplane, I had a look.

What an honor and a privilege to be trusted with this man's personal diary of a time and place I knew very little about. It did not take me long to decide I would like very much to be part of this project.

I'd heard of Dr. Schweitzer of course, but I did not know much about him. During the next several months while I transcribed the Tagebuch, I also ordered and read some biographies about Dr. Schweitzer and explored the hospital's website. Schweitzer certainly led a fascinating life but was also a controversial figure in some respects, which didn't surprise me by this time.

I finished my part of the project in March of 2014, and I was giddy with excitement to hear from Udo in mid-July 2021 that his book has recently been published! After picking it up at our local bookshop, I opened and started reading it while walking back to my car, not being able to wait until I got home. It is available directly from the German publisher, at this point only in German. 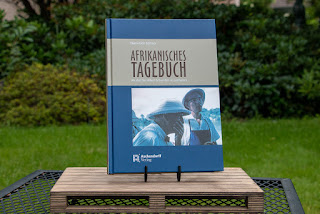 Udo's Tagebuch is a personal look behind the scenes of the work done in Schweitzer's hospital in Lambarene, not only the medical work of the hospital and the leprosy village, but especially the Alltag (everyday life) in a jungle setting. There was, among the responsibilities, the manual work of building and improving the structures, managing the various animals living in the complex, treating the patients and providing for them and their families' food. He also tells of the constant stream of visitors from all over the world arriving daily in the hospital, alone or in large groups - reporters, globetrotters, Nobel Prize winners, tourists, and famous as well as lesser-known donors and admirers. They were all welcome to share the daily meals with Schweitzer and his staff on the banks of the Ogowe river in Lambarene.

The medical care patients received was provided free-of-charge, but those and their family members who were able were required to help out with various tasks and chores around the complex. Udo was in charge of working with and managing these groups of workers for his first three months in Lambarene.

Udo also includes a letter he wrote to his former teacher at the Albert-Schweitzer-Gymnasium in Marl-Hüls, in which he describes life in general at the hospital and the organization and schedule of work days. This wasn't in the original diary I transcribed, and I poured over this like every other part that was new to me: the foreword, the final thoughts, the notes, the photos and captions.

What makes a Tagebuch most enjoyable are the personal observations and thoughts of the writer. Udo shares his joys and satisfaction of projects well done, frustrations, questions, hopes, and feelings about Dr. Schweitzer, who was a role model for Udo, though not infallible. He also explains how he came to spend those 16 months in Lambarene and how reading Schweitzer's biography when he was a teenager inspired him to pursue a medical career.

Udo has long been an active hobby-photographer, and the photos in the book were taken by or of him. Dr. Schweitzer did not like to pose for photos, so those of him tend to be candid shots, which I find wonderfully authentic. It was especially nice for me to see photographs of my friend back when he was the age my son is now!

I feel truly fortunate to have been introduced to Udo and invited to participate in this transcription project! He did need to edit and cut parts because the original would have been too long for most readers (the final version is 172 pages), and I think I'm glad I wasn't involved in that part because I would have had a hard time cutting anything!

One example of this involves birthdays. Dr. Schweitzer made the birthdays of his co-workers special by celebrating them at the evening meal with a speech, songs, gifts, togetherness and Gemütlichkeit. While transcribing, each time I came to the point where Udo said it was someone's birthday, I found myself thinking, "Oh good! What is he going to say this time?!" But these birthday celebrations weren't important for the purpose of Udo's book, and therefore it's understandable that he and his editor decided to cut most of them. The reader still gets a taste of how birthdays were celebrated in Lambarene when Udo briefly describes his own birthday on...well, read the Tagebuch and find out for yourself! 😊

I was truly sorry when I came to the end of his Tagebuch and wished there were a sequel. There is, of course, just not in published diary form. After his 16 months in Lambarene, Udo returned to Germany but then spent five years at the Mayo Clinic in the U.S. for his medical training in radiology, met his dear wife Joan, and after a brief return to Germany decided to pursue his medical career in the U.S. His extensive travel adventures include climbing Mt. Kilimanjaro for his 60th birthday, trekking to the Mt. Everest base camp when he turned 70, and returning to Nepal for his 80th birthday to the Rukmani Secondary School he helped found and continues to support in a remote Himalayan village. My dad (74 at the time) joined him on this trip, which also included a trek in the Himalayas in the direction of Gokyo-Ri.

I think when most of us come into the autumn years of our life, we want to look back to a life well lived. It's not the hours spent at work that come back to us for reflection, but the adventures we pursued, the people we encountered who made a lasting impression on us, the lives we hope we impacted, and the good we did. Albert Schweitzer's lifelong philosophy was "Ehrfurcht vor dem Leben" (reverence for life), and to me that encourages us to live our best life and do what we can to make this a better world despite our imperfections. I hope Udo knows the depth of the impression he has made on me, how much I have learned from him and from reading about his adventures and his time in Lambarene, and that I am glad to call him my friend.

Posted by Ami im Schwabenland at 08:44