Something interesting (to me) happened today. Many expats have complained about Germans’ (and Dutch as well as some other Europeans’) tendency to “mind other people’s business,” that is telling total strangers what they should or should not be doing. A common one in Germany is crossing a street when the Ampelmännchen is red. You’re setting a bad example to children who might see you, so don’t do it. And if you do do it and someone sees you, you’re likely to get scolded. Another one is sitting on cold surfaces (like stone) in the winter because that supposedly causes bladder infections. Now, I’ll admit, when I’ve heard expats tell about experiences like this, I’ve sometimes thought, “Come on, is there something missing from your story? I mean, why would a total stranger publicly scold you like a child for doing something that doesn't affect him or her?” Ok, a stranger definitely did tell me I shouldn’t be sitting on the cold steps of M’s office one winter’s day while I was waiting for him, but I'm sure she was just considering my health.

This (someone minding my business) happened to me today. What on earth was I doing wrong? I was taking a walk with earphones in, listening to music.

Read on for the rest of the story.

One of my semi-regular walks is past the edge of our village, across some fields, through a forest to the neighboring village where there is a fabulous bakery. I always listening to music until I get to the forest, and while in the forest I ditch my music in favor of the symphony of nature. Then I usually listen to music again rather than the man-made noises of the village. On the way back, same thing – no earphones in the woods, but when I get to the field, I put them back in again.

This morning as I rounded a corner to head along the fields, I noticed a father and son standing near the last house (farm) on the way out of the village, talking to the farmer. Not wanting to interrupt their conversation, I gave a nod and added a pleasant expression (not quite a smile). The farmer half-shouted at me, “Ja, gude Morga!” I hesitated and said, "Morgen!" while taking out my earphones, and he said, “Schmeiß das Ding weg!” (“Get rid of that thing!”)

Now, I could have felt offended, I could have ignored him, I could have told him he should mind his own business, or I could have said at age 52 I’ll damn well decide for myself whether I’m going to listen to music or not while I'm walking alone. But I didn’t do any of those things, because on some level I agree with him. I think it’s a pity that so many people go through their days with things stuck in their ears listening to everything but the sounds of where they are: Parents walking babies in strollers talking on the phone to someone else rather than interacting with their child, people walking their dogs paying more attention to their smartphones than their pet, people alone on trains or buses closing themselves off from the rest of the world by listening to music so loud other people in the compartment have to hear it, too, at least the bass drum beat. Those of you living in the city, I can’t blame you for trying to dull the cacophonous roar that is big city noise – I mean those of us who live where it’s relatively quiet.

Back to Bauer Mecke. So how did I respond? Rather than being annoyed or crabbing back in English, I said in German, “As soon as I’m in the forest, the earphones are gone.” He crossed his arms and stomped, and said, “Well, good.” Then I think he started to complain to the father about people who constantly wear earphones, but his words faded quickly enough as I trekked on and stuck the earphones back in.

Another common expat gripe is that Germans are rude, or at least not friendly. By US-American standards what he did was rude. You shouldn’t go around telling strangers how they should spend their time. I could have been listening to a book on tape, hearing questions and answers for the Jägerprüfung, or learning German. I have all those things on my very old-fashioned MP3 player, and listening to any of that gives me a break from my tinnitus. I was actually listening to Disney’s “Tarzan” in German, and I assure you listening to and learning music in a foreign language helps you learn it, including grammar! 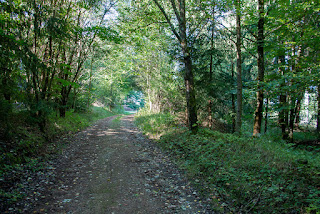 I don't share many expat complaints about Germans (and I don't know any Dutch people). I'm just chalking this incident up to "Yeah, it's happened to me, too." I just find it interesting that I've seen this complaint quite a few times in expat groups, have questioned it (seriously, why would he make her business his when no one's life, safety, or property is in danger?), and then it happens to me. That serves as a reminder to me not to question or doubt others' experiences. 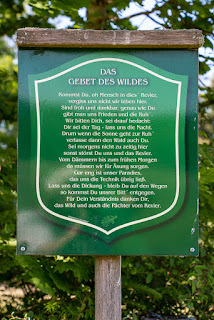 P.S. I was going to mention the German quirk involving drafts, but a British blogger in Bavaria I follow just wrote about this and saved me the time. Here's the link.

Posted by Ami im Schwabenland at 14:40