Last weekend M and I drove to the Landesgartenschau in Überlingen on Lake Constance, not because we like flowers all that much, and certainly not because we like crowds. We are members of the VDF-BW (Verband Deutscher Falkner –Baden-Württemberg) and although we don’t have our own bird yet, we offered to serve as unofficial photographers for the event.

The Verband had 10 or so Falknerinnen and Falkner at their booth plus six raptors and two owls. There were four Harris Hawks (amerikanische Wüstenbussarde), two Saker falcons, a barn owl (Schleiereule) and a snowy owl (Schneeeule). The Falkner answered questions posed by curious and captivated onlookers who wanted to know what kind of birds these were, how long their lifespan is, how much the birds weigh, what it involves to become a Falkner, and what the birds and owls eat. The children were especially curious about the Schneeeule, who looked like Harry Potter’s Hedwig (who, by the way, was a male, just like Hedwig). Several lucky children were allowed to hold a Harris Hawk on a borrowed Falknerhandschuh (falconer’s glove) and their faces beamed like at Christmastime. 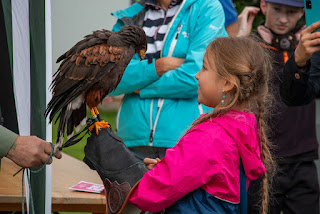 Verbandsvorsitzender Joachim Ehni and three additional members, each with an owl or raptor on the arm, gave a presentation on a nearby stage three times that day, telling the attentive audience about the raptors and owls, sharing some stories and explaining how the Beizjagd (hunting with birds of prey) works. 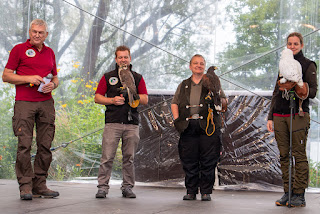 Ehni shared a story about sending one of his young hawks after several crows, when all of a sudden a whole hidden flock took to the skies! The young Greif went for one crow, changed her mind upon seeing the overwhelming number – like a scene from Alfred Hitchcock – and flew straight back into the car! When Ehni got there the hawk looked at him as if to say, “Schließ die Tür, Kumpel, und weg hier! Es ist scheißgefährlich da draußen!“ (“Close the door, Mate, let’s git!! It’s dangerous out there!”)

Wouldn't you love to be able to look behind you by just turning your head? So does every teacher who has ever taught children. Raptors have 14 neck vertebrae compared to our 7, which allows them to turn their heads about 270°.

I’ll let this be a photo-heavy post since that’s what we were there for!


The Verband is grateful for the donations guests put into the collection box. The money is used, for instance, to fund food and medical help for sick or injured wild raptors that are cared for by Verband members.

What questions do you have about falconry or these lovely owls and birds of prey?

Posted by Ami im Schwabenland at 17:14