Since it has been a while, I thought I would post an update of how things in our falconry world are progressing.

We have a new falconer-mentor, who has a lovely Harris Hawk named Hekate. The two of them have been teaching me some of the basics, and while I have a long way to go before I'd feel comfortable with my own hawk, I have been learning a lot! I'm grateful to my first Lehrprinz (with the Habicht/Goshawk), but I don't think that was going well for any of us. I did learn without a doubt that a Habicht is not the right bird for us, at least not yet. The Habicht tends to be a nervous bird, and adding to that my own nervousness...not the right combination. That was important to learn as well.

Before I met my mentor and Hekate, I was not entirely sure what direction I wanted to pursue with falconry. Going for hawk walks, as we've done during falconry afternoons in Scotland and here in Germany and with Ronja the Sakerfalke, definitely. Daily training, surely. Hunting with the bird, maybe but I wasn't sure. Since learning more about the Krähenjagd (crow hunting) I can say that I'm eager to head in that direction and continue working with my mentor and Hekate. 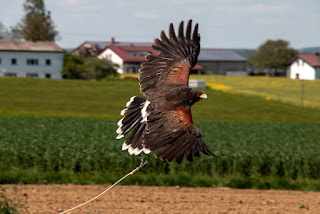 Hekate is in the Mauser (molting) right now, which generally lasts from March into August. This is "down time" for her and her training exercises are limited to very short flights on a Lockschnur (creance) and some exercises in her Voliere. Her Falknerin spends time with her every day and weighs her most days, and she's a very personable bird. M and I have been partial to Harris Hawks ever since meeting Albus in Scotland. They are sociable birds who actually like to spend time with their falconer, unlike the Habicht, who'd rather be left the hell alone.

She has her moods, for sure. Like the day I brought our beautiful new wooden Sprenkel (perch) for her to sit on so I could take a photo and send it to the Drechsler who made it for us for his website. That little experiment started with her giving it the side eye and ended with her hanging upside down from her falconer's glove, clearly saying, "Just kill me now. I'm not sitting on that thing!"

I've also seen her have a bath on a hot day, which looked like the slow-motion birdie version of twerking. Not very elegant, but entirely adorable.

Just like Ronja enjoys her "Baum-to-go" walks, Hekate enjoyed a windy day out for a "hawk walk." Since M and I were both there that day, we got some photos.

Recently  my mentor took me out in her car to demonstrate the kind of driving we do for hunting crows. Holy cats! This will take some practice! Crow hunting is done here from a car. The bird sits on the passenger's glove and everyone keeps a look-out for crows standing in fields not far from the road. At just the right moment, the passenger lowers the window and "throws" the hawk out, and the hawk picks out and attacks a crow. Immediately after the hawk is out, the driver slams on the brakes* and pulls off the road, the passenger jumps out and runs to the hawk to help finish off the crow if necessary or bag it if the hawk has already taken care of it. The hawk returns to the glove, they both return to the car, and it's off again to the next opportunity.

*She has already made sure there's no vehicle behind her and no oncoming truck!

You can't do this on foot because the crows will be long gone before you can get the hawk close enough to be successful. They're smart, too, and learn which cars the falconer and hawk travel in, so it does no good to hunt the same area again too soon. Crows can cause a lot of damage to farmers' crops, so farmers are generally pleased to have an active falconer nearby. 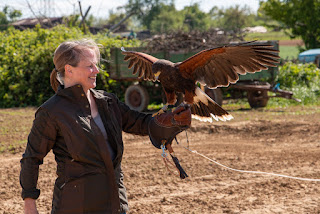 Hekate's favorite nibbly is mice. Even when she's not entirely in the mood to come down from her perch, land on the glove and be weighed, she can generally be tempted do so for a warm and squishy (deceased) mouse. Nomnom.

M and I also visited Ronja and her Mensch together not long ago and had a really nice day! He was able to see why I was really leaning toward wanting a Sakerfalke after spending a few hours with Ronja. We look forward to seeing them again. 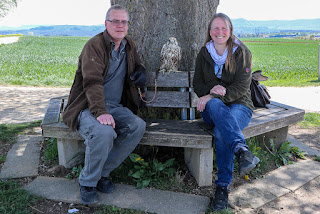 In the mean time I/we continue to work with Hekate and my mentor each week, and we are trying to get the building of the Voliere settled. We need to apply for a Baugenehmigung (building permit), which requires filling out a bunch of documents and providing a drawing of all four sides of the Voliere. That's proving to be an intimidating expense and an enormous pain in the ass.

I am looking forward to crow season and every step of learning leading up to the first time I assist Hekate! In a future post I'll provide some information about Harris Hawks, why we've decided that's the bird for us, and why we want a Terzel (male). I will also be able to provide more information about the Krähenjagd after I've been out a few times. 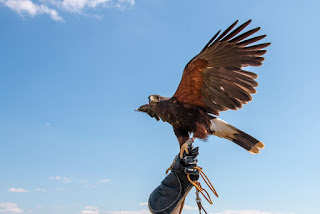 Posted by Ami im Schwabenland at 14:52