When the editor of the local newspaper contacted me a few weeks ago asking if I’d like to write a weekly column about US politics from an expat’s point-of-view, I asked my few Facebook friends if they would do it. One commentor replied that he would consider it if the paper would have articles from both sides (Republican and Democrat) to avoid readers thinking the opinions in the article are what most expats think. I answered that I don't know any expats in Germany who are Republicans. 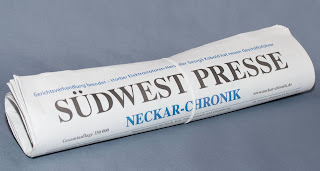 Well, a friend of ours found one. She's a member of "Republicans Abroad" and was an invited guest on the Markus Lanz talk show. She so shocked the host and other guests 45 minutes in (at that moment my jaw dropped so hard I'm lucky it didn't snap off) that he insisted that part of the discussion end because what she’d said was so abysmally below the line of decency that he would not allow that level of discourse to continue. It was clear she had no idea what was objectionable about her statement.

Our friend said that only since watching this can he understand the depth of the division in the US and he had never realized how bad it is. I can verify that the Spaltung in America is indeed this bad between strangers, some friends, and family members, and I really do not see how its citizens can unify and become a cohesive country again. The only thing keeping some semblance of peace is the fact that most Americans do not enjoy talking face-to-face about politics. Keyboard warriors are in abundance, but few are willing to risk actual in-person conversation about anything controversial, especially - but not only - with people whose views differ from their own.

The host told this woman (before she made her most absurd comment) he reproaches her for only one thing: the fact that no matter what topic is brought up, no matter what anyone else on the panel says or asks, she does not even attempt to approach the others or meet them anywhere in the discussion. She shows not the slightest will to acknowledge that the other side might be right or even have a reasonable point. Everyone else is just wrong. She shrugged her shoulders at the more than 200,000 deaths in the US from Covid as a small percentage of people, she blew off so many Americans not having access to affordable health care, she said all men talk like that when asked how, as a woman, she felt about Trump’s “grab ‘em by the pussy” comment, and she said the problem within the black community is that all the fathers have disappeared (no, that was not her most absurd comment). Even at the most outrageous things, she excuses Trump and backs him up rather than even once saying, "Yeah, he didn't handle that very well."  When she had no good excuse for Trump, she employed "Whataboutism," even saying "Look at England..." when the topic was mail-in voting.

This is a well-known talk show. The news occasionally reports on what was said there and I'm actually very surprised I hadn't heard about this particular show since it aired a week ago (M had, however). That woman was presented as representative of Trump supporters and Republicans, and it is no wonder if many Germans find such people batshit crazy.

In contrast to her, when the German guests spoke about their topics (the Covid situation, right-wing extremism, a book written by one of the guests, and anti-Semitism, for instance), they were able to also be critical, meaning show critical thinking, about Germany and the Western world. They sat in such contrast to that American woman, coming across as people who have some depth and have thought deeply about all the topics at hand, including the shit show in the US.

I watched this because I want to know what kind of Americans Germans are seeing and because I converse often with this friend of ours about politics. There's one other American I've seen on talk shows a few times who is a Trump supporter, and he also has parroted the same things Trump wants his supporters to believe. I have yet to see an American liberal/Democrat on a German talk show, in the news, or in the newspaper. When the evening news reports about America, they show the rapturous crowds cheering Trump, maskless fans being interviewed about how great Trump has been for the country, the lines of voters waiting 10 hours to be able to cast their votes, etc. The only mention I've heard of Biden other than clips from the debates is that he is leading in most polls. But the people who support Biden don't make it into the German news. I think we're probably not interesting enough.

By the way, do not believe the polls and do not become complacent.

...but vote only once, either by mail or in person. Do not do both, as #45 advised his fans at a gathering in September.

My first column (in German) was put in front of the paywall and the topic is how I go about absentee voting as an expat from Wisconsin.

Posted by Ami im Schwabenland at 09:21