The short version of this post is: I passed my Falknerprüfung and am now a Jungfalknerin!!

This has been one hell of a journey, and it's really only just beginning.

In September 2017 M and I saw our first falconry show at Burg Hohenzollern and thought it was really cool to see hawks and falcons soaring free and returning to the falconer's glove. A month later we went to another one at another Burg and were equally impressed. They had owls as well, and having adopted a love of owls from my Schwiegermutter, we snapped many photos of them. Our third falconry show was at Burg Hohen Neuffen, and that one was our favorite. Music, costumes, big owls, little owls, falcons, hawks, a golden eagle...

The people working with the birds of prey and owls looked like normal people, and I started seriously wondering what I would have to do to work with these birds. This would be my first serious taste of what German bureaucracy has to offer.

Germany: "How do you feel about gutting deer?"

Germany: "Right. How many different types of plants can you identify by fruit, flower, leaf or seed?"

Me: "No, seriously. BIRDS. Hawks and falcons."

Germany: "Uh-huh. Internal organs of a wild boar? Symptoms of illnesses you need to look out for in wild animals?"

Me: "Come on, my German is not this bad. Why do you not understand me?"

Germany: "Nope, dog kennel. In some states if you want to hunt with a bird, you need a dog."

By November 2018 I had spoken to some people and learned that I would indeed have to become a hunter first (earn my Jagdschein, or German hunting license), and then I could pursue falconry. I could do the hunting class (170+ hours studying 5 different subjects in comparison to the 10 hours of hunter safety required in Wisconsin) without the shooting bit, but it was recommended to me by two falconers to just go for the full Monty and learn to shoot as well.

In early January 2019 I visited the Landesjagdschule, and a short time later I was registered for the summer course. Those were a grueling three weeks that included many hours of studying at home, and M had to help me so much with the language and understanding guns and German hunting laws that he eventually went for his hunting license as well at a school in Saarland. I delayed my test until early March 2020 to give me the extra study time and passed two of the three parts (written and oral-practical). For the gun handling and shooting I needed more practice and with the help of our great trainers in Stuttgart, I passed that part at the end of July. With that, I became a Jungjägerin! M had passed his whole test in one try in June, so he had become a Jungjäger before I did. On to falconry...

We both signed up for the falconry class at the Jagdschule where M had taken his hunting class. This was a brutal 6 days of class! Eight to nine hours of classroom work followed by 3 hours of reviewing in the evenings every day for 5 days, one day at a Falknerei handling birds and watching a Habicht (Goshawk) hunt crows, and on the seventh day was the test. 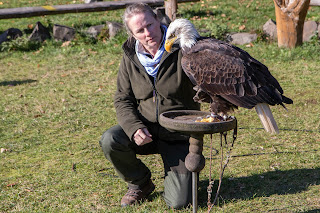 At the Falknerei we all practiced tying the Falknerknoten (falconer's knot) with our faces centimeters away from the Weißkopfseeadler's enormous beak, we had Harris Hawks on our gloves, and we flew the Weißkopfseeadler between us a few times. At the end they flew for us a very annoyed Sperbergeier (vulture), answered the rest of our questions, and let us go for our final review. 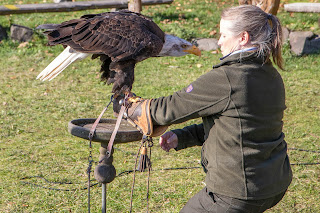 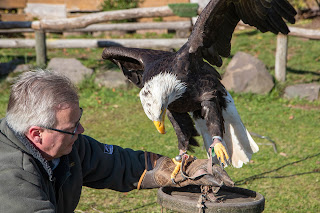 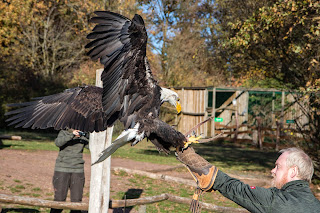 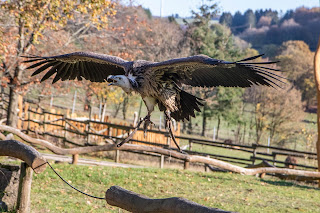 The Falknerprüfung consists of four subject areas (law, ornithology, practice of falconry, and care of birds, hunting dogs and ferrets) and is oral-practical, which ultimately is four separate interviews where we are asked questions or given tasks such as tying a secure falconer's knot with only one hand. I did very well in two of the subjects: law and ornithology. In the other two I was not impressive, but good enough to not fail. The tough thing is that the test administrators are experts in their fields but not teachers, and we'd been warned that sometimes their questions are phrased rather oddly to the point that the student doesn't get what they're going for.

During the waiting time, as the 20 of us aspiring falconers waited to hear our fate, we all paced around nervously. Businessmen and -women, 3 foreigners, a zookeeper's assistant, teachers...most well over 30 years old were all shitting ourselves wondering if we'd performed well enough. In the end we had.

In case this all sounds kind of fun and cool, I can assure you it is the most difficult thing I have ever done. As I've written here before, raising my kids was easier. I did that in my native language and there was no test in the end. College finals? Pffst. You read and learn for one semester and take a test. I have never experienced anything like this - as well as the feeling of accomplishment afterwards, which is only just now sinking in.

Now that the theory portion is behind us, we will take some time to gain practical experience and learn from a real falconer (our Lehrprinz!) before we decide about getting a bird of our own. We will eventually build an aviary (according to the dimensions required by the animal protection law of course!) and make or buy the equipment one needs to have a bird of prey.

For now I'm going to enjoy a few weeks of not having to study, learn and review things like the parts of an egg and a feather, list of new- and old world vultures, weights, wingspans and breeding patterns of birds, which types of birds hunt what type of prey, and relevant parts of 15 different German laws and ordinances.

It's been quite a ride so far!
Posted by Ami im Schwabenland at 17:13