I've often written about how much I like Sundays in Germany because stores are closed and in Swabia, at least, there's a Sonntagsruhe, meaning you basically need to be quiet. Sunday is a day of rest and for family.

So what on earth can you do if not yardwork or shopping? 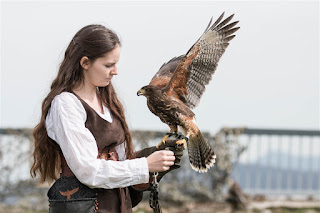 One very enjoyable outing is driving to a Burg (castle or fortress), walking up to it - most fortresses were built on the tops of hills - exploring and learning about the fortress's and area's history. If you choose wisely, you might even be treated to a Falconry show!

Burg Hohen Neuffen is a 50-minute drive from Esslingen. It's actually a Burgruine (ruins), which I find more interesting than fancy palaces. The walk from the parking area up to the castle takes probably 25 minutes for normal people. M and I were on a mission to photograph Greifvögel and Eulen, so we overtook families with small children, grandchildren and their dad pushing Oma up the hill in a wheelchair, and one man wearing shockingly green trousers, and made it in 15 minutes. It's not strenuous if you pace yourself. There's a restaurant at the top and plenty of places to sit and recover.
We'd explored the Burg on previous visits, so this time we focused on the falcon show. Falkner Wolfgang Weller brings his beautiful birds here every Sunday and holiday between Easter and the end of November, and the shows are at 12:00, 14:00, and 16:00. Adult admission is €5, and for a donation after the show you can hold an owl, hawk, falcon, or Golden Eagle on your arm. Donations support the care of the birds and owls as well as the rehabilitation of injured birds that are nursed back to health and re-released into the wild - an important part of the world of Falknerei!

The show begins with dramatic music and Falkner Weller announces to the crowd the purpose of the show: to demonstrate die Kunst mit Vögeln zu jagen (the art of hunting with birds). His assistants have the Wüstenbussarde (Harris Hawks) on their arms, and at his cue they let them loose one by one until all three or four are in the air. They fly right over the tops of the spectators' heads, up to the walls of the fortress, back to the glove, grab a treat and repeat. So impressive! You need to be a better photographer than I am to get great photos, and besides, I wanted to watch the show!

I cannot tell you how impressive and graceful these birds are. Before the show they rest tethered with Langfessel to their Sprenkel or Block, and sometimes they flutter around or squawk looking impatient to get going while guests gawk at and photograph them.

If you're thinking they shouldn't be tied but rather allowed to fly free as birds love to do, don't worry. We've learned that birds and owls in the wild fly for only three reasons, and "for fun" isn't one of them.  Either they need to hunt, or defend their territory, or find a mate. That's it. And why do the birds return to the Falkner after being set free? Because they know a meal or snack provided by the Falkner is a sure thing, but hunting is hard work and often not successful. They are free when the Falkner takes them out, and they choose to come back.
Ketan the Steinadler (Golden Eagle) has a Flugverbot (flight ban) at Hohen Neuffen because the Burg is in the Biosphärengebiet Schwäbische Alb (Biosphere Reserve) and Steinadler are not native to the area. Therefore if this enormous eagle were flying about, he might very well scare off birds that are native to the area, which wouldn't do. Since he doesn't need to hunt, defend the area, or find a mate, he gets shown off - and if you're strong enough you can hold him on your arm after the show! - but otherwise has a siesta at the Burg while his companions have to work.

After the Harris Hawks are back on their Sprenkel, Falkner Weller invites a young volunteer to join him as a junior Falkner, and he explains some of the equipment a Falkner needs: Ledertasche, Federspiel, Langfesseln, Bellen, and the Falknerhandschuh, worn on the left hand/arm (because in traditional Falknerei the Falkner rode a horse holding the reins in his right hand, so the bird was always on the left). Incidentally, the right hand is needed today not for holding the reins, but rather for pulling pieces of Eintagskücken out of the Ledertasche to entice the birds back to the glove. That Sunday the brave volunteer was "Prinz" Othgar*, who was then invited to sit on the king's chair in the middle of the "stage" for the rest of the show.
*name changed 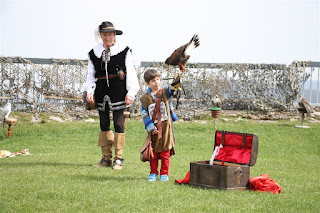 Falkner Weller also showed us how he trains with the Federspiel - a feathered lure with fresh meat attached to a long rope. They released a Lannerfalke, a Gerfalke, and a Wanderfalke (Peregrine Falcon), and the last two soared and swooped dramatically while the Falkner swung the Federspiel. They kept swooping and diving at it until he let them catch it one at a time to bring them in. Clearly this was hard work for the Falkner as well - he was huffing and puffing afterwards! 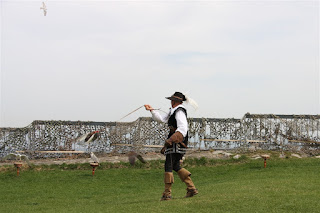 Here is another trailer for his Falknerspektakel showing the Federspiel. 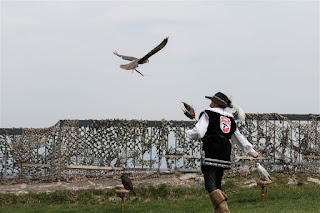 Then he pointed out that Herzelinde the Lannerfalke was the smartest of them - she had flown straight up to the top of a castle wall and just sat there watching the other two falcons burn themselves out. 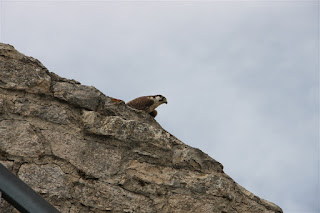 She's the oldest and most experienced of them, and she's learned to sit back while the young pups...er, falcons...do the hard work. When they were spent, Falkner Weller coaxed her down from the wall and she swooped impressively at the Federspiel a few times, always returning to the wall as if to ask, "Oh, come on. Must I?" In the end she caught it in the air with a tremendous thud, brought it to the ground, and was rewarded with the chunk of meat attached to it. 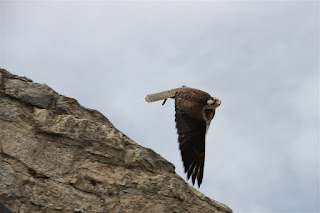 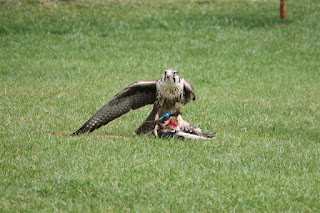 Believe it or not, I could go on! Falkner Weller told funny anecdotes, gave us a lot of information, and told us what not to do if we find an injured Greifvogel in the wild. As with the other Falkner shows we've seen, it is obvious how passionate the Falkner and their assistants are about the birds and owls. Falknerei is serious and hard work; it is not just a hobby. I think we are very fortunate to have the opportunity to see these majestic birds and owls up close and learn about them.

Posted by Ami im Schwabenland at 12:14