I have written before about how much I love bookshops and how important I think it is to shop locally rather than always using the convenience of Amazon. This week I took the bus to Nagold to have coffee with an English teacher friend of mine who had just returned from the US with students, and since I had an hour to kill before my bus back, I treated myself to a wee peek in the bookstore. I left the store with four new books and had finished one before the afternoon was over. 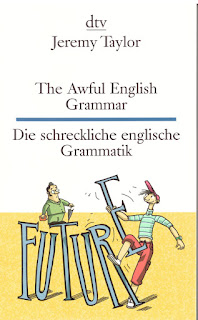 The Awful English Grammar/Die schreckliche englische Grammatik, by Jeremy Taylor, is a bilingual book with the English text on the left-hand pages and the German text on the right. I added the book to Goodreads, and you can read my description and review of it there. The book is a conversation between a British guy (Barry Buggins) who wants to teach English in Germany but realizes he doesn't know how to teach English despite being a native speaker, and a teacher trainer (Mr. Sully) who helps him prepare to teach.

I find this to be a brilliant book for anyone who teaches English to German speakers, a German speaker who wants to brush up on her English, and English-speaking expats living in German-speaking countries. Since Goodreads doesn't allow half-stars, I gave it four because of a few glitches I would consider mistakes: 2-3 typos, an incident of "There's a bunch of students...", and the translation of "No, really" as "Nicht unbedingt" (not really). Those are minor, but in a book about language, I'd rather there were no mistakes. And yes, I realize that is pedantic.

The conversations are mildly amusing at times, realistic in that they get off topic briefly now and then, and enlightening. The teacher's explanations are simple and easy to follow, and I like the way he leads Barry to his own understanding by asking "checking questions" and making mistakes Germans commonly make, getting Barry to correct him. Then they discuss why something is correct or incorrect.

The genius of this book is in its bilingualism. I have taught German to many Americans who are not experts in their native language. For a student of German reading this book, when he comes to a complicated construction ["If I had known how difficult English grammar was I wouldn't have taken this bloody course."], he can look on the right-hand page and find that sentence in German [Hätte ich gewusst, wie schwierig die englische Grammatik ist, dann hätte ich diesen verdammten Kurs niemals belegt."] That construction is called "third conditional," by the way, which is something a TEFL teacher (Teaching English as a Foreign Language) needs to know!


The grammar topics covered in the book are:

Lastly, the two characters use idioms throughout the book that are interpreted very well, which language learners can adopt. Idioms are fun! "You're pulling my leg!" Every native English speaker knows what that means, but a learner of English would picture the action literally. The German equivalent is (this was new to me) "Willst du mir einen Bären aufbinden?" An English speaker learning German would see that as "Do you want to untie a bear on me?"

Both characters are British, so there are several moments where American readers will wonder. Here's one example where Barry corrects a "mistake" Mr. Sully makes:

"Does [your sister] go to school on the weekend?"
"You mean AT the weekend!"

I even learned some things I didn't know before. For instance, English is one of the few languages with two forms of the present tense (p. 60). Can you name them or give examples? I also learned how to explain the subtle difference in meaning between "I work at McDonald's" and "I am working at McDonald's," which is something I'd never thought about before.


"I think you'll find [German learners of English] are very smart people, and many new English teachers get eaten for breakfast by German students who know a lot more about English than their English teachers." ~Mr. Sully (p. 198)

Posted by Ami im Schwabenland at 10:11