The Trouble with Melchior

A friend of ours recently told me about some news out of Ulm. The Ulmer Münster is a Protestant minster/cathedral and boasts the tallest church steeple in the world. I’ve climbed it (there is no elevator) plenty of times with our exchange students during the summer exchange. The news is that the figures of the Heilige Drei Könige (wise men) are being removed from the Nativity Scene this year due to controversy over Melchior, the African wise man, and the debate over racism.

Traditionalists, mostly white, will roll their eyes, scoff, and shake their fists in outrage because the Magi belong to the Christmas story as much as Jesus, Mary and Joseph. Some say the wise men - they were not kings, but rather astronomers - are meant to represent Europe, Asia, and Africa. Around the end of the 15th century European artists started depicting Melchior (Americans say it's Balthazar) as a black African. Many have come to consider this more authentic than versions of all the magi being white." In fact, though, all we know from the Bible (Matt 2:1-12) is that the wise men came from "the East."

So why are the Heilige Drei Könige being booted out of the crib in Ulm? Not having interviewed the dean of the Kirchengemeinde and only having read a few articles in German and one badly translated into English about it, I admit this sounded odd. I don’t think it’s racist to depict one magus as having dark skin if we are agreeing he was from Africa. But then I had a look at a photo of the figure in question. It can be found here or here.

The figure was created in 1920 and looks to me like a ridiculous caricature of a black man the likes of which racists of the 20s would find amusing and the rest of us disgusting. I have seen serious and respectful paintings and sculptures of the Heilige Drei Könige, and this is not one of those.

And what’s with the pretzel? That’s not controversial, it’s just weird. Melchior brought Myrrh (or is it frankincense, who knows when we can’t even agree upon which magi was African?) and a Bavarian pretzel to the Christ Child?

Each year on Dreikönigstag (January 6, the official end of Christmas) children in many towns in southern Germany go from door to door dressed as the magi, recite a poem or sing a song, collect for a children’s charity, write a blessing on the door frame and usually receive fruit and chocolate treats to boost them on their journey. This nice tradition is not without controversy because some church organizations (not the one in our village!) feel it is necessary to put one child in black face to represent Melchior. Never mind that girls often portray the kings and don’t have to bind up their hair and paint on beards to disguise themselves as men. Never mind that we can all pretty much figure out that these children are not really the actual wise men or authentic actors portraying them and don’t need one of them to charcoal his or her face for us to understand who they are supposed to be. 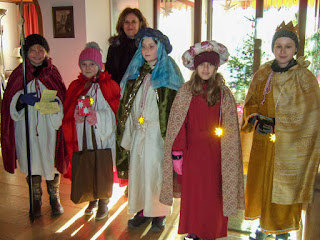 The tradition continues in many communities, however, and it seems many do not understand that black-facing white children is, to say the least, not appropriate in this day and age. No one can convince me of the necessity for black-facing a child or that the figure of Melchior I saw in that article above was an attempt at an authentic and serious depiction of a wise man from the African continent.

Personally I think it’s time for white folks to stop excusing black face and vaudeville caricatures of black people as “no big deal.” Look into the origins of this and how it has been used. It is not a gesture of respect or an honoring of African culture or people. It was and is a way of mocking them. I don’t think church groups who organize the children for Dreikönigstag and have black-faced one of the children are intending to mock Melchior or black people in general. I think they do it out of ignorance and a sense of “that’s how we’ve always done it, so what’s wrong with it?”

It is long past time to stop.

By the way, I have re-read the only Bible passage in which the wise men are mentioned. We've made several assumptions about this story that have become "Christian tradition," so don't come at me with "But that's what the Bible says!" Matthew never tells us there were three wise men, only that there were three different gifts. The wise men are unnamed, and Matthew only tells us they come from "the East." Most of Africa is west and south of Bethlehem and Jerusalem and even the horn of Africa is more south than east. There's nothing wrong with depictions of Melchior as a wise black man, but there is a whole lot wrong with black-facing children and having a figure that looks like a gollywog in a nativity scene.

Are there more important issues to address regarding racism and its prevalence in our societies, churches, and neighborhoods? Absolutely. But for mercy's sake, people. Some thing are pretty easy and need no debate.

Posted by Ami im Schwabenland at 14:36