What a year this has been, eh? To be perfectly honest neither M nor I have minded the 1,5-meter-Abstand (6-feet distance to others), the masks, washing our hands frequently (please tell me this is not new for you either), avoiding large gatherings, or not using public transportation. We're homebodies anyway, and when we choose to be near others it is because we've decided those people or that activity is important enough to us to be there. We haven't seen my Schwiegermutter since Easter, which is extremely unusual for us, but she's been up North with her daughter and grandsons as well as having spent some time in the hospital (non-Covid-related), where we weren't allowed to visit her due to Covid restrictions. We stay in contact by phone or email.

Cases are on the rise again in Germany but some of the restrictions have been eased or lifted since the early days. Masks are still required in all stores and shops Germany-wide as well as when entering public buildings and restaurants. We've been in the Bürgerbüro (citizens advice office) a few times lately, and we can only take off our masks at the desk of the person we've come to see if s/he has a plexiglass divider between us and him/her. No one goes anywhere anymore without a mask, and instead of decorative things hanging from people's rearview mirrors, there are masks.

In the big cities there have been demonstrations against all these measures intended to keep us healthy and out of hospitals, and I will never understand those people. Gives me yet another reason to be glad to have settled in a small community. Honestly, people!

I thought it was high time to write a life update and let my readers know I'm still around, so I'll get on with it.

After passing the third and final part of my Jägerprüfung, I applied for and received 5 weeks later my Jagdschein (hunting license)!! This was quite exciting, especially now that we're both Jungjäger. 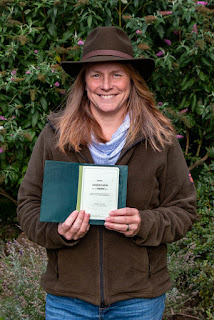 With my Jagdschein in my hand I was able to apply for my WBK, or Waffenbesitzkarte (gun license). We already had two Flinten (shotguns), both of which are on M's WBK so they officially belong to him. My WBK was ready within two weeks, just in time to get my Büchse (rifle) properly registered in my name. Our Schießtrainer picked up our Büchsen when he drove to the Heym company in Thüringen with two other students, and we drove to his home that evening to retrieve them.
Remember when I wrote that after I pass my test I will never shoot again? Yeah, well...that turned out to be untrue. We practice at a shooting range in Stuttgart once or twice a week, and we are seeing some improvement. This has become a skill we want to improve, and perhaps one day we really will go hunting.

One of the days we were there our Schießtrainer said, "Ami, mach den Keilernadel jetzt." The Keilernadel is a small shooting test one needs to pass each year in order to be eligible to participate in a Drückjagd (driving hunt) as a hunter-shooter. You have to shoot 5 times at the standing boar and 5 times at the running boar both at 50 meters free-handed, and you need to get above a certain score. I passed it on my first try, as did M. Since then we have seen seasoned hunters have a go at the Keilernadel and not pass on their first try. That speaks to what we've heard quite a few times - that Jungjäger (new hunters) are sometimes better shots than seasoned hunters because we've recently had such intense training.

So according to what's on paper, we are eligible to participate as shooters in a Drückjagd this year. As I've been told, you don't gain experience as a new driver by taking the bus while your car sits in the garage.

On Tuesday evenings I team-teach with a partner a German class called Deutsch Spezial, which is intended for native speakers and non-native speakers who struggle with reading and writing. There are no tests and there's no textbook - we just use our creativity and ask the students what they'd like help with. We sometimes split into two groups and other times we all work together. It's a small class, intended for no more than 10 participants so we can give them the individual attention they need.
I am still jumping in as a substitute at the local VHS when they need a replacement for the regular teachers, and although I sometimes have to be spontaneous and once last week had to go in blind only knowing which book they were using but not where they were in the book, I have enjoyed it every time. I must admit, I really do love teaching German and especially to adults. I think the students see that I enjoy teaching them, and they seem to enjoy it as well.

On an absolute whim one day after seeing a commercial for the umpteenth time, I signed up for Hello Fresh, the meal ingredient delivery service. I wanted to be forced to try new recipes and I liked the idea of not having to go to the store except for bread and wine. The meals were...fine. I did it for two weeks, listening to M grumble the whole time though he helped me by always doing the meat. We never had that "Wow" feeling one should experience sometimes, and there is way too much plastic since everything they send is pre-measured and packaged separately.
I'm not sorry I tried it, and my curiosity is satisfied. But we don't need to continue it. 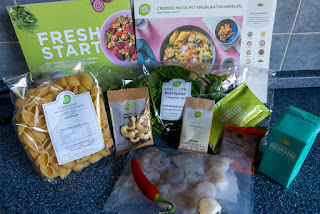 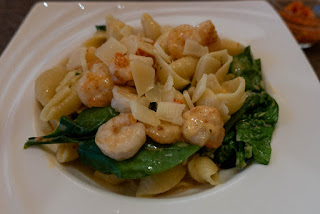 For the second year in a row M and I are participating in "Sober October." The idea is to give up drinking any alcohol and instead learn something new. We're cheating a bit on the "new" part of learning since what we're learning (see below) isn't exactly new for us. But since everything we didn't know before is certainly new, this works! Admittedly I enjoy a Gläschen Wein in the evenings while reading or watching TV, but I'm finding I'm going to sleep earlier without it. I think this will remain an October tradition for us.

We have a new car. It's a Jaguar I-Pace, and fully electric. They installed a charging station at M's company a few months ago, and since the office is within walking distance of our home, charging is pretty convenient. There are all kinds of pros and cons to electric cars which I'm not going to get into, but for the type of driving we typically do (rarely more than an hour from home and most often less than a 10-minute drive), an electric car works well. 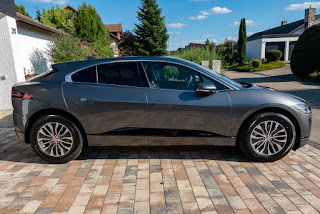 If you've been a long-time reader you know I have always hated driving here, at least driving more than 10 km from home. However, in the weeks leading up to my shooting test I needed to drive myself to Stuttgart and Esslingen for gun handling training and shooting practice. I was nervous at first, but I had no choice but to do it. Being forced to drive in whatever conditions the Stuttgart Autobahn threw at me turned out to be a good experience. I still don't drive willingly, but I know that I can handle it if I must. All of that driving was in our "old" Audi, but switching to the Jaguar has not been a problem.

My whole reason for going for my Jagdschein was so that I could then take another class and test to become a Falknerin (falconer). That course begins later this year and lasts eight days, followed immediately by the test. M is doing the class and test with me, so with enough hard work and studying, we will both soon be Jungfalkner! 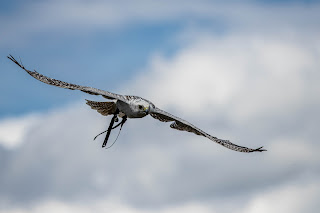 For several weeks I've been meeting once or twice a week with a Falkner who lives not far from us to study. He's been helping me so much to understand what lies ahead, what having a Beizvogel (hunting bird) entails, important laws to be familiar with, and much more. I've learned the Falknerknoten (falconer's knot, which is tied using only one hand), details about the relevant Greifvögel (birds of prey) and their prey, the latin names of the birds, the special Falknersprache (falconer's language) and Federkunde (feathers).
People keep asking us what kind of falcon we'll get later, but we're not that far in our plans yet. It probably won't be a falcon at all, because they're not really beginner birds. Perhaps a Habicht (goshawk) or two Harris Hawks. I'd still love to have a Steinkauz or Waldkauz, but we'll see.

Not much to say besides "God help us all!" At least not much that's printable. The shit show going on in the US is exhausting to follow. The "debate" was a national humiliation and I am left completely baffled that anyone can still support that insufferable manchild. But support him they do. He's the messiah of the GOP (Grand Ol' Party, or Republicans) and they support him with either their rapturous jubilation or their silent agreement. I'm disgusted. I may not be thrilled with Biden as the only other viable choice, but we need relief and Biden is a decent person who will surround himself with good people, not just loyal bootlickers. He believes in things like science and climate change and heeds the experts. And he will not selfishly endanger everyone around him to satisfy his indefatigable ego. The democrats want the kind of future I want to leave to my children.
I have printed out, completed and asked our Schießtrainer to witness my absentee ballot, and I sent it to Wisconsin - by mail. Now I have to wait and see if it arrives and gets processed. Here's hoping...
I have agreed to write a column for the local paper about US politics from an expat's point-of-view, which is both exciting and a bit scary. My first piece (about absentee voting) will appear in tomorrow's paper!

I've got a new alarm tone on my Handy (cell phone), which makes me smile rather than thinking "damn alarm!" (Not for children's ears!) Someone edited clips from Bret Weinstein and Heather Heying's podcast and turned it into this song, and I begged M to put it on my phone. Now this wakes me up from naps, reminds me it's time to start dinner, and gets me up early when I have to teach. I should probably set a different alarm tone when I'm out of the house! LOL
That's roughly it for now. I hope you are all weathering the pandemic and keeping healthy. Keep your wits about you, practice self-care, and we'll get through this. We've got a ways to go, but let's hang in there!
What have you been up to lately?
Let me know in the comments or share a link to your blog!
Posted by Ami im Schwabenland at 20:38