One of the reasons we like to go to Scotland is that we enjoy hiking. Not like the hardy locals, I guess - whose definition of hiking is much more radical than ours. We like to go for long walks that result in great views and photos. We learned this time that strenuous is definitely ok as long as we have a good guide to help us along. We still grumble a bit about our embarrassing failure in 2015 of hiking to Speinne Mor (the highest point of north Mull) but turning back after sinking thigh-deep into a bog.

However, on this trip we did several familiar hikes and one new one. For Liv they were all new, and it was fun to have a first-timer with us on the island.

On our first evening at Glengorm, all three kids (and I say "kids", but they are all over 20) took off after unpacking to walk to the coast. I can't blame them at all, but they misjudged how far it was and realized they should have brought water and a snack! 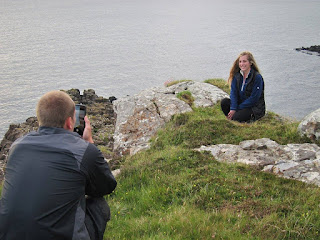 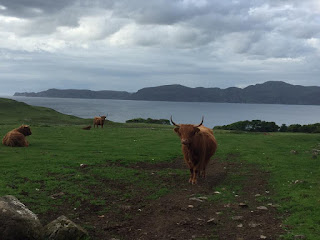 On our first morning the kids slept in more than we did, and M and I set off for our first walk. We walked to Laorin Bay and were rewarded with seals! OMG, they are so cute! Granted, they didn't do much other than float, sink, and pop their heads out again to watch us watching them. But still... It was our first sighting of seals in five visits to the island. 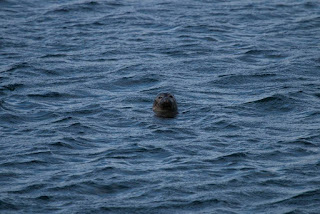 In the afternoon the kids wanted to join us for a walk, and since by then it was raining, we all geared up with our best waterproofs and set off for the nature hide on Loch Mingary. While there we saw several red deer including a fawn, a bunch of birds (I don't appreciate the species as I should), more seals, and lots of rocks that pretended to be otters as well as waves that acted like whales.

By now I am fully convinced that there are actually no otters on Mull. We tourists are lured by tales of otters that used to make regular appearances, but they've all moved on to quieter and more private places. I don't know why they are so appealing - technically I think they are sea weasels. But they're adorable and I have found them so since I was young! Maybe it's a conspiracy, and the otters only show themselves to the locals and those they deem worthy.

A few days later four of us went on a 6-hour hike to the crater loch, S'airde Beinn. We'd arranged this hike with Kerry, Glengorm's ranger. She packed a lunch for each of us, and we set off at about 9:15 from the castle. We walked first along a comfortable road, then up the side of a waterfall, across two bogs, up a very steep hill, and we at last reached the crater loch. 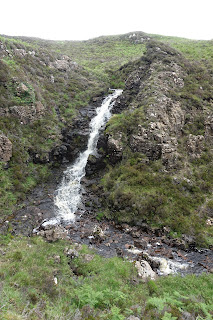 We unpacked our lunches - delicious sandwiches and lemon cake from the Glengorm Bakery in Tobermory - and found rocks to sit on, the hill partially protecting us from the strong winds. Then Kerry gave us three options for the return:

Of course we opted for #3! This brought us more steep bits, though usually going downhill, boggy bits, another waterfall, two deer, and several types of birds including hen harriers. We had to navigate around piles of coo poo and leap over a small stream, and at one point Al observed that the castle didn't seem to be getting much closer. We were tired by the end, but we all agreed we'd do it again. 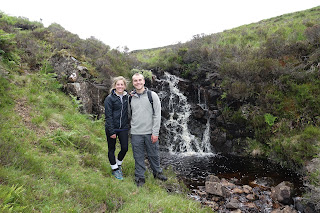 Kerry was a great guide, and if you are ever on the north end of Mull, we highly recommend arranging a hike with her. This one was six hours long, but she does shorter walks as well. She gives tons of information about the flora and fauna found on the estate and the island as well as Glengorm history, and she even offers a seaweed foraging course!

There is much to be seen at Glengorm, and visitors can walk all over regardless of whether they're staying on the estate or not. There are common sense rules to follow, some of which are
Dun Ara is an ancient hill fort right on the seashore, and when you're at the top you can still see the stone "bricks" once used for the fortress.

The Celtic Pool was originally a natural harbor for galley boats used by those at Dun Ara. Apparently a pier and slipway are still visible if you are more observant than we are. According to The Story of Glengorm by Janet Nelson, one of Glengorm's former owners, Mrs. Lithgow, suffered from arthritis and regularly bathed in this pool in hopes that the cold sea water would provide some relief. Since then it's been called "the bathing pool."

The standing stones at Glengorm were found during excavations and set upright in their current positions. We put our hands on the stones but were not transported back to 1743 Jacobite Scotland, which was just fine with us. (reference to Diane Gabaldon's Outlander) 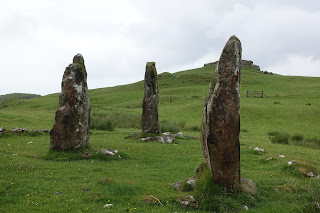 The day before we left the island, M, Steph, and I drove to the starting point of the Ardmore Shore walk, which is 6 km from Tobermory. It was again drizzling, so we were bundled up in waterproof pants and jackets. It rained for pretty much the whole walk. It was an easy walk, though, on a forestry track and well-groomed and freshly mowed path.

It's a walk to the sea and another nature hide at Ardmore Bay, through what used to be forest and past two abandoned villages. It's a nice two-hour walk that includes the sea, bracken, Foxglove, wild orchids, a little stream and waterfall, and possibly some wildlife. On a clear day you can see the islands of Skye, Rum, Coll, and Tiree.


One of the best things after a hike is sitting in the Glengorm Coffee Shop for a snack (they have "life-changing" cheesecakes almost every day, according to my kids) and a cappuccino. It warms the insides while you rest your tired feet. And you don't even have to feel guilty about the calories because you just burned off so many by hiking!

Previously in this series:
Midges and Memories
Logistics
Accommodations

Posted by Ami im Schwabenland at 13:57