Traveling with young adult children is fabulous! They can go off on their own including exploring a biggish city and navigating public transportation, make their own plans, have their own fun in the evening when all M and I want to do is sit with a glass of wine and not be responsible for anything, and they help with cooking and clean-up without being asked.

What kind of entertainment did we (and they!) find throughout the trip to keep everyone happy? I've already written about the castles and castle ruins we visited. But what else did we see and do?

We took a wildlife boat tour from  Tobermory to the islands of Lunga and Staffa. Fingal's Cave is on Staffa, and it's a geological wonder. So beautiful and inspiring is it that Felix Mendelsohn composed his "Hebrides Overture" after visiting the cave in the early 1800s. 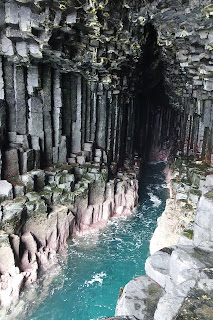 After disembarking from the boat adventurous visitors walk up some steps and along the volcanic wall gripping tightly to the rail or rope, and eventually come to this cave. The basalt rock formed into hexagonal columns when lava from a volcanic eruption cooled abruptly millions of years ago. The cave was (re-)discovered in 1772 and has been a popular attraction for nearly 200 years. 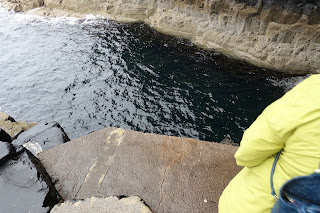 This is how one approaches the cave. There is a rope to hang onto on the cave wall side, and nothing but thin air to keep you from tossing over the side into the icy ocean water. And it is quite a long way down. It is both exhilerating and terrifying. 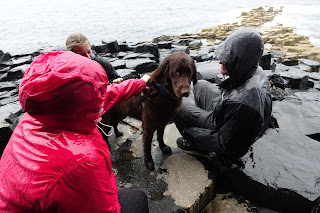 Side story: This is Gus. Gus is a Curly Coated Retriever and he is not happy. Gus' human was attempting to navigate that precarious pathway into the cave holding onto Gus' leash with his infant child strapped to his back in a baby carrier and a big camera dangling from his neck. It was pouring down with a relentless, windy, thick, misty rain, making the path even more treacherous. Gus' other human was already in the cave, and Gus was pulling to hurry his human, baby, and camera along. As the human hesitated and started to doubt the wisdom of his next step, I asked him if he would like me to hold the dog while he explored the cave (I was on my way out). He said, "Oh, I don't want you to have to stand here in the pouring rain!" There was no shelter anywhere on the island anyway, so whether I held onto Gus or headed back toward the boat that was no longer at the dock, it didn't make any difference. So he handed me the dog's leash with a grateful look, said, "His name is Gus. He's a good dog!" and disappeared while Gus shot me a "What the hell?!" look and pined after his humans.

My three dog-loving kids came out of the cave to find me hanging onto Gus, and they made instant friends with this dog who didn't want anything to do with them. We crouched down to lower our center of gravity (Gus is a strong dog!) and held on while being pelted with rain. His grateful humans, including the infant who I'm sure was also thinking, "What the hell?!", returned and Gus breathed a sigh of relief before marching off with them with nary another look in our direction.

Once back on the mainland, M drove us along single-track roads from the western-most point of the UK (Kilchoan at West Ardnamurchan) to Glenfinnan (or Gleannfhionnainn, in Gaelic). Here we had planned to see the Glenfinnan Viaduct as well as the monument to the Jacobites.  Unfortunately, the weather sucked and I just wasn't in the mood. My daughter snapped this decent photo, but we didn't wait to see if a train would pass over on it.
There's a nice visitors center there with plenty of information presented museum-style about the Jacobite uprisings. Here is the viaduct on a nicer day from a different perspective, when we rode the Jacobite Steam Train in 2007: 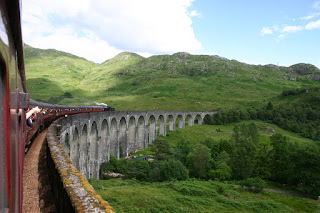 We've been hearing about the Falkirk Wheel for years, but I never really looked into what it was. We had a lengthy stop here because it's where our rental car finally gave up the ghost, and we had to wait several hours for a tow truck. Better here than in the middle of the motorway, eh? 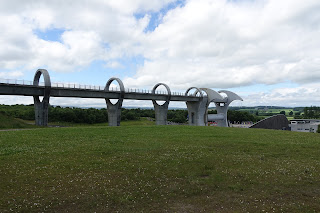 The wheel works as a lock - boats navigating the Union Canal and the Forth and Clyde Canal drive into a caisson which is then sealed, and the wheel turns, lifting or dropping the boat and caisson to the other canal. The energy used by the wheel is equivalent to eight electric teapots.

The visitors center offers lots of information, and visitors can buy a ticket to ride a boat on the wheel from bottom to top or vise versa. It truly is something to behold. 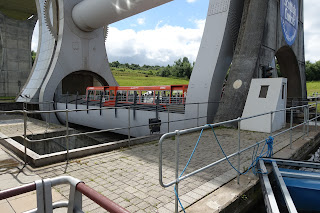 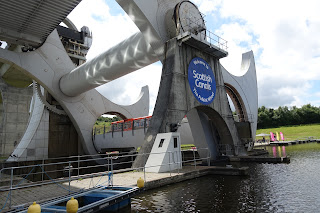 On the way to Edinburgh from Falkirk, we saw the Kelpies from the cab of the tow truck - we would have otherwise stopped there as well, for another attraction.

With my next Scotland post I'll write about the attractions we visited in Edinburgh.

Posted by Ami im Schwabenland at 14:10