For me one mark of a good book is that I am genuinely sorry to finish it. Erzähl mir von Deutschland, Soumar, by  Florian Schmitz was such a book for me. 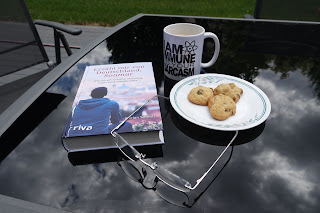 There was so much in this book I could relate to, and it was probably good for me to see Germany through a German writer’s critical eye. I see my own passport country through a similar eye, and I get the feeling I come across as unpatriotic to other Americans. I even lost a friend once, who, just before signing off, wrote something about me hating America. I love and value my American friends very much, but I do not have a positive impression of Americans in general, nor do I consider the U.S. the "greatest country in the world" as so many do. It’s a strange reverse-xenophobia.

Florian Schmitz is a German who, after his studies with a degree in Literary Studies and Spanish, got the message from Germany (the Job Center advisors, for instance) that “We don’t need you.” He had the wrong skill set (at least on paper) after graduation to be valued by German employers, so he left the country and moved to Greece. Throughout the book Schmitz compares life, culture, and people in Greece to those in Germany, and through Soumar, his Syrian friend, we hear comparisons between Syria, Germany and Greece. What I find so interesting is that Soumar sees Germany in a more positive light than Schmitz does, although Schmitz comes across to me as realistic, not negative.

Soumar was on his journey/flight from Syria to Germany in 2016 when he and Schmitz met through Schmitz’s people-magnet dog, Nondas, on a Greek ship. They stayed in contact, and this book describes Soumar’s journey in four parts, their friendship, and their conversations about topics like religion (they are both atheists), war, humanity, integration, food, football (soccer), weather… The book allows readers to eavesdrop on conversations between two people I would enjoy spending time with. They ask each other deep and difficult questions, and the answers are equally deep.

My book is all marked up with notes and underlined quotes, such as:

A southern European’s advice to Germans:
“Zieht euch endlich den Stock aus dem Arsch und macht eure eigenen Regeln.”
["Get that stick out of your butt and make your own rules!"]

At the same time, German punctuality and organization is good!
Soumar: “Es ist gut, dass man sich auf Leute verlassen kann.”
["It's good that you can rely on people here."]

Soumar on religious strife:
„Wenn jemand denkt, dass ein anderer dumm ist, weil er eine andere Religion hat, dann hat er diese Dummheit selbst in sich.“
["When someone thinks that someone else is dumb for practicing a different religion, then the stupidity lies in him."]

Life in a refugee camp:
“For a few days it’s ok, but for years it’s terrible…Can you imagine? It can’t be compared to a concentration camp like Bergen-Belsen, because the people can come and go, have enough water and a warm meal. But to be constantly surrounded by people is not good. One never has peace and quiet or any real privacy, and everyone has to share the kitchen and bathroom. When people are forced to live like that, no matter where, eventually there will be problems.”*

[*Some people in both Germany and the US have said refugees living in camps should be happy they’re out of the war zone. They should feel lucky to be where they are. Ok, but I wonder how long the people saying that would be able to stand conditions in a refugee camp. One day, perhaps?]

And one of my favorite exchanges (the one at the top of this post):
Schmitz: „Describe home. What is that?“
Soumar: „A place where you feel safe. You go there when you're tired or want to be alone. Then you can go home and do what you want. You can relax. And everything belongs to you - your bed, your sofa, your table, your TV, your books.“

Soumar tells the story of his three-week odyssey from Damaskus to Bremen in his own words, and it is much like the stories several of my former students have shared with me. It’s becoming very familiar to me – the fear, the uncertainty, the smugglers and traffickers, the police, the maltreatment by police and officials in Hungary, the boat motors that konk out in the middle of the sea, the exhaustion, the relief upon reaching a Greek island, the hunger and thirst, lack of showers, the understandable mistrust, the connections made with other refugees and information shared via Facebook of where to go and whom to look out for, crossing borders under the cover of darkness…and the “Alter, du hast es geschafft!” upon finally reaching Germany.

I think this is a very important book and I wish it were available in English. Anyone who wants to lump all Arabs/Syrians/refugees together into one pot and label them should meet Soumar in this book. I recommend it to expats, travelers, immigrants, wanderers, those living in multicultural families and communities, and anyone wondering what struggles refugees, immigrants, and expats face from day to day.

On Goodreads I gave this book five stars, which for me is rare. But if I don't like the beginning of the next book I have lined up, I might just start this one from the beginning again.

Posted by Ami im Schwabenland at 15:08