I took the German Telc (The European Language Certificates) test today - level C1, which is the level one would need to pass in order to study at a German university. I took the test because passing it could enable me to be certified to teach Integrationskurse (integration classes for foreigners)  in Germany. The results won't come in for about four weeks, so by the time they arrive I will have forgotten about the test. At least it's behind me.

What a strange position to be in - as  teacher of beginning German courses (both back in the US and more recently at the language school here in Horb) I have written and graded many tests, but I haven't taken a test in a good many years! I haven't missed that old once-familiar feeling of tightness in the chest, a queasy stomach, a fuzzy head, and that voice inside screaming...


For the love of God, do NOT embarrass yourself!!

It's crazy the number of things that can cause a person Prüfungsangst, or test anxiety. Usually it's feeling unprepared, something unexpected coming up the morning of the test, not sleeping well the night before, realizing your lucky shirt is in the wash, or oversleeping and having to skip the most important meal of the day. For me it was one little thing: a pencil.

I HATE writing with a pencil. The sound of that lead pick scratching on a piece of paper is like fingernails on a chalkboard to me, though ironically the fingernail thing doesn't bother me, I can handle a very sharp pencil for a few moments, but after no more than 8 words, I need to sharpen it. Today I had to fill in 75 little scan-tronny bubbles (not a problem, though I can only hope I pressed hard enough for the grading machine to read my answers) and then write 350 German words with that damn pencil. Thank goodness my tinnitus is loud enough to deaden the sound somewhat, but I would have paid money to be allowed to use a pen.

You might wonder how I felt about the test, or rather my performance. The parts I was worried about - writing and speaking - went much better than I thought they would. My nervousness was caused by doing several practice quizzes and not being thrilled with the topics about which I was instructed to speak or write.

Example: Read the following quote, and then talk about it. What does it mean? Do you agree? Give reasons and examples."

The quote: "Tourism is a danger to the environment!"

The other part of the speaking bit is to make a presentation about a topic they give me. One does get a choice between two, and I know they are supposed to be so general that everyone could speak about at least one of them, but I saw enough samples of topics I could not speak intelligibly about.


Topic: "What is the national sport of your passport country?"


WELL... the gods smiled on my sorry soul today, and I couldn't have picked better topics for myself. I had to write about teaching and learning (basically "discuss" in an essay whether it's better to learn with fun and games, or with hard work and discipline). I've got plenty to say about that, so I had no problem getting to 350 words (except for that damn pencil scratching a hole through my skull!).

One of the two speaking topics was to discuss a work of literature and why I consider it important. Seriously?? What better question could an English teacher and avid reader ask for?? Here is a topic about which I can speak confidently, and even with enthusiasm!! I chose The Prophet, of course, and I could have rambled on for hours a while about it.

The quote I had to speak about was something like, "Money gives you independence, but realizing you can live without money leads to freedom."  I lucked out with this quote; my partner had one that I didn't even understand!

The listening section was the worst for me, probably because each thing we had to listen to was only played once. I should have practiced that more, especially the part where I had to listen to a presentation and take notes on slides where information was missing. I basically missed one entire slide. The topic of that exercise wasn't one I know or care much about, which also makes it difficult to listen carefully.

It was good for me as a teacher to be in this position of having to take a test to judge my language ability. I should be able to give my students better advice from this point on, and I also know now which kinds of activities to practice more in class. (Sprachbausteine*, I'm looking at you!!)

*Sprachbausteine is on page 12 of the practice test I've linked to below. It looks easier than it is.

If you're a German learner and want to try your hand at some stuff you're supposed to know in order to do well on the C1 test, check out this site, or this one. And here is one of the practice tests. I am more than a little pleased to be able to say that I don't have to spend any time on those sites tonight.


I'll end by saying that M and I spent last weekend at the Bodensee for our 10th anniversary, and because this test was coming up, I brought my grammar books along. We had a wonderful dinner at a restaurant right near our hotel, which our neighbor recommended. This was the Porterhouse* steak I had, but the reason I'm posting it here is explained below: 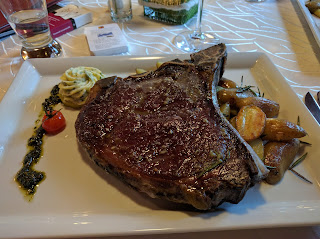 Just beyond the plate is a pile of German grammar cards, which I was going through before the steak arrived. I found this handy, discrete little box of cards at some shop in the town. That's right - on our anniversary weekend, I didn't buy a new blouse or a pair of earrings. I bought a pack of grammar cards. This will not surprise my family. Nor will the fact that I actually enjoyed going through them and testing how much I know.


I'll let you know when I get the results of the test. Or maybe I won't. I guess that will depend on how I did.

*Although the restaurant called this a Porterhouse, I know it isn't (at least not in American terms), They also offered a "T-Bone mit Filet (Tenderloin)", which is actually what we Amis call a Porterhouse. The steak I got was without any Filet/tenderloin at all, which actually makes it a "bone-in strip steak." I didn't hold that against them - it was delicious!
Posted by Ami im Schwabenland at 19:02