Proud to be an American?

Today is the 4th of July - the USA's Independence Day. I think it's a strange day for many US-American expats. We're used to having the day off as well as an excuse to party with the neighbors. There's usually a parade during the day and fireworks at night. Americans all around the country are wearing their Old Glory t-shirts and patriotic flip-flops, and the radio stations play and replay every patriotic song they have on file.

Over here in southern Germany, school is still in session and it's a regular working day. It's easy to forget it's such an important day in the US.

As I was baking chocolate chip cookies yesterday morning to give to my students as a 4th of July treat along with some little flag decorations, I started thinking about the idea of being "proud to be an American."

The short version is that I am not. But the opposite of proud is ashamed, and I'm not that either.

A number of years ago, I asked M if he was proud to be German. His response was something I'd never considered before, but it made a lot of sense to me: "Why would I be proud of something I had no control over?" He said he can feel proud of something he accomplished, or an ability he has, or reaching a goal, but being born German was not an achievement. It was dumb luck.

I am proud of my ability to speak a second language tolerably well and make Bratkartoffeln, I'm proud of working to overcome enough of my fear of driving in Germany to be able to drive to and from Esslingen when I must, I'm proud of my children and their accomplishments, and I'm pleased and proud to be able to say that my students seem to think I'm a pretty good teacher most of the time.

The reason I'm an American, though, is because I was born to American parents living in America. I'm no prouder of that than I am of my blue eyes and "dirty-dishwater-blonde" (now graying) hair, or that I am 163cm tall. That's just the way it is, and I had no say in the matter. I am American through no effort on my part. Am I glad I was born into this American family? Definitely! I have lived a very privileged life and can complain about nothing. I have always had a place to call "home" and clean water to drink and bathe in, my parents saw to it that I had a great education, I've had a job when I've needed one, I have not had my home devasted by bombs, I have not had to live in a refugee camp, and my country is not under attack. I was lucky to be born in America.

I don't understand, though, why so many seem obsessed with being "proud to be an American" and shaming those who don't feel the same way. "America is the greatest country in the world." Oh really? What makes it so? Because Americans say it is? Because America ranks fifth on the "Countries with the highest quality of life" scale? I actually think Germany is pretty great, and Scotland too. What makes a person go around saying the country s/he was born in or lives in is the greatest in the world? Isn't it enough to say you're glad you live in America and are happy there?

The only time I've heard a German say that Germany was the best was in a song by die Prinzen (which I happen to love) dripping with satire and irony.

Flying the flag is cool if that's your thing, but it's not mine and I won't fly it except for fun. (We don't fly the German flag either - we're just not flag-flyers.) If we ever have a July 4th theme party, I've got plenty of things in the basement for decorating. But it's unseemly in Germany to fly national flags except during a soccer tournament. Nationalism is frowned upon here, and that's fine with me. The only time you can find German flag themed items in a store is during an international soccer tournament. The display offers all kinds of fan articles as long as Germany is still in the tournament, but as soon as they're out or they've won, POOF! the stuff is gone with shocking swiftness. When our village flies the German flag at the town hall, there is always a notice in the local newsletter several days beforehand explaining why the flag will be flown. At the town hall. Imagine Americans feeling the need to explain why they're putting up the flag when they do so. Imagine a governmental building or school in America without a big American flag out front. It's inconceivable.

I'm wearing my American flag t-shirt and earrings today (but also my Germany bracelet because we beat Italy on Saturday in the European Championship quarter finals!!), I'm bringing American flag napkins along for serving the typical American cookies I baked, and I've written a trivia game for my Englisch-AG students about the USA for class today. 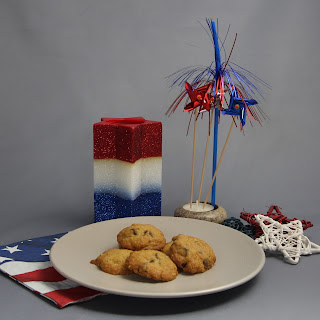 It's all in good fun, and I am using the American holiday as an excuse to bring in a treat to share. But please don't ask me if I am proud to be an American. I don't need to be proud of something I didn't accomplish.

All the same, I wish my fellow Americans a Happy Fourth of July!!

Posted by Ami im Schwabenland at 08:43