Seven months ago I gave up driving in Germany except for a few places near our home to which I have to drive - like the grocery store and the local Bahnhof. I ended that blog post with a picture of a sad puppy because puppies make everything better.


Last week we got a new car, and yesterday I decided to try it again (it = driving). The mere fact that I did drive the 14 km (8.7 miles) from home to Nagold on a new (for me) road is reason enough for me to feel good. Then M took over as we meandered through the Schwarzwald, often behind cars driving as slowly as I was on the way to Nagold, but I also drove the 14 km home from Freudenstadt.

Yesterday morning I was all...
Still a little freaked out, but willing to consider another step.

The key to being suddenly willing to drive those harrowing 14 km is apparently having a car with an automatic transmission. That's a bit silly since I've owned nothing but stick-shift cars since 1998, but whatever works. It's one less thing to think about while driving, so that's probably the difference.


The issues and fears I still have to face and overcome are...

My depth perception has never been great, so the narrow roads seem even narrower to me than they are. As I've written before, there are no comforting shoulders on the sides of roads, but rather thick wooden posts, ditches, curbs, stone walls, cliffs, or rocky crags. 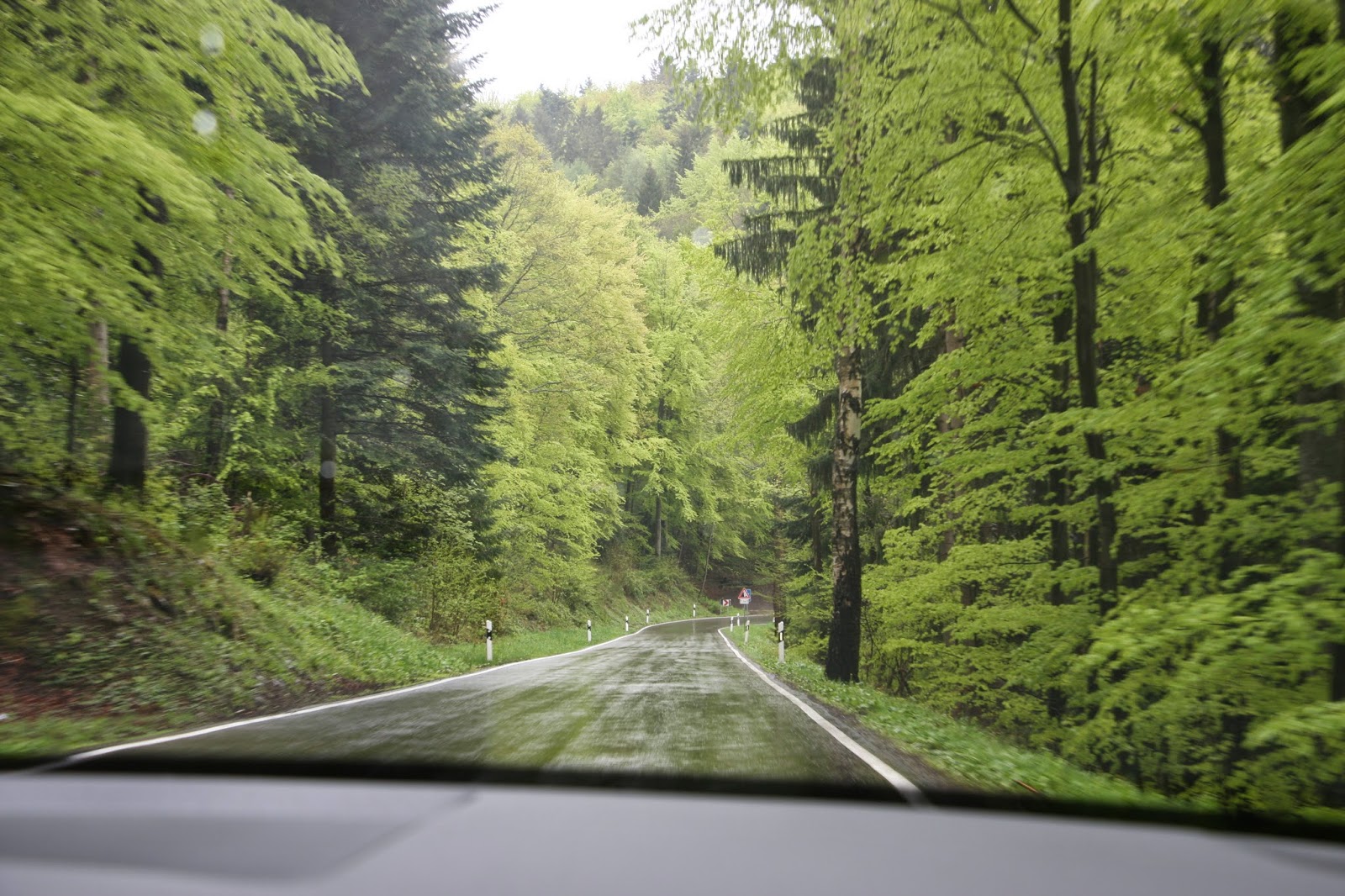 Isn't that pretty? Notice this particular road is too narrow for a painted center line. I do realize you can't see how narrow the road is, but according to road width minimums, it is probably 5.5 meters wide (18 feet). It really does feel like 30 seconds into this clip from The Holiday.

This nice wide road with a painted center line below is a whole meter wider - 6.5 m (21 feet). Please, someone in Wisconsin, go outside and measure the width of the street in front of your house where the speed limit is 40 km/h (25 mph), and let me know what it is curb to curb. 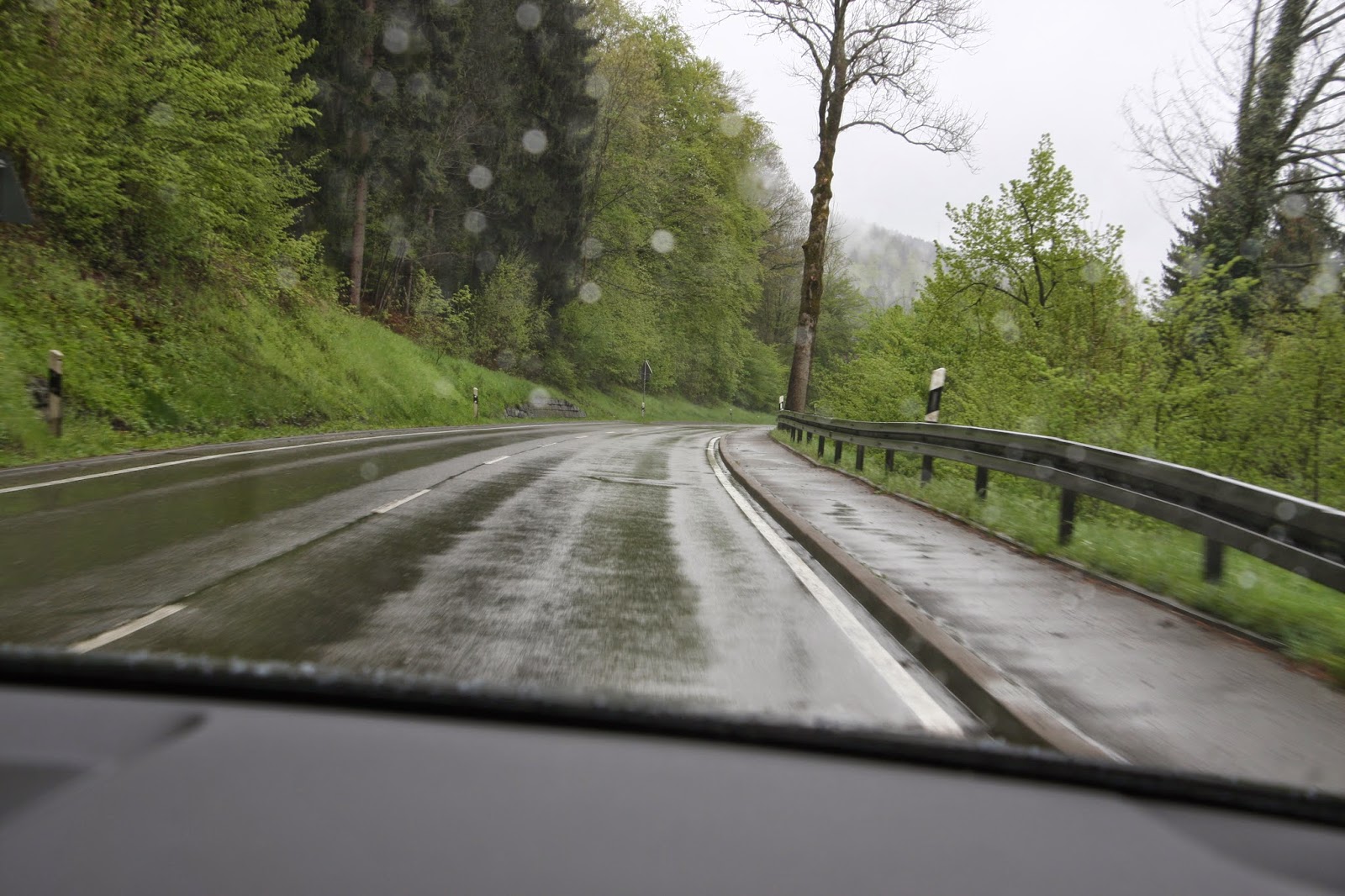 Notice the curb and sidewalk right at the edge of the lane. If you flinch, you tear off a wheel or screw up your alignment. M's solution?  "Don't flinch."  Speed limit here is also 100 km/h whether or not pedestrians are present.

It rained the whole time we were out today - one of those steady, dull it's-going-to-rain-ALL-DAY-LONG rains. Maybe it's because I'm getting old, but visibility was not great, the windshield wipers were distracting, and oncoming cars were noisy. Which brings me to...

See, if all roads in Germany were one-way roads, I'd be much more comfortable. The way it is, though, oncoming cars are part of the game. They usually stay in their lane, but you can't completely rely on that - especially in curves, and especially the big trucks. I hold my breath when we pass oncoming cars whether I'm driving or not if we're going faster than 50 km/h (31 mph), or, when I'm not the one driving, I use my "anti-panic glasses" (close my eyes). Those are most helpful.

The slightest flinch with oncoming traffic could cause a terrible accident. So again - "Don't flinch!"

I honestly don't know how people get comfortable with this.

Blind curves at 50 km/h (31 mph) are not a problem at all. We've got four or five of those in Wisconsin, as well. But at 100 km/h, they feel suicidal. In a forest. In the rain. On a road too narrow for a painted center line. With possible oncoming traffic. 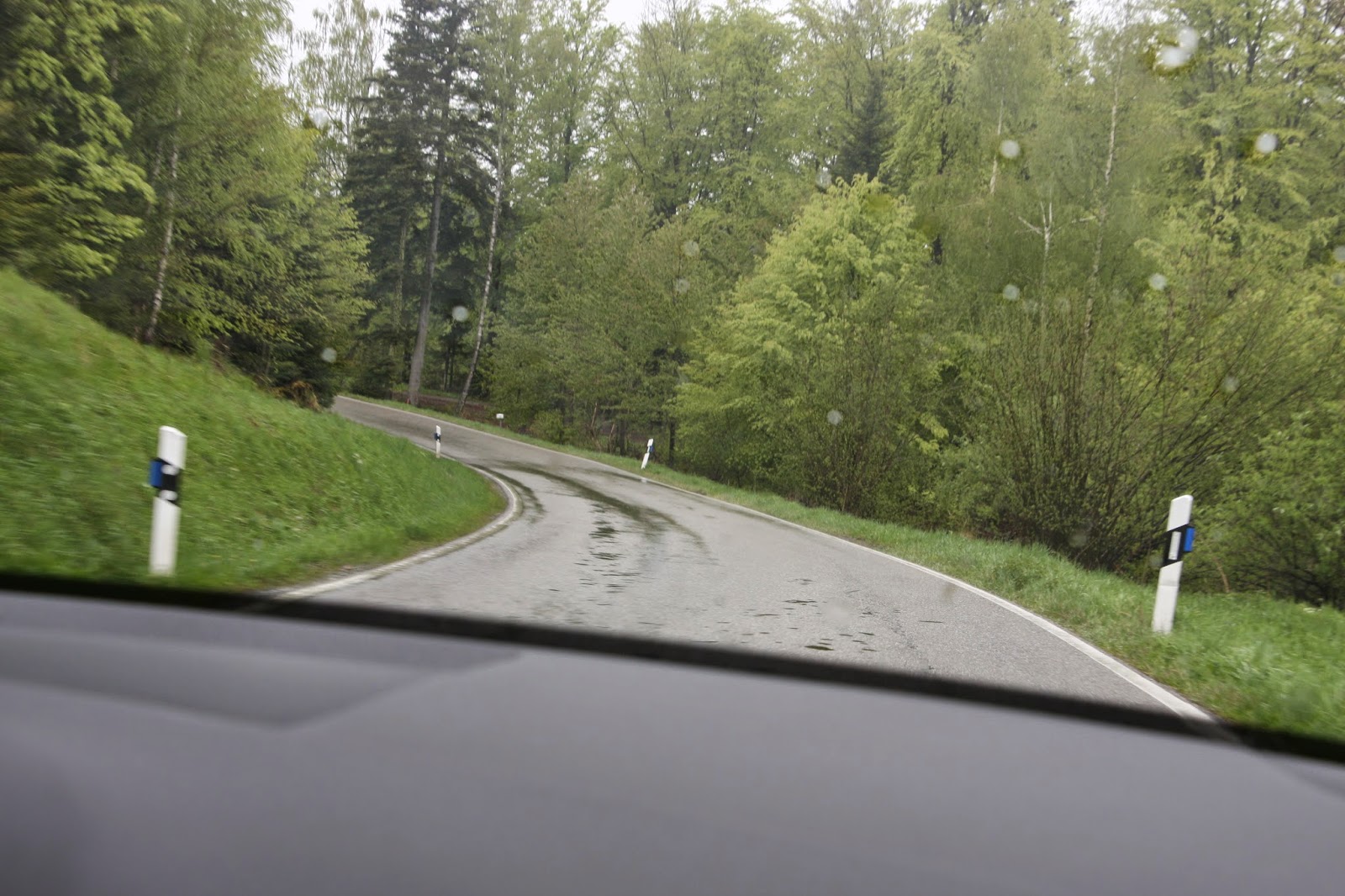 Admittedly, while the speed limit here is 100 km/h, M was not driving that fast around this blind curve. I don't know how fast he was going because I put on my anti-panic glasses right after I took this picture. He drives very sensibly, but a hell of a lot faster than I do.

At one point on the windy road down into the valley on the way to Nagold, I dared to glance at our Navi/GPS to see what the speed limit was. I was going what felt like a daring and slightly reckless 60 km/h (37 mph) with no one behind me. "You cannot possibly tell me that the speed limit here is 100!" Indeed it was.

To make this clearer to my American readers, where I felt like 37 mph was fast enough for the narrow curvy road, the posted speed limit was only slightly below the fastest speed allowed on Wisconsin freeways. Freeways.

Maybe that's one of my problems - in the U.S. the posted speed limit says, "If you can't go as fast as 55 mph on this road, you probably shouldn't be driving here." Here in Germany the posted limit says "If you're not going at least 100 km/h, you're going to have someone tailgating you who will probably get impatient enough to overtake you in a dangerous spot and cause frayed nerves or a bad accident, so get your ass moving. P.S. Don't flinch."

I don't know how it will go from now on, but things are looking up a little. I can at least get to two nice towns within 10 miles from our home without having to rely on the bus. With a little more practice, who knows what's possible?

Oh, and M told me afterwards that I did fairly well this time. So now I'm all...

At least I'm still on my feet.

Posted by Ami im Schwabenland at 08:55